Sorry to leave your inboxes empty last Friday, but rightly the focus very much wasn’t on economic policy. The missing TOTCs would have covered the new Prime Minister’s very large Energy Price Guarantee, the full Resolution analysis of which is belatedly now out for the keen among you.

The unprecedented running together of big political and constitutional change has made Westminster feel very odd indeed this week, with some beautiful public moments of reflection on a life of service happening alongside the, more private than normal, business of a new government taking shape.

That continues next week, which is bookended by the Queen’s funeral and the Chancellor’s mini-Budget. The latter doesn’t look remotely mini given the huge tax cuts involved, and badly needed detail still to come on energy support for business and Northern Ireland. So, expect a later than normal TOTCs, as the spreadsheets whirr in Resolution towers to bring you the details of what’s been announced.

Have a good weekend – whether you’re a grateful subject queuing to celebrate the Queen, or a banker celebrating your soon to be uncapped bonuses.

Magic monarchy. Monarchists among you – if you’re the constitutional kind – may know the research out there showing such arrangements are associated with faster growth because constitutional monarchy puts limits on the nature of political competition/behaviour (e.g. underpinning stable property rights). Note the majority of long-term successful democracies in Europe are monarchies – we are very much not alone. But I thought you’d enjoy a 2021 Slovenian paper that argues we’ve got this all wrong – monarchies don’t cause growth, growth explains the survival of constitutional monarchies. Republics turned up in Europe where countries were poor, or lost the world wars (obviously). Interesting, although slightly beside the point in determining many of our monarchist/republican views (I’m with Attlee in thinking the idea of politicians living in palaces is overrated).

Taxation talk. As we’re halfway through the Economy 2030 Inquiry, we’re obviously massively pro anyone stepping back to consider the big long-term challenge facing their country. So you should definitely read the report of the Irish Commission on Taxation and Welfare that emerged this week. It’s thoughtful, even if not massively original, in reminding those overseeing advanced (and ageing) economies that the direction of tax levels is up not down, which should encourage a focus on what good taxes look like. The detail of the proposals are specific to the Irish tax/social security systems, but the principles are of wider interest. They call for broadening the tax base (those of different ages and income sources shouldn’t be treated differently). Yep. Wealth taxes need to take more of the strain. Too right. And our tax system needs to recognise that net zero is coming – which means road user charging. It does. Another lesson? These kinds of proposals aren’t controversy free – Leo Varadkar (who is due to become Taoiseach again shortly) has dumped all over them.

Stunning ships. To make sure your productivity doesn’t rise once you’re bored of DCMS’s queue tracker, I recommend checking out a great visualisation of the (until recently) entirely ignored backbone of our globalised economy: ships. Shipmap is… a map of ships, using data from the UCL Energy Institute to create a time lapse showing ships transporting different types of goods around the world in 2012. It’s a good combination of hypnotic/interesting – until you notice the bit about how much CO2 these ships are emitting…

Boosting breakups. This is a nice bit of economic history. 1952 saw the break-up of Germany’s largest chemical company (IG Farben), motivated in large part by the corporate’s role in the Nazi war economy. What was the effect on innovation of breaking up such a dominant firm? Positive finds a new paper, with an increase in patenting in areas the giant had been strong in in both the successor firms and wider industry. Food for thought in current debates about whether superstar firms drive innovation due to their size/resources, or hinder it because of their dominance. And an important reminder of how good some breakups can be.”

Amazing agglomeration. Cities are productive places but they are also expensive ones (especially if you’re trying to rent somewhere right now). So when it comes to businesses trying to come up with new ideas what tips the balance: higher productivity or higher costs? Great new research comes out firmly on the higher productivity side of the argument in the context of R&D. It finds that adding more scientists to a city that already has loads of scientists raises productivity and costs, but the productivity benefits are far larger – in fact they are six times larger. Agglomeration is alive and well science wise, except in the very most expensive cities. As ever in life you can have too much of a good thing.

Many aspects of Queen Elizabeth’s reign are being celebrated, but we risk missing the big one: she oversaw the fastest economic growth of any monarch in Britain’s long past, and quite possibly any in our future too. COTW gives you the increase in GDP per capita from 1271 to the present day by monarch. The pre-Victoria ones are lumped together because growth wasn’t really a thing for most of human history. Elizabeth II didn’t just outlive and outreign Victoria, she massively outgrew her too: although the industrial revolution got going in the 19th century it’s really the 20th century where humanity’s growth escalator is humming (my discussion this week with economic historian Brad Delong on his great new book covers exactly this). With economists generally arguing the sustainable growth rate of the UK economy is now well below 20th Century highs, our new King may be worried he can’t match his mother on this metric (COTW shows the OBR’s current best guess of our future growth rates). But we shouldn’t fatalist about this new era – as we’ve covered before there is no reason we can’t out-perform the disaster of the past 15 years. The good news for our new King’s chances on this metric is that Liz Truss is rightly focused on raising the UK’s game on it. The bad news? Making that a reality requires a lot more than giving the Treasury a 2.5 per cent growth target 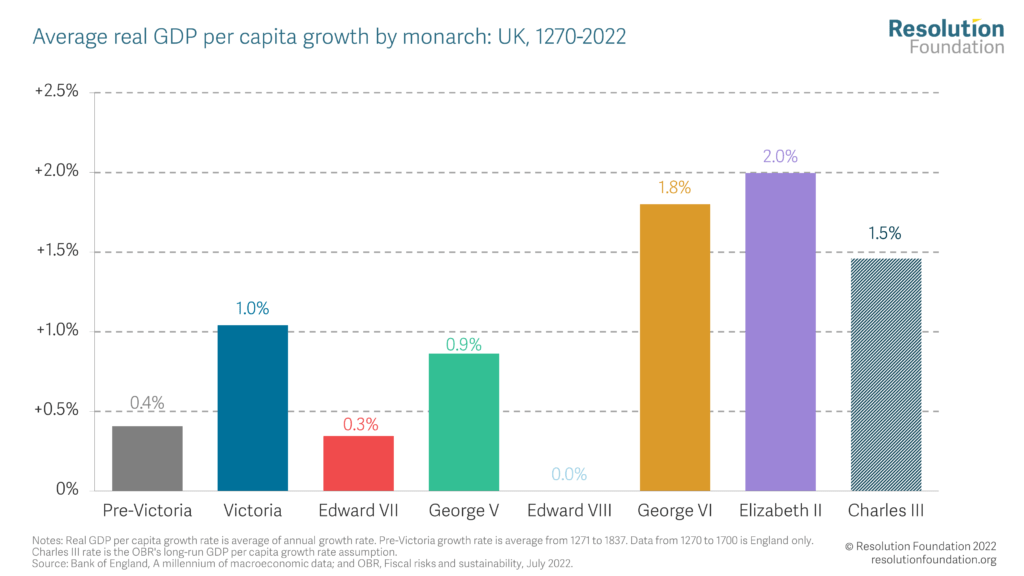