Rather than answering the big tax/spend decisions of this parliament it’ll be outlining the government’s economic reaction plan to the spread of Coronavirus – what might be in it is the topic of our first read, and a new RF report out tomorrow morning.

Have a good, handwashing-focused, weekend.

Virus response: Now, this is a medical crisis and the medical response is the priority. I’ve heard rumours we’re meant to wash our hands. But with workers stuck at home, people worried to go out and spend, and firms unable to get crucial supplies, we’ve got an economic hit coming. So what should the economic policy response be? Turning first to the Bank of England, read Tony Yates’ New Statesman article that takes apart the idea that this is a pure supply shock that monetary policy can’t do much about. Expect an interest rate cut on 26th March. The problem is not that the Bank’s bullets wouldn’t do some good, but that it doesn’t have many left. So what else needs doing? As Simon Wren-Lewis notes the crucial aspect of this economic shock is that it is temporary – which points to the crucial role of access to credit in ensuring it doesn’t lead otherwise solvent firms to close, turning temporary problems into permanent ones. The Bank and Treasury will almost certainly set out details for partially guaranteeing loans to firms via private sector banks next week. The Treasury should go further and set out immediate steps to ease the hit to incomes, along with providing guidance of how the fiscal response would be stepped up if things get worse. Our proposals are out tomorrow. For more cosmopolitan versions of this debate, see Claudia Sahm’s preference for the US government just mailing anyone getting the virus $1,000.

Confused economists. The anti-economists among you are going to love this. The Centre for Macroeconomics fairly regularly surveys economists about big policy-relevant debates of the day. Their most recent go this week asks the spreadsheet warriors what the cause of our productivity disaster is – a pretty important question. By far the most popular explanation given is weak overall demand in the economy “due to the financial crisis, austerity policies and Brexit” – far from uncontroversial at a time when the UK at least is at full employment. Things go awry when our collective economics hive mind is asked what the policy solution should be. While the lack of demand is identified as the problem, most think that doing something to boost demand is… not the answer. Which is odd.

Level this: What ‘levelling up’ actually means in policy terms is a crucial question for the government. Most discussions have focused on infrastructure spending, and in particular transport. Earlier this week we set out both the case for more capital spending outside London, given historic underspending, and how we might do it well (more transparency would help). But what about other areas of spending? Conservative MP Neil O’Brien argues in a new paper (summary) today that the same pattern of underinvesting in the Midlands and the North can be seen in other areas of spending – from housing to R&D and culture. Now the argument is stronger in some areas (transport) than others (housing – where there are reasons for spending more in high-housing-cost areas), but it’s a useful contribution to an important debate. If you want more on this the OECD gave us a detailed reminder that amid the towns vs cities debate today, the UK’s big cities outside London aren’t exactly booming (productivity levels are 14 per cent below the UK average). Our goal has to be more focus on Barnsley and Wolverhampton, but also on Sheffield and Birmingham too.

Predictive policing: Now there’s understandably lots of anxiety about algorithms these days as they infiltrate everything from our shopping to the music we listen to. But here’s some good news on the algorithm front – a new study finds they can help us cut crime. The research examines the use of ‘predictive policing’ in Milan. Looking at robberies of businesses over two and a half years the paper compares the two police forces in the city – the ‘Polizia’ who use data on past criminal events to try and predict the next one, and the ‘Carabinieri’ who follow more traditional methods. While the forces have no difference in productivity in terms of solving crimes for the first robbery committed in a series, the Polizia, using predictive policing, are 8 percentage points more likely to solve subsequent robberies. Why? Because criminals – like the rest of us – are incredibly predictable. They tend to select the same business types, time of day and city neighbourhood for their robberies. So good news for police productivity. Less good news for the productivity of burglars in Milan – but then again they should be in quarantine by now anyway.

Natural selection: How do we deal with ‘bad science’? That’s the topic for research published this week looking at… research. The paper warns that bad science is on the rise, blaming the pressure to produce ‘positive’ results, leading to labs with poorer research practices but more appealing research results out-competing scientists with more rigorous processes. The authors answer? They emphasise the importance of theory (so that people are testing the best, rather than the most newsworthy, hypotheses and avoiding ‘false-positives’), rather than the traditional focus on replication (which either doesn’t happen, or happens too late to make much difference). But rightly the authors note this is far from fool-proof, concluding that “bad science is always a danger”. So it turns out that some good old-fashioned British scepticism can help save science.

Yesterday the ONS released a treasure trove of data on household incomes. There was a lot to unpack – including how geographic income inequality divides have fallen since 2011, despite productivity gaps remaining stubbornly high – and the recent living standards disaster for the poorest households, driven largely by big social security cuts. This week’s Chart of the Week is my favourite for quite a while, taking a step back to look at the longer-term strength and distribution of household income growth. It crams much of the UK’s economy history over the past four decades into one chart. So what does it tell us? Typical households enjoyed strong (before housing costs) income growth over the course of the 1980s (around 28 per cent), but the rich raked it in (hence inequality surging). The 90s were like a toned down 80s – slower growth (16 per cent) and slower growth in inequality. The 2000s saw policy boost the bottom and globalisation boost the top, while the middle got squeezed. The last decade has basically been a living standards turkey for everyone, with the top hit hardest by the crisis, the bottom doing worst today and middle Britain being (relatively) protected. We’re always living with the past – but this should remind us not to assume that tomorrow’s problem will be the same as today’s. 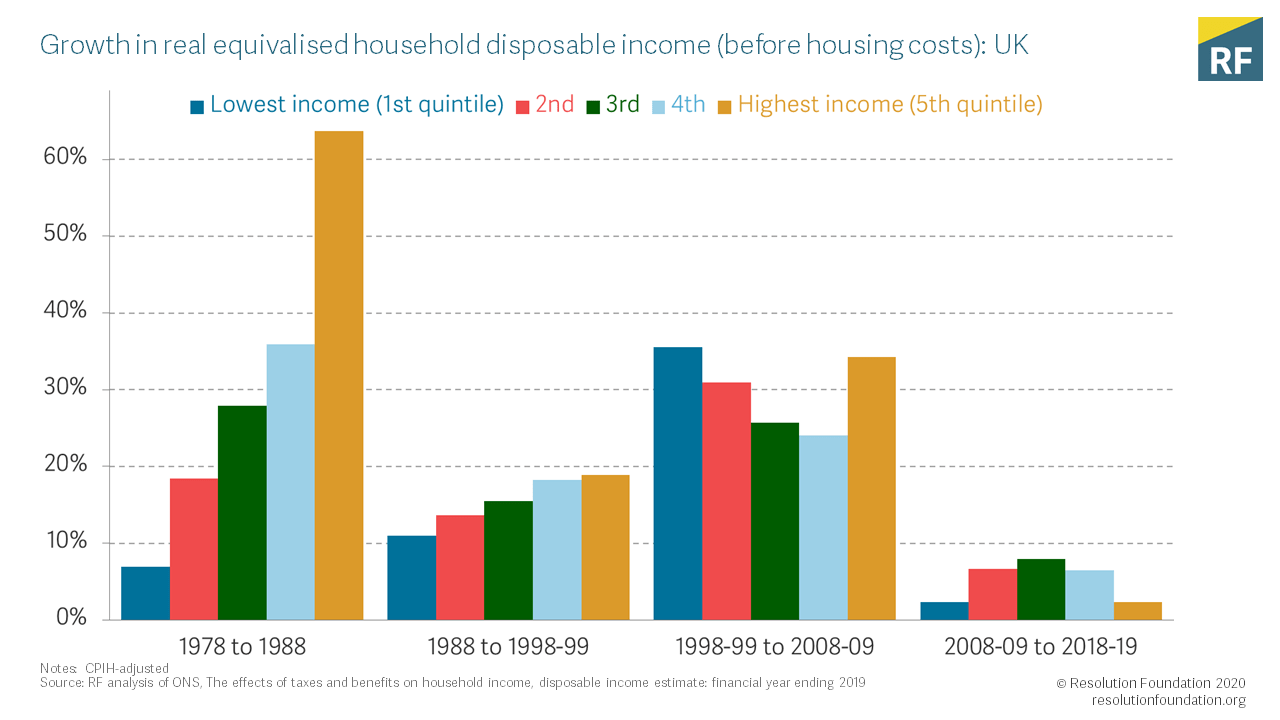