Unlike with employment or GDP, detailed data on disposable household incomes comes with a long lag. So today the ONS released its main household income results for 2018-19. There will be more data to come in future (including poverty numbers later this month), but what we’ve learned today is not reassuring about post-referendum living standards.

Confirmation of a weak ‘Article 50’ period, on top of the financial crisis

One striking finding in today’s data is that real mean disposable income (equivalised to account for family sizes, but before housing costs) was no higher in 2018-19 than in 2007-08. The typical (median) household income has performed only slightly better: now standing at around 6 per cent higher than in 2007-08, at around £30,000. As with the wage squeeze – where average pay has only just returned to its pre-crisis peak – this is a result both of the last recession and the period of high inflation that followed the Brexit vote: a double whammy for household finances. 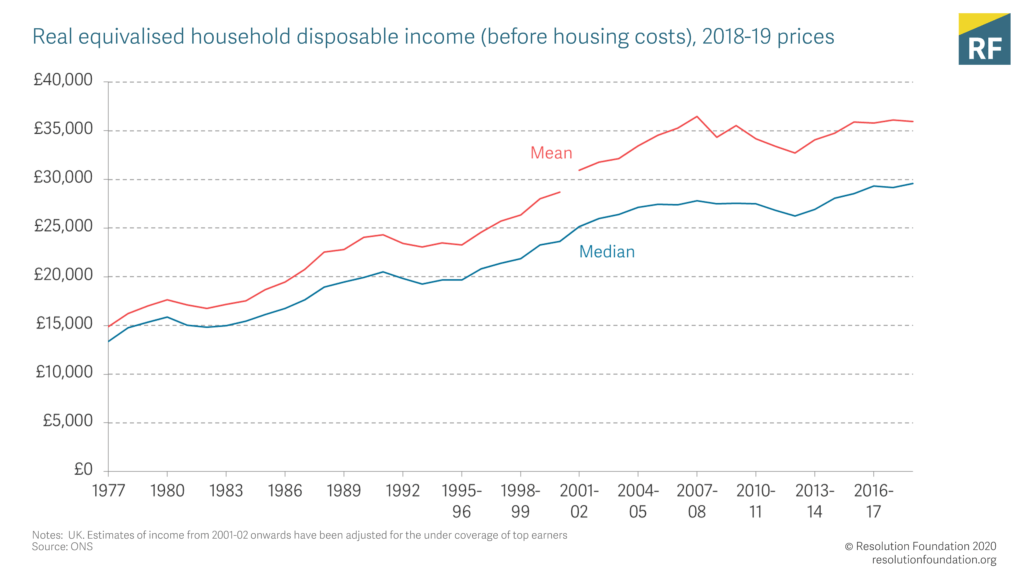 Of course, these averages hide a range of experiences. As we have pointed out previously, income growth for retired households has been stronger, with 26 per cent growth in their median income between 2004-05 and 2018-19, compared to only 6 per cent for the non-retired population over the same 14-year period. The divergence between retired and working-age household income growth actually pre-dates the crisis, especially with regard to younger cohorts. This insight, along with solutions to address it, was a major part of our recent Intergenerational Commission (with further research to be published later this year). 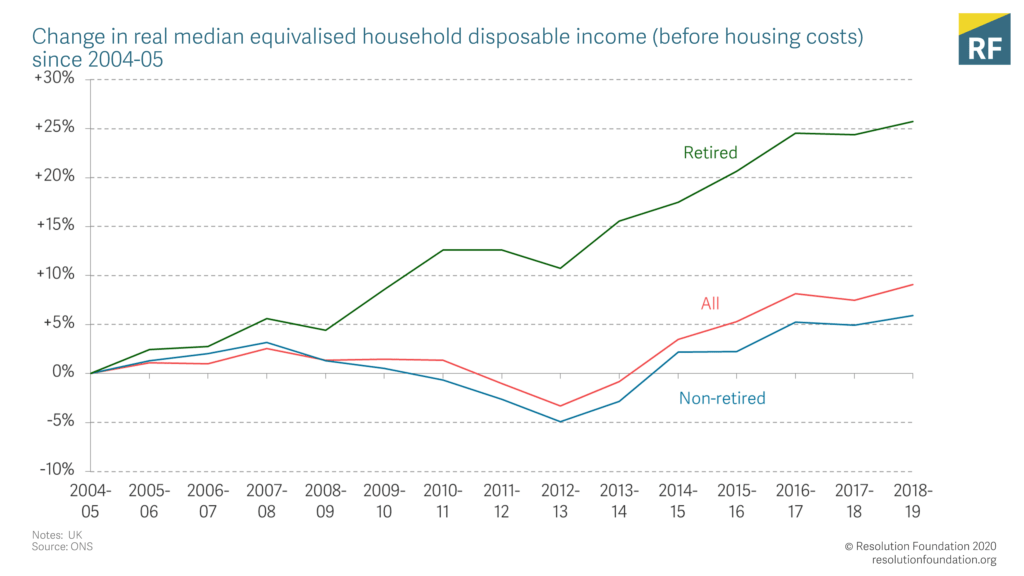 Real income growth of 6 per cent over a 14 year-period is an unprecedently poor economic performance for working-age households. If we look at 10-year growth rates over time, the 5 per cent growth of the last decade for the non-retired population compares to an average of around 30 per cent pre-crisis. That is a lot of lost growth. 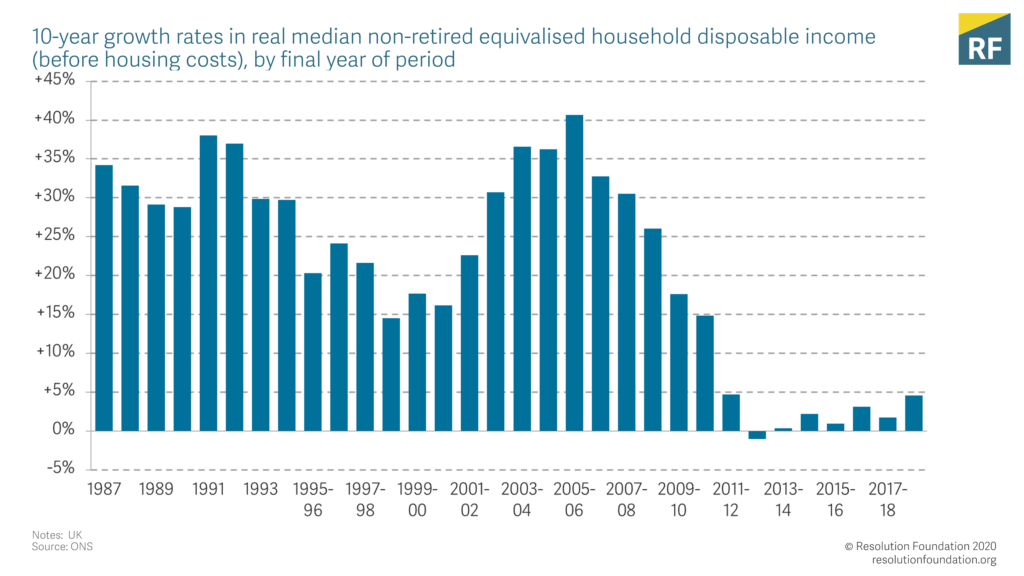 Having had a better financial crisis than the rich, the poor have gone backwards

A more optimistic take would be that the UK has just been unlucky twice, with the hit of the recession and then the hit of a fall in the value of the pound, but that these impacts are now behind us. The risk, of course, is that households might be unlucky yet again.

And that’s particularly true of the poorest. Today’s data shows that the income of the poorest fifth of the population was no higher in 2018-19 than in 2004-05 – and that’s despite not seeing the kind of massive income fall that the richest saw following the financial crisis. This worrying performance is partly due to a 7 per cent real income fall over the past two years. This data is not perfect, and some volatility should be expected, but this direction of travel is consistent with what we might expect given very large benefit cuts. In particular, the benefit freeze in 2017-18 and 2018-19 by itself cut the real value of most benefits by 5 per cent. With the benefit freeze having continued in 2019-20, and the impact of other cuts still increasing, it’s hard to conclude that the prospects for the poorest are set to greatly improve, despite positive news on employment and a rising wage floor. 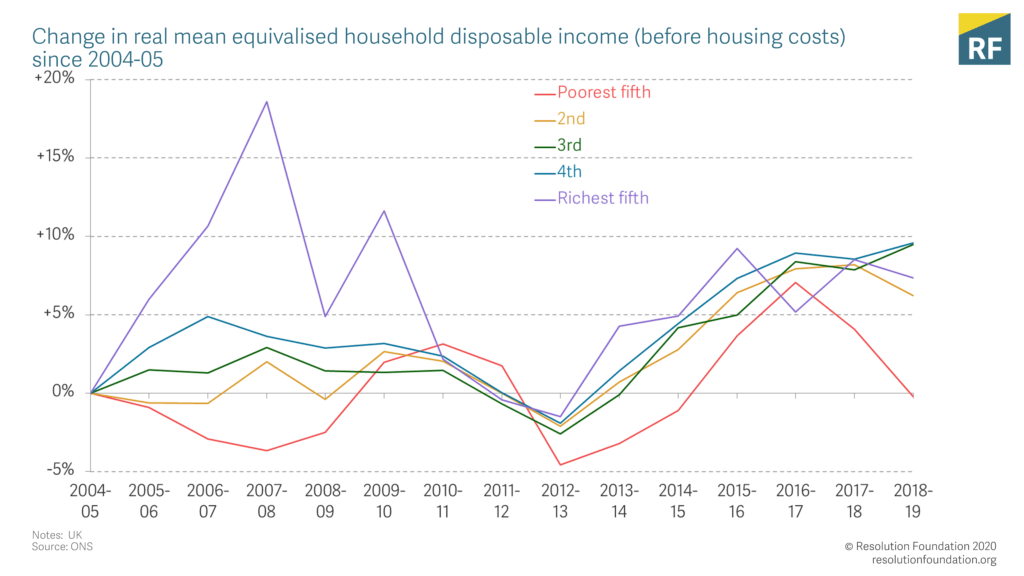 Beyond the poorest, the news on inequality is more benign. And indeed on the quality of the data itself there is good news, with the ONS having implemented an adjustment to top incomes to make use of HMRC tax data. This has brought the ONS’s inequality numbers into line with other sources. This confirms that relative inequality – as measured by the Gini coefficient – is roughly where it was in the early 2000s, or indeed the early 1990s. It’s worth adding however that absolute gaps between income groups have increased over time. 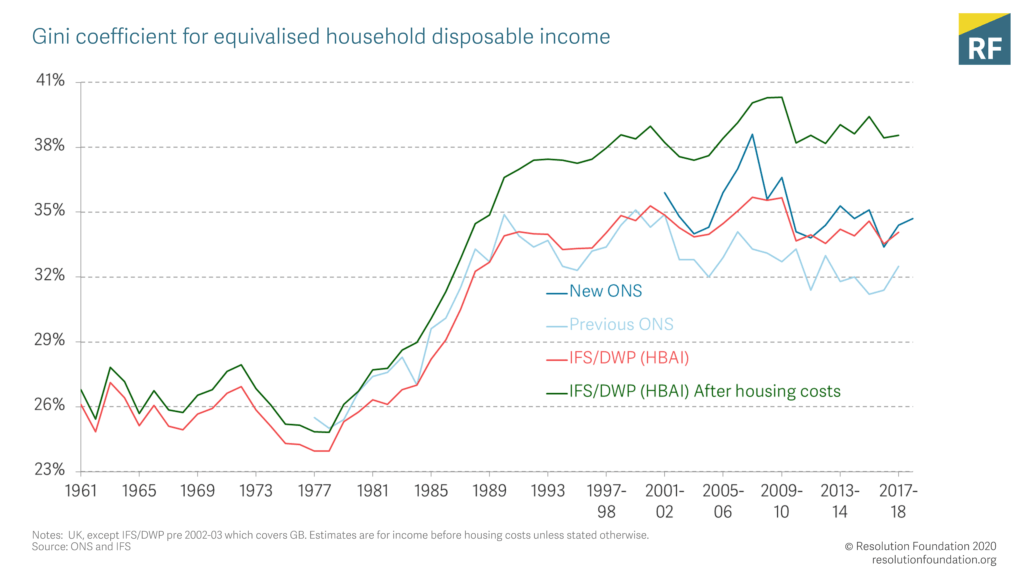 We should not lose sight of how weak the past decade or so has been for overall household incomes. We are still yet to see a return to the strong, sustained income growth of earlier periods.

And – while we seem to be stuck with high overall inequality – the specific inequality concern going forward should (as we set out in our last Living Standards Outlook) be that the poorest continue to fall further behind everyone else, as the reality of benefit policy choices makes its way – with that long lag – into the statistics. We will learn more when the DWP’s 2018-19 poverty statistics come out on 26 March, but so far it looks like the ongoing trend is quite the opposite of “levelling up”.

Postscript: It is not ideal that the ONS and DWP release two separate sets of household income and inequality National Statistics in the same month, no doubt with similar but not identical results.