Why are three million more of us working today than were back in 2008? How has our employment rate reached 76 per cent, when full employment before the crisis meant 73 per cent of us working?

These are employment levels no-one thought possible a decade ago. There is almost no bigger change to our economy over the past decade than its jobs boom. And yet it is poorly understood. 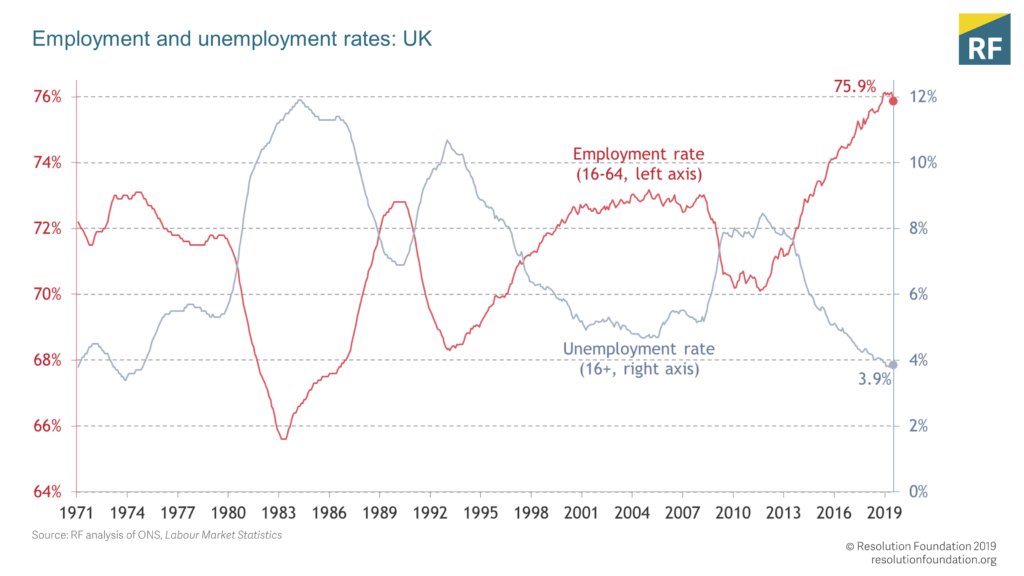 So why are so many of us working? Because we’re a lot poorer than we expected to be. That’s the fundamental cause of record employment.

Some have argued that actually policy changes are key. Conservative and Labour politicians, for very different reasons, like to say it’s because of the UK’s flexible labour market. It’s true that flexibility has enabled swift employment growth, and the less welcome rise in insecure work within it. But it cannot explain why more people are working today than before the crisis for the simple reason that the labour market is not significantly more flexible than it was in 2008.

Conservative ministers often say the jobs boom is because of Universal Credit and the better incentives to work it provides. But this rather misses the fact that the new benefit’s roll-out has been so slow that it only accounted for two per cent of the working-age population as late as 2018 – five years into the employment boom. 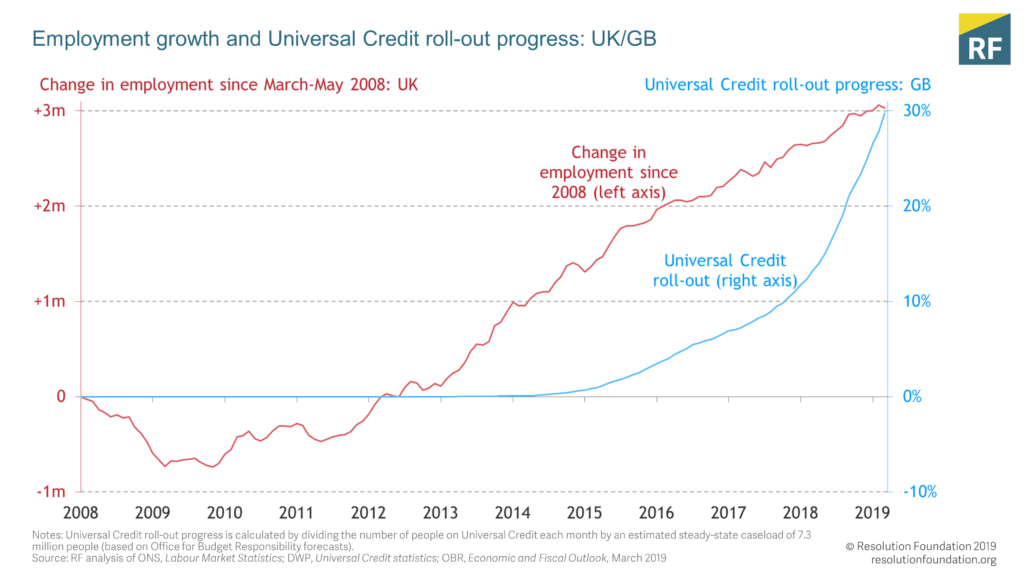 Better arguments are made by the Bank of England among others, arguing that firms have increased their demand for workers rather than machines. This might be because it has become relatively cheaper – after all real wages fell after the crash – or because post-crisis and pre-Brexit uncertainty means they’d rather take on workers that can quickly be shed, than machines that they’d be stuck with.

But an increase in firms’ demand for workers can’t be the main driver of rising employment – because that would drive upward pressure on wages. In fact, wage growth has literally not been this weak for generations. 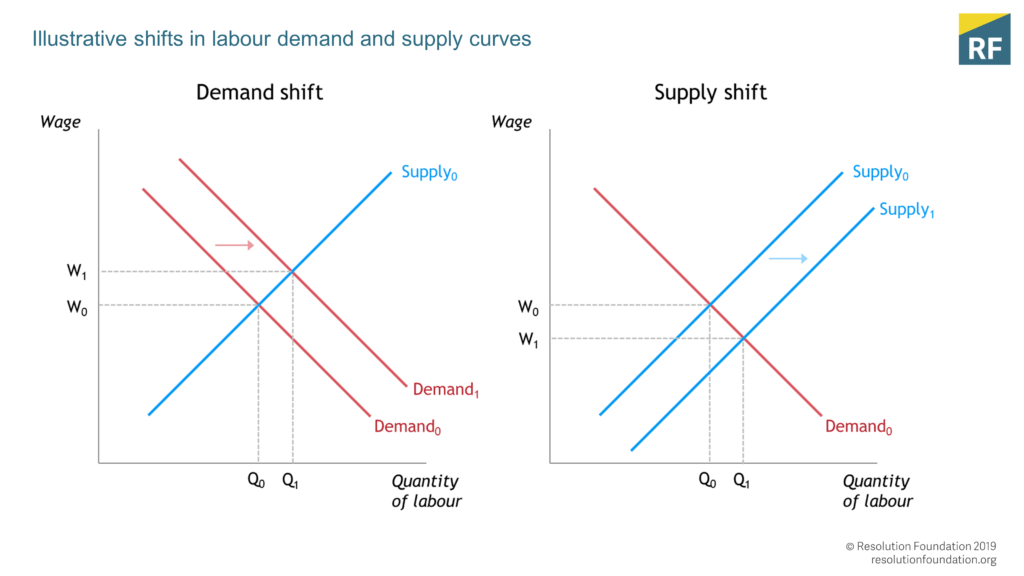 Instead an increase in labour supply by households – more people wanting to work, or wanting to work longer, for a given wage – is consistent with the twin features of our labour market: high employment and subdued pay.

Why might this have happened? Because a deep recession, huge wage falls and weak earnings recovery have meant household incomes being much lower than expected – and staying lower. A typical earner is today earning a fifth less than would have been the case had pre-crisis earnings trends continued. A rational response from households has been to shield family finances from the depth of such earnings reductions by trying to increase the number of workers, or working more hours. 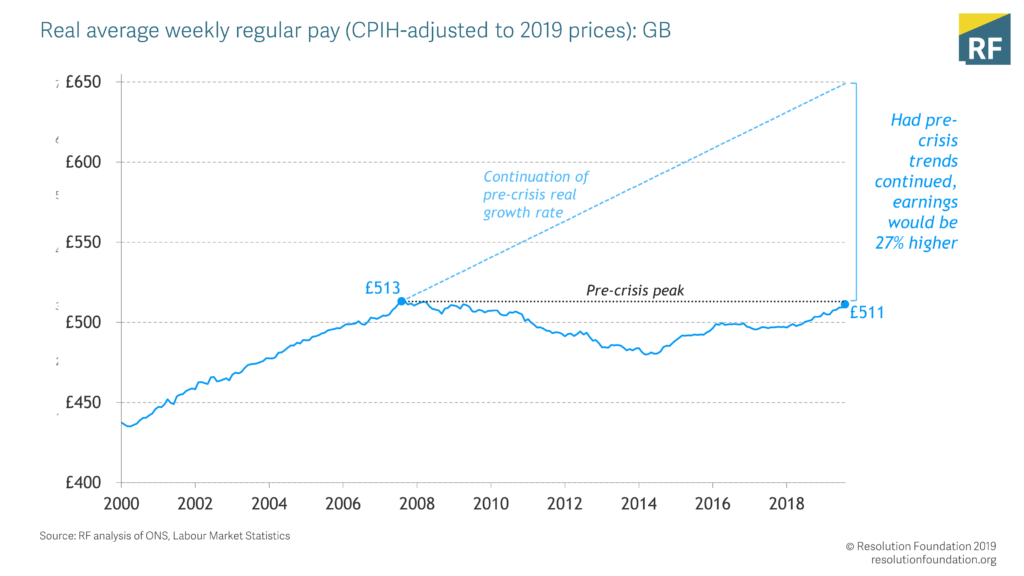 That’s the theory, but what’s the evidence?

First, we’re choosing to work more hours. The decades-long decline in working hours has stalled since 2008. Workers are putting in almost 30 million more hours a week than they be if the post-1980s trend for falling average hours had continued. And despite this, one-in-ten workers still wants more hours today. 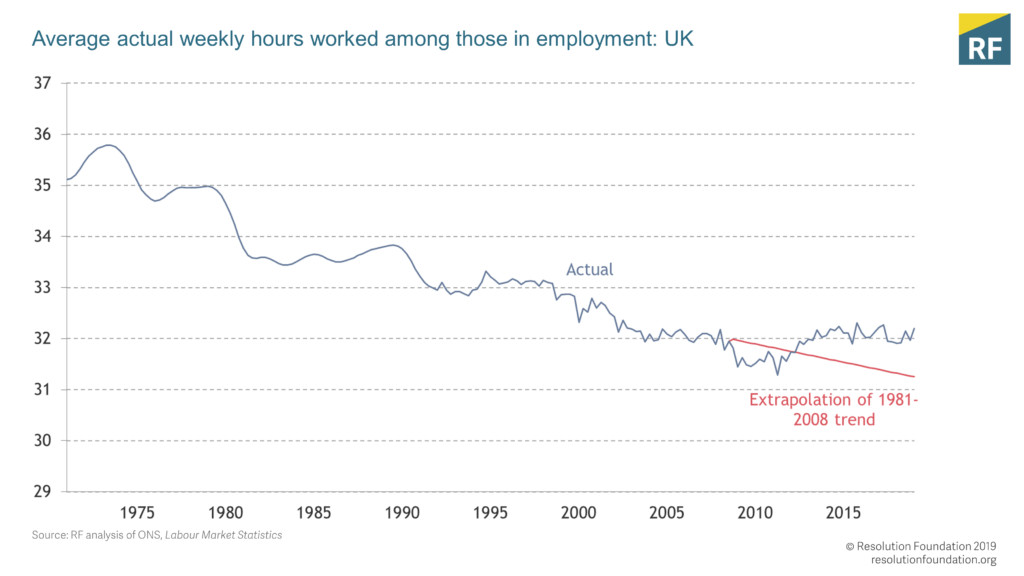 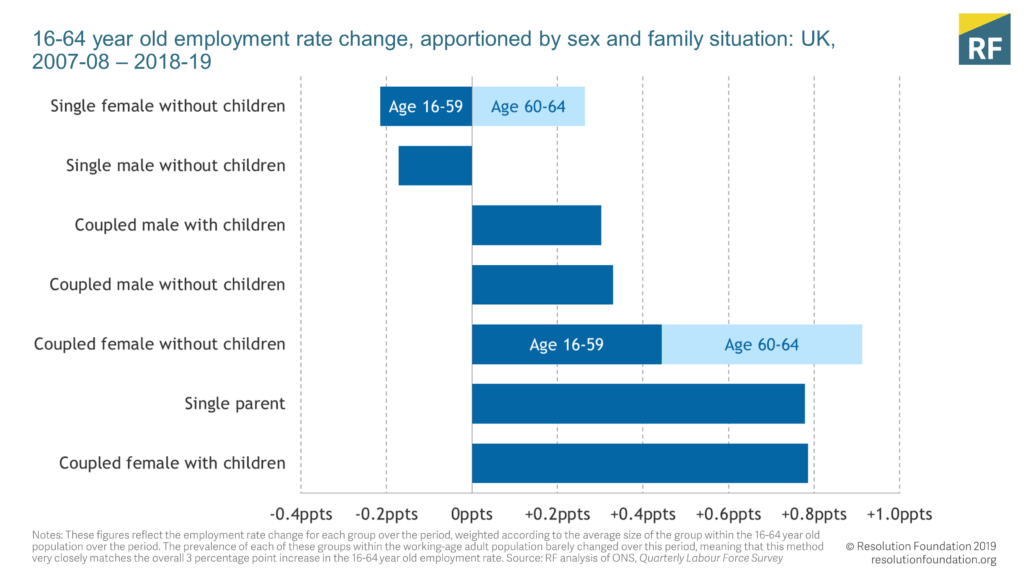 Third, rising employment has been a common feature across advanced economies in the aftermath of the financial crisis – reflecting the common income shock it led to.

Fourth, groups that have had particularly large income shocks have seen the biggest employment gains. Women in their early 60s have driven almost one-third of the overall employment rise, partly because of a rising State Pension age. Meanwhile welfare cuts focused on poorer households in part explain why employment growth has been focused amongst such families, especially single parents.

Crucially, this does not mean people working more is a bad thing. Higher employment has helped protect our living standards, and it has narrowed employment gaps between groups and places. Our flexible labour market has made that possible – but also left us with a legacy of too much insecure work. We should welcome the former, and address the latter. Restarting the long term decline in average hours worked would also be desirable, if accompanied by strong earnings growth.

This explanation for record employment also helps us to understand one of the central macroeconomic puzzles of our time: why wage growth in the UK and elsewhere took so long to pick up despite low unemployment rates. Increased labour supply helped protect individual household incomes, but collectively it meant much more slack in our labour market than we expected, delaying the point at which firms would be under pressure to start raising wages. Having at last got there whoever wins the election shouldn’t be taking any risks with the full employment we have waited a decade for.

The more general lesson here is that economies change. And maybe that should not be such a surprise. In many ways our economy is made up of the aggregation of human preferences, and the one thing we all know is that humans can change their mind.

Originally published in the New Statesman