The ONS published their annual release from the Annual Survey of Hours and Earnings (ASHE) on October 26th. It’s not the timeliest data – it was collected from a survey of employers all the way back in April, and we already know from other data sources how pay has evolved through to July and August. But it’s always a really useful release because of the amount of detail it gives on the earnings of different groups of workers. Today’s release is also the first set of ASHE data since 2019 that isn’t affected by the pandemic and the furlough scheme – many of the 9 million furloughed workers (at peak) were on reduced pay, which affected estimates of pay and pay growth. Among other things this made it harder for policy makers setting the minimum wage.

In this blog we highlight five things we learned from the data.

First of all, these new stats confirm that 2022 has been a terrible year for pay. In April, median hourly pay was up 4.0 per cent on the year in April, but down 3.5 per cent after adjusting for CPIH inflation. This puts 2022 behind only 2011 in terms of the steepest fall in pay in the ASHE data (though it’s worth noting that other data sources don’t point to such a steep fall in 2011). 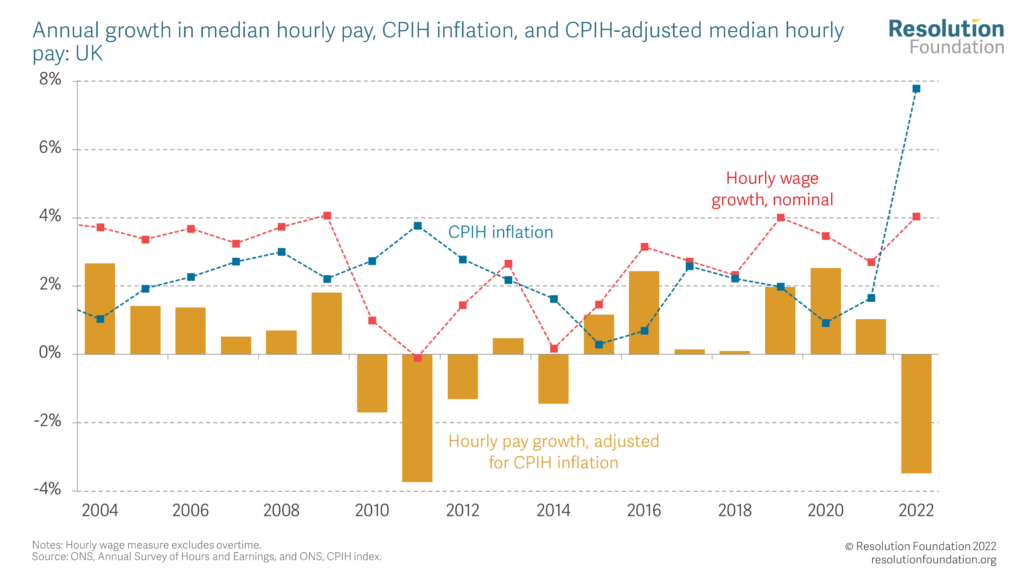 It’s definitely the case that real pay is falling, but we should be careful about drawing inferences from the annual growth data this year, because even though there weren’t any furloughed workers in April 2022, there were in April 2021, meaning the pay growth number is comparing a non-furlough year to a furlough year, which will be having a positive effect on measured pay growth. This, in turn, means the squeeze on real pay underway in April was worse than the above chart suggests, possibly by around half a percentage point.

In more timely data the furlough effect is now almost zero, and as the below chart shows the pay squeeze has deepened since April (here using weekly/monthly pay rather than hourly pay, for consistency with other data sources), reaching minus 2.8 per cent in the latest Average Weekly Earnings release. 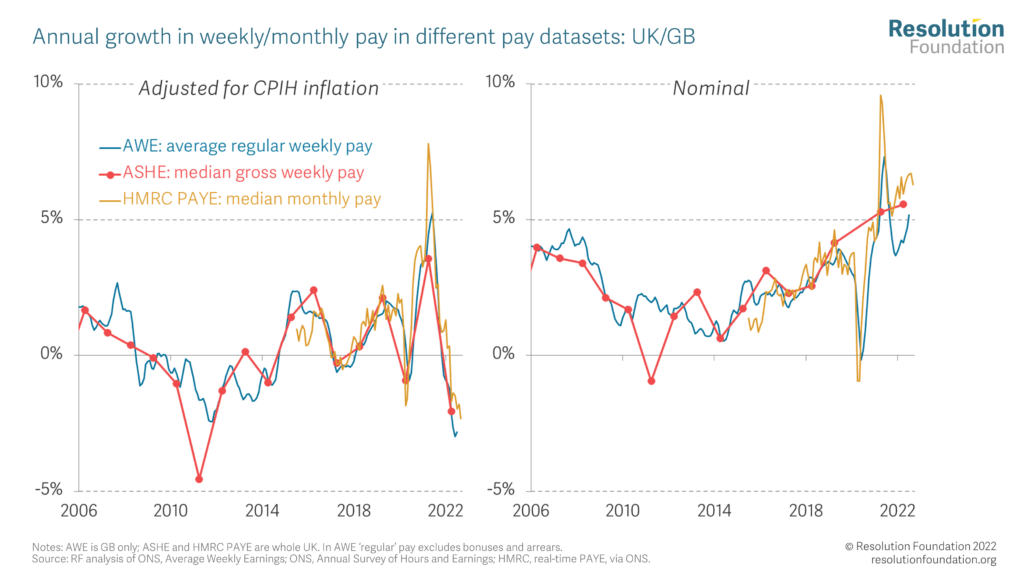 Is pay growth lower for the lower paid? It depends which dataset you use …

Second, ASHE is useful because it provides measures of pay across the distribution. The chart below compares annual growth in real pay at different points in the distribution.  Recently, in HMRC’s administrative data (shown in blue), pay growth has been stronger at the top (see the panel for ‘p90’, the 90th percentile) than the bottom (p10). Interestingly, we don’t see the same picture in ASHE, where growth at the 90th percentile in April was lower than at the 10th percentile. 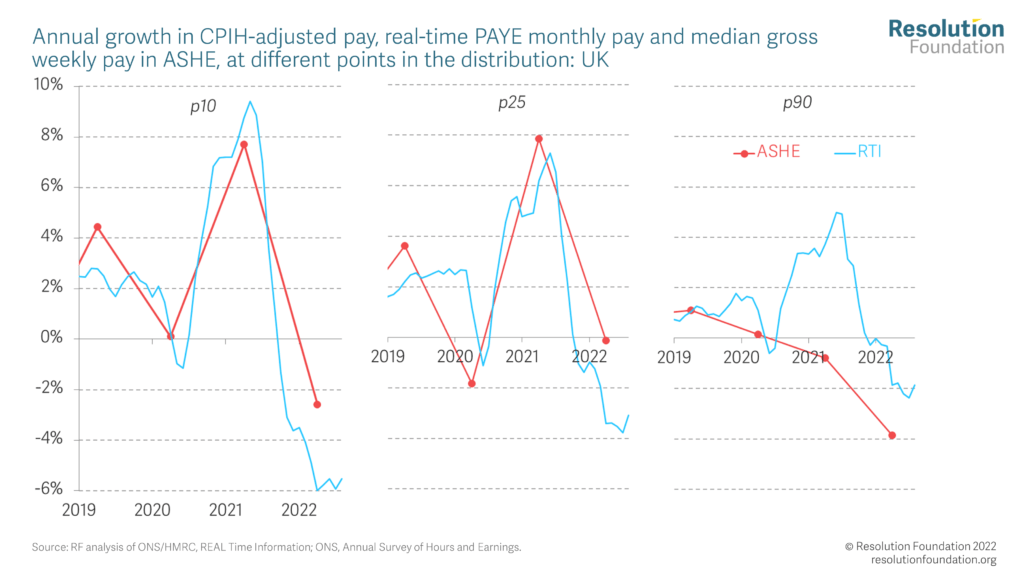 We know there have been a number of compositional changes which will be affecting both datasets – workers moving back into work as the labour market has recovered from the pandemic, and some self-employed workers reclassifying as employees following the application of IR35 rules to private sector companies. This may have affected better-paid self-employed workers more than lower paid, in turn boosting measures of employee pay at the top of the distribution. But it’s not clear why this would have affected the HMRC’s PAYE dataset more than the ASHE dataset. The other issue is both are affected by the differential take up of the furlough scheme among high versus low paid workers.

Given those question marks, it’s useful to zoom out of the most recent data. If we look through the pandemic period and compare 2022 with 2019, there’s a clearer picture of stronger pay growth at the bottom, driven by the fast-rising minimum wage (more on which below). However, strong pay growth at the bottom of the distribution has clearly been eroded by even faster rising prices (nominal hourly pay growth for the lowest earners was three times inflation-adjusted growth). 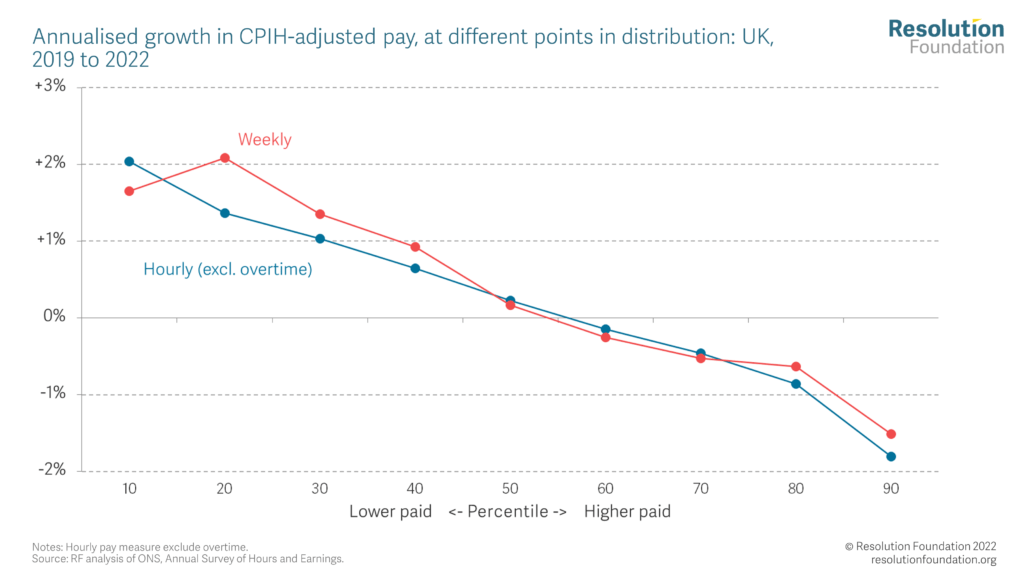 As mentioned above, ASHE is valuable for the detailed breakdowns it provides on the earnings of different groups of workers. In the chart below we present annualised pay growth from 2019 to 2022 (to skip the furlough measurement issues) for different groups. Across this period, pay growth has been stronger for women, the young, and those in part-time jobs. More worryingly, many groups had lower hourly pay (in real terms) than in 2019, including workers in the public sector, men, and some regions of England. 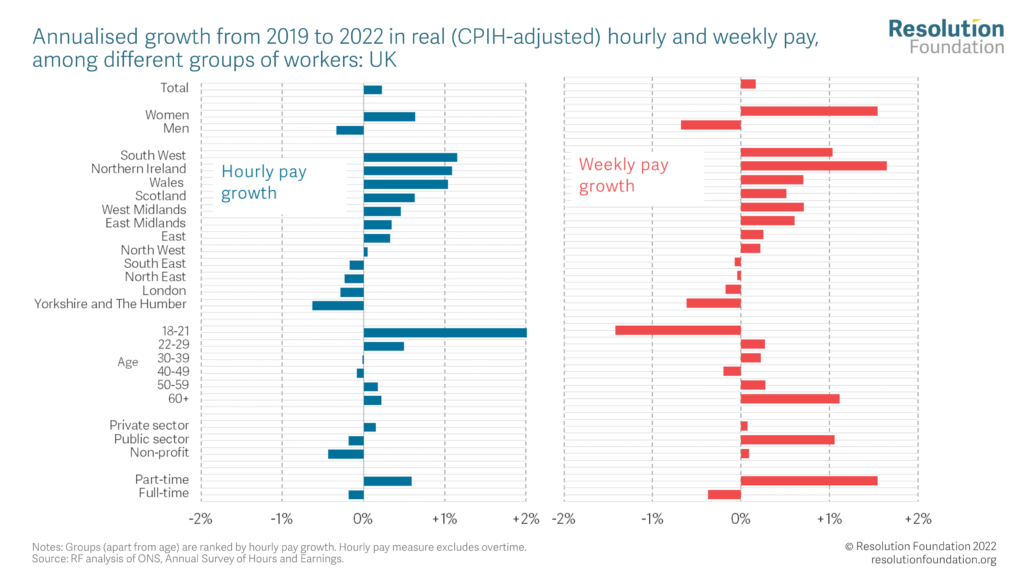 A dive into the figures at a local level shows substantial differences in 2022 typical pay. For example, average real weekly earnings in Wandsworth were twice that of Blackpool. Looking at what’s happened since the pandemic began, there is a real mix of local areas ‘catching up’ (Great Yarmouth), ‘falling behind’ (Fylde), and ‘zooming ahead’ (Rochford). 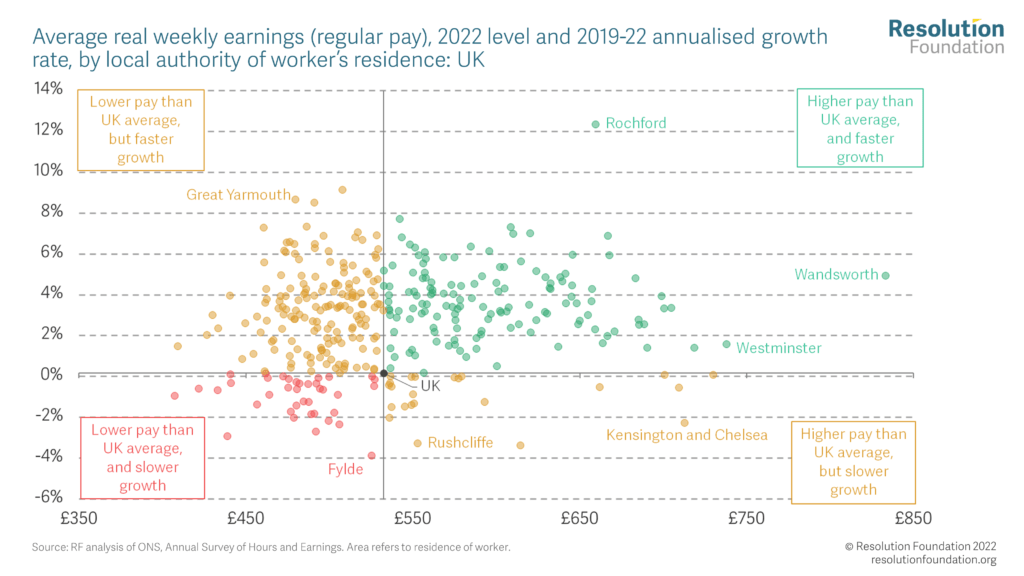 The new data allows us to explore the pay performance of some granular industrial groupings. Here, average hourly pay levels differ substantially: workers in manufacturing and oil refining earn three times workers in food and beverage services. Since 2019 annual pay growth has been particularly poor in the air transport sector, which likely reflects the impact and subsequent hangover from the pandemic. 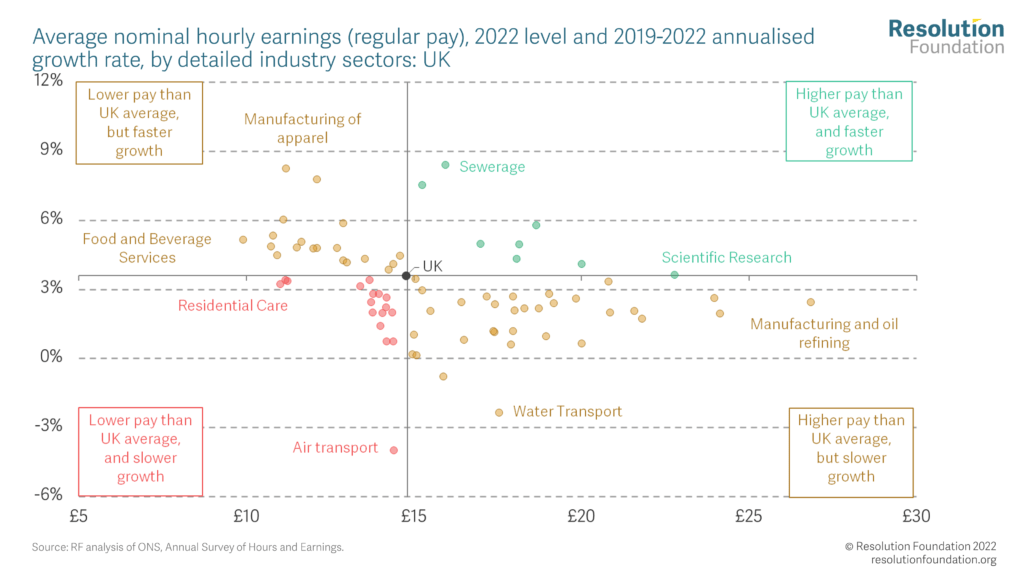 The minimum wage is set for a big uprating in 2023, perhaps even slightly higher based on today’s data

Another reason ASHE is important because it’s used to inform the setting of the minimum wage, which since 2016 has been linked to median hourly pay. Specifically, the Low Pay Commission have a target to raise the level of the National Living Wage to two thirds of median pay by October 2024. In April, the Low Pay Commission said that their best guess of the ‘on course’ rate of the NLW would be £10.32 in 2023 (assuming the age group covered remains at 23+). This was an estimate based on the data (and forecasts) available at the time. Since then, outturn wage growth has strengthened (in cash terms), and applying the LPC’s process for projecting next year’s rates suggests that, with today’s data, the Low Pay Commission’s ‘on course’ rate for 2023 might be slightly higher at £10.38. This would be a 9.3 per cent increase rather than a 8.6 per cent increase. 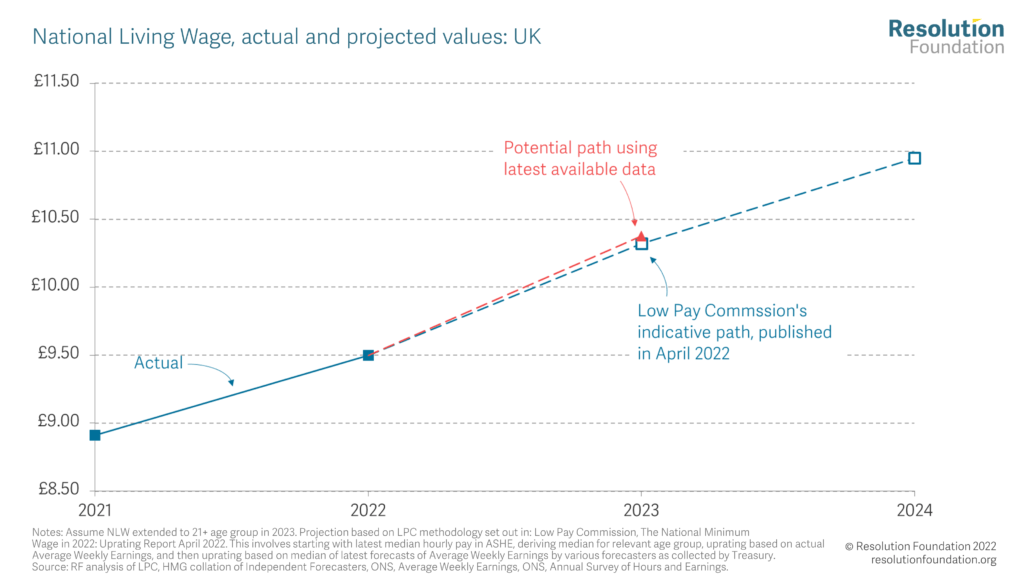 In practice, such figures are only indicative, and the LPC is not bound by these projections of the ‘on-course’ rate. They also take economic conditions into account. They will be making their recommendation to Government soon (if not already) and we expect the new rate will be announced at the Autumn budget, now scheduled for 17 November.

Whatever the precise size of the uprating, the minimum wage is almost certainly see a big rise in cash (if not in real) terms next year. This will continue the trend of a fall in the proportion of workers who are in low pay, which has fallen for nine consecutive years. The result: the proportion of low paid employees in 2022 is the lowest on record, which with the data below stretches back to the late 1960s. 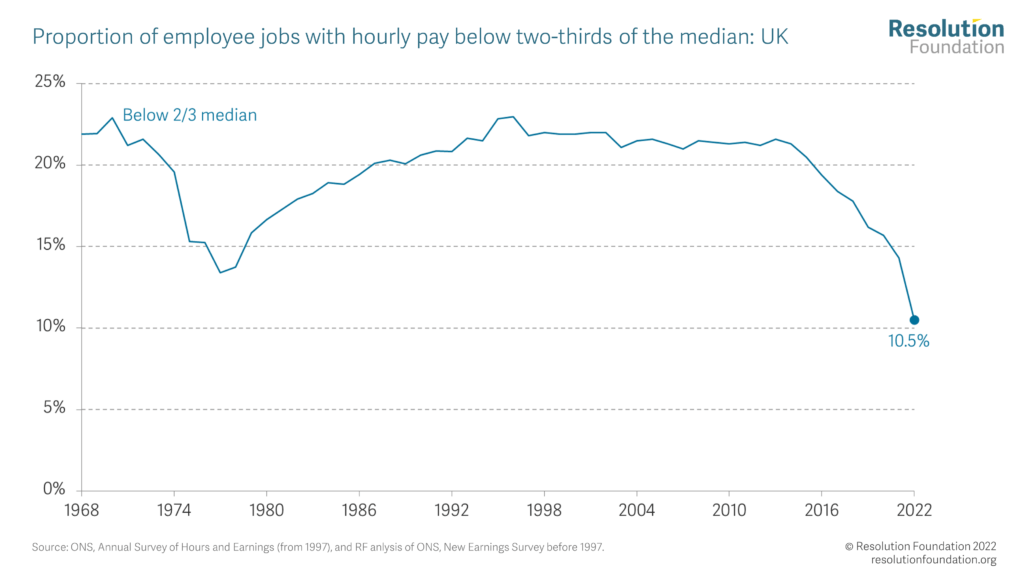 This shows what ambitious policy can do – we shouldn’t underplay how big a change this is. On the other hand, it’s also important to remember that hourly pay is not everything: weekly pay, and the number of hours worked also matter (if not more), as does the stability and predictability of those hours. On those areas there has been much less progress.

No progress on the gender pay gap this year

Finally, the ASHE data shows the gender pay gap is little changed on last year, and in fact rose among both part-time and full-time workers. It had been falling, and is low among the under 40s. But it is persistently high among the over 40s. This of course reflects the large and unequal impact of taking time out of work to care for children. 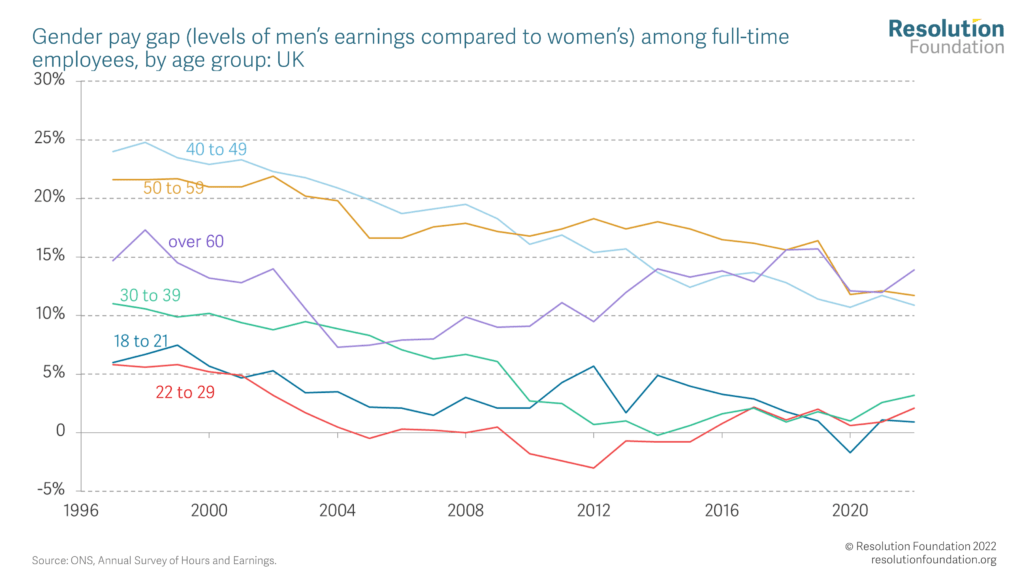 Those were our five key take-aways, but there is no doubt much more to learn from the many detailed tables published with today’s release, and ONS’s write-up is well worth reading, it contains lots of interesting charts and useful commentary.