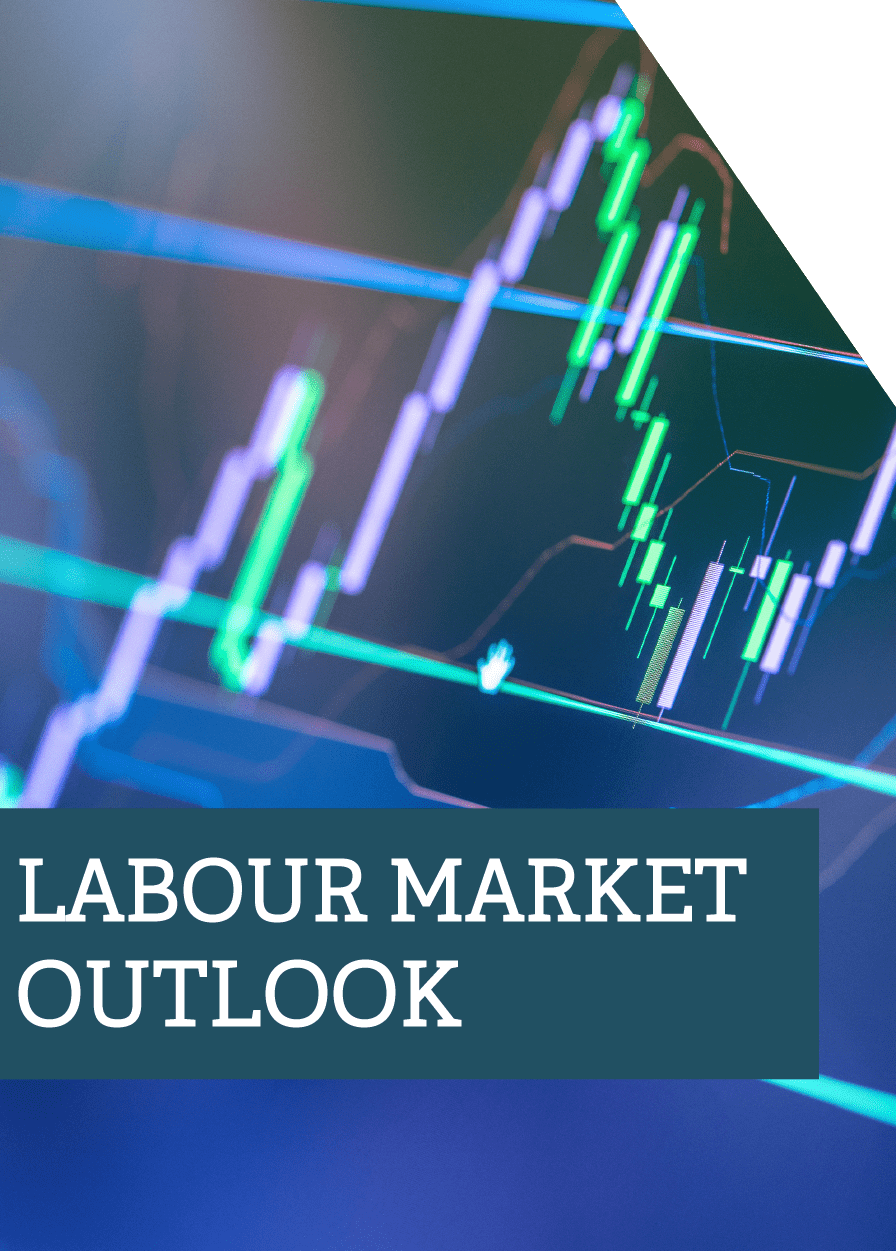 In the first months of 2022, the labour market continued to tighten, with no sign of weakening in the aftermath of the JRS. Unemployment has fallen further, and stood at an almost-record low of 3.9 per cent in the three months to January 2022 – and although the Bank of England is concerned about unemployment rising in the medium term as price rises dampen demand, the Office for Budget Responsibility expects unemployment to remain low through to the middle of the decade. And with ongoing high levels of vacancies, and strong job-to-job moves as workers gain confidence after the economic reopening, the labour market is tight on multiple measures.

That is not to say that the labour market is without its problems, however. Labour force participation, which fell during the pandemic, has not recovered, with recent rises in inactivity driven by people who are long-term sick. And rising inflation is already causing real wages to fall, with the squeeze set to last until the end of next year. Nominal wage growth is strong, however (albeit not strong enough to offset price rises). In this Outlook’s Spotlight, we explore this rise in nominal pay growth – a key driver of both living standards and future unemployment – and how much of it is driven by ongoing data complications from the recently-ended furlough scheme and compositional changes in the workforce. In Lifting the Lid, we look at local differences in the post-pandemic return to the workplace, the types of occupation that have grown and shrunk among employees compared to the self-employed, and how many workers are ineligible for statutory sick pay.

How should we interpret strong nominal earnings growth?

As the UK emerges from the remaining restrictions imposed by the Covid-19 pandemic, it is clear that the long-feared labour market impact coming out of the crisis – a rise in unemployment after the end of the Job Retention Scheme – has not materialised. Instead, attention has turned to wages. But while the main story for living standards has been falling real pay (driven by high inflation), pay is growing relatively quickly in cash terms: nominal earnings grew by 4.1 per cent in the year to January 2022, and the OBR expects year-on-year nominal pay growth to top 5 per cent throughout 2022 (see Figure 1), compared to an average growth rate of just 2 per cent in the decade prior to the pandemic.

Nominal wage growth is not just important for living standards, however: if earnings rise faster than productivity, there is a risk of further inflation down the line if businesses respond to rising wage costs by increasing their prices, and this in turn could lead to higher unemployment in the medium term. This Spotlight explores how we should interpret this strong nominal earnings growth, and the extent to which pay data is still being distorted by both the furlough scheme and the changing make-up of the workforce.

Figure 1: Nominal wage growth is set to be strong in the short term, though will be outpaced by inflation 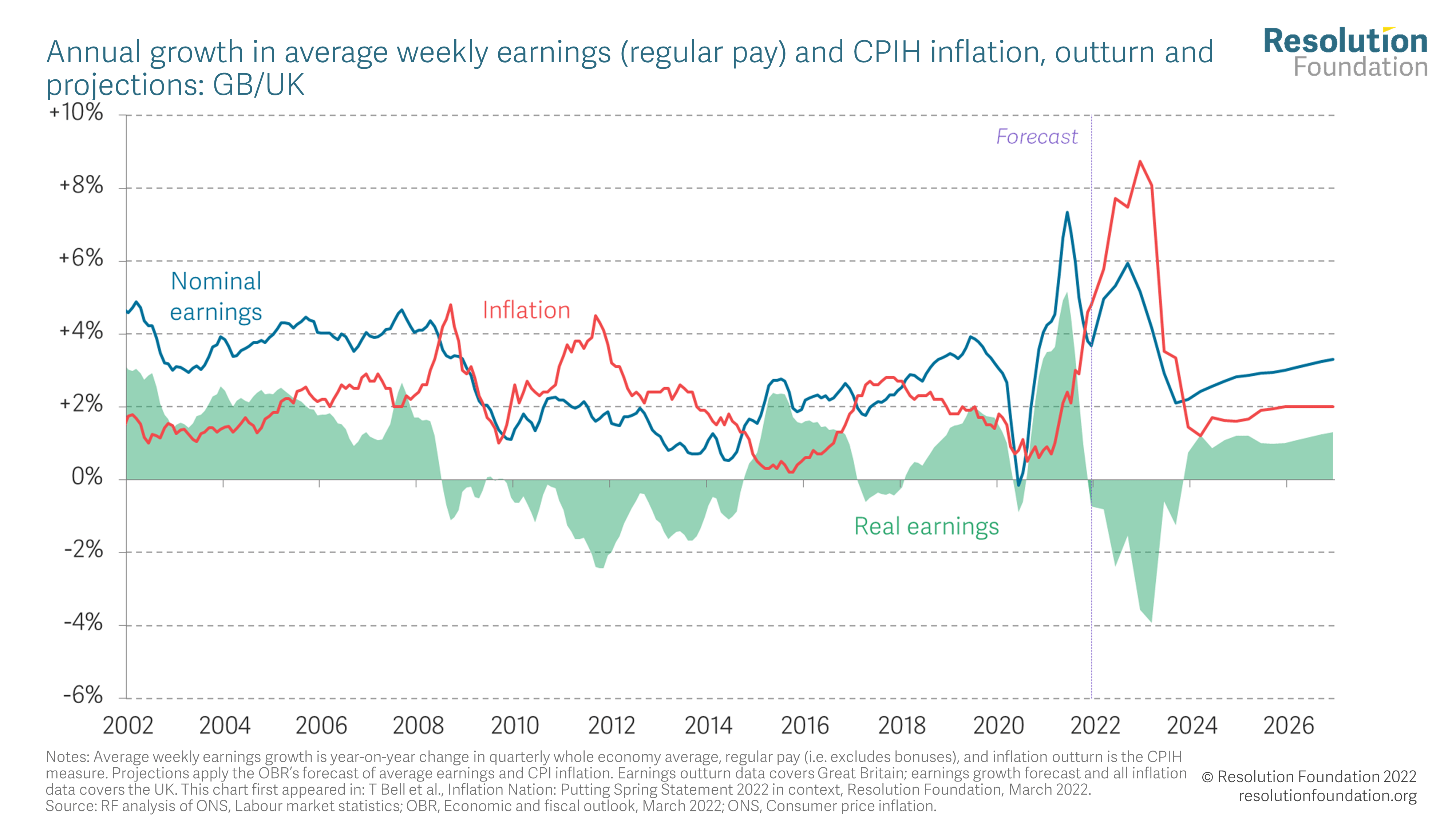 One key driver of nominal wage growth is a tight labour market. Since the summer, the labour market has tightened on all three of the headline measures shown in Figure 2. The unemployment rate is close to record lows, the unemployment-to-vacancies ratio is the lowest on record, and workers are moving jobs voluntarily at record-high rates. (Figure 2 shows the inverse of the trend in voluntary job moves, since a high rate of job moves is associated with a tighter labour market.)

Figure 2: The labour market is tight on a number of measures 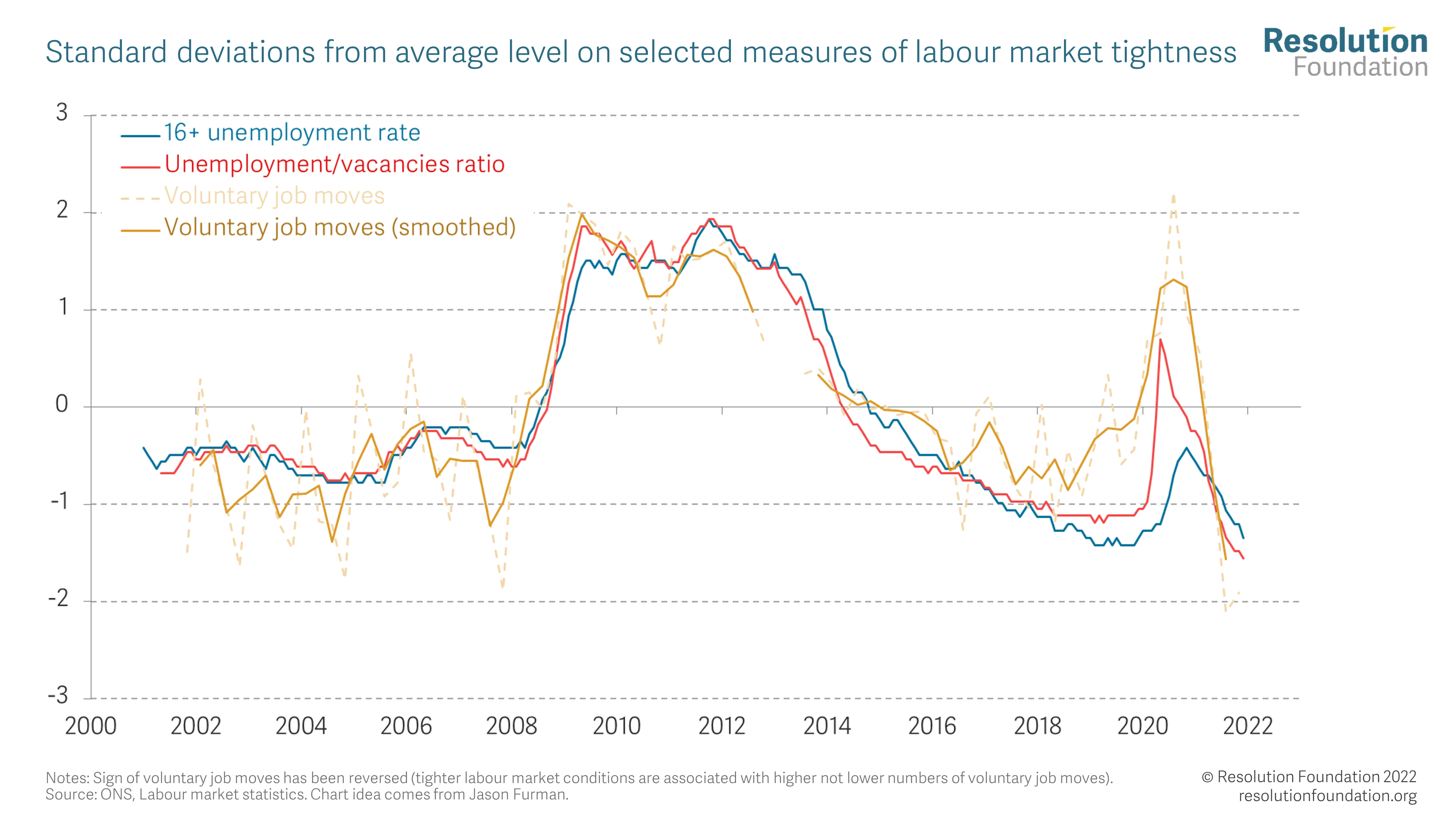 Both the Office for Budget Responsibility (OBR) and the Bank of England have pointed to this tight labour market as a driver of nominal pay growth, as employers raise wages to attract and retain workers. This is backed up by evidence from cross-country data: as Figure 3 shows, across OECD countries there is a clear negative relationship between pay growth and the unemployment gap (the difference between unemployment and its minimum in the past 10 years), after accounting for other characteristics of each economy. As the unemployment gap rises, pay growth tends to fall, all else equal. 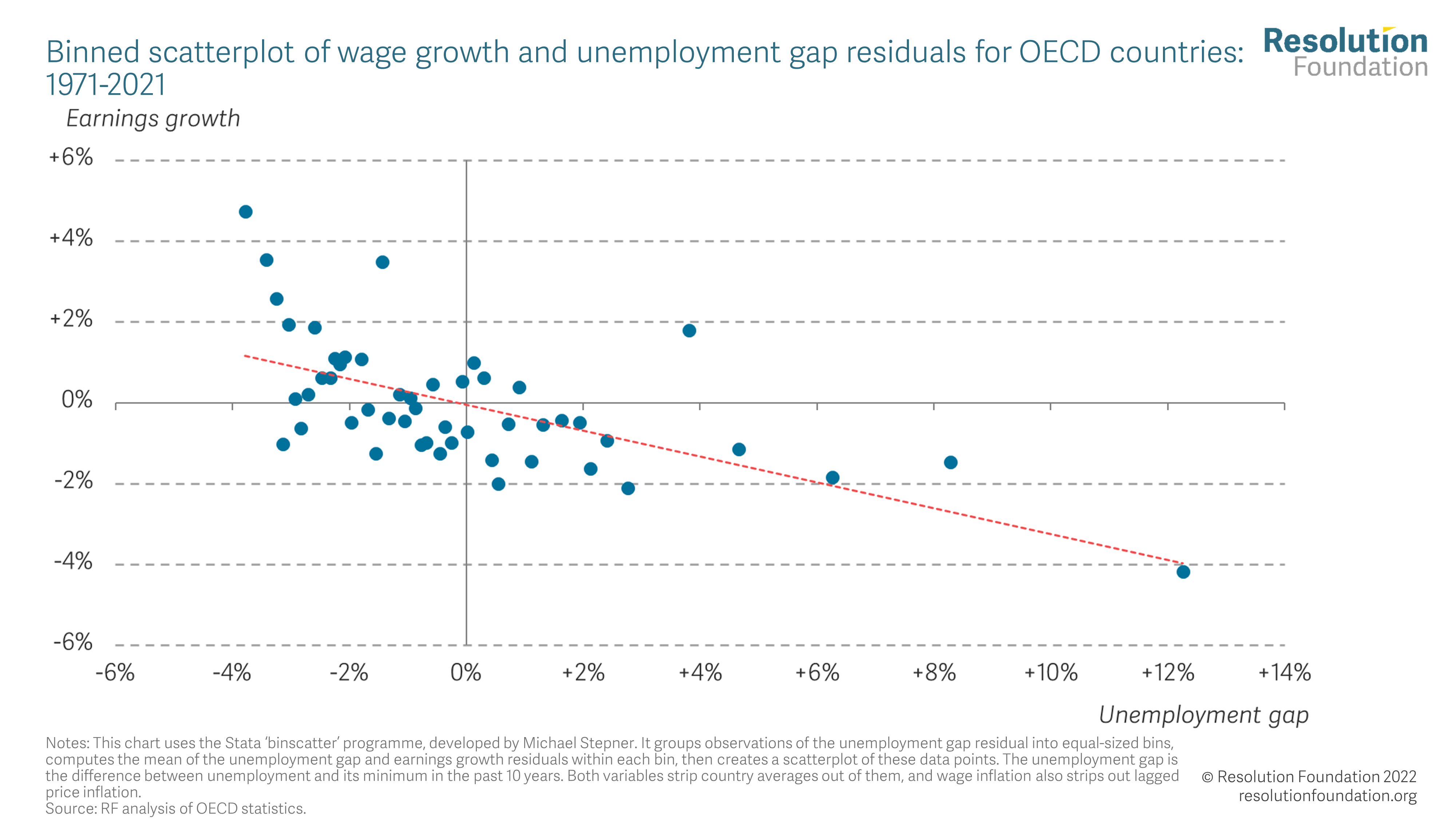 In addition, the OBR suggested that high inflation is itself driving some of the nominal wage growth in the short term, as price rises prompt workers to demand higher salaries. But this is set to be a short-term phenomenon – in the longer term, there is no sign in the OBR forecasts of the wage-price spiral feared by some policy makers in recent months.

Pay data during the pandemic has not always been straightforward to interpret, however. One reason is that many workers who were furloughed under the Job Retention Scheme (JRS) received only 80 per cent or less of their usual pay (the amount covered by the Government) unless their employer topped up their wages. As Figure 4 shows, this pushed down wage growth when furlough numbers were higher than the previous year – and the reverse happened as the JRS unwound. Average weekly earnings year-on-year growth was 3.9 per cent in Q4 2021 – but 0.9 percentage points of that was accounted for by furloughed workers moving back onto their full pay as they returned to work. The furlough effect will continue to push up pay growth until the autumn (at which point we will no longer be comparing pay to a point, a year ago, when the furlough scheme was in operation). It will contribute around a percentage point to pay growth in the first quarter of 2022.

Figure 4: In late 2021, earnings were still distorted because of furlough 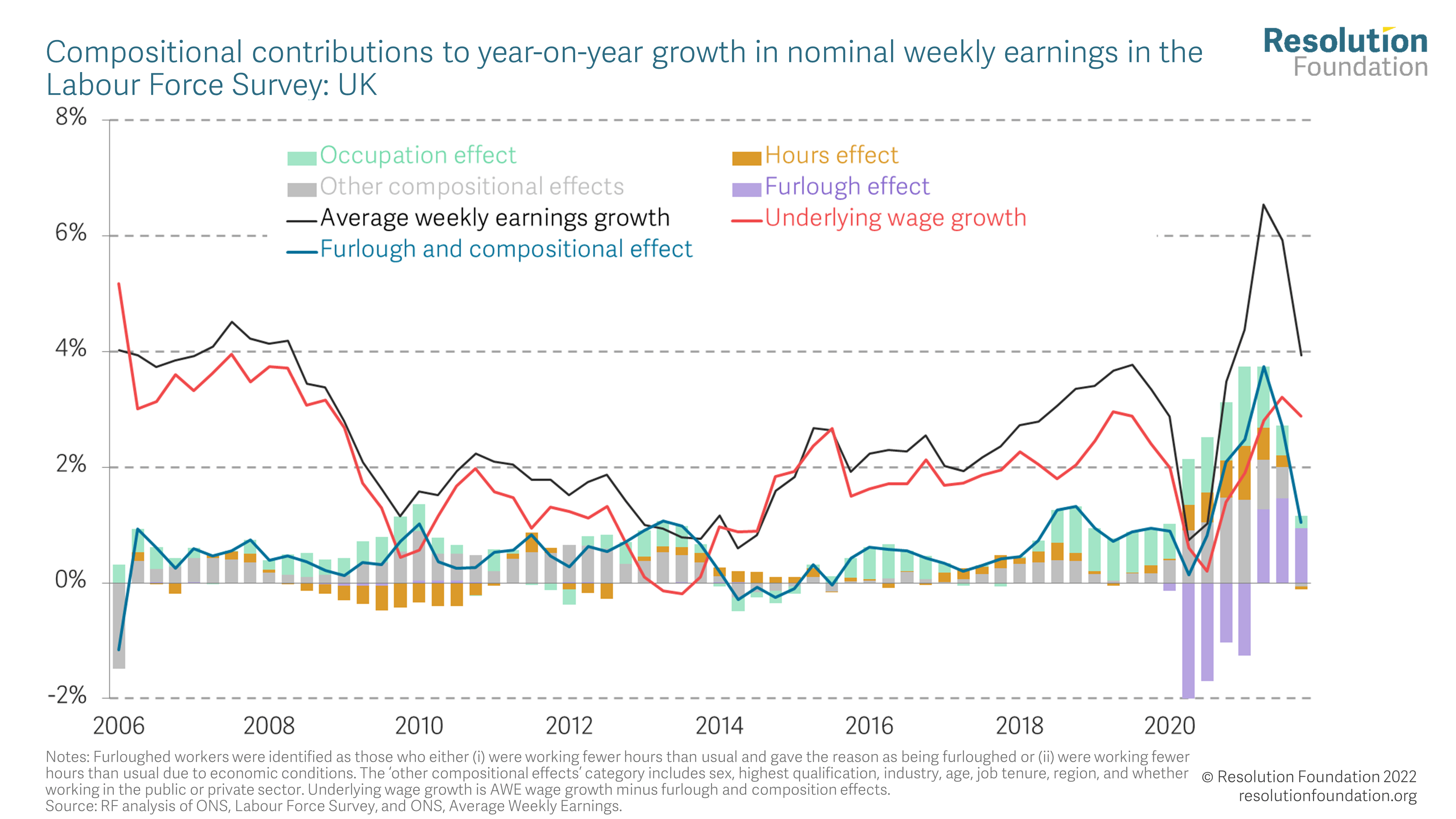 Figure 4 also shows the impact of changes in the composition of the workforce. As the pandemic struck, job losses were concentrated among lower-paid workers: this pushed up observed pay growth because the average person still in work was higher-paid than a year earlier. As the economy reopened in the middle of 2021, and lower-paying sectors such as hospitality experienced a hiring boom, we might expect this effect to have gone into reverse – that is, the average person in the workforce to become lower-paid than a year earlier, and for compositional effects to push down on year-on-year pay growth.[1]

We can compare these results to The Bank of England’s recent calculations. They estimated that underlying private sector pay growth is somewhat higher than pre-crisis levels, partly driven by higher inflation expectations. But the difference is not large. They estimate underlying private sector pay growth in the private sector was 4.0 per cent in November 2021, compared to an average of 3.6 per cent across 2019. Taking these results with ours, the shared message is that underlying pay growth, once furlough effects are removed, is likely to be similar to or at best only slightly stronger than pre-crisis pay growth. There is no evidence yet of accelerating pay growth to match fast-rising prices.

But the level of pay remains elevated compared to pre-pandemic

If pay growth in the early stages of the pandemic stemmed partly from changes in the composition of the workforce, and these effects have not gone into reverse, this suggests that the level of average earnings remains elevated compared to pre-pandemic. Figure 5 shows that four industries stand out as having above-average growth in the number of employees since the start of the pandemic, as well as above-average growth in average pay: IT and communications, admin and support, professional services, and health and social work.[2] Together, these four sectors have accounted for more than half (53 per cent) of the growth in aggregate pay since the start of the pandemic.

Figure 5: Office jobs and the healthcare sector have grown since the start of the pandemic 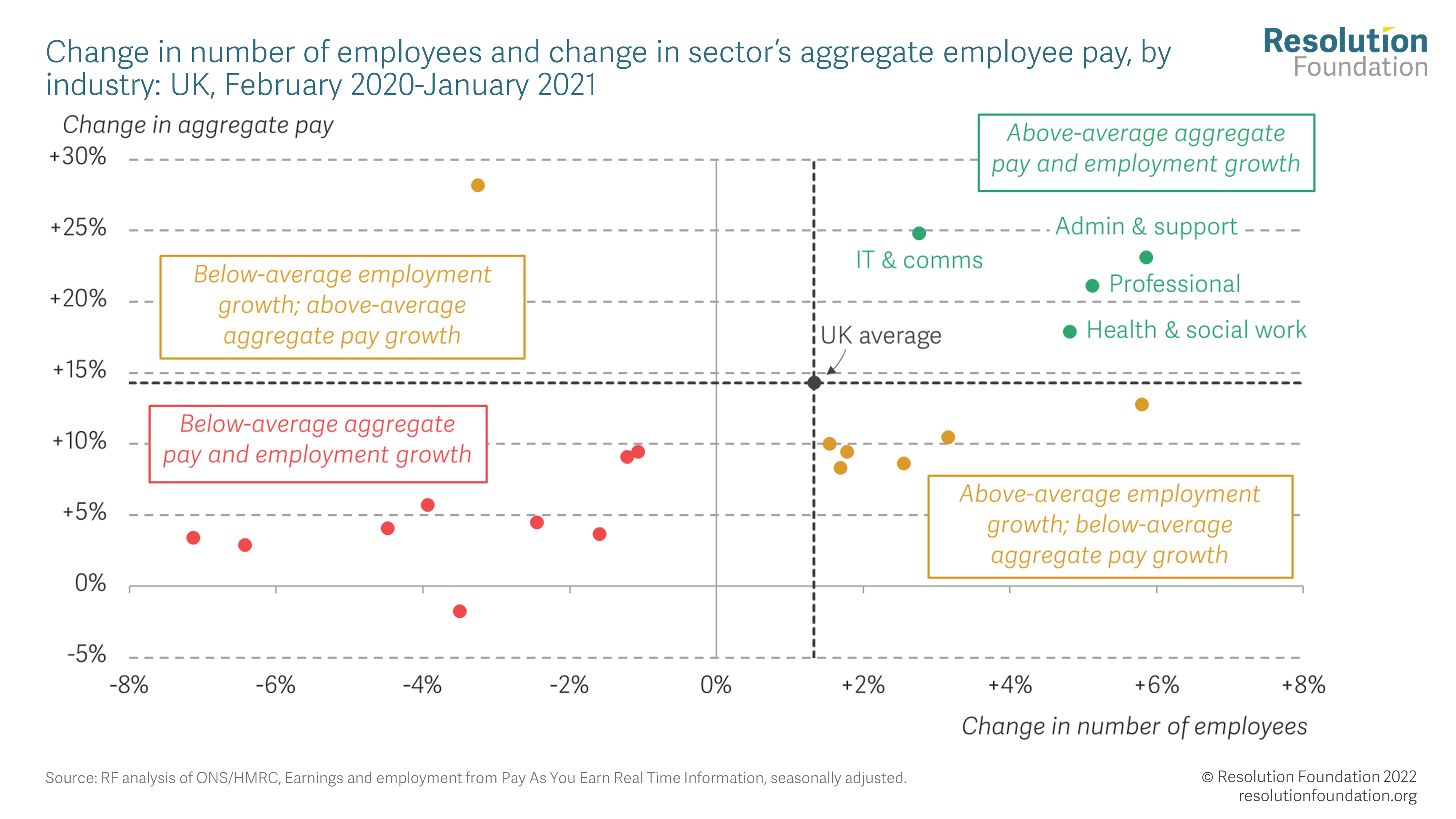 It is not surprising that the relative size of different sectors has changed in response to Covid-19: many employers in industries where people could work from home faced little impact from the pandemic. In addition, some of the growth in employee jobs has been driven not by growth in overall employment, but by self-employed workers becoming payrolled employees in response to the IR35 tax change – and as this Outlook’s ‘Lifting the Lid’ section shows, those who have moved out of self-employment and entered employee jobs are disproportionately in higher-paying occupations, pushing up average employee pay. (The growing sectors highlighted in Figure 5 also stand out if we use workforce jobs data that includes the self-employed, however.)

But the fact that these sectors remain bigger than before the pandemic could have implications for pay in the months ahead: while some of these sectoral changes may signal permanent shifts, some are likely to reflect temporary changes in economic activity that may unwind in the future. (Examples across the public and private sector include operating vaccination centres, meeting additional NHS demand, and providing PCR tests for international travel.) As pandemic demand continues to unwind, employment in these sectors may yet fall back closer to pre-crisis levels – and if workers move into lower-paying jobs elsewhere, this could exert downward pressure on average pay and so push down pay growth.[3]

It is difficult to know how much employment is being supported in different sectors by pandemic demand – and how much of this will reverse. But it is clear that these sectors’ disproportionate expansion has contributed to labour market growth. If the four sectors in the right-hand quadrant of Figure 5 had grown at the same rate as other sectors (in terms of both pay and employment), average pay would be 1.9 per cent lower than it is now and there would be 1.4 per cent fewer employee jobs.

Overall, then, nominal wage growth is healthy (although not quite as strong as headline figures suggest). But as well as possible headwinds over the next few months as the composition of the workforce continues to adjust in the aftermath of the pandemic, nominal wages are still not growing fast enough to keep pace with price rises. As Figure 1 showed, earnings are set to fall in real terms for the rest of this year and most of next – and wages will fall even for those who benefit from the 6.6 per cent rise in the NMW on 1 April, thanks to inflation which is set to top 8 per cent this spring. In the face of falling real wages, it is crucial not only to ensure that the labour market remains strong enough to deliver decent pay rises to workers, but also for the Government to provide targeted support to those at the sharp end of the cost of living crisis.

[2] One complication in using employee jobs data is that the IR35 tax change in April 2021 is likely to have shifted some private-sector workers from self-employment to employment, bringing them into scope of HMRC’s payrolled employee numbers but not representing growth in overall employment. However, we find very similar changes in employment levels by industry when we use data from the ONS Workforce Jobs series, which includes self-employed workers. We use HMRC RTI data in Figure 5 for consistency and because none of our main sources of earnings data include the self-employed.

[3] It is, of course, possible that any workers who do move out of these sectors maintain their current pay levels or get a pay rise. However, not only are two of the sectors that have grown during the pandemic (IT and professional services) substantially higher-paying than average, but workers who took on work as part of the crisis response may have been offered a pay premium to move jobs or to meet excess demand, which they may not be able to keep.