How do you get a pay rise? You could try to wrangle more out of your employer with canny negotiating tactics. That may help. But it’s not how the majority of us see our pay rise – and occasionally fall – over time.

In practice, other factors are likely to be more important. Some of these are relatively in our control, such as the job moves we make. But more often they come down to luck, and relate to everything from when we were born to the state of the economy.

Be young (and born at the right time)

Pay tends to rise the fastest during your 20s, when you are at the start of your career. That’s because you are likely to start on a low salary and quickly gain skills and experience.

This rapid pace then slows during your 30s and 40s, with pay rising by 2 per cent and 1 per cent a year respectively during these life stages. It then generally starts to fall as people move towards retirement.

There are ways to boost this pay trajectory. While going to university in your 20s means delaying the start of your career, graduates can expect to see faster pay growth for the rest of the decade. Graduates born in 1980 saw their average annual pay rise by 8 per cent in real terms between the age of 22 and 30. That’s compared to 6 per cent a year for those with A-Level qualifications, and 3% for those with an equivalent vocational qualification.

Every generation tends to earn considerably more than the one before it. For example, those born in the early 1970s earned about 16 per cent more at the age of 28 than those in the late 1950s. But for millennials, it’s a different story.

While those born in the late 1980s still saw their pay rise fastest in their 20s, they earned about the same by the age of 28 than those born 15 years earlier. That’s because they started their careers in the middle of an unprecedented pay slump, following the 2008 recession. 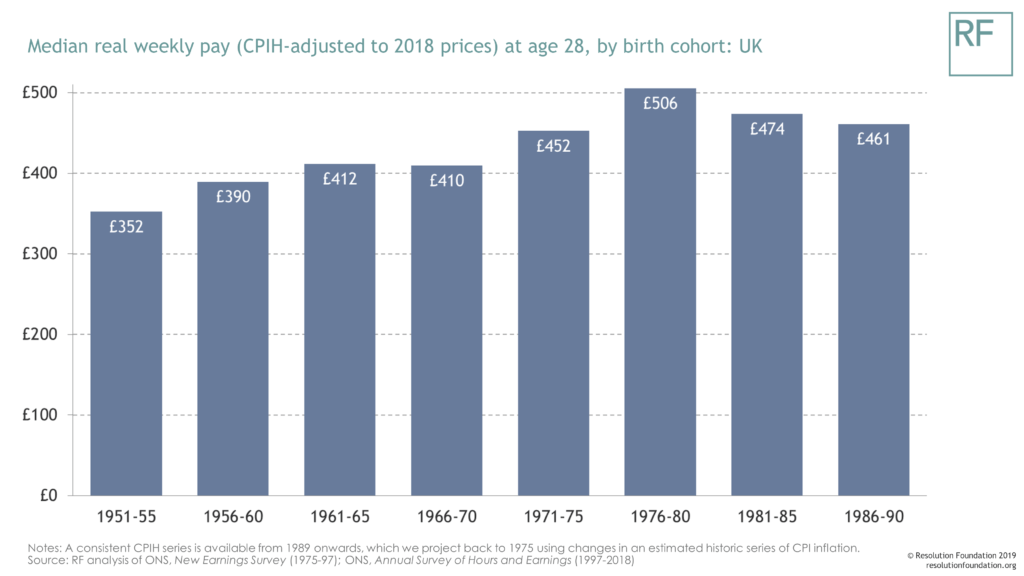 Change jobs…or even better, change jobs and move to the city

Rather than negotiate a raise with your boss, you could ditch your employer altogether for a bigger pay rise.

In 2018, workers who stuck in the same employer could expect to see their pay rise by 0.6 per cent a year, after inflation.

But the typical pay rise in the year after changing employer was over seven times higher, at 4.5 per cent. A new job may better reflect an employee’s skills and experience, while most people are unlikely to switch jobs unless they are being offered a pay rise. 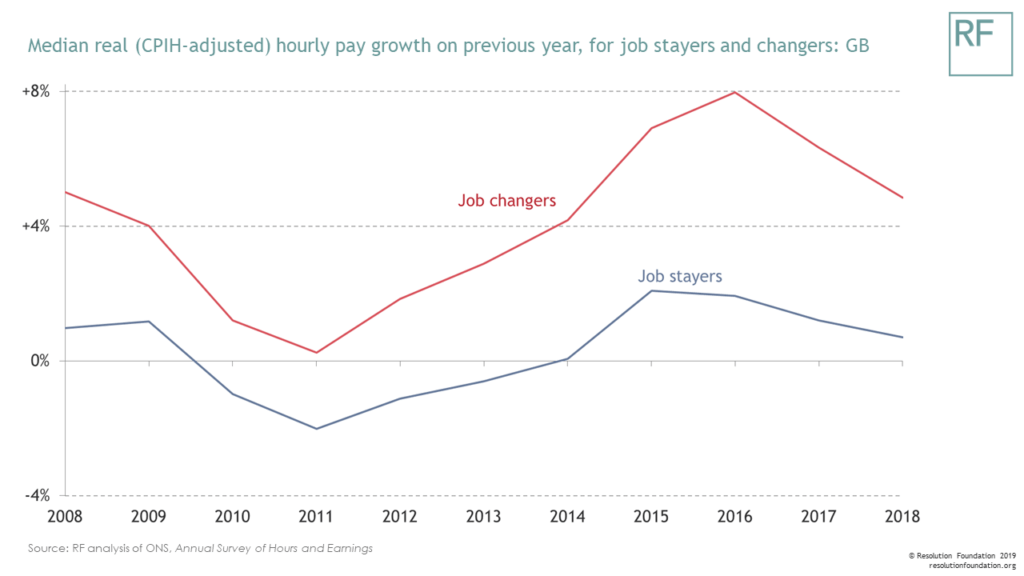 But if you want a really big pay rise, you need to move house too.

In 2016, the typical pay rise associated with changing both jobs and region was 9 per cent. That’s likely because there is a wider pool of jobs to choose from, and because pay in the same industry can vary dramatically across regions. For example, average weekly pay for skilled construction work in 2018 was £508 in the North East but £570 in London – a third higher.

Given these financial incentives, it’s perhaps surprising that young people in particular are moving jobs less frequently than they used to. There are good and bad reason for this.

Most positively, there are now fewer employment black spots across the UK, meaning there is less of a need to ‘get on your bike’ to find work.

Less positively, it’s also because those bigger pay rises are often swallowed up by increased housing costs in higher-paying areas. Compared to the North East, average pay in London is 1.5 times higher, but house prices and rents are about 3 times higher.

On top of this, it may be that following the biggest recession in almost a century, the British are simply less willing to take financial risks, as the Bank of England’s chief economist recently suggested. 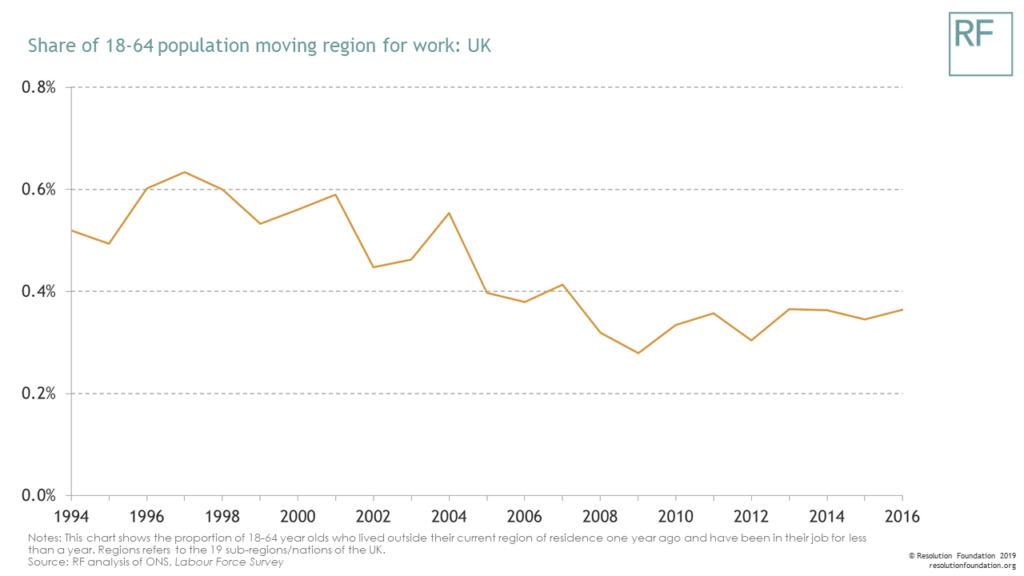 Almost 50 years on from the Equal Pay Act, significant progress has been made on closing the gender pay gap.

Men are still paid 18 per cent more on average per hour than women, but no such gap exists among younger workers. Men and women in their 20s today earn roughly the same amount per hour, and among full-time workers, women earn slightly more.

But women’s pay trajectory tends to tail off if they have children, particularly if they switch to part-time work.

The gender pay gap emerges significantly when people hit their 30s and continues to grow with age. This is partly the effect of the ‘motherhood penalty’, which drags down women’s average pay. For women born between 1977 and 1980, those that had children at age 28-30 were earning 10 per cent less per hour (and 35 per cent less per week) by age 35 than those that did not have children.

Another reason is that there is still a dearth of flexible jobs at a senior level, and take up of shared parental leave is thought to be less than 2 per cent.

Of course, working part-time isn’t just about looking after children. A quarter of older female workers provide unpaid care – for example, to their parents or grandchildren – compared with an eighth of male workers. 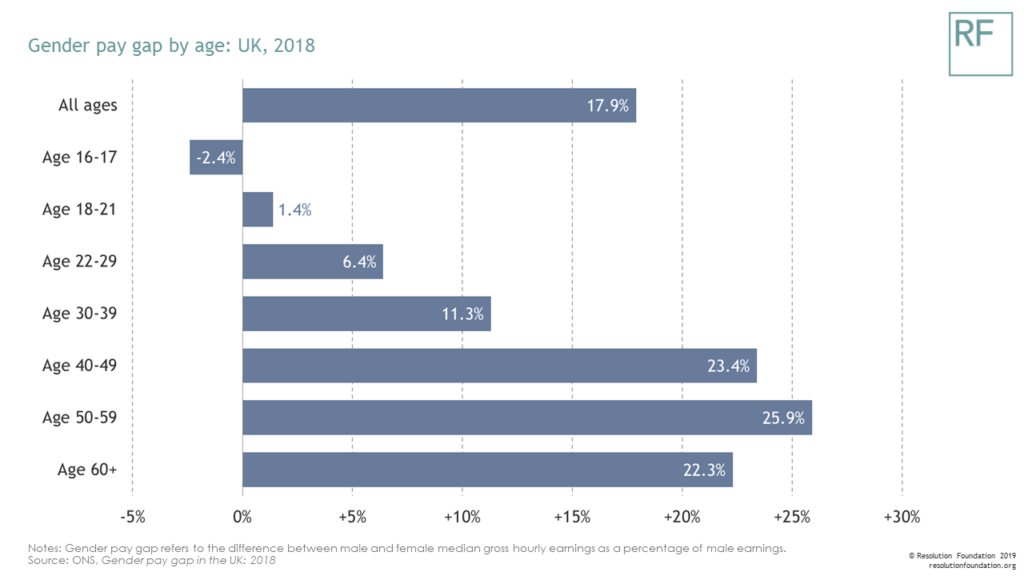 Being at the bottom – or at the top

How fast your pay increases also depends on where you sit on Britain’s pay scale – and those at the bottom have seen their pay rise by the most in recent years.

Over the past two decades, the bottom fifth of workers have experienced real pay growth of 40 per cent in real terms – twice as fast as middle earners.

That’s largely due to the introduction of the National Minimum Wage in 1999, which has steadily risen over time. It now stands at £8.21 for over 25s, making it one of the highest minimum wages in the world.

But pay growth hasn’t just been strong at the bottom: those at the top have done well too. Average pay for the top 5 per cent of earners grew about 50 per cent faster than pay for middle earners over the last 20 years. 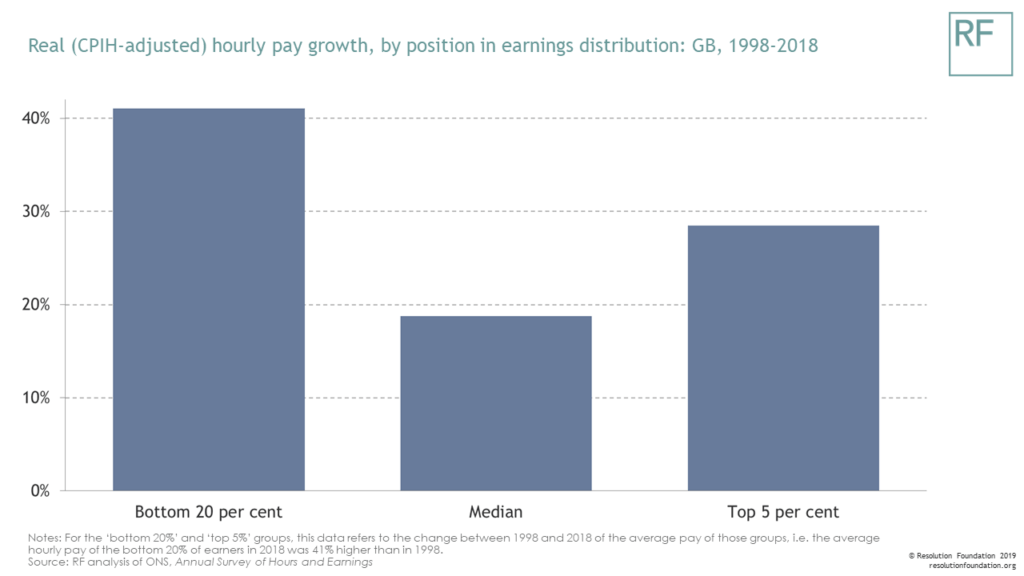 Be more productive – and hope that everyone else is too

There are lots of reasons why our pay packets may grow or shrink from year to year – from the decisions we take, to changes in government policy and how society values the work that we do.

But the long-term driver of what happens to our collective pay is how productive we are. The more we produce per hour, the more our employer can afford to pay us.

This means when productivity falls, our earnings are squeezed.

Over the past decade, Britain has experienced a complete fall-off in productivity growth, not unrelated to the great financial crisis in 2008. This largely explains why the past 10 years have been the worst for pay growth since the Napoleonic Wars at the beginning of the 19th century. 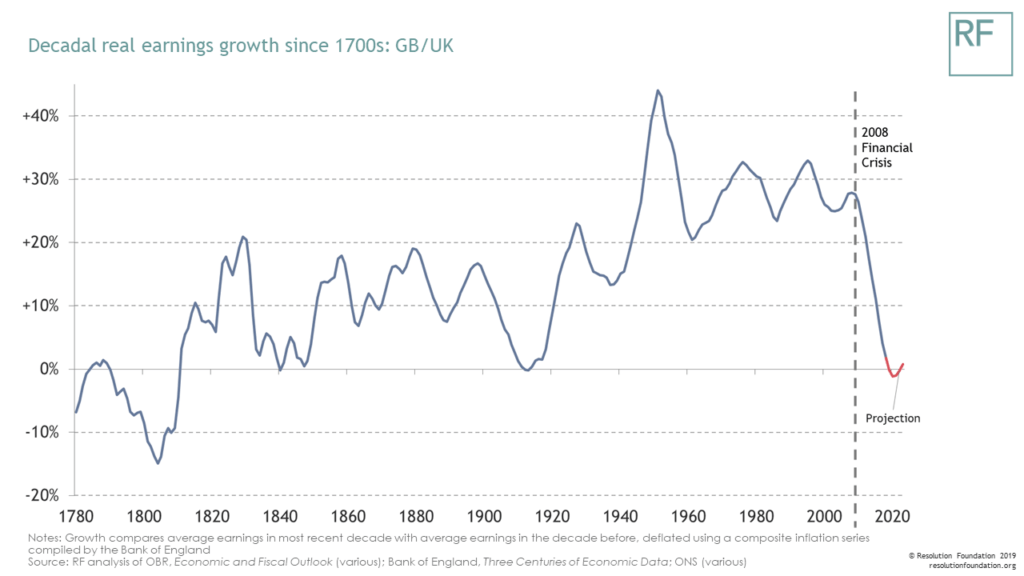 Boosting productivity, and consequently wages, is mainly in the hands of employers and the government, who can invest more in things like equipment, technology and training.

This is the key to making sure the next generation isn’t worse off than the current one.