Two big changes in the labour market over the past two decades have been the rise in self-employment and the introduction and uprating of the minimum wage. Is there a connection between these trends?

Legally, of course, there is no connection – the minimum wage applies to employees only. But economically, we would expect one. A higher wage floor increases the cost of hiring employees, and makes self-employed workers relatively more attractive as a source of labour. All else equal, we would expect employers to respond by substituting employees for self-employed workers. Some have speculated that the minimum wage has contributed to the growth of self-employment. If this is true, it might be an argument against lifting the wage floor to ‘ending low pay’ levels, an ambition targeted by ex-Chancellor Philip Hammond.

The theory makes sense, but in practice it is hard to find much evidence of this happening (although as-yet unpublished research conducted by the Low Pay Commission indicates that there may be something going on in some areas[1] ). If the minimum wage was pushing up self-employment, we would expect the increase in self-employment to be greatest in the areas, occupations and industrial sectors where the minimum wage ‘bites’ the most (i.e. where the minimum wage is highest relative to average pay). But that doesn’t seem to be the case. 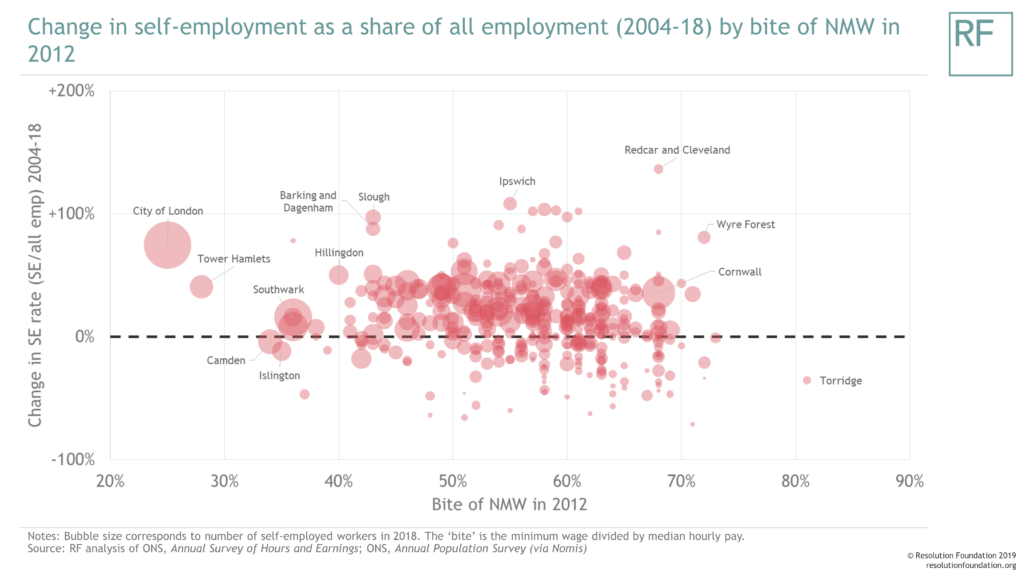 This is a surprising result. What explains it? One problem with the chart is that it looks at overall self-employment growth, whereas we would not expect the minimum wage to have any effect on higher-paid self-employment (which accounts for more than half of the growth of self-employment over the last decade[2] ). However, repeating Figure 4 with only lower-paid occupations (caring, sales, and elementary occupations) still shows no relationship. Another explanation might be that the theory is correct but hard to observe in the presence of other, more important, factors. We have argued in the past, for example, that the most important driver of the growth of self-employment is its favourable treatment in the tax system.[3] 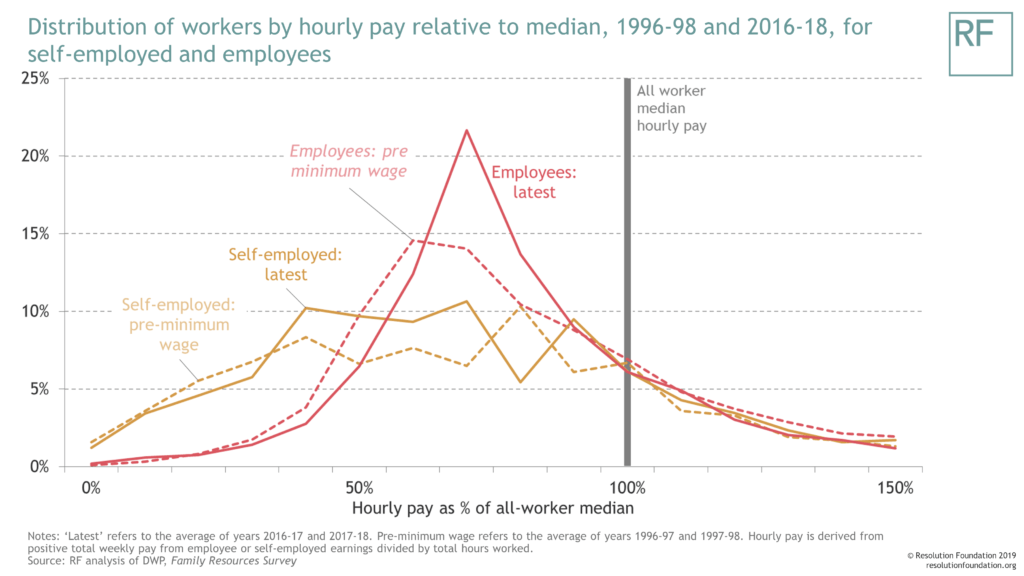 Much like employee pay growth, the result of these shifts is that earnings growth for the self-employed has been strongest for the lowest earners since the introduction of the minimum wage. Hourly real earnings have increased by 51 per cent for the bottom fifth of self-employed workers since 1998-99, compared to growth of around 15 per cent in the top half of the self-employed hourly pay distribution.

To return to the question raised at the outset, the evidence here suggests that if there is a connection between the minimum wage and self-employment, the balance of evidence points to a positive one (improving self-employed wages) rather than a negative one (driving people into low-paid self-employment).
But despite recent improvement, the problem of low pay among the self-employed is significant. Other policies are needed to help this group.

[3]    C D’Arcy & L Gardiner, Just the job or a working compromise? The changing nature of self-employment, Resolution Foundation, May 2014