Politics is about answering the question the country is asking at that time, and in that place. Context matters. This fact seems to have escaped the notice of a number of candidates in the rather crowded field to be the next Conservative leader, judging by the single focus of many of their big ideas: massive tax cuts. In doing so, they misread the state of the nation’s finances, the state of our public services and the desirability of closing, rather than increasing, the divides in our country.

Here are the highlights so far. Dominic Raab wants to cut the basic rate of income tax by 5p, while raising the point at which you start paying national insurance to £12,500. Jeremy Hunt wants another massive cut to corporation tax to 12.5 per cent – far lower than any other big developed country. And today Boris Johnson has set out plans to raise the point at which you start paying the higher rate of income tax from £50,000 to £80,000. 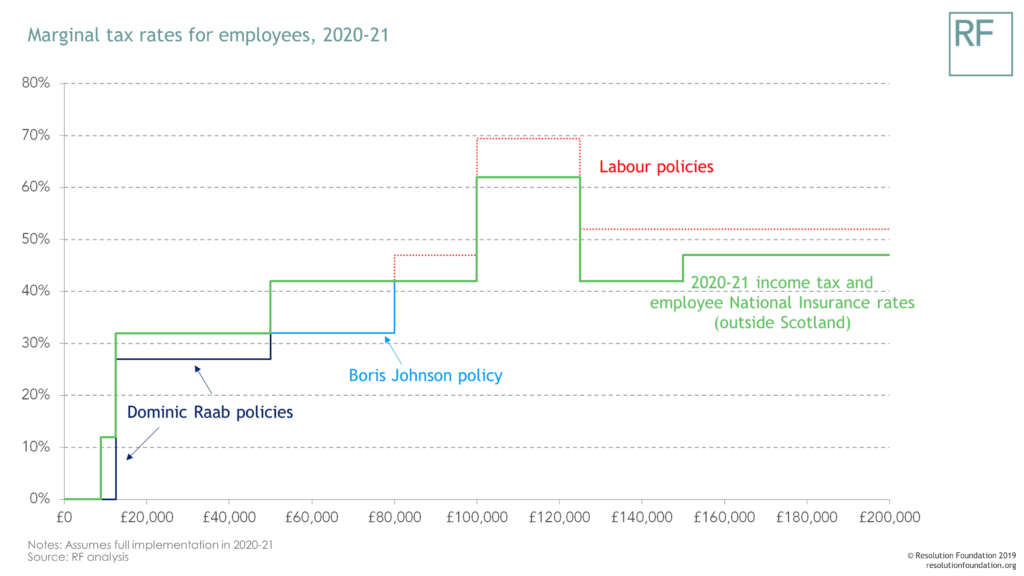 These are very expensive tax cuts. The Raab plan comes in at £32bn, while Hunt’s 12.5 per cent corporation tax rate would cost the exchequer something in the region of £13bn. Boris Johnson’s big tax cut is less expensive, but still very costly at around £10bn. The bill is half what you might expect because, while those earning between £50,000 and £80,000 are seeing their marginal income tax rate cut from 40p to 20p, the less-mentioned part of the package is seeing those same people paying a 12 per cent marginal rate of national insurance, rather than the current 2 per cent. So around £20bn goes on the income tax cut, with roughly £10bn clawed back through national insurance.

The Johnson plan is a huge tax cut for those who benefit. Someone earning £80,000 would see their tax bill fall by £3,000 a year. That might not be £350m a week, but it’s not bad going at £57 a week – exactly what a young unemployed person is expected to live on via Jobseeker’s Allowance at present. But obviously only a very specific group would benefit at all. The typical income in this country is £26,400. Only one in seven people will earn enough to get any benefit from this policy – and the biggest winners are those on the very highest incomes. In fact, 83 per cent of the gains go to the top 10 per cent of households. Someone on say an MPs salary of £79,468 gains £2,946. One Nation it is not. 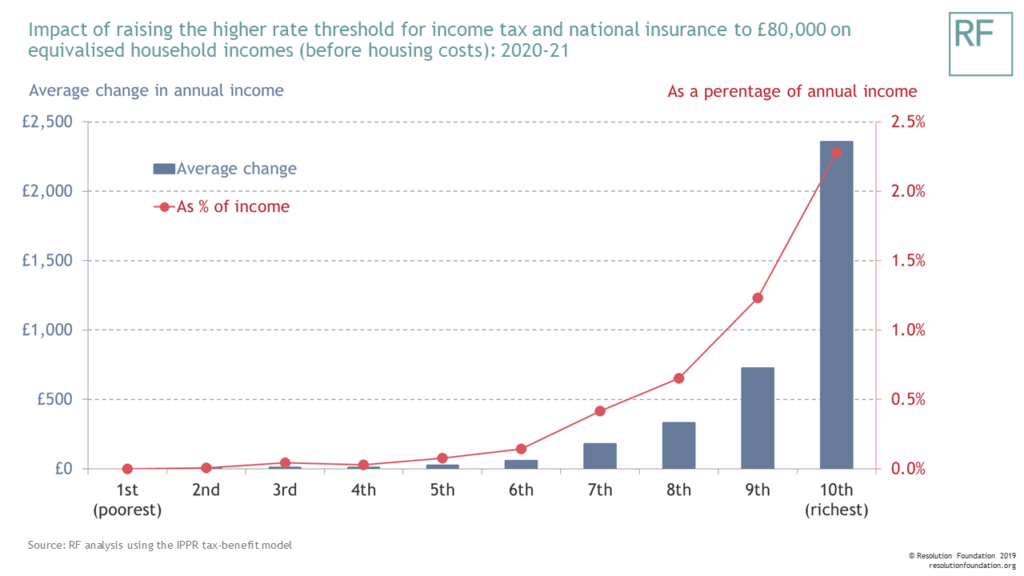 Mr Johnson’s policy is not the most expensive of tax cuts being proposed by contenders to be our next Prime Minister. But it is the most regressive. Further widening the gap between the rich and poor is an odd lesson to draw from the UK’s experience of financial crisis and Brexit. The policy detail also risks running up against Britain’s generational divides and devolution – because people aged over the state pension age do not pay national insurance, while Scots do. The (relatively few) over 65 year olds with incomes over £80,000 would therefore get a huge £6,000 tax cut, while rich Scots could in theory see their tax bills rise by £2,950 (because income tax is devolved but national insurance is not). Ruth Davidson is unlikely to be cheering.

Now none of this is to say that it’s not legitimate to debate how many people should be paying the higher 40p rate. After all, the number of higher-rate taxpayers has increased from 2.5 million to 4.3 million this century. But this increase is in part down to trying to claw back some of the gains to higher earners from the already hugely expensive increases in the income personal tax allowance since 2010.

Crucially, debating the right levels of tax is not some kind of eternal question with the same answer in all times and all places. Just because you admire Ronald Reagan and his tax cuts, doesn’t mean today is the 1980s and time for a repeat. Instead, two 21st century challenges stand out.

First, there’s the public finances. Yes, there is some scope for fiscal loosening with the deficit now at historically low levels. But we should remember that the nation’s balance sheet is less encouraging of a let-rip strategy. Our national debt is more than twice the level it was before the financial crisis, and with our public sector net worth having turned negative since the financial crisis, we do not have the assets – be they council homes or nationalised utilities – to sell off to bankroll lower taxes. Nor do we have the demographic headwind of the 1980s – the 2020s is when the costs of an ageing population come home to roost.

Second, there’s our public services. These are not tax cuts being promised after years of plenty for our welfare state. Indeed that is why all Conservative leadership candidates want to echo Theresa May’s promise to end austerity. Tax cuts on this scale will run directly up against the wish to fund politically-popular spending for our schools and hospitals, not to mention Tory party priorities like defence. And that’s before we get to the ignored but creaking parts of our public realm like local government and prisons, where violence is at record highs. Thanks to social security cuts the next Prime Minister looks set to see child poverty rise on their watch, possibly to a record high. As yet, no candidate has set out a plan to address this. 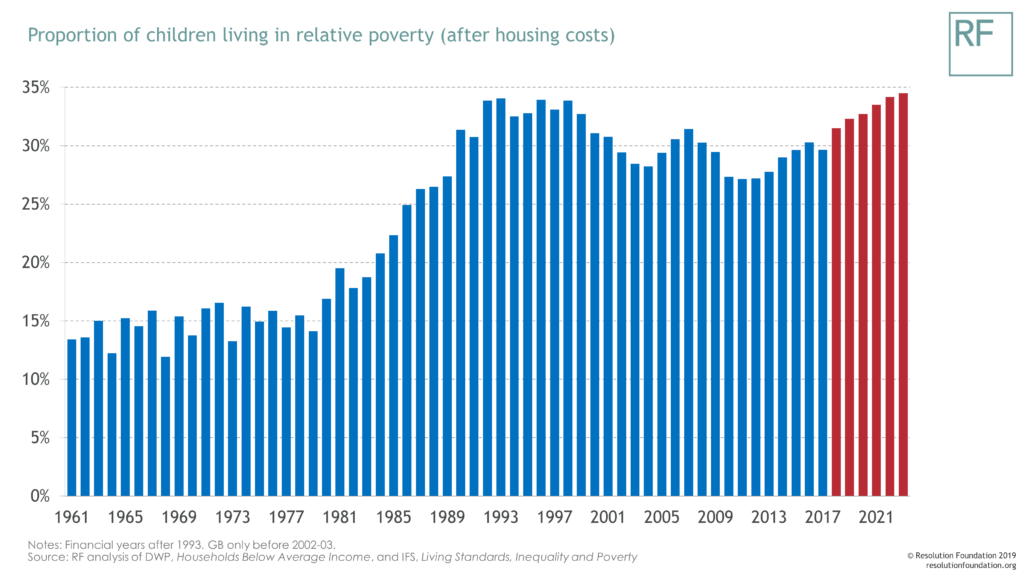 All of this helps explain why public attitudes have shifted in recent years to 60 per cent wanting more tax and spend, vs 4 per cent who want to see both fall.

Obviously, tax cuts are not the only policies being discussed in this leadership election. There is Brexit, of course, and welcome discussions of a higher minimum wage from Matt Hancock or the need to deliver for the young on housebuilding from Jeremy Hunt.

But big tax cuts, and potentially big tax cuts just for the rich, are dangerously close to being the big idea that comes out of this leadership contest. Wanting lower taxes is understandable, but promising huge ones in the here and now reflects a lack of understanding of where our country stands today, its challenges and its needs.