We’re emerging from the Covid crisis, slowly and, thanks to the Delta variant, not so surely. During the pandemic, scientists have understandably been centre stage, helping us understand the virus and its spread.

But economists and other social scientists have done their bit too. Badly needed emergency policies have been developed. Some, such as the furlough scheme,[1] have been implemented, and some – most disastrously in the case of better sick pay[2] – have not.

Economists have been grateful that the crisis’s health rather than economic cause means they are, for once, not under attack for failing to forecast the recession. Instead they have concentrated on attempting to provide close to real time assessments of its impacts:…

a huge labour market shock focused on low earners, the young and the self-employed. They have countered claims of a trade-off between health and economic outcomes, the flawed belief in which goes a long way to explain the UK’s much deeper than average economic hit in 2020.

Figure 1: Lower earners have been hit hard by the crisis 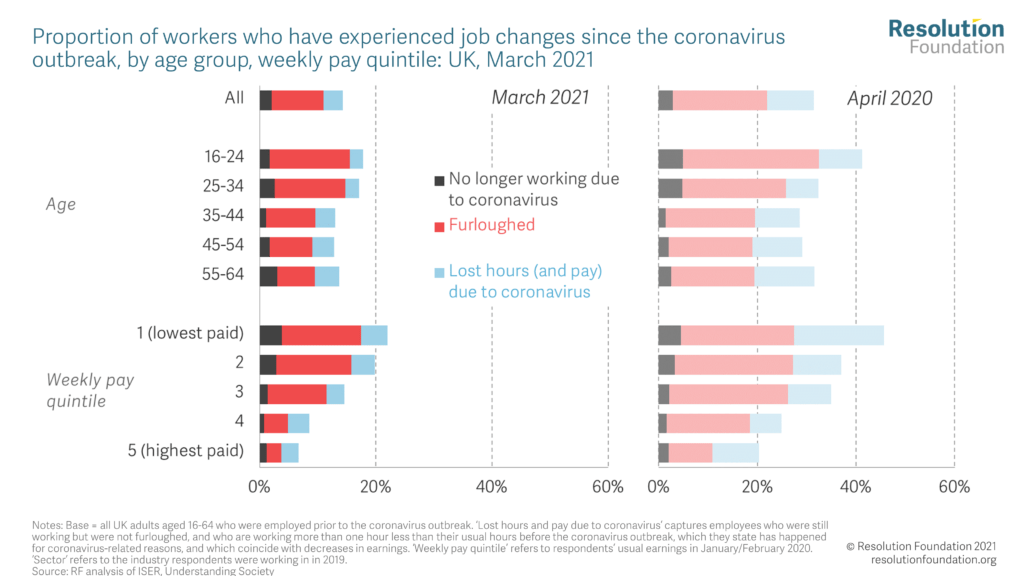 In the coming phase of our nation’s emergence from Covid, biological and social scientists again have distinct roles. The former are the heroes of the swift development and updating of vaccines that makes any emergence from this nightmare possible. Social scientists meanwhile have a key job in helping policy makers think about what the lasting impact of this pandemic will be, and how that informs what comes next for policy.

Most attention has been focused on speculating about how much of the huge mid-pandemic behavioural change (partly voluntary, partly legislated for) will outlast it: in particular, the growth of online retail and home working. Online retail has skyrocketed since the onset of the pandemic: from 19 per cent of total retail sales in February 2020 to 36 per cent this January, though this has fallen back to 30 per cent in the most recent numbers. Only 5 per cent of workers worked ‘mainly from home’ pre-pandemic, but almost half of us who worked during the last year’s lockdowns did so from home.[3]

Figure 2: The pandemic has turbocharged the move to online shopping 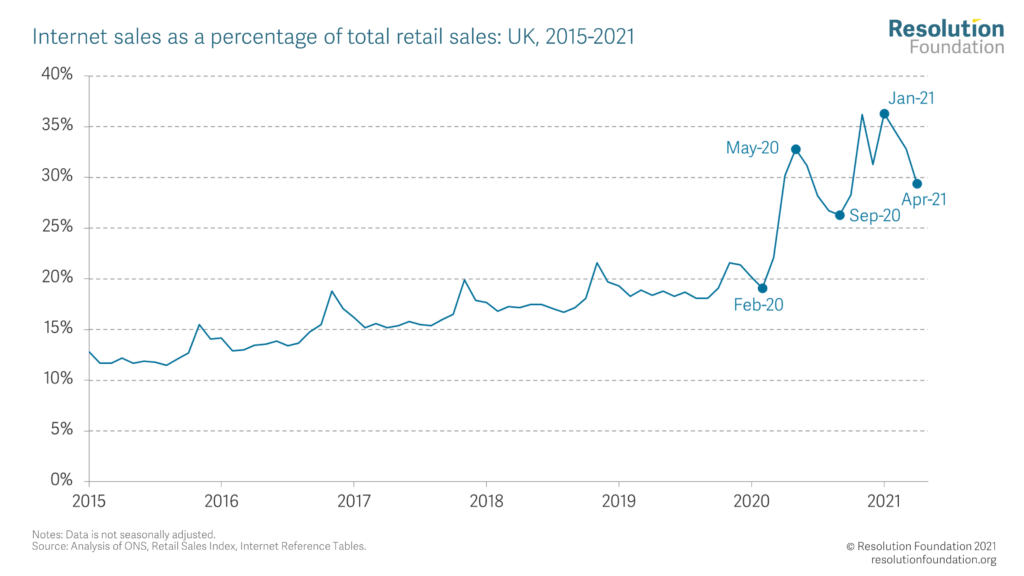 If even small fractions of these changes last, significant economic impacts will follow. Only half of the increase in online sales during the first lockdown was reversed during the summer 2020 opening up, so policy makers should prepare for a speeding up of the decline of retail as an employer and of high streets as retail venues. And most of those currently working from home expect to continue doing so on a hybrid basis post-pandemic.[4] That may be a welcome lifestyle change for some professionals and could spread well-paid jobs geographically. But for those, generally lower earners, who provide local goods and services, it could mean significant economic disruption as they are forced to find new jobs in new places. It could also require major changes to public transport and land use.[5]

But the scale of these changes is very uncertain. Policy makers should reject the wishful thinking of those claiming to have total foresight about lasting behavioural change transforming our economy and society for the better. Instead, they should embrace the reality of that uncertainty and the ambiguity of its impacts for different people and places.

However, we must also not allow the fascination with speculating about uncertain change blind us to some lasting impacts of the pandemic that are painfully certain. One highly unequal impact stands out. In the UK, unprecedented economic policy interventions have provided £186 billion of support to households and firms.[6] The result is that despite 2020 seeing the biggest annual fall in GDP for 300 years, aggregate household income has been broadly similar in 2020 to its 2019 level.

Figure 3: Aggregate household incomes were protected from the large fall in GDP 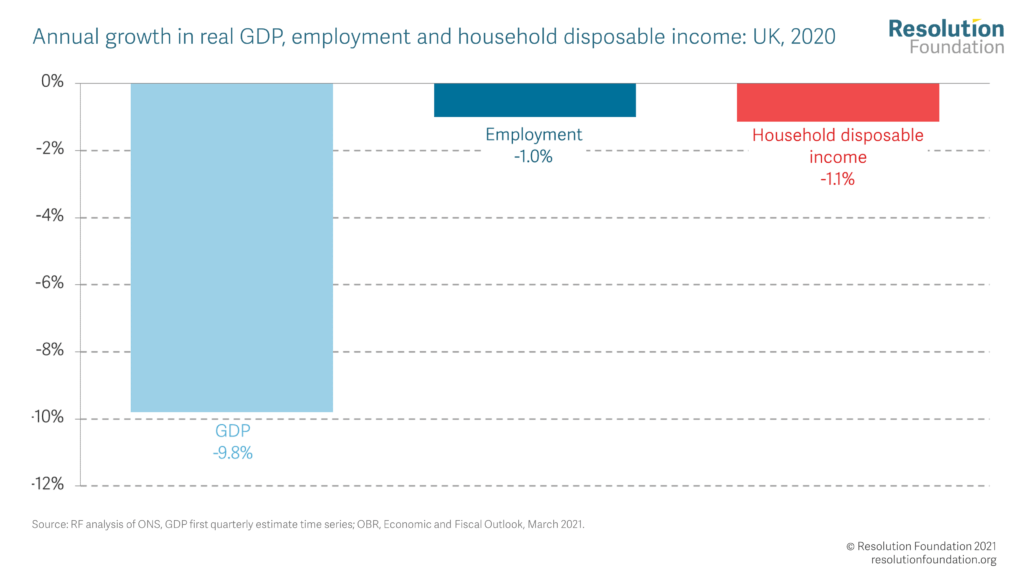 Those income hits that have taken place have been relatively flat across the income distribution. But this does not mean the crisis will have no lasting impact on family finances –or that the impact will be equally felt. This is because the pandemic has had dramatic consequences for household spending, down 10 per cent on the previous year over summer 2020 due to government restrictions and people choosing to reduce their virus risk. Higher income households spend a greater share of their income on holidays and hospitality, so these households have consistently been most likely to see spending falls. In contrast many poorer households have actually spent more, with lockdowns and home schooling removing many of the means by which people manage on a low-income – such as travelling further to a cheaper shop. In September 2020, over one-in-three (36 per cent) low income households with children had increased their spending during the pandemic, compared to only one-in-six (18 per cent) who reduced spending.[7]

While we have seen huge increase in household savings —around £150 billion to April 2021[8] — in aggregate, these spending patterns have fed through into the lasting inequality-enhancing impact of the pandemic: higher saving for the better off as they commute and holiday less, but higher debt for the poor forced to spend more.

Figure 4: The richest have saved more and the poorest have taken on more debt 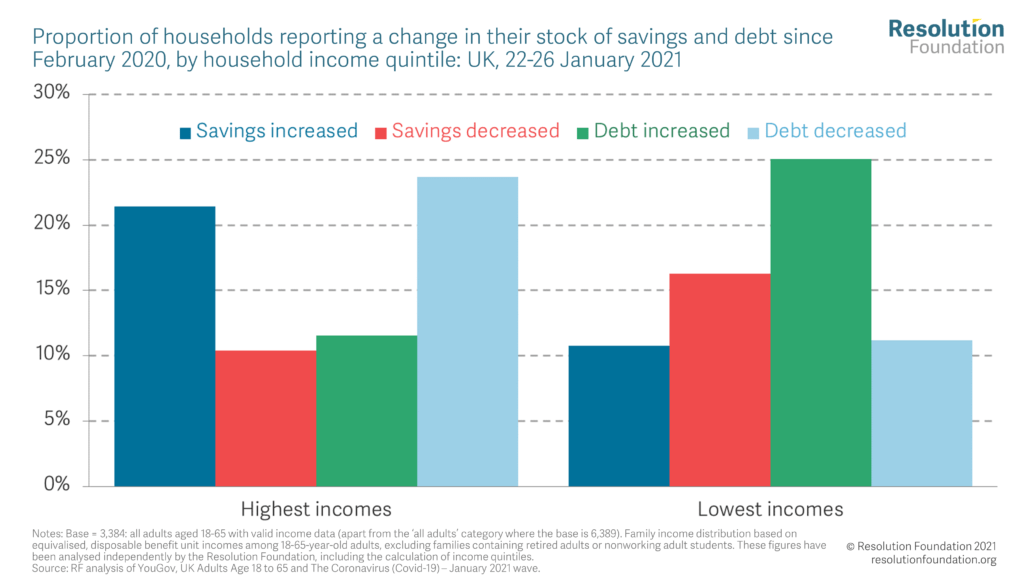 It’s well understood that, while Covid-19 has touched everyone, lower-income families have borne the brunt of the risk to their lives: the Covid-related death rates in the most deprived parts of the country have been around four times higher than in the least deprived areas.[9] But while that grim pattern will fade with the virus, the unequal impact on household balance sheets will remain long after. So, for that matter, will the experience of long periods out of work for our young and lower paid workers: by January 1.9 million people had spent the past six months without work[10] (i.e. unemployed or on full furlough). History shows that will potentially scar people’s employment prospects for years to come.

These certainties should not be forgotten as we look to rebuild post-pandemic Britain, and wrestle with the huge uncertainties of how we will shop or where the office workers among us will type.

[1] Doing what it takes: Protecting firms and families from the economic impact of coronavirus, Resolution Foundation, March 2020.

[4] A Casey, Business and individual attitudes towards the future of homeworking, UK: April to May 2021, ONS, June 2021.

[9] ONS, Deaths due to COVID-19 by local area and deprivation.

[10] N Cominetti, K Henehan, H Slaughter & G Thwaites, Long Covid in the labour market: The impact on the labour market of Covid-19 a year into the crisis, and how to secure a strong recovery , Resolution Foundation, February 2021.

Right Where You Left Me?
Analysis of the Covid-19 pandemic’s impact on local economies in the UK
11 June 2022
·
Mike Brewer, Jack Leslie, Lalitha Try
Leaving lockdown
Young people’s employment in 2021: improvements and challenges in the second year of the Covid-19 pandemic
31 January 2022
·
Louise Murphy
Social mobility in the time of Covid
Assessing the social mobility implications of Covid-19
26 December 2021
·
Andrew Eyles
Back to top