‘The UK’s gender pay gap has reached a record low of 8.6 per cent for full-time employees,’ read today’s headlines. This is certainly true, on the whole. But averages inevitably mask a wealth of compositional effects which show that large gains for some unwittingly offset not-so-large gains for others, as well as some not-quite-so-rosy trends behind the figures.

The gender pay gap dropping to an all-time low is of course something to celebrate. And the recent legislation requiring large employers to record gender pay gaps shows that, when it comes to tackling gender-based pay inequality, we are definitely on the right path. But, as Figure 1 shows, the rate at which we are moving towards greater gender equality has slowed in the years since the crisis. Between 1998 and 2007 the gender pay gap narrowed by 3.5 per cent a year on average for full time employees, but this slowed to 3.2 per cent a year between 2007 and 2018.

Figure 1: The speed at which the gender pay gap is shrinking has slowed since the 2008 crisis 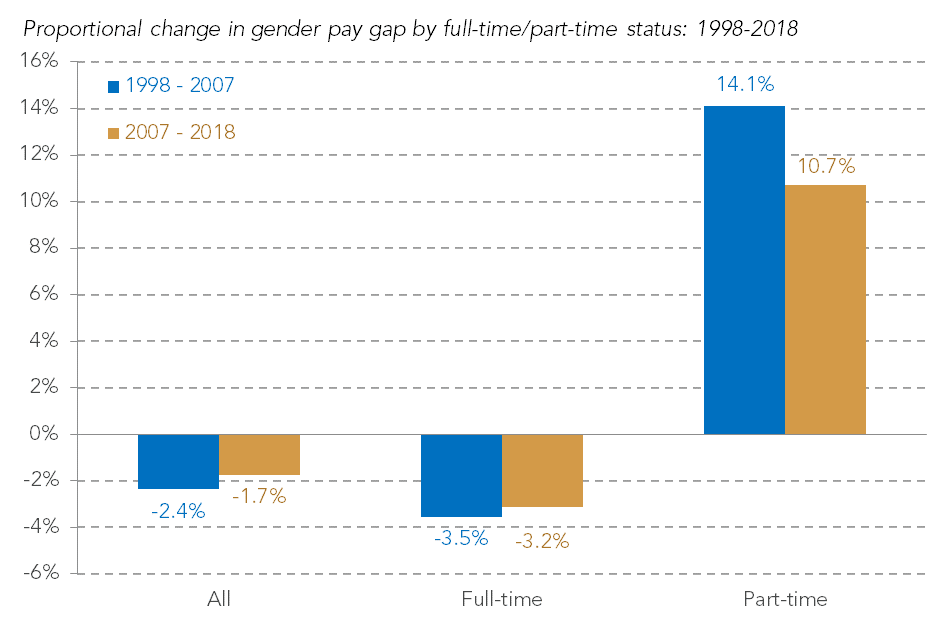 Figure 2 shows that the gender pay gap has all but disappeared for younger full-time employees. This implies a positive generational shift towards greater equality, which again is good news. But the reappearance of the gender pay gap for people aged 40-49 is a cause for concern. What we see here is women returning to work after a period of child-rearing. During this period, when women would typically be out of paid work, a gap in experience appears to open up, giving way to a large pay gap. This raises important questions about the gendered division of unpaid household labour, which continues to fall disproportionately to women.

Figure 2: Gender pay gaps have almost disappeared for people under 40 but open up again for over 40s 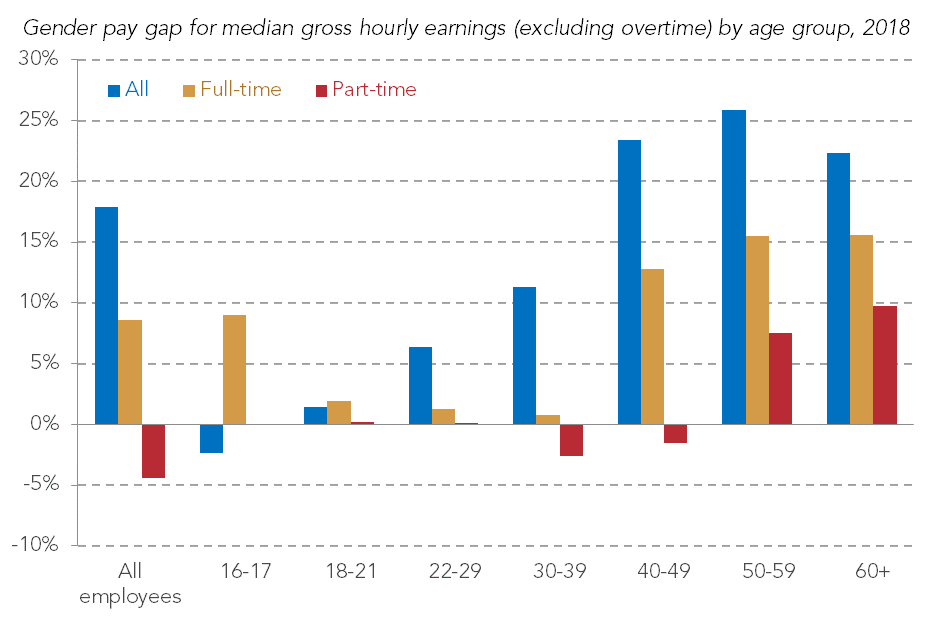 Figure 3: The gender pay gap has fallen most for 40-49 year olds 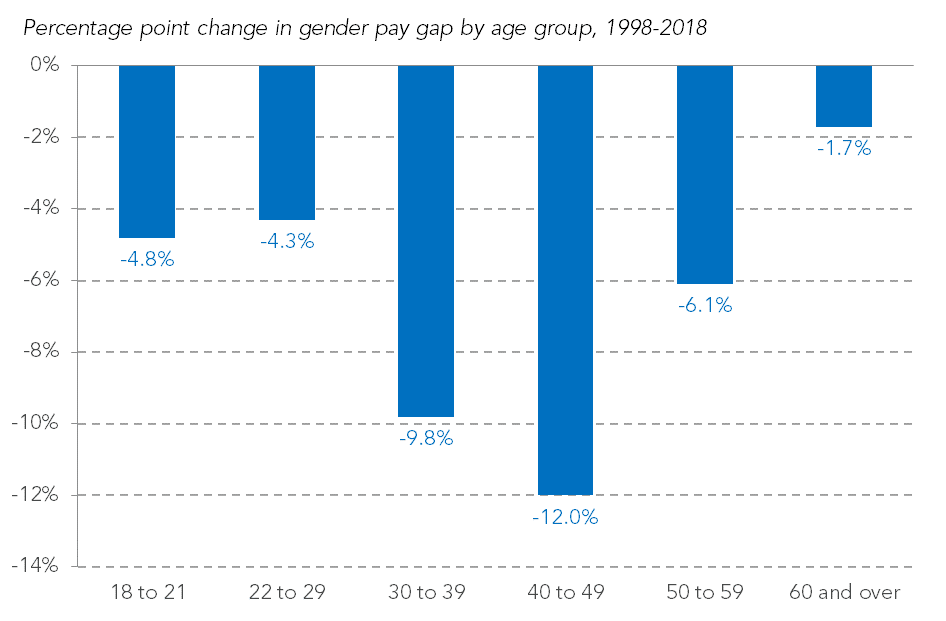 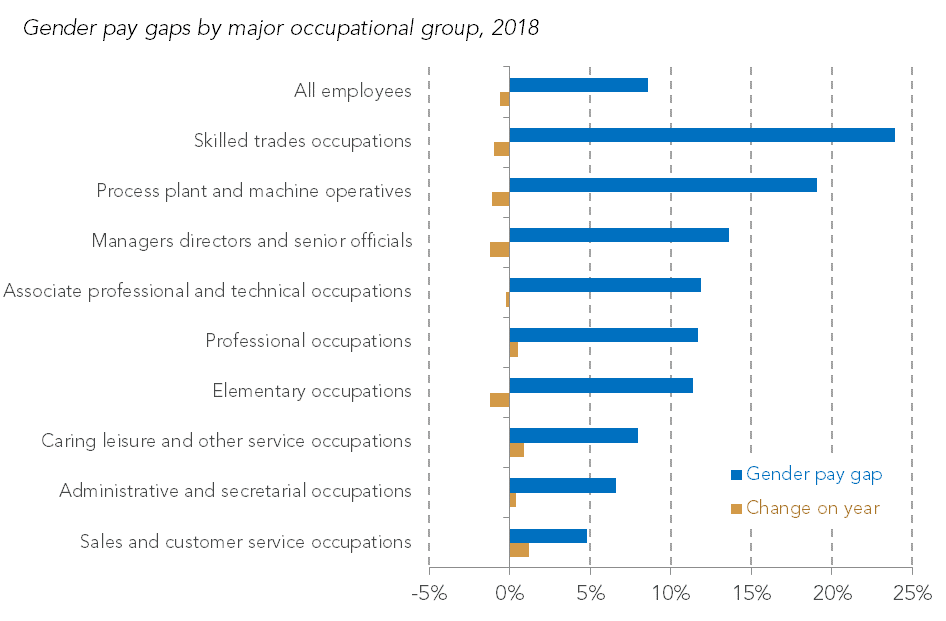 But while the gender pay gap appears to be falling in those traditionally male occupations, it is rising in sectors where women are over represented. What is particularly concerning though, is that gender pay gaps also appear to be rising in professional occupations, i.e. some of the highest paid jobs.

Lastly, a geographical conundrum. Figure 5 shows that the gender pay gap has fallen across the UK, everywhere except in London. The capital has gone from being the region with the second lowest gender pay gap of 15 per cent to the region with the highest pay gap of 13.7 per cent. We can speculate that this is down to the fact that London increasingly has the most high paying jobs, where gender pay gaps remain among the highest and in some cases appear to have grown. But things are very different in Northern Ireland (an area which definitely doesn’t have a concentration of high pay) which has had the biggest fall from 14.8 per cent to a negative pay gap of -3.5 per cent. 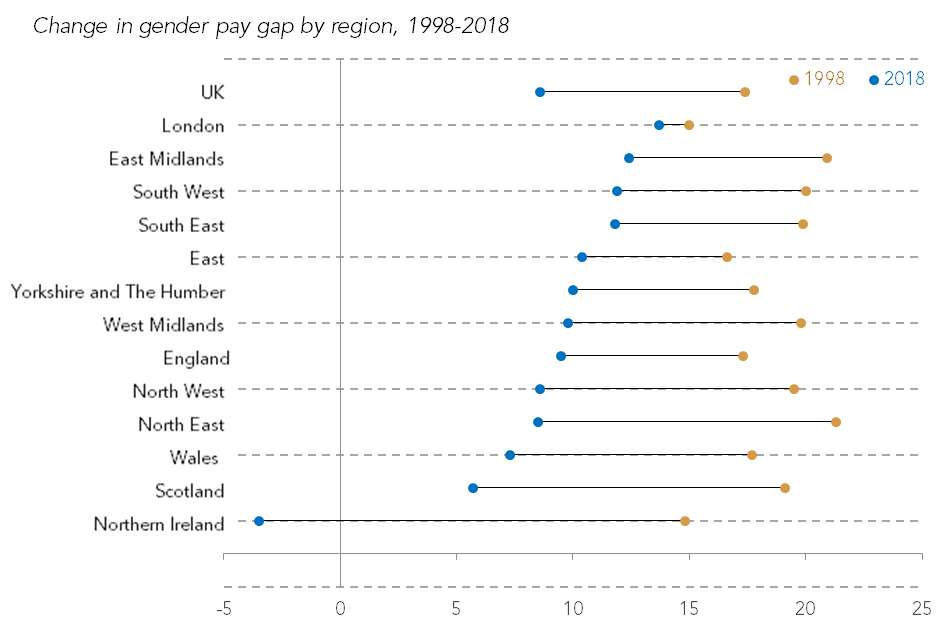 Clearly gender pay gaps are falling across the board, and even if the rate of change has dropped this is still positive news. But, now that we are making progress it’s important to tackle areas where the march to gender equality has slowed down. That is why it is always worth digging beneath the headlines to understand where there is shade as well as light.