Spring is spung. Or at least the Spring Statement is springing forth next Wednesday. It’s likely to be sandwiched between rather important Brexit votes, so don’t expect the usual media focus. But it’s worth thinking about what we should be discussing. To put it another way…. Imagine there’s no countries Brexit rows. It isn’t hard to do.

We’d want to see the Spring Statement putting the future shape of the state up in lights, with the Chancellor announcing what exactly bringing austerity to an end actually means. He could then look to the combined challenges of an ageing society and a changing economy, starting a conversation about the long term reform of our outdated tax system for the 2020s. You may say I’m a dreamer. But I’m not the only one. Hopefully. If you want to let your imagination free you can read our Spring Statement preview report – or watch our event on the same topic from earlier this week.

This week’s reads include advice on how to care for our towns, traders and toddlers. If you know anyone that needs such wisdom – from flailing parents to failing Presidents ­– forward this on, and ask them to sign up here.

Have a good weekend all.

Talking towns. This week Theresa May launched the Stronger Towns Fund to help areas “left behind”. Everyone got outraged about the new £1.6bn fund being a ‘Brexit bribe’, and outraged that the bribe isn’t bigger (fair on both counts, if inconsistent). Amid those rows, a thoughtful new blog from the Centre for Cities asks the real question we should be debating: how should we boost living standards in our (mainly Northern and Midland) towns? Their first answer is uncontroversial – increasing skill levels in less successful towns, with extra spending on further education (rightly) the top priority. Their second is much more controversial though – the thing holding back many of our poorer towns is not the success of their big cities nearby, but their lack of success. The conclusion – that part of the answer to supporting our towns is to ensure our big cities succeed and better connect our towns to that success – is good advice, but putting it into practice is complex. Cities can spread wealth, but they generally do so in places that better off commuters want to live, as this great read on Greater Manchester spells out. For more you can watch an event we hosted this week on the state of Greater Manchester’s economy.
Talking incomes. Everyone says transparency is a good thing. But would everyone be happier if they could see how much everyone else earns? We can turn to Norway to find out. Across the North Sea every citizen’s income is available online. Gulp. New research tests the impact of this transparency on happiness – and it’s not good news people. Making incomes transparent increased the gap in happiness between richer and poorer individuals by 29 per cent. The authors suggest this is because transparency changed people’s perceptions of their relative income (ie the poor realised they were poorer than they thought and the rich richer). Now maybe in the long term transparency pays dividends by increasing pressure to reduce income gaps. But in the short term it just makes the oligarchs ecstatic and the rest of us morose.
Talking class wars. How sorry should we feel for the ‘squeezed one-percenters’ – their plight documented in this FT article (£) – who live on six figure salaries but struggling to pay for the things that the upper middle class used to take for granted (apparently horses and private schools)? Obviously not very is the easy answer, but a more thoughtful one comes in new blog from the always interesting Chris Dillow. He reminds us about the huge gap between those just in the top 1% (incomes around £120k) and the very top 0.1% (on over £500k) and notes that it’s natural for 1% to resent the very top more than for instance the poor might. That’s because they see them up close and aspire to the houses they very richest price them out of. They also have more in common with those on much lower incomes in the sense of not having control of their lives in the way the very richest do. So, class war is alive and well amongst the top 1%. If you’re feeling especially empathetic with the rich spare a thought for the top 0.01% – who have it hard too, apparently.
Talking trade wars. The big global economic news last year was the Trump/China trade war. But who won the war? Two papers out this week say that almost all the hit from increased US tariffs was born by US consumers – via higher prices and less import variety. Now Trump would say the real impact is driving a long term change in China’s behaviour. Maybe. But in the short term Americans are losing out.
Talking news. News is meant to be a record of the past, but what if we told you that the news could predict the (economic) future. Or more precisely that the news can predict GDP growth. Well, new research from the Bank of England suggests it can (a bit). An algorithm uses news articles from the Guardian (because it’s free, not because the Bank’s full of hippy liberals…honest) to shed fairly similar light on the UK’s current economic performance ahead of official GDP data, in the same way as conventional indicators like business surveys. The blog reminds us of the words of Arthur Miller, ‘A good newspaper, I suppose, is a nation talking to itself’.
Chart of the Week. It’s International Women’s Day today so you’ll likely hear lots about the gender pay gap – how far it’s fallen, and how long before it closes altogether. Transparency is helping address some of the most ludicrous pay gaps, but arguably the biggest barrier to closing this gap completely is parenting, or more specifically the very gendered effect it has on employment, as this week’s Chart of the Week shows. The good news is that since the 90s men have more than trebled their share of the employment hit from parenting – leaving employment, switching to part-time work, or reducing their hours. The bad news is that despite all the articles about modern men pulling their weight, women are still doing 93 per cent of the employment sacrificing. Time to start learning lessons from other countries, such as Iceland – where mothers and fathers get three months of generously-paid leave each. Or Spain, where paid paternity leave is in the process of being increased to 16 weeks to reach gender parity. Having made tentative steps in the right direction, it’s time to walk further and faster… 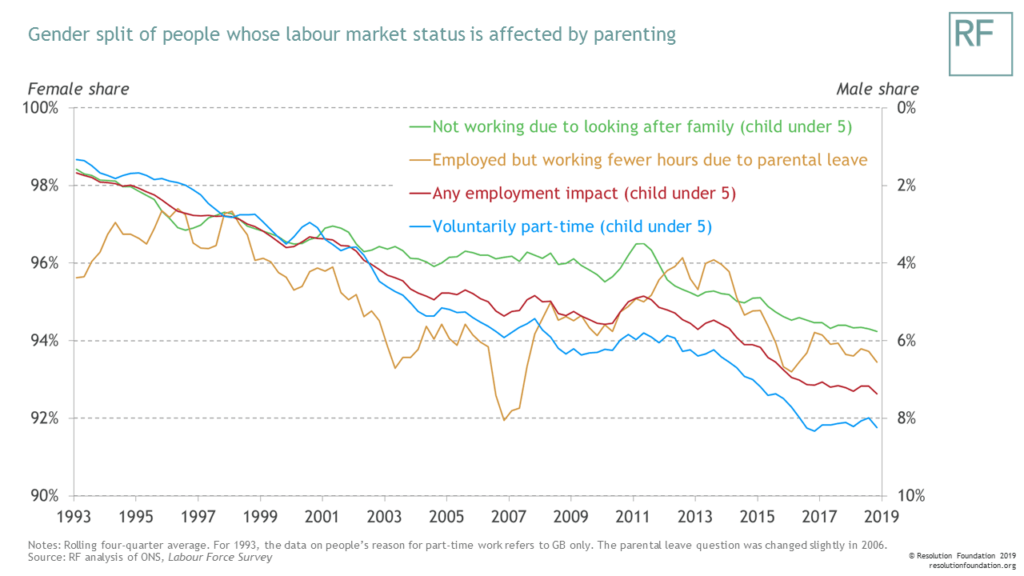