The country’s roasting, Glastonbury’s rocking, and the Lionesses are roaring into the World Cup semi-final. The only people letting the side down are our cricket team. Now I’m no expert on bat/ball games, but I fear they’ve been paying just a bit too much attention to Boris. Surely the point of being the clear favourite going into the most important competition of your life isn’t to make converting that into actual victory as complicated as humanly possible.

Anyone that can actually work out what permutations of results get England through to the cricket world cup semi-finals has probably got what it takes to come do some slightly more socially useful research at RF – apply here!

For the rest of us, enjoy the weather and this weekend’s selection of reads – from big demographic tides to how we think about economics.

Demographic tides. It’s been a very interesting few weeks for population stats. This week the ONS released some surprising data on the UK population. In the year to mid-2018, there were the fewest births in over a decade and the highest number of deaths since the turn of the century. Slower population growth is the result – our twitter-based take is here and Chart of the Week has more. Last week the UN also revised down its population forecasts. New data (superbly and succinctly analysed here) suggests that that the world will contain just under 10.9bn by 2100. This figure is 309m lower than previous estimates – the equivalent of revising away the population of America. Some people will welcome a smaller population for the globe to sustain, but this isn’t all good news. America’s opioid epidemic has pushed the death rate up so that the chance of a 15-year old-old boy dying by the age of 50 is now higher in America than in Bangladesh.

Fake news. We hear lots about the rise of fake news – and the depressing conclusion is that it will inevitably succeed in influencing us weak-minded humans. So for some optimism we bring news that an online 15-minute game has been created to increase ‘psychological resistance’ to fake news. The game, Bad News, allows players to stoke anger and fear by manipulating news and social media within the simulation: deploying twitter bots, photo-shopping evidence, and inciting conspiracy theories to attract followers. Researchers conducted a large scale study of the game and found evidence that people’s ability to spot and resist actual fake news improves after gameplay. So get playing to vaccinate yourself.

Econ 101. In the wake of the financial crisis, students around the world called for a shake-up of the economics discipline, feeling that their courses were leaving them ill-equipped to explain what had happened. The result has been a near industry-wide period of re-thinking. But, as always in life, there’s a lot more talking than doing. One huge exception to that is the new CORE curriculum developed in huge detail by the UK’s Wendy Carlin, among many others. The modest goal is to provide “accessible, relevant, real-world economics teaching, available and free to everyone”. For those not already familiar with this work, a forthcoming paper provides a really helpful overview of the motivation and approach. It joins the critique of the status quo in arguing that new problems (inequality/climate change etc) require new ways of thinking. But its noteworthiness is more in showing that the tools we need to do that are both readily available (from behavioural insights or a recognition of path-dependencies) and can be taught.

Elitist Britain. A new study finds that Britain’s top jobs are still in the hands of the private school elite. You’re shocked I know. 44% of top politicians, 31% of business leaders and 29% of creative industry leaders attended private school, compared to 7% of the population. Almost 40% of the cabinet were privately educated – which reminds us how bad things remain diversity wise, but also shows how far we’ve come. Today a Tory cabinet has a majority of state school kids, whereas only one member of Thatcher’s first cabinet, apart from Thatcher herself, wasn’t educated privately. Where in British life bucks the trend? Interestingly sport (particularly football), the arts and local government were the areas with the lowest numbers of members coming from socially exclusive educational institutions. Time to feel sorry for any keen footballers at Eton.

Flying fellows. Academics are bright people – so they know flying is plane naughty as the world heats up. Yet they jet around the world to conferences and the like, telling themselves that it’s essential to both the exchange of old, and the production of new, knowledge. Awkwardly a new study digs into whether it’s true that the “best” (i.e. knowledge-producing) academics fly more via a case study of the University of British Columbia. The answer: there’s no link between flights and research quality (measured by citations of papers) – just between how highly-paid academics are and their air miles. The paper also finds that academics working on green issues don’t travel any less. Do what they say, not what they do.

Chart of the Week London’s population is booming. But that overall takeaway masks big – and nuanced shifts – in who exactly is coming and going. While overall net international migration has tailed off in the wake of the EU referendum, it has stabilised in London at around 110,000 – not far off pre-referendum levels. But it’s a different story if we look at internal migration (i.e. people moving within the UK). For the last three years, London has lost 100,000 people (net) a year to the rest of the country. While around 35,000 people in their 20s consistently move to the capital every year, an even greater number of people in their 30s leave. Despite London now having nationally-leading schools, the housing push factors once people want to settle down are too great. Prepare for social unrest in the likes of Bristol and York as anti-Londoner sentiment evolves from “they’re taking all the good jobs” to “they’re turning up and nicking the houses”. 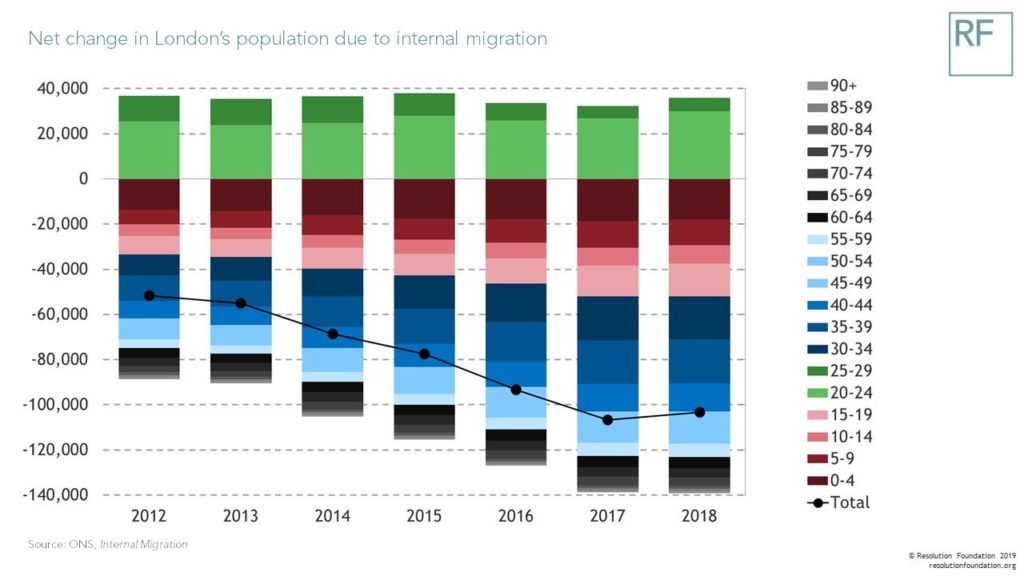