TOTCs is a safe space this week, a haven of tranquillity. You cannot vote on TOTC (meaningfully or otherwise). It cannot be amended or extended. It makes no claims to represent or to betray the unique will of the people. The only similarity it has to Theresa May is that, bad as the world has got, TOTC will keep on going, week in week out, helping you take back control of weekend reading plans come rain or shine. Simples.

Meaningful parents. Last week TOTC was feeling sorry for the squeezed top 1 per cent. But we take it all back following news that they’ve been lying, bribing and faking their kids’ ways into top universities in the US. Nearly 50 individuals, including celebrities, across six states have been charged as part of the college admissions scandal. What’s particularly stupid is that in the US there are loads of ways for rich parents to get their kid into a top uni without breaking the law – just cough up for a building or spend a fortune on sports. More seriously – there’s an important lesson here about  protecting spheres of life from the spreading impact of fast growing wealth, as we’ve set out before.

Meaningful tech. The Spring Statement came and went on Wednesday, but buried within it was something worth pausing on. A major review of competition in digital markets (i.e. what we should do about big-tech firms and their market dominance) reported to the Chancellor. The report – from Harvard professor Jason Furman and the UK’s own Diane Coyle (summary blog) among others – takes a nuanced approach. It reminds us that consumers can benefit from large tech firms, and rejects popular answers like breaking them up or regulating them like permanent natural monopolies. But it does call for more active behavioural regulation of the biggest firms, more competition ­– by ensuring data is portable across platforms – and more blocking of incumbents from buying up potential challengers. Not everyone will think it goes far enough, but in a polarised debate it has a lot to add.

Meaningful minimums. While we’re on reviews for the Chancellor, he commissioned a new one this week into the latest international evidence on minimum wages – as part of his goal to further raise the level of the National Living Wage in the 2020s. The good news for all of us is that he’s asked a real expert to do the work. Professor Arindrajit Dube has been pioneering the evidence base showing that higher wage floors so far have not led to the job losses many predicted. He wrote a fascinating essay for us a few years back. He is also an interesting pick given he is quite a lot more radical than the current policy intention in the UK. Here’s him calling for wage boards to set sectoral or occupational minimum standards. For some balance read this work in Denmark (older, free version), which shows that minimum wages can have big negative effects on young people’s employment. Something to ponder as the debate about whether the National Living Wage should apply to under-25s gathers pace.

Meaningful cash. A thought-provoking policy proposal from the New Economics Foundation this week looks to swap the income tax personal allowance (which means you don’t pay tax on the first £12,500 of earnings) for a universal payment worth £48 a week to everyone in or out of work (so long as they earn less than £125k a year). The paper rightly says that recent increases in the personal allowance have overwhelmingly benefitted higher income families – although there are much more progressive ways to raise taxes than scrapping it entirely. Encouragingly, NEF’s proposal avoids the problem many Universal Basic Income proposals have – that they’d increase poverty. But it has another big problem – creating very weak incentives for low earners entering and progressing in work because they would pay tax from the very first pound earned. When combined with Universal Credit, second earners in a couple (mostly women) would be worst affected. The lesson? Bold ideas always have big trade-offs.

Meaningful mergers While the Brits and Yanks want to break-up our superstar firms (or ‘their’ superstar firms in the case of the UK, as the aforementioned digital competition review wryly pointed out), over in Europe they’re desperate for some homegrown talent. No so fast, says those belligerent bureaucrats in Brussels when it comes to the merger of Alstom and Siemens – two huge train firms. This Bruegel post explains the spat between the EU Commission (pro competition) and France and Germany (pro European giants). This delve into the trade-offs of mergers has particular relevance over here given the apparent breakdown of the Sainsburys-Asda deal – and because we’re going to be doing a lot more of our own competition policy post-Brexit.

Chart of the Week Amid the Brexit votes chaos, the Chancellor delivered his Spring Statement this week. He showed admirable restraint on the policy rabbits front (which he promised not to produce). If you want the low-down on what it all meant for the economy and the upcoming Spending Review, read our ‘super, smashing, great’ overnight briefing. One message that came across loud and clear is that the Chancellor has promised to end austerity for public services if a sensible Brexit deal happens by spending a ‘Brexit dividend’. He certainly has more than enough headroom from lower borrowing to find the £9bn needed to prevent further cuts being part of the autumn Spending Review. But as our Chart of the Week shows, government departments – like humans – have history. Even if this £9bn Brexit dividend turns up, several big departments (like Justice or Business) will have seen their budgets all but halved since 2010. ‘Ending austerity’ is very different from ‘reversing’ it. 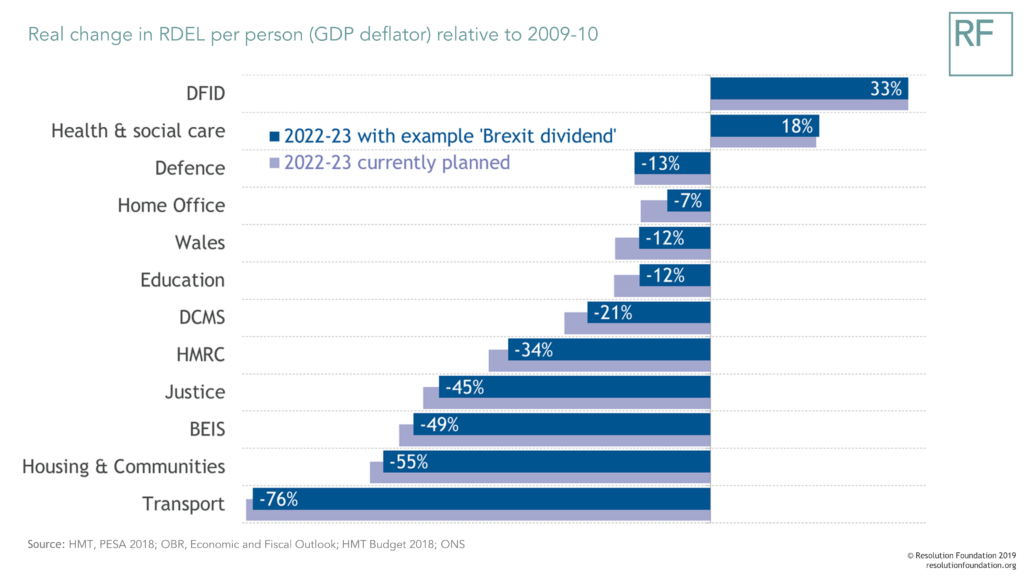