Britain is in the middle of a decades-long wealth boom. Total wealth now stands at a record £12.8tn, or almost 13 million millions. But where you live, and when you were born plays a big part in how much of that wealth you are likely to own.

In the 1960s and 1970s, Britain’s collective wealth – the value of our property, pensions and savings – was about three times as big as the UK economy’s national output, or GDP.  But since the 1980s, as wealth has boomed, it has surged to close to seven times the size of annual GDP. This growth continued even through the 2007-8 financial crises. 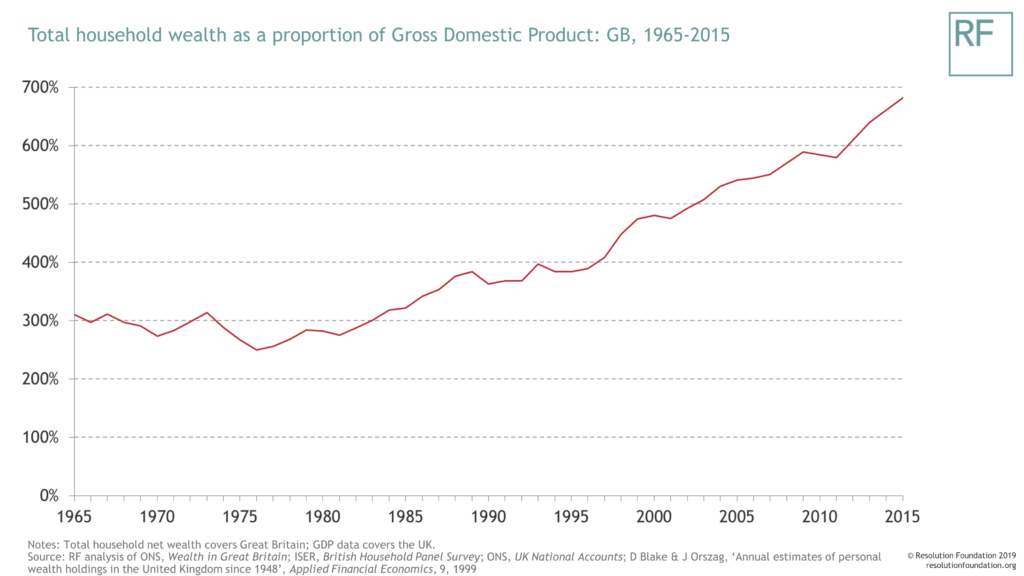 What is our wealth made up of?

Britain’s wealth boom has been driven mainly by rising house prices and pension entitlements, combined with rising home ownership in the 1980s and 1990s.

People often think of Britain’s wealth as being held in property and to an extent they are correct – at £4.6tn, it represents 36% of total wealth.

However, the total value of pensions is actually marginally bigger at £5.3tn – 42% of total wealth.

Net financial wealth – savings, ISAs, stocks and shares – is worth £1.6tn. Physical wealth – wealth in possessions – is harder to measure but, according to the latest data, we even own £4.3bn worth of personalised number plates. 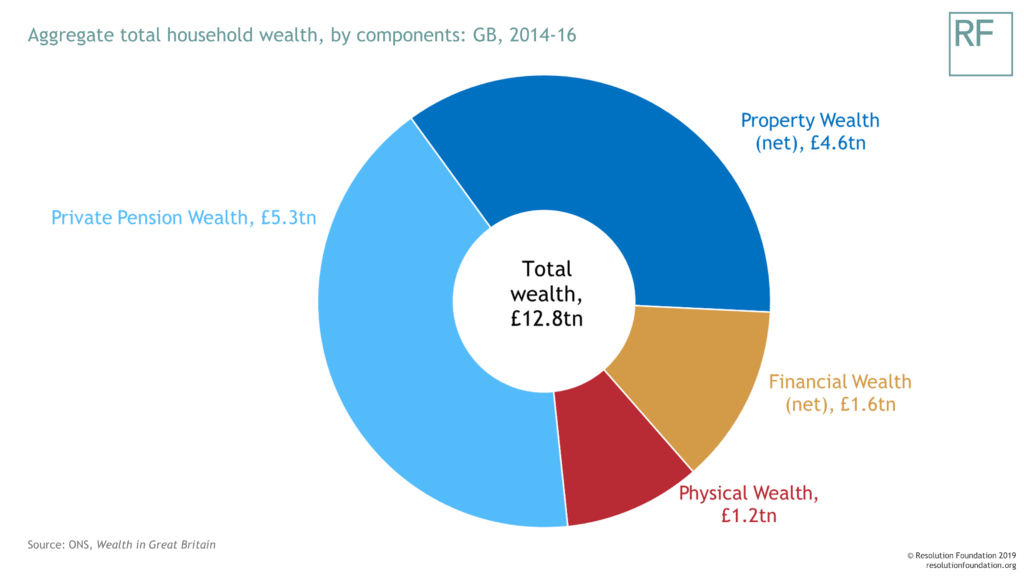 What does it take to be wealthy?

How much wealth do you need to be in the wealthiest part of the population? To do this, we break the adult population down into families, and then sort them into 10 equally-sized groups – or deciles – based on their wealth.

In 2018-19, you needed wealth of around £670,000 per adult ­– excluding physical possessions – to get into the richest tenth of families in the UK. Wealth of £105,000 per adult would put you in the top half of the population. By contrast, the bottom tenth of families tend to have more debts than they have property, pension and financial wealth.

While Britain has a lot of wealth, it is not shared equally across the country.

But this is not a story of ever-rising inequality.  In fact, the share of Britain’s wealth held by the richest 1% fell for most of the 20th Century, and has been stable ever since. This shift is mainly down to the sharp rise in homeownership.

We have moved a long away from the Downton Abbey-esque world of the 1920s. However, there are still enormous wealth gaps between different households. 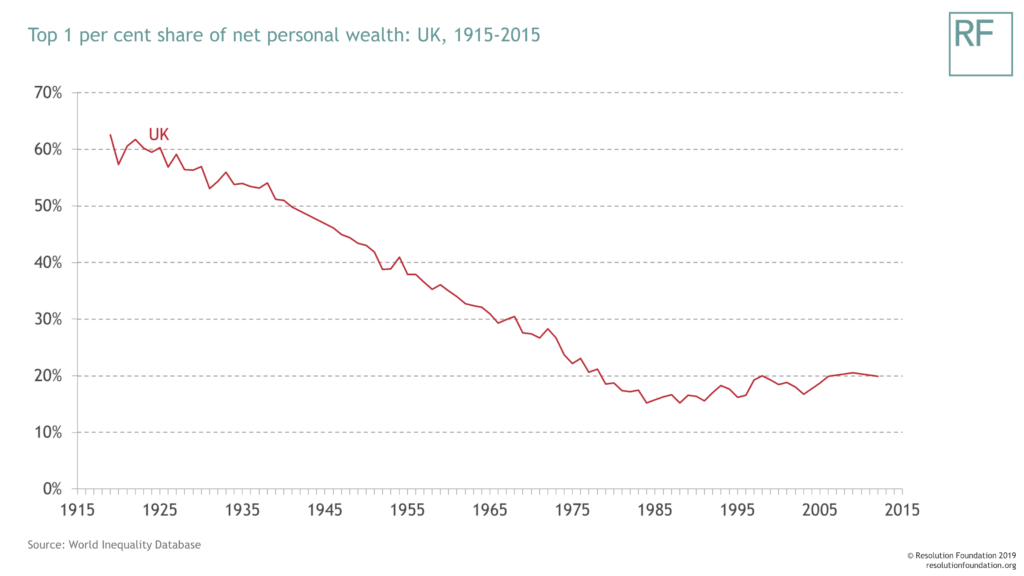 Much of our wealth is concentrated in London and the South East, where a few households have very large amounts of it.

This is because London’s population is young and home ownership is low, so a typical household has relatively little wealth. In fact, high-wealth households in the capital have 24 times as much wealth as low-wealth ones. 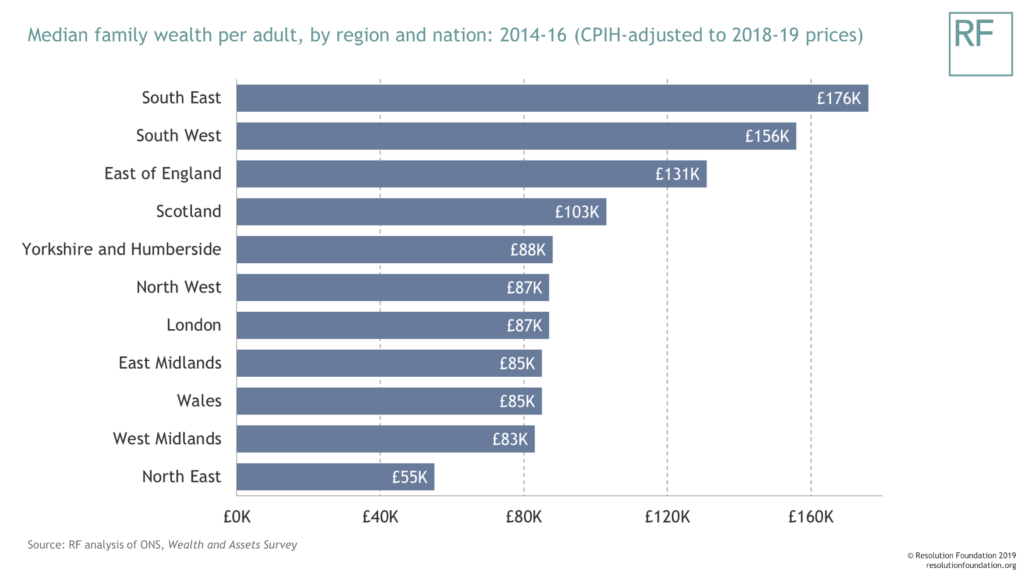 Many of us aim to build up wealth over our lives, from getting on the property ladder to saving and investing, and watching our pension pots grow.

But younger people’s personal wealth is not growing at the same rate as their parents and grandparents. Those born from the mid-1960s onwards were less likely to have become homeowners in time to benefit from the rapid house price growth that started in the 1980s, or to have been enrolled in generous pension schemes.

This is part of the reason why sixty-somethings are the wealthiest age group, with average wealth equivalent to £332,000. Many are at the end of a career and have had time to accumulate savings, pensions and property. By contrast, those in their eighties have £186,000, while individuals in their 30s have just £55,000. 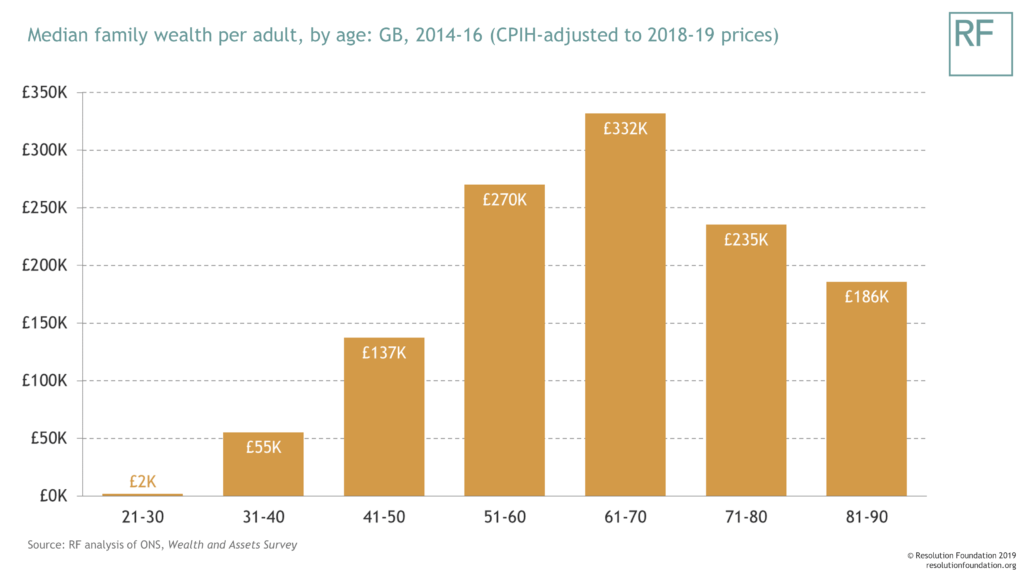 The impact of inheritance

The final stage of wealth is passing it on to the next generation though inheritance.

Inheritances have more than doubled over the last 20 years – and are expected to do so again over the next 20 too, as larger, wealthier generations pass through retirement. This means millennials – the generation currently aged 19-38 – are set for an inheritance boom in the future.But it’s a long way off, with the average millennial not expected to receive it until they reach 61; that’s far too late to help them onto the property ladder.

And those are the lucky ones. Nearly half of Millennials who don’t yet own homes have parents with no property wealth, meaning they are unlikely to receive a significant inheritance. By contrast, those with home owning parents are three times as likely to own a home by the age of 30. 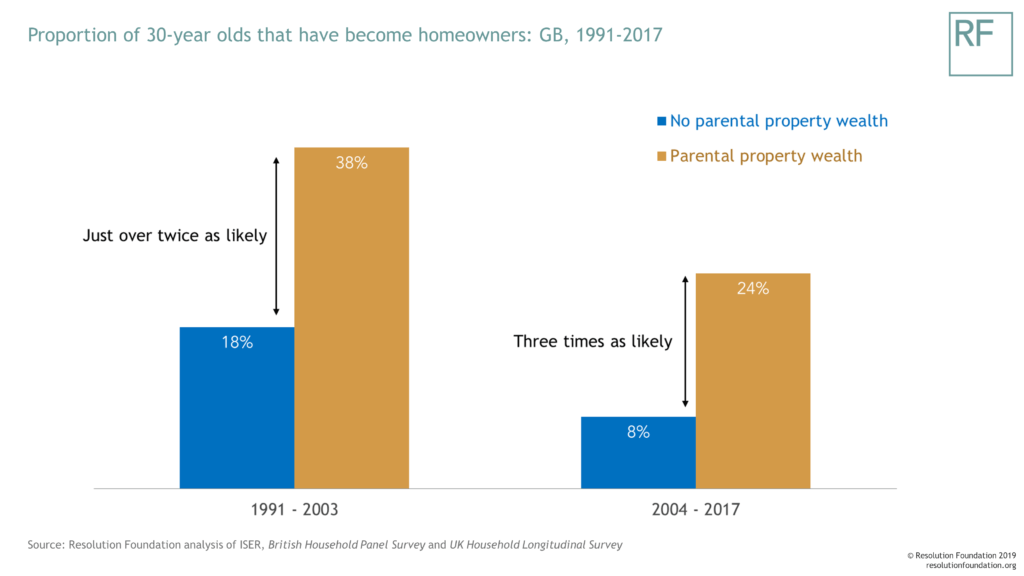 Why does the size and distribution of Britain’s wealth matter?

Many hope that hard work and a good job means you can earn your way to prosperity. But large wealth gaps mean that whether you receive an inheritance could become the most important factor.Those without this source of wealth are more likely to face long-term housing insecurity, higher private rental costs, and insufficient funds for their retirement.

Britain is doing a pretty good job of growing its £13tn wealth pile, but less well at sharing it equally. How much wealth we have is often regarded as a private affair, but who holds it and how it is accumulated matters for the wider economy, and society as a whole.

This article was originally published as part of the BBC’s Expert Series.