Low pay in Britain is an issue of national importance. With around one-in-five employees classed as low paid, the share of Brits who fall into this category remains well above the levels achieved by the best-performing countries in the OECD.

That said, within Britain, there are huge disparities in terms of where low pay is most prevalent. Our latest study of low pay in Manchester – being published on Tuesday – finds that most city regions have low-pay rates above the national average. That puts their low-pay prevalence at least twice as high as that in London (10 per cent). In some cities, including Sheffield and Tees Valley, almost a quarter of employees are low paid. 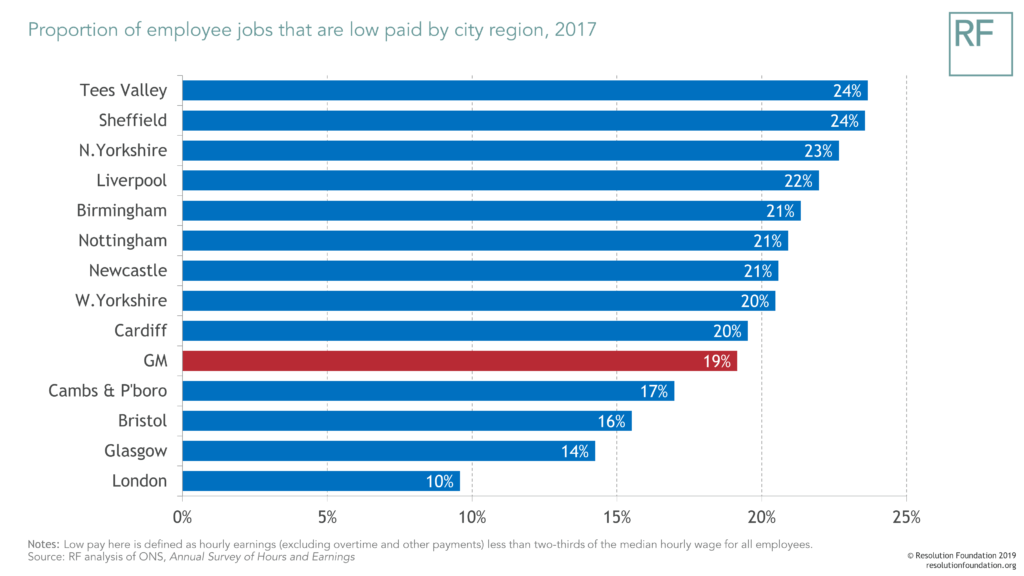 This issue, which looks set to endure, poses a tough challenge for our city regions. Routes out of low pay appear limited: our report notes that one-in-three (35 per cent) of those who were low paid in Greater Manchester in 2012 were still in low-paid work four years later. Again, the extent of this varies by city region with London having the lowest proportion at 29 per cent and Newcastle the highest at 43 per cent.

In Greater Manchester around one-in-three of those stuck in low-paid jobs for over a decade was a sales assistant or a cleaner. Other occupations offer greater opportunities for progression, with teaching assistant and nursing auxiliary jobs more common among those who had progressed to higher pay.

This enduring low pay problem is compounded by the fact that relatively few firms and sectors account for high proportions of low-paid jobs in British cities. Retail and hospitality account for almost half of all low-paid jobs in Greater Manchester, with retail and wholesale accounting for 27 per cent of the area’s low-paid employees, and a further 21 per cent working in hospitality, tourism and sport.

Moreover, five employers account for 11 per cent of all low-paid employees across Greater Manchester. This risks leaving staff with a lack of choice about where to work and, as a result, weaker wage bargaining power.

While our city regions face a number of shared challenges, Greater Manchester itself faces several unique ones. Even within the city region, there are large disparities resembling something of a centre-periphery split. Approximately one-in-seven of those working in Manchester and Trafford are low paid, compared to one-in-four in outlying areas, such as Rochdale, Wigan and Bury.

And of course, the likelihood of being low paid isn’t just determined by where a person lives. Across Great Britain we know that BAME groups are more likely to be in low pay than their white counterparts. But in Greater Manchester, the risk of low pay for certain ethnic groups is elevated in relation to the GB average. This is particularly the case for black employees, around a third of whom are low-paid in Greater Manchester, compared to a national average of 22 per cent.

Single parents are another group that fare poorly across Great Britain, but appear to face particular challenges in Greater Manchester. Two-in-five single parents (41 per cent) are low paid, far higher than the national figure of 33 per cent. 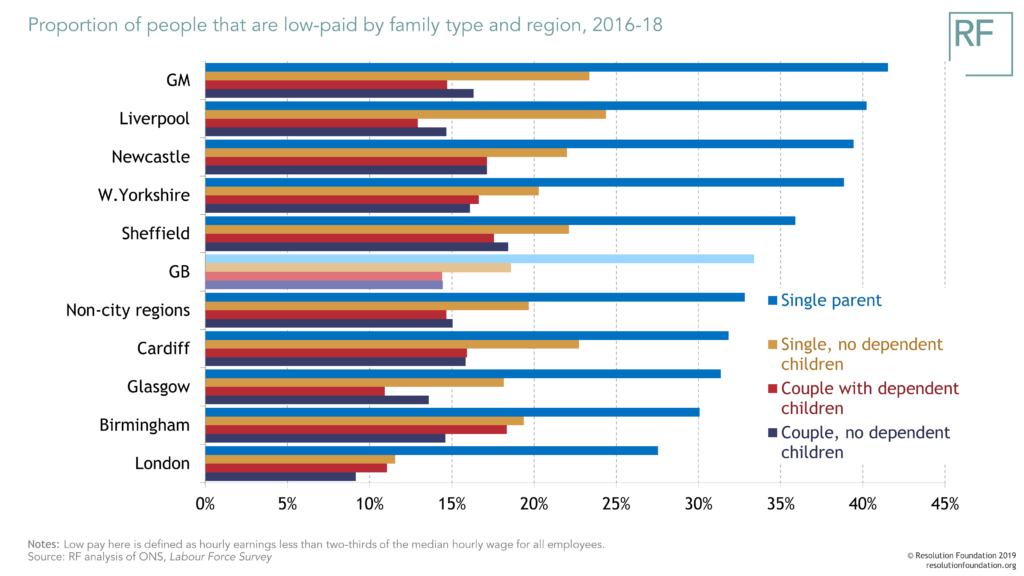 With its devolved powers, the Greater Manchester Combined Authority is well placed to lead efforts on issues of low pay. It has already led the way on similar issues in the past, with initiatives like the Working Well pilot (which provides support to people with health problems looking for work). The scale of the low-pay problem and the particular form it takes in Greater Manchester mean that significant opportunities for local interventions remain.

Developing a deeper understanding of local issues, such as why the risk of low pay appears to be particularly elevated for black people, single parents and those in the outer areas of Greater Manchester would be an important first step in getting to grips with low pay. Other options include convening sector-based discussions on how progression routes can be built within low-paid sectors, in order to offer low earners routes to better pay and higher living standards.

Of course, a national policy focus on tackling low pay – from the level of the minimum wage to boosting investment in technical and vocational skills – remains essential. But at time when national politicians often have other issues on their mind, our new metro mayors and other city leaders are right to be stepping up.