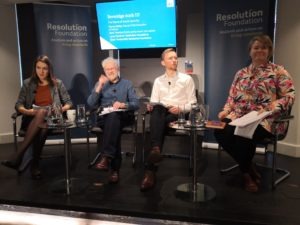 From a new ‘triple-locked’ state pension to big welfare cuts for young families and the roll-out of the Universal Credit, no area of the state has undergone such a radical transformation over the past decade as social security. That transformation is set to continue in the next parliament too, as Universal Credit is extended to half of all families with children – or scrapped altogether, as Labour say they plan to do. But while previously announced polices continue to roll-out, public attitudes have been on the move.

How have our social security system changed in recent years? What might the next five years mean for it? Will Universal Credit be roll-out, scrapped or reformed? What can we learn from a system that has reduced pensioner poverty to near a 60-year low, but allowed child poverty to climb to a 60-year high?

At its Westminster offices, the Resolution Foundation held an event to mark the publication of its final report on the changing size and shape of the state, focusing on social security. After a presentation of its key findings, a panel of leading experts will discuss the outlook for social security in the next parliament, assess the main political parties’ plans, and wider public opinion on the issue. An audience Q&A will follow.