Minimum wage increases since 2015 delivered a £3bn pay boost to low-paid workers last year – highlighting the benefits of cross-party consensus over a more ambitious wage floor. Both main parties are right to propose plans for an even higher wage floor, but should proceed carefully, and be prepared to change course if needed.

We head into the election with both main parties offering bold plans for the future of the minimum wage. The Conservatives want to increase it to a level that would ‘end low pay’, while Labour want to increase it to the level of the real living wage (the voluntary wage set on the basis of the cost of living).

This article compares the two parties’ policies. It shows that both plans are ambitions, with dividing lines in terms of how quickly the minimum is to be pushed upwards, and in the treatment of young workers. Taking a step back, we point out that political ambition brings both benefits and risks. The risks are familiar – go too far too fast and we might start to affect jobs. But the benefits are significant too. We estimate that the post-2016 increases in the adult rate have already added £3 billion to low earners’ pay packets. The task for the next Government is therefore to increase the minimum wage in such a way that builds on these benefits, while managing the risk.

How did we get here?

Compared with minimum wage policy from a decade ago, both main parties’ plans are radical. The minimum wage barely featured in the manifestos at the 2010 election; Labour said that the minimum wage would rise ‘at least’ in line with average earnings (something that had not happened in the three years post-recession, but which was normal in the years before), while the Conservatives committed only that they would ‘keep’ it. That this was even worth saying shows how far the debate has moved on.

The current era of political involvement in the minimum wage started in 2015 when then-Chancellor George Osborne announced a higher minimum wage for those aged 25 and above, the so-called ‘National Living Wage’ (NLW). The LPC was told to set the NLW on a path to hit 60 per cent of median pay for over 25s by October 2020. The introduction of the NLW broke the norm that rate setting was left to the Low Pay Commission. This was the first time the government set a target for the value of the minimum wage.

Having taken power from the LPC, neither government nor opposition parties have shown any interest in handing it back. Both parties head into the 2019 elections with bold promises.

Where are we going?

In 2024, if the current policy (of setting the NLW at 60 per cent of 25+ median hourly pay) was continued, the NLW would reach approximately £9.75, using the Office for Budget Responsibility (OBR) assumptions about future wage growth. How do the two parties’ plans compare?

The Conservatives have a clear policy in terms of the target for the bite of the NLW by 2024. They want to raise the main adult rate (the NLW) to a level that would ‘end low pay’; in line with international definitions of low pay. This means lifting the minimum wage to two-thirds of the hourly median. The Party doesn’t have a fixed cash figure for its value but, based on projections for what might happen to median wages, they have suggested it might reach £10.50 in 2024. We should note, however, that recent experience proves very clearly that these wage projections, and therefore NMW cash projections, can be wrong. Our own estimate is that the NLW would reach £10.60 under this policy, using OBR wage growth projections. This means the adult minimum wage would rise to 85p (9 per cent) higher than under current policy.

Figure 1: What are the two parties’ policies? 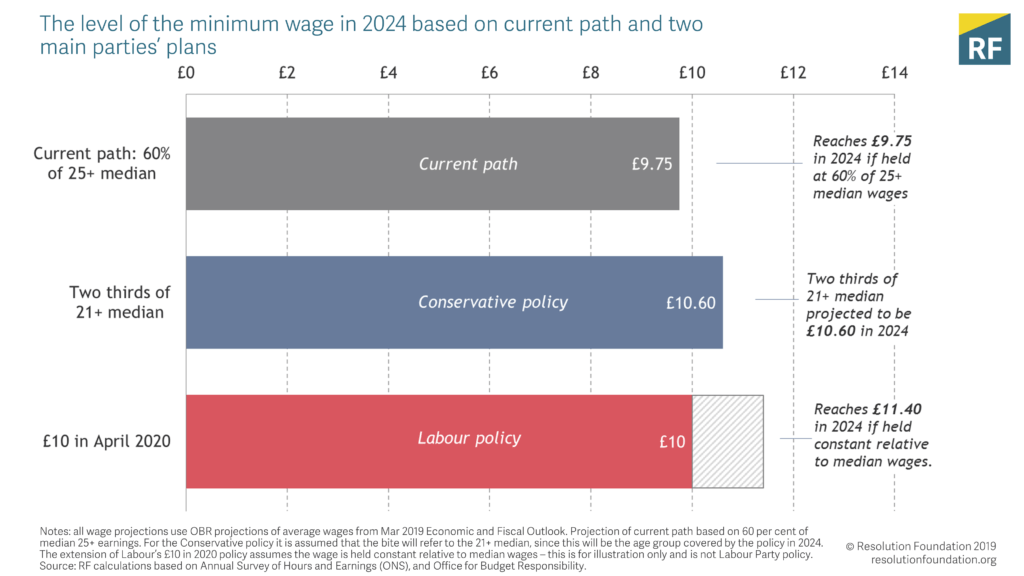 Labour, meanwhile, have a clear policy for the cash value in 2020 but no stated policy thereafter for uprating. This means we can’t say what cash value, or what percentage of the medium wage, their minimum wage will be in years to come. In order to generate a purely indicative comparison of what the minimum might be in future years under the two main parties Figure 1 below makes the assumption (again, not announced by Labour) that Labour would uprate its min wage in line with typical earnings. If that assumption were to be used then we get a projection of a minimum wage under Labour of £11.40 in 2024. That is £1.65 (17 per cent) higher than if we followed the current path, and 80p (9 per cent) higher than the Conservatives’ policy. But we wait to see what their approach to uprating will be. 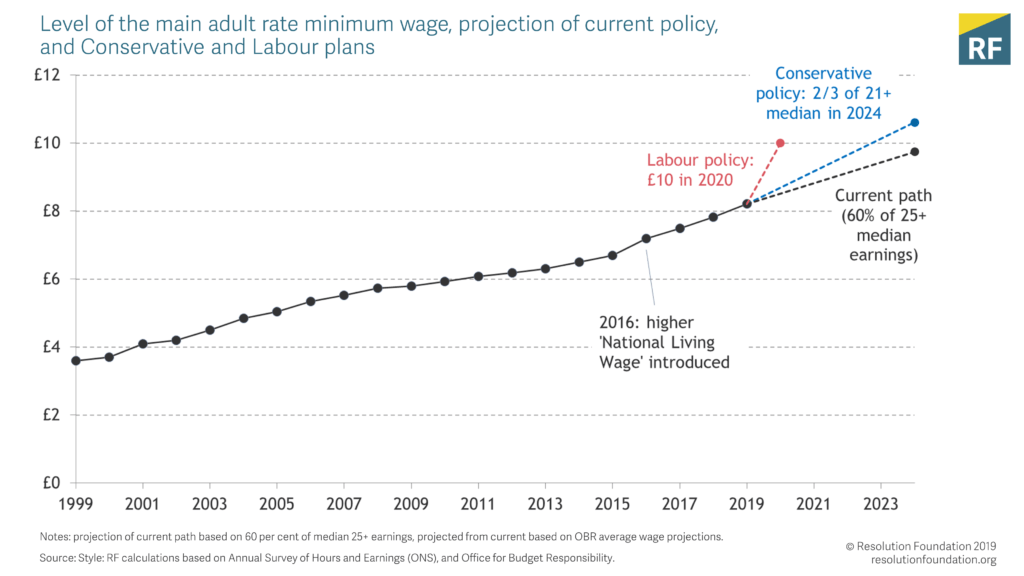 We can get a sense of the scale of the parties’ ambitions by placing them in an international context. As figure 3 (below) shows, before 2016 the UK was roughly in the middle of the pack when it comes to the bite of the minimum wage. The introduction of the NLW saw us move upwards, to level with Australia. Either party’s plan would put the minimum wage above that of most other developed economies. The Conservatives’ plan would put us in line with France and New Zealand by 2024. The Labour policy would move us above those countries, and by 2020.

Figure 3: Both parties’ plans take us to the top of the international league table 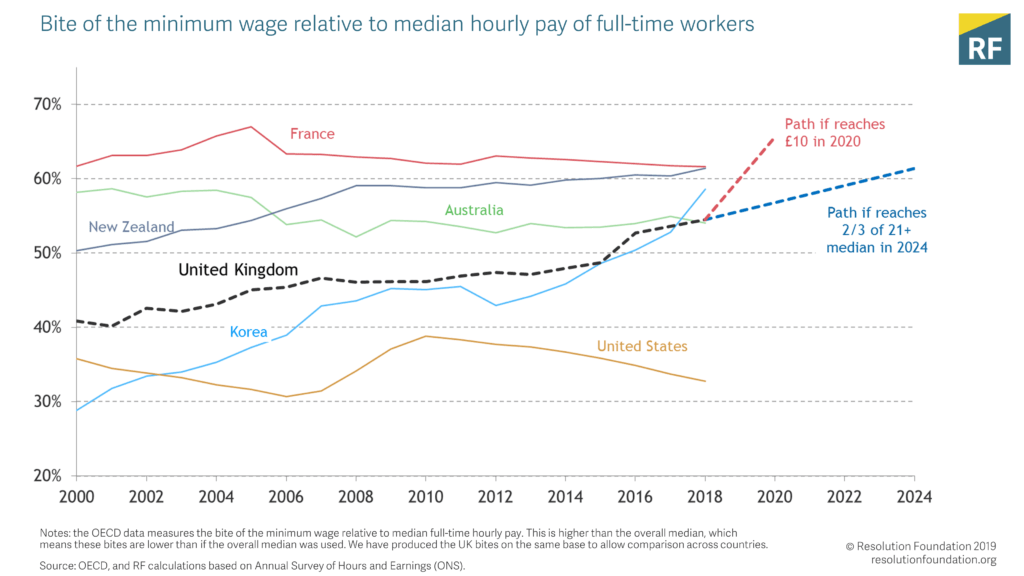 Beyond the differing ambitions for the adult rate, a bigger dividing line between the two main parties is in their approach to the youth rates. Whereas the Conservative policy is to extend the NLW to over-20s by 2024, the Labour policy is to get rid of all youth rates, and apply the same rate to all age groups.

There is certainly a case to be made for simplification. Currently there are four different minimum wage rates: the NLW, and three lower age related rates – shown in Figure 5 below. This grows to five if we include the apprentice rate. The picture is further complicated by the two voluntary real living wage rates, for London and the UK. Even more confusingly, thanks to George Osborne, these share a name with the ‘National Living Wage’, the main adult minimum wage rate. The LPC’s recent review of the youth rates found that employers favour simplification, perhaps because complexity increases the risk of accidental non-compliance.

But simplification means turning the minimum wage into a blunter tool. There is good reason to maintain some age differentiation. Young people’s wages are lower, reflecting their relative lack of experience. Applying a higher adult wage rate to all young workers might damage their employment prospects – especially if that adult rate is itself pushed upwards, as under both parties’ plans. 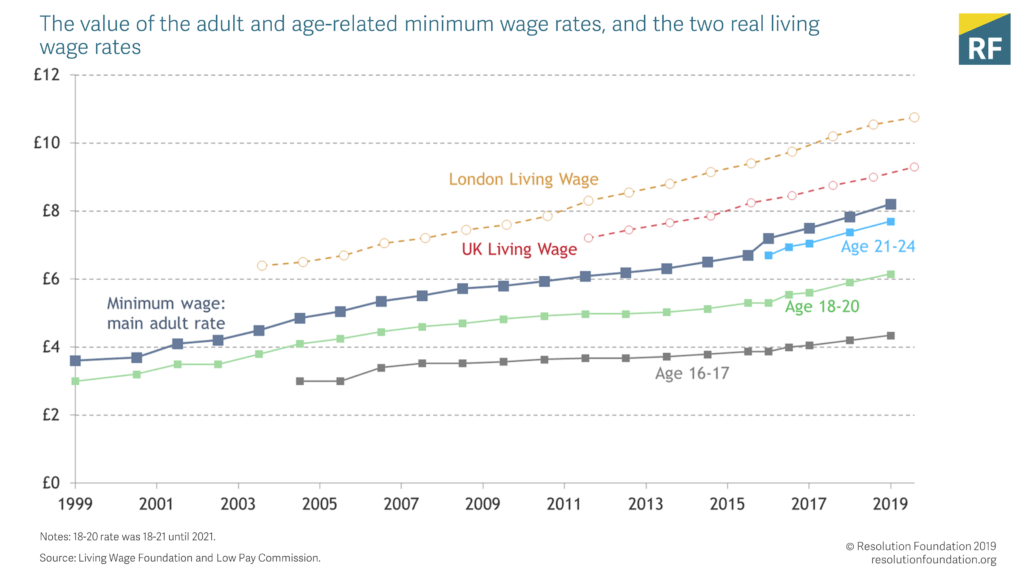 The risk of such an approach is illustrated in Figure 5 below, which shows the distribution of pay for the four age related minimum rates, with the three minimum wage policies (the current path, and the two main parties’ plans) overlaid. The current policy will by 2020 set a minimum that is at the 10th percentile of wages for each age group. The Conservatives’ policy would push that to roughly the 25th percentile for the two youngest age groups, and to just below median for the 21-24 group. The Labour policy, meanwhile, would set a rate that is above almost the whole distribution of pay for the two youngest age groups.

Figure 5: The parties have very different plans for younger workers 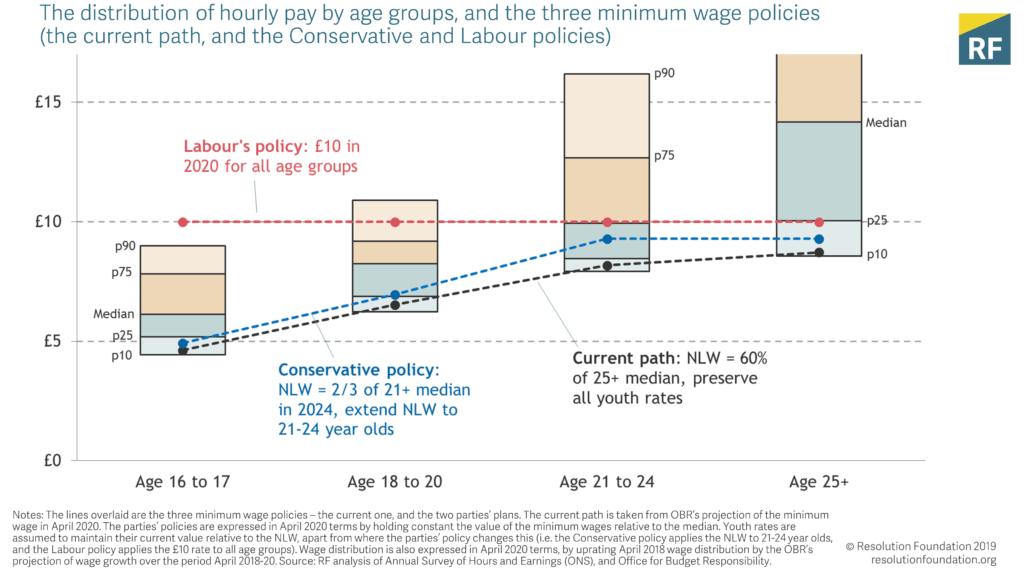 Ambition brings risks, but so does standing still

So – both parties are ambitious. As we (and many others) have pointed out – there are real risks to pushing up the minimum wage. Just because so far we have not found strong evidence of employment effects does not mean that will continue to be the case. Especially if we are also being ambitious when it comes to young workers. That suggests keeping all eyes trained on the evidence, and maintaining the LPC’s discretion to change the rates in response to that evidence or to changing economic conditions. It also means moving slowly enough that any overshoots can be corrected quickly.

What would the Conservatives ‘end low pay’ target in 2024 look like in terms of the pace of change? Interestingly, although it would take us to a more ambitious level, the pace of increase implied is lower than in the recent period. Between 2016 and 2019 (i.e. the NLW uprating period to date), the average annual increase in the minimum wage has been 6 per cent. By comparison, to reach two thirds of 21+ median pay in 2024 requires increasing the minimum at just over 5 per cent per year, starting next year (as shown in Figure 6 below). This is against a backdrop of roughly similar growth in median/average hourly pay in both periods (using the OBR’s assumption about future average wage growth). 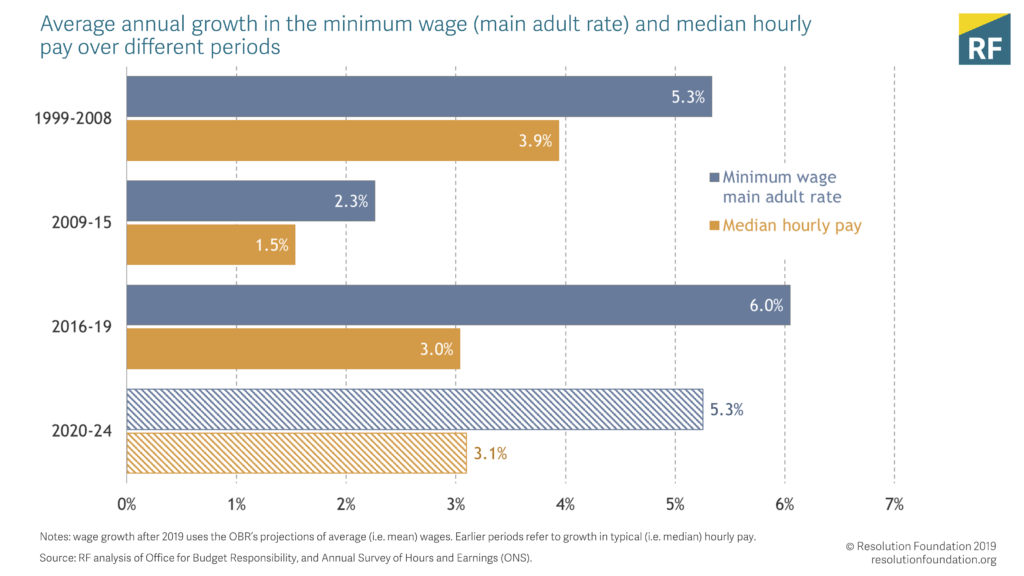 But if we are going to take seriously the risks of moving too far or too fast, we should also think about the risks of not moving fast or far enough. It seems now that we were too cautious in the pre-2016 era. Since 2016 the minimum wage has been increased aggressively without any negative effects on jobs or hours – or at least, none that we have found yet. And the gain to low earners is significant. We estimate that, in 2018, only three years into the 5 year NLW uprating period, an additional £3 billion (in 2018 prices) was added to the pay packets of low earning 25+ year olds, compared to the counterfactual of holding the minimum wage at its 2015 bite (as shown in Figure 7).

This result comes from imposing the 2015 distribution on the 2018 median, and comparing the sum of hourly pay and hours worked up to the 25th percentile in both cases. The figure might be open to question on the grounds that it assumes the minimum wage has significant spillover effects beyond those affected directly. However, this is the assumption used in the OBR’s modelling of the minimum wage, consistent with the findings in an important paper on minimum wage spillovers from 2012 (Butcher, Dickens and Manning).

Figure 7: The National Living Wage has pushed up the pay distribution 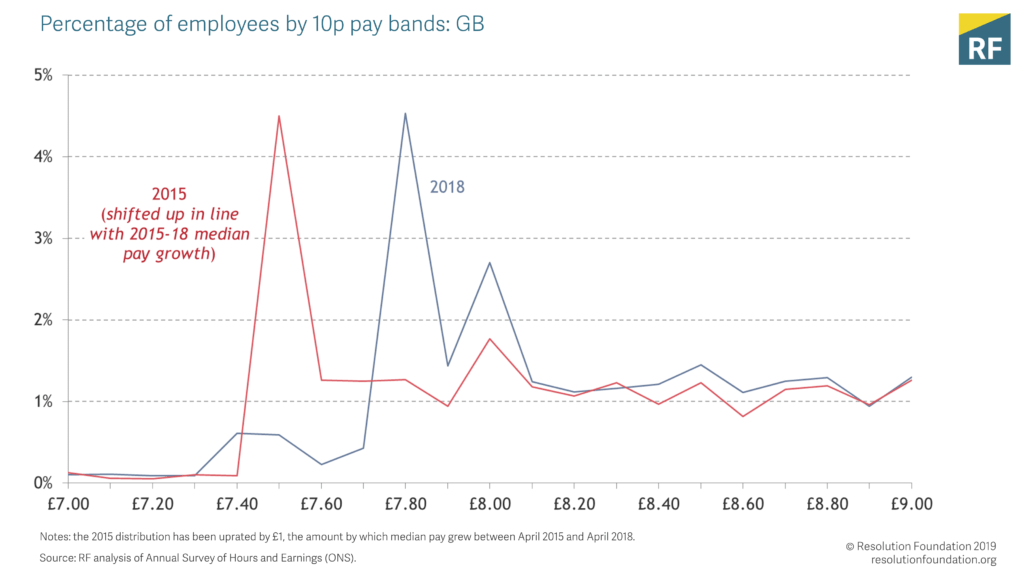 A second criticism might be that it attributes to the minimum wage pay growth which has resulted from the UK’s tightening labour market post 2015. However, because our 2015 distribution is shifted up to match the 2018 median, this would only be a problem if the tight labour market had caused lower-end wages to grow faster than median wages. There is no obvious reason why that would be the case, especially given the increase in labour supply among lower income households, which if anything should have placed downwards pressure on the wages of low earners. In any case, any such effect is surely dwarfed by the effect of the minimum wage.