As England enters its second lockdown the outlook for the labour market is as uncertain as at any point during the crisis (Wales and Northern Ireland are already in a second period of lockdown or tough restrictions, and restrictions in Scotland were increased a week ago). The story of recent weeks has been an accelerating second wave of the virus, followed in turn by a ratcheting up of social distancing measures in response, and followed still further behind by a ramping back up of economic support measures. With England back in full lockdown, and with the Job Retention Scheme fully reinstated (albeit in its August guise – employers must pay National Insurance and pension contributions), it’s back to life as we remember it from the Spring.

What does this mean for the labour market? The first lockdown saw a jobs shake out (700,000 jobs were lost by June) followed by a muted recovery and a period of both low hiring and low job exits. We might see something similar this time round.

The optimistic view is that the Government’s policy changes – to reduce employer contributions in the Job Support Scheme, and then most recently to return to the full Job Retention Scheme – will have the desired effect of protecting jobs. The problem is those policy changes have come late in the day. Redundancies were already rising over the summer and employers announced plans for many more. They would have had in mind the Government’s policy stance at that point, that ‘non-viable’ jobs would stop receiving protection over winter. Therefore, even with the Job Retention Scheme back in place we may continue to see redundancies and job losses in October and November. We will get some data for October (employee jobs and vacancies) in ONS’s labour market statistics published next week.

To distract from lockdown woes, the Spotlight in this Earnings Outlook focuses on something completely different, and positive. This week is Living Wage Week, when the new (real) Living Wage rates for London and the Rest of UK are announced. We show that the campaign is having a significant impact on the UK’s low paid, boosting the pay of around 200,000 workers.

In our Lifting the Lid section we look at hourly and weekly pay growth in the recently published ASHE data for April 2020, measures of job mobility, and the impact of the crisis on London.

Next week is Living Wage Week, where the new Real Living Wage (RLW) rates for 2020-21 will be announced. To mark this, we look at the impact of the RLW on pay in the UK.

The RLW is the voluntary wage rate set by the Living Wage Foundation, calculated to ensure that recipients can afford a decent standard of living.[1] This is not to be confused with the so-called ‘National Living Wage’, the minimum wage rate applicable to those age 25 and above brought in by then-Chancellor George Osborne in 2016. The mixed terminology is not helpful, but the adoption of the language is arguably testament to the success of the Living Wage Foundation’s (LWF) campaigning.

But apart from changing how we talk about low pay, what about evidence of its impact on workers’ pay packets? The LWF collect their own data on workers paid at the RLW from employers signed up to the campaign. They estimate that in April 2019 there were 167,000 workers who were paid the RLW by accredited employers, and who would otherwise have been paid less than the RLW (this is their latest firm estimate – they think the number has since risen to over 200,000). Their data also shows the rapid growth of their campaign, with just 5,000 workers paid the RLW by accredited employers in 2012.

We can assess LWF’s own estimates with data from the ONS’s Annual Survey of Hours and Earnings. In 2019, there were 480,000 employees paid at the UK RLW rate of £9 and 18,000 paid at the London rate of £10.55.[2] Of course, we can’t attribute all those to the Living Wage campaign – some would have been paid at that level regardless of the campaign. That’s especially true for the current UK rate, since wages tend to cluster at round numbers. But we can account for this, crudely, by subtracting the number of people paid at that cash level the previous year, when that cash value was not a real living wage, and at which point the value of the RLW that would be set the following year was not known. This exercise produces a number that is likely closer to the additional number of employees paid at the level of the RLW as a result of the Living Wage campaign. These estimates are shown in Figure 1 below, alongside the LWF’s internal estimates. Our estimate is that in 2019 there were 190,000 more workers being paid the RLW than we would have otherwise expected, suggesting the impact of the living wage campaign. This is slightly higher than the LWF’s estimate of 167,000 which may in part be due to our numbers capturing non-accredited employers who choose to shadow the Living Wage rates. As is clear in the Figure, the two series are extremely close, suggesting we can have confidence that the Living Wage campaign is indeed having a significant and growing direct impact on wages.

Figure 1: Estimates of the number of employees paid at the real Living Wage as a result of the Living Wage campaign: UK/GB 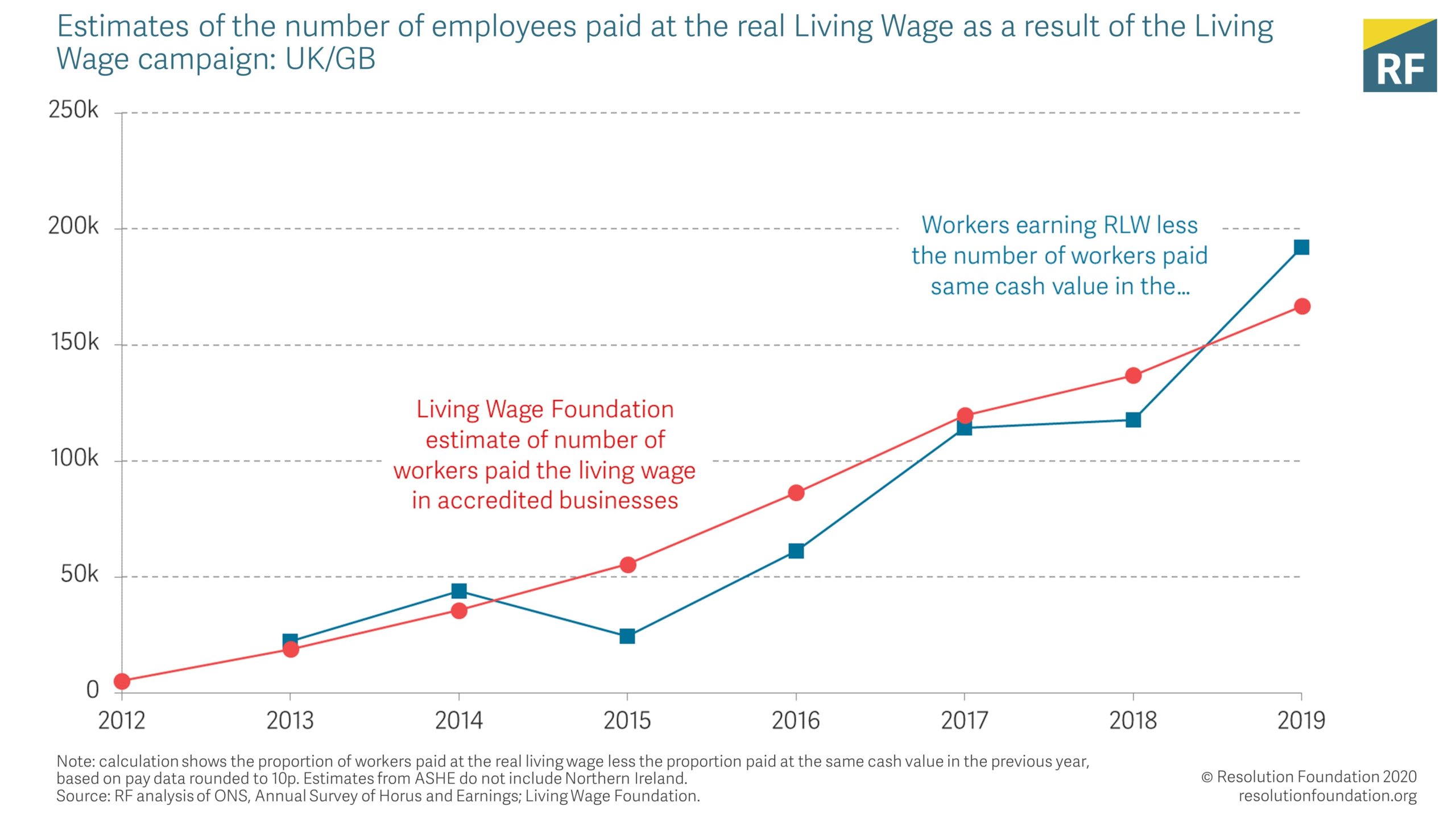 We also use this method (looking at the number of workers paid the RLW compared to the number paid the same cash value the previous year) to dig a bit deeper.  Figure 2 shows the proportion of employees paid at the RLW in a given year, less the proportion paid at the same cash value the previous year, for each region/nation from 2017 to 2019. As with the overall figure, the impact looks to have been growing over time in most regions and nations. It also suggests that the campaign has had a bigger impact (proportionally speaking) in some parts of the country than others. The proportion of workers paid the RLW (over and above the share we would otherwise expect) in 2019 was just over 1 per cent of all workers, compared to less than 0.5 per cent in London.

Figure 2: Estimates of the proportion of employees paid at the real living wage as a result of the living wage campaign by region/nation: GB 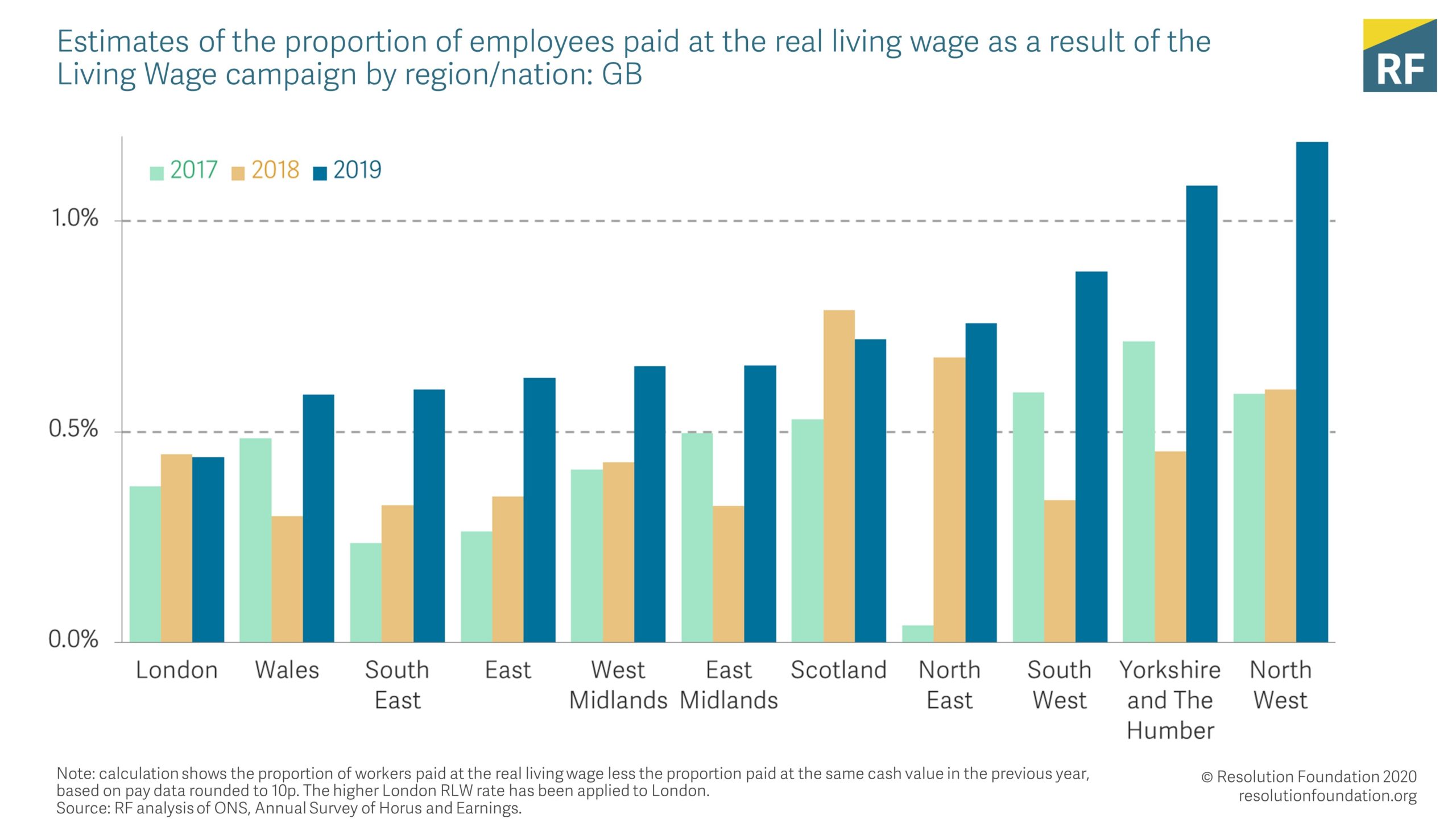 In addition to the method above we have undertaken statistical tests to confirm that the ‘spikes’ in the wage distribution seen at the real living wage are statistically significant rather than ‘noise’ in the data, although the corroboration with the LWF’s estimates already makes that case pretty compellingly.[3] We find that spikes in the distribution at the RLW are indeed statistically significant (that is, you wouldn’t expect to observe such spikes if the distribution was random). This is true both comparing the spike compared to its immediate neighbouring areas (plus or minus 1, 2 or 5 pence) but also when comparing to spikes at other round numbers (the real living wage is always calculated to the nearest 5p, so carries an inherent roundness). Figure 3, below, shows the spikes in the hourly wage distribution in London at the levels of the London Living Wage in the last three years. Most of the other spikes in the data can be attributed to clustering at round numbers, such as £9 and £10. 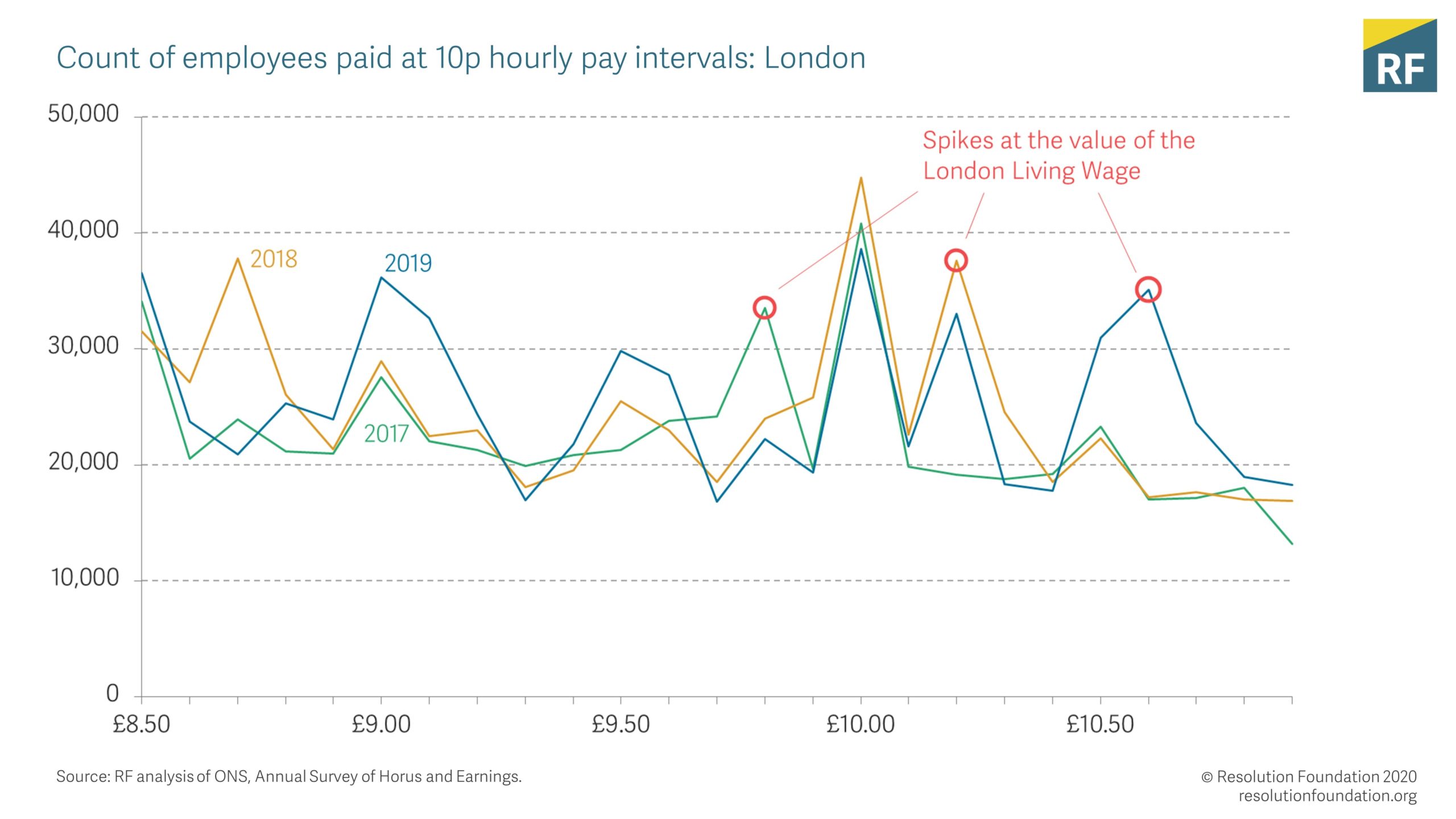 The above estimates of take up from ASHE are likely to be underestimates of the number of workers whose pay is affected by the Living Wage campaign, for two reasons. First, ASHE data is usually collected in mid-April, but the deadline for accredited employers to implement the new Living Wage rates is six months after the announcement of the new rates. For example, the 2018-19 rates were announced on November 5 2018, meaning accredited employers had until early May 2019 to implement the 2018-19 rates. LWF believe around 90 per cent of employers will have uprated by April, but that still leaves 10 per cent of late-implementers who we may be missing with the above estimates. In fact, there are some signs  of Living Wage uprating after the ASHE data collection in Figure 3 above – there is a small spike in the April 2019 data at the previous year’s London Living Wage rate of £10.20.

The second reason is that the above estimates capture the direct impact of the living wage: workers paid at (approximately) the level of the Living Wage. This does not account for ‘spillover effects’ – which is when an increase in pay for the lowest earners also affects the pay of higher earners if employers preserve pay differentials between jobs. We know, for example, that the minimum wage (i.e. the legal wage floor) has spillover effects up to the 30th percentile of the hourly pay distribution (that was £10.15 in April 2019, around £2 above then adult minimum wage of £8.21).

Looking beyond the hourly wage rate, important as that is, the Living Wage Foundation have recently set their sights on the related problem of insecurity, asking employers to sign up to a ‘living hours’ campaign. This means offering workers a minimum 16 hours of work a week (if they want it), proper advance notice of shifts, and giving workers a contract that reflects their hours worked. The Low Pay Commission (and we at RF) have recommended that Government add new legal protections along similar lines. Let’s hope that, just as they did with the issue of low pay, the LWF’s campaign on hours builds a similar consensus on insecurity – with employers that can act now leading the way.