The coronavirus crisis has hit workers hard: the numbers of those furloughed and those newly claiming Universal Credit illustrates the scale. To date, however, we have had very limited information about which types of people have been most affected. In this spotlight, we begin to fill this gap with flash findings from the Resolution Foundation’s new coronavirus survey.

To begin, we find that nearly one-third of lower-paid employees have lost jobs or been furloughed, compared to less than one-in-ten top earners, with these experiences also more common among atypical employees. The Coronavirus Job Retention Scheme has been well-received by workers, with more than half of those furloughed happy about that outcome, perhaps in part because a fifth of them expect to remain on their full pay. The Government’s scheme for the self-employed is less well-understood, with three-in-ten workers that did some self-employed work prior to coronavirus believing they are ineligible for support.

Turning to the future, over half of the group most likely to be working from home at present – higher earners – expect to work from home more after coronavirus than they did before. But more importantly, one-in-eight of those who are currently working thinks it likely that they will lose their job over the next three months.  The stakes are high for many in today’s new world of work.

In this spotlight, we present the first results from our new survey of working-age adults in the UK, which captures wide-ranging evidence on the effects that the coronavirus crisis has had on jobs, benefits, incomes, living situations and future expectations. Here, we focus on the labour market experience, and in particular how this differs across the earnings distribution. In future spotlights we will examine other areas such as labour market experience by age.[1]

The survey was designed and commissioned by the Resolution Foundation, in partnership with the Health Foundation (although the views in this note are not necessarily those of the Heath Foundation). It was conducted using an online interview administered to members of the YouGov Plc UK panel, which is made up of 800,000+ individuals who have agreed to take part in surveys. The total sample size was 6,005 adults, aged 18-65 and fieldwork was undertaken during 6-11 May 2020. Figures presented here have been weighted and are representative of all GB adults (aged 18+) according to age, gender, and region.[2]

Furloughing, and job and hours losses, are much more common experiences for lower-earning employees

We first focus on the extent to which people who were in employee jobs before the coronavirus crisis have experienced changes associated with reductions in earnings and/or the amount of work being done.

Figure 1 shows a clear gradient in jobs and hours losses, and furloughing, across the earnings distribution. Close to one-third (30 per cent) of the lowest-earning fifth of employees have been furloughed or lost their job, compared to less than one-in-ten (8 per cent) of the top fifth of employee earners pre-coronavirus. In contrast, the distribution of coronavirus-related hours losses (that are associated with pay reductions) by prior earnings level is much less stark.[3]

Figure 1: One-third of the lowest-paid fifth of employees have been furloughed, or lost jobs or hours 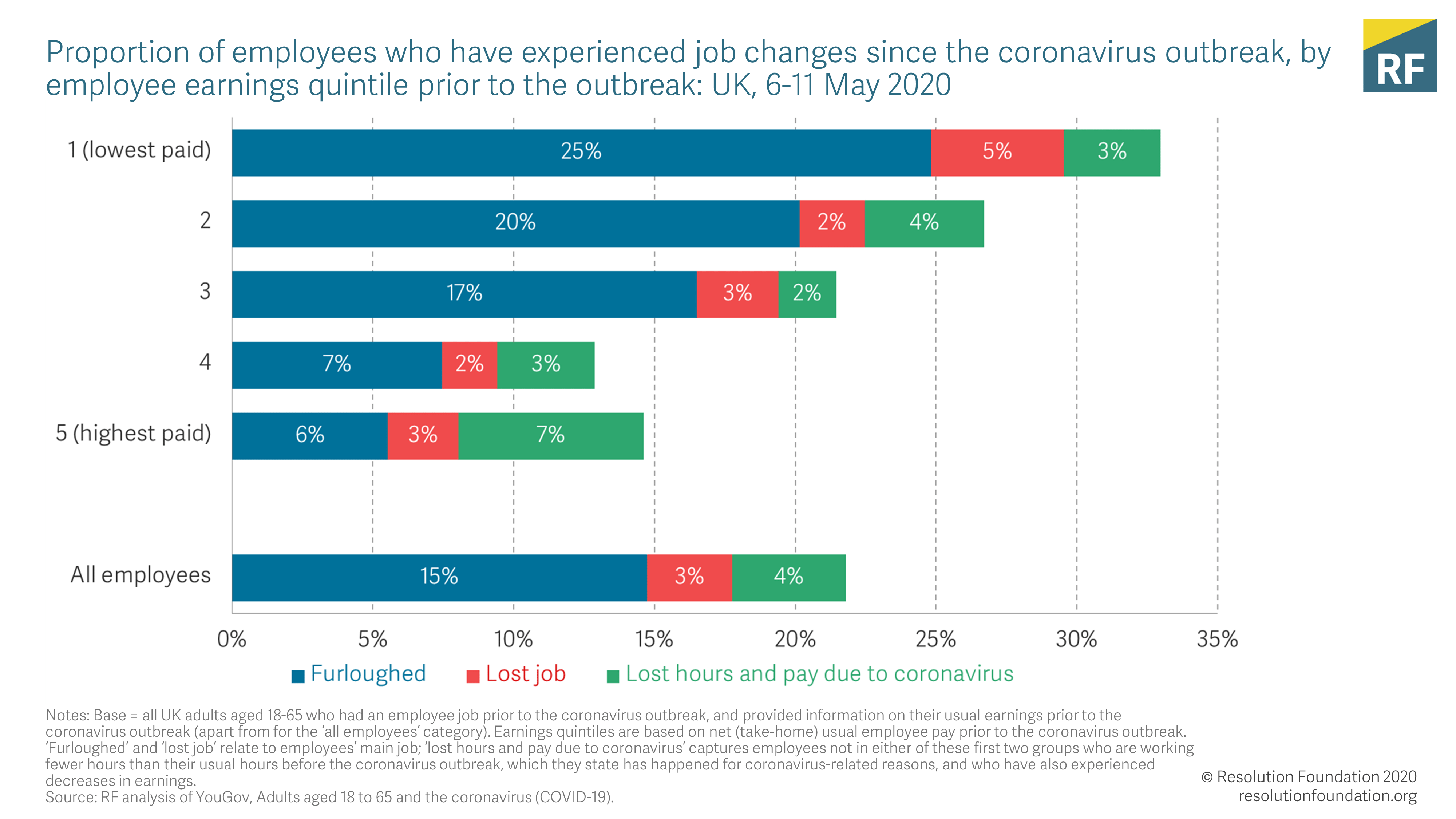 In numerical terms, our survey suggests around 4.1 million of the UK’s 27.9 million employees (in December-February 2020) have been placed on furlough, somewhat lower than the 6.3-7.5 million jobs that firms have claimed JRS support for from HM Revenue & Customs up to this point. This discrepancy is likely to be explained by a range of factors: the fact that people can have more than one job (an issue we return to below) for example; that some workers that were furloughed have since been brought back into the workplace; and that some survey respondents perhaps were unfamiliar with the term ‘furlough’, leading to a degree of under-recording.  Likewise, the 4 per cent of workers that have lost their jobs is equivalent to 1.4 million workers – a figure which is consistent with early data on inflows to Universal Credit[4], and in the same ballpark as, although lower than, forecasts for unemployment increases in the second quarter of 2020.[5] Overall, it seems reasonable to suggest that the estimates of furloughing and job loss provided by our survey may be at the conservative end of the spectrum.

Figure 2: Employees in atypical work are more likely to have been furloughed, or lost jobs or hours 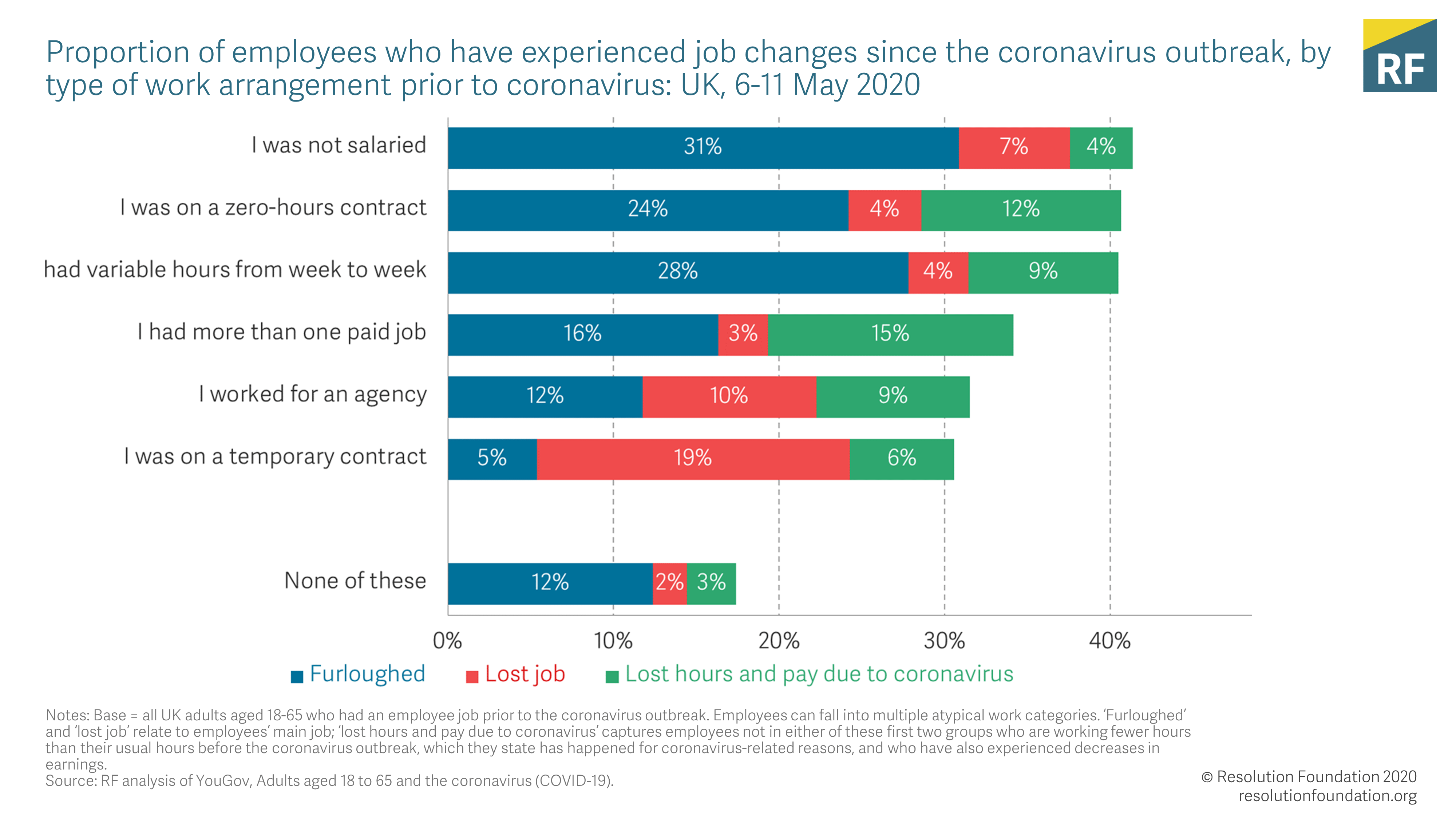 Figure 2 explores the same experiences for employees in different types of atypical work prior to coronavirus. As this makes clear, across the board employees in these types of jobs are more likely to have experienced job or hours losses, or to have been furloughed than those in more typical forms of work. For example, 31 per cent of employees with variable hours, and 28 per cent of employees on zero-hours contracts, have either lost their main job or been furloughed from it. At the extreme, almost one-fifth (19 per cent) of those previously on temporary contracts have lost their main job. These findings are consistent with previous analysis of atypical workers in the current crisis.

Finally, Figure 3 explores labour market experiences across a range of demographic characteristics. In general, there is much less variation than in the above two charts. White employees surveyed appear slightly more likely to have been furloughed than those from BAME groups surveyed, and job loss appears somewhat more common for non-parents (likely to be partly related to age, an issue we will return to in future analysis).

Figure 3: There is less variation in experience of furloughing, or job or hours loss, by demographic characteristics 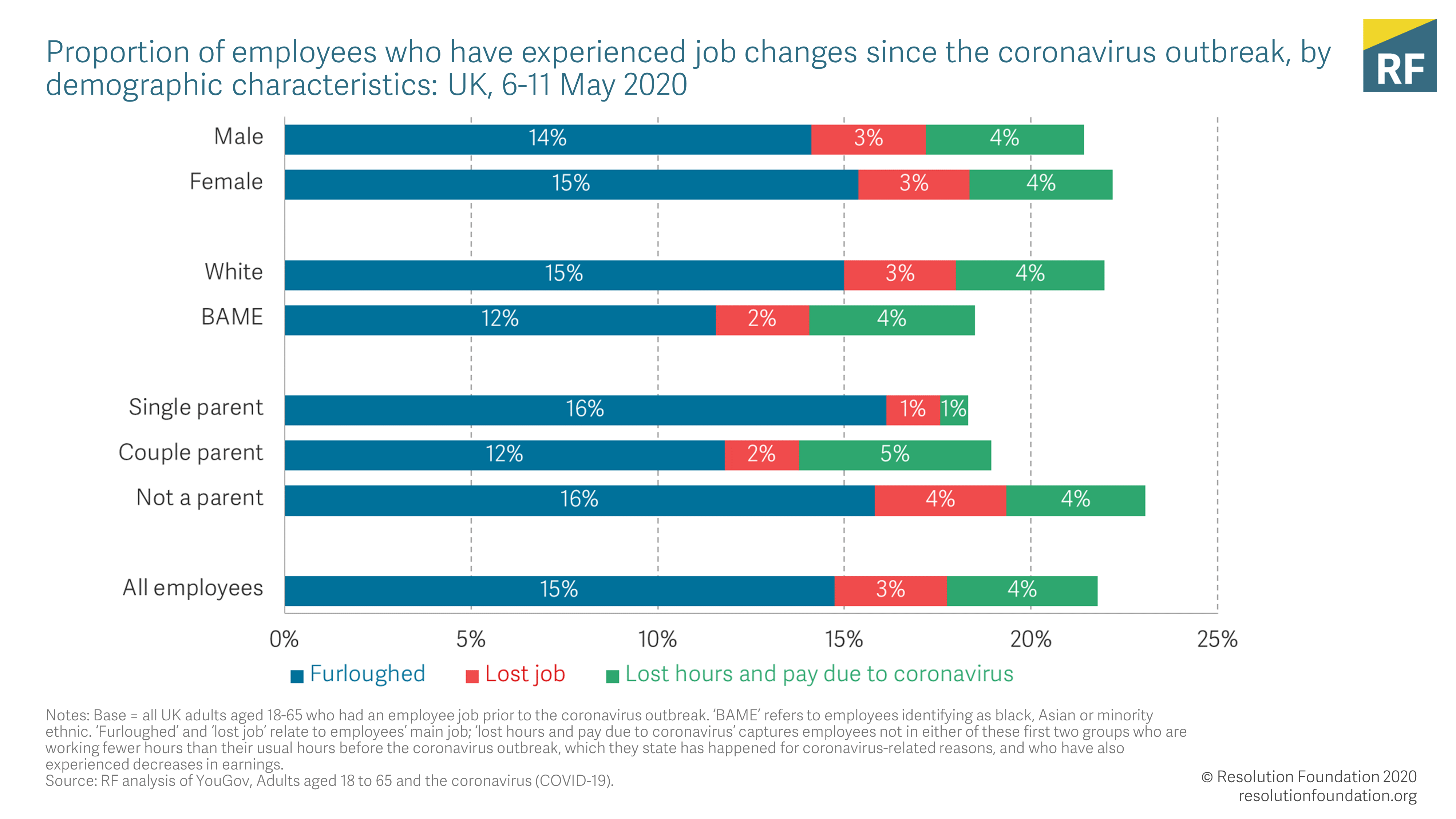 The employee furlough scheme has been well-received, but the self-employed support scheme has yet to take off

Government support schemes such as the JRS have been essential to preserving both living standards and employees’ attachment to their employers during the coronavirus crisis.

The left panel of Figure 4 shows that most employees who have been furloughed by their employer are receiving either 80 per cent of their previous pay, or the £2,500 cap for higher earners. However, one-fifth of workers (20 per cent) are receiving full pay, with their employer topping up the earnings that the JRS does not cover. Meanwhile, more than half are happy about being furloughed (54 per cent), rising to seven-in-ten among the lowest paid.

The vast majority of furloughing choices were made by the employer, with only 7 per cent having volunteered to suspend their work. Worryingly, a minority of furloughed employees (also 7 per cent) say they have been asked or expected to do work while on furlough.

Figure 4: Although only a minority of workers are receiving full pay while on furlough, more than half are happy about having been furloughed 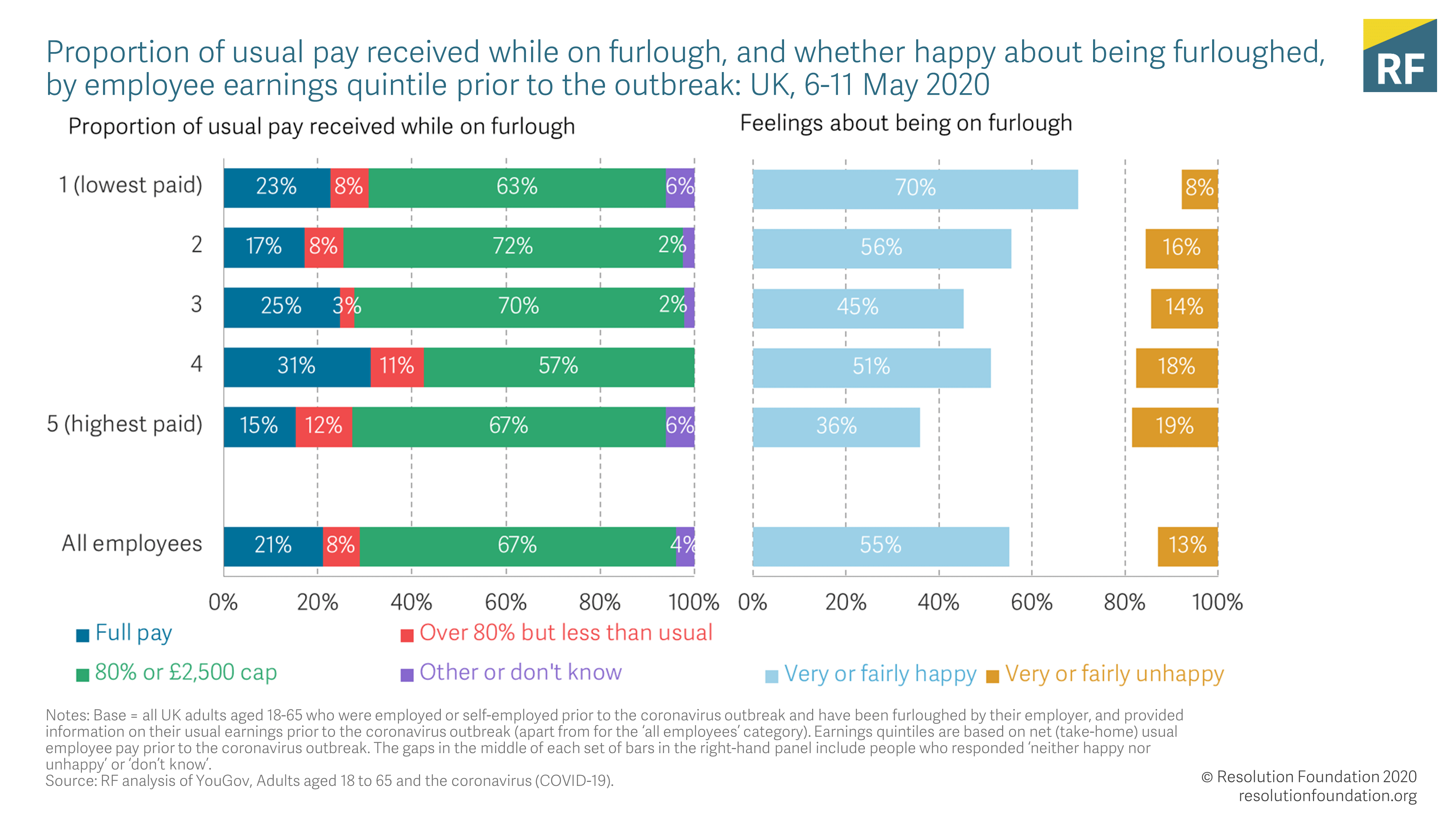 Turning to support for the self-employed, Figure 5 shows that just 39 per cent of people doing some self-employed work prior to the coronavirus crisis intend to or have applied for the Self-Employed Income Support Scheme (SEISS) (which was not yet up and running when the survey was conducted). Given initial costings for the scheme, this is lower than the Government expects. For many higher earners, this is because their profits have not been hit by the coronavirus crisis (almost a quarter of the top quintile), or because they believe they are ineligible due to their pre-crisis profit levels being too high, or being incorporated (three-in-ten). In contrast, lower earners are more likely to believe they are ineligible because they have not completed the required tax returns.

Figure 5: Less than two-fifths of self-employed people are have applied or are planning to apply for government support 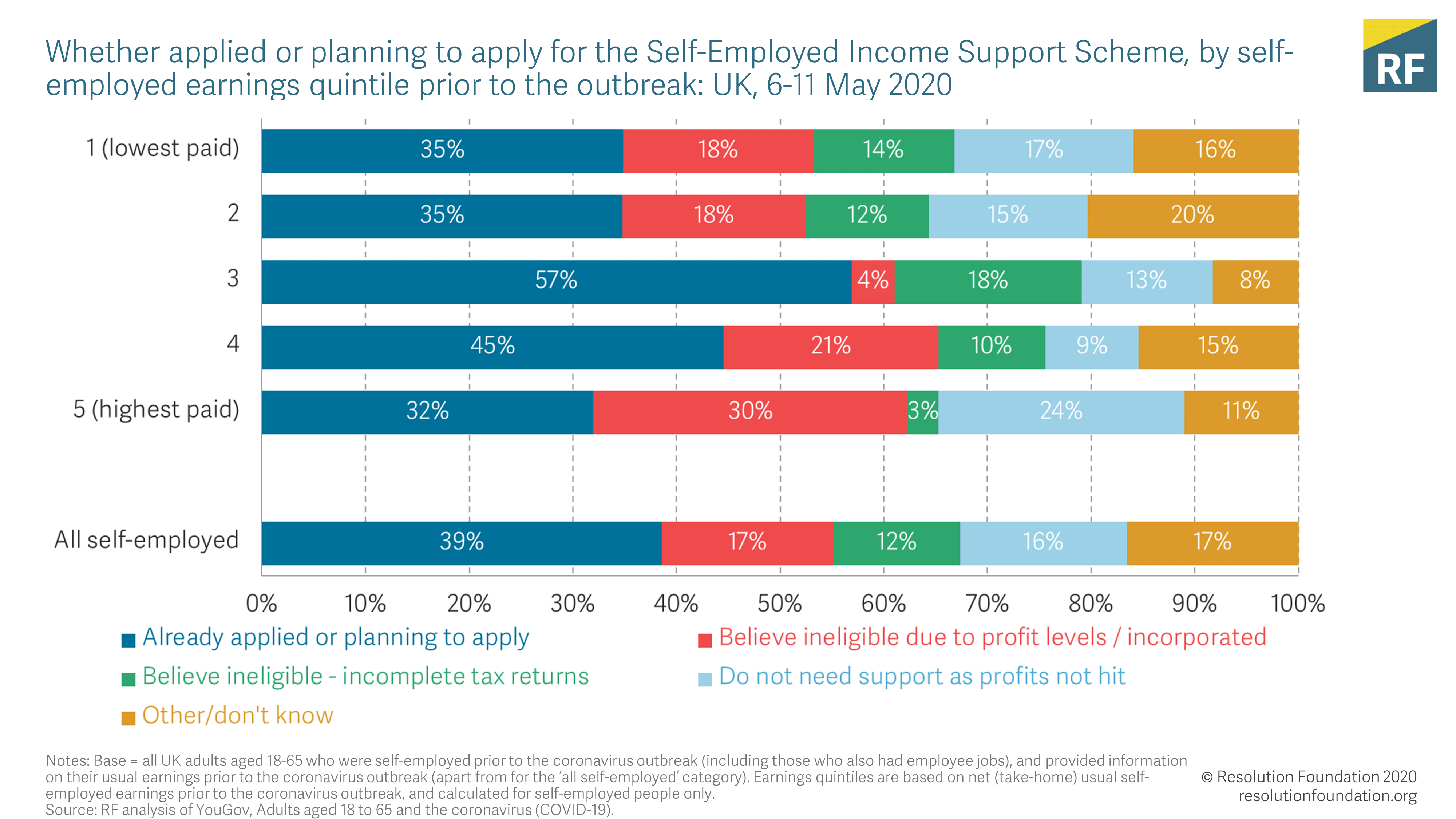 Looking to the future, higher earners expect to increase remote working, but more broadly workers are concerned about losing jobs and hours

The survey results extend our previous analysis, and other survey evidence, showing that higher earners are most likely to be able to work from home. Over four-in-five workers in the top earnings quintile are currently working from home some or all of the time, compared to less than half in the bottom quintile, as Figure 6 shows.

Coronavirus is clearly changing the way we all work, but it is higher earners who are more likely to think the pandemic will change their working life for good, with over half of top earners saying they expect to work from home more after the outbreak.

Figure 6: Over half of the highest earners able to work from home expect to work remotely more often in the future 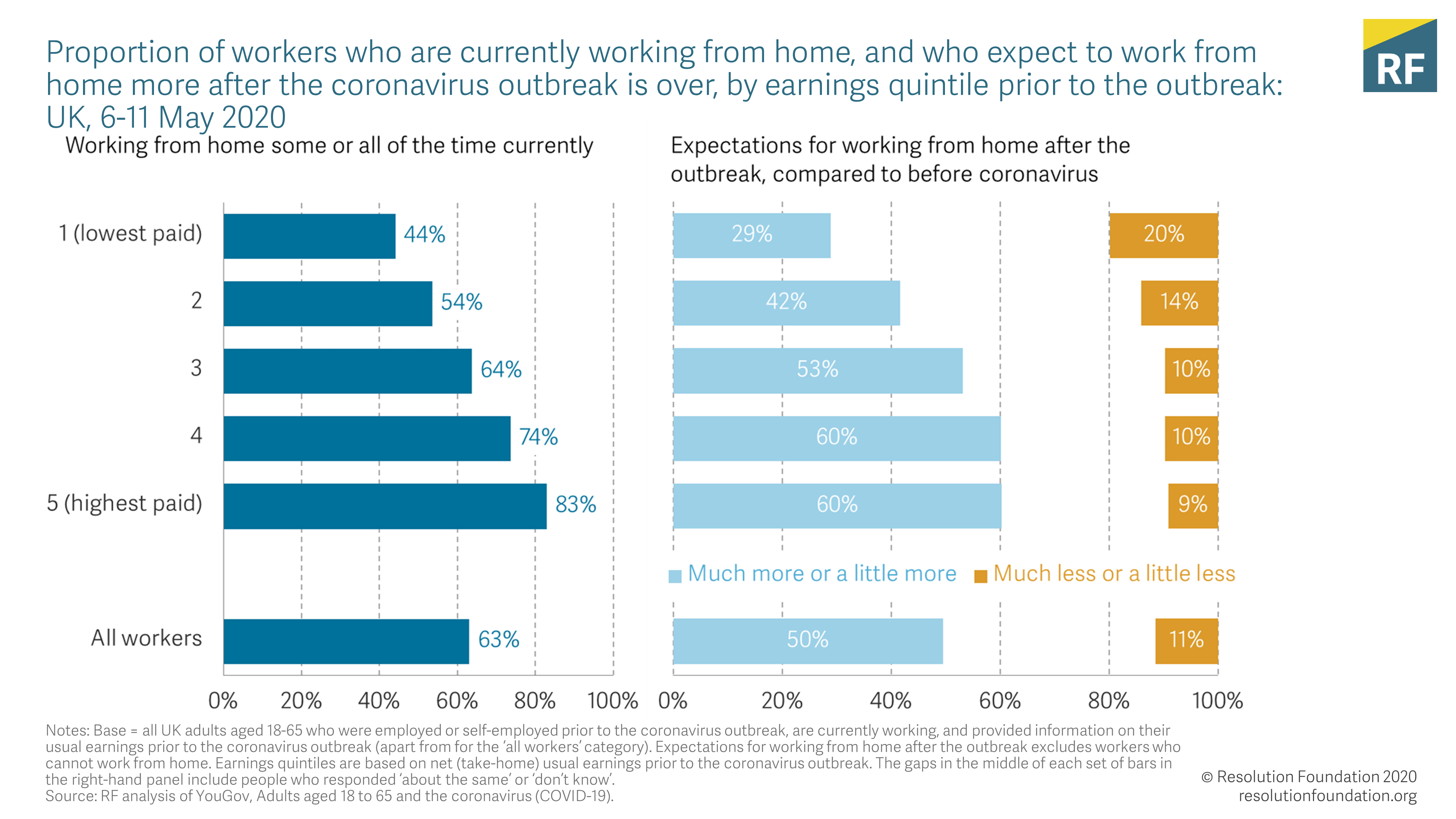 But there are other much more important changes that could be afoot, with a share of workers concerned about whether they will have (much) work at all in the near future. Figure 7 set out workers’ near-term expectations, and shows that one-in-eight workers (13 per cent) think that it is likely they will lose their job in the next three months; more than one-in-seven (15 per cent) believe they will be furloughed; and nearly a quarter (23 per cent) think that their hours will be reduced.

Figure 7: One-in-eight workers worry that they will lose their job in the next three months 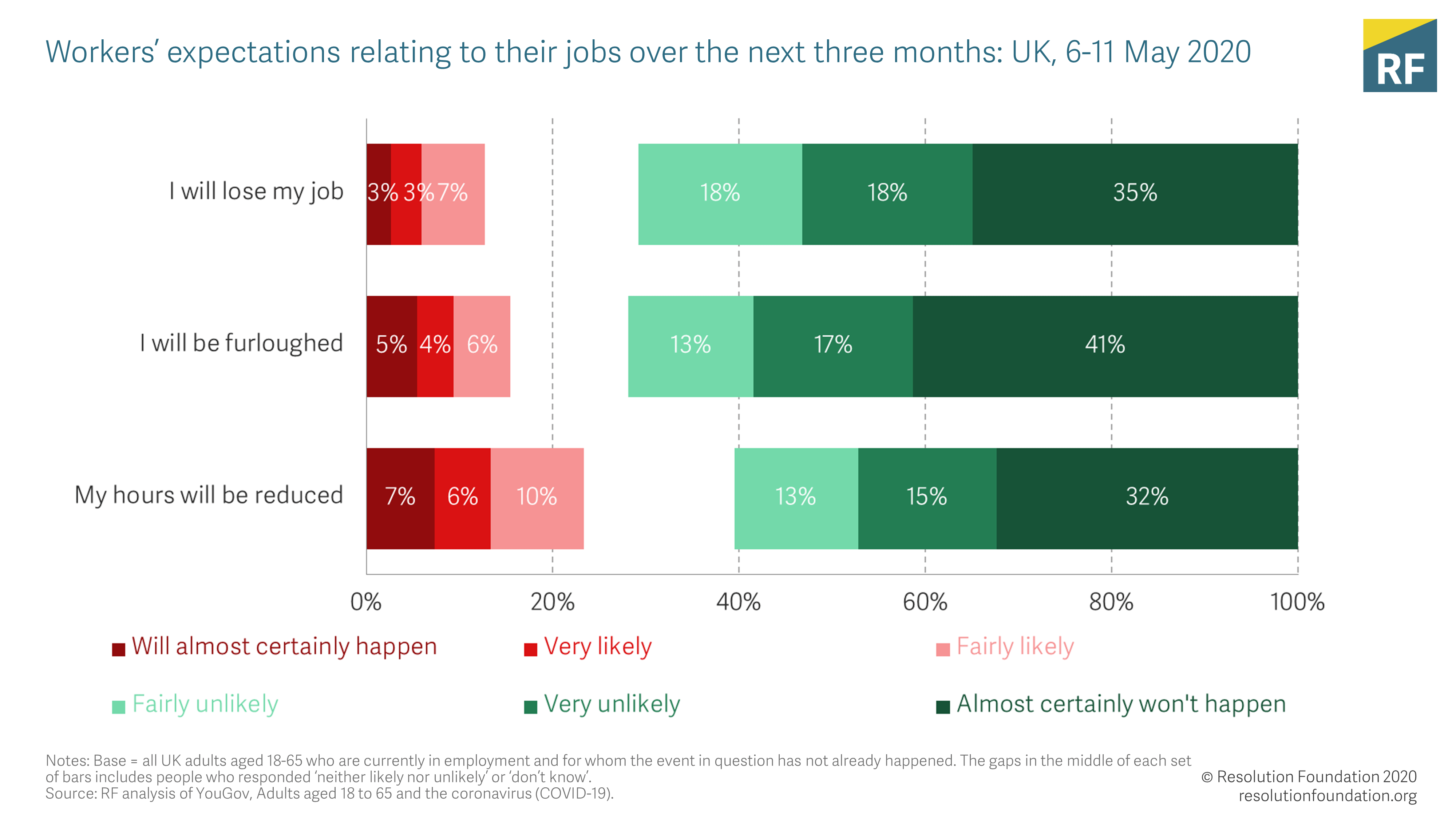 Our findings show the disproportionate impact the coronavirus crisis is having on the lowest earners, as well as those in atypical forms of work. These workers are more likely to have lost work or been furloughed due to the crisis. And while government support, such as the Coronavirus Job Retention Scheme and (in coming weeks) the Self-Employed Income Support Scheme, will play a vital role in helping workers get through the crisis, there is significant anxiety about the near future. As the crisis continues to unfold, a comprehensive support package will be essential to minimise the long-term effects on the labour market.

[1] Other recent studies that have examined the experience of different worker groups include work by Abi Adams-Prassl and colleagues, and data from the Office for National Statistics.

[2] The figures relating to pay, hours and proportion of those furloughed or have lost their jobs are not reflective of YouGov statistics and have been analysed independently by the Resolution Foundation.

[3] In other words, we exclude those who are working fewer hours than they were before the coronavirus outbreak started in the UK, for coronavirus-related reasons, but have not experienced a reduction in pay (for example, because they are salaried and remain on the same salary).

[4] 1.6 million households (2 million individuals) commenced Universal Credit claims between the start of lockdown and 5 May 2020, some of which will have been triggered by lost hours/earnings, rather than job loss.

[5] For example, the Bank of England’s coronavirus scenario has the unemployment rate picking up to 9 per cent in the second quarter of 2020, equivalent to an increase of around 1.8 million.