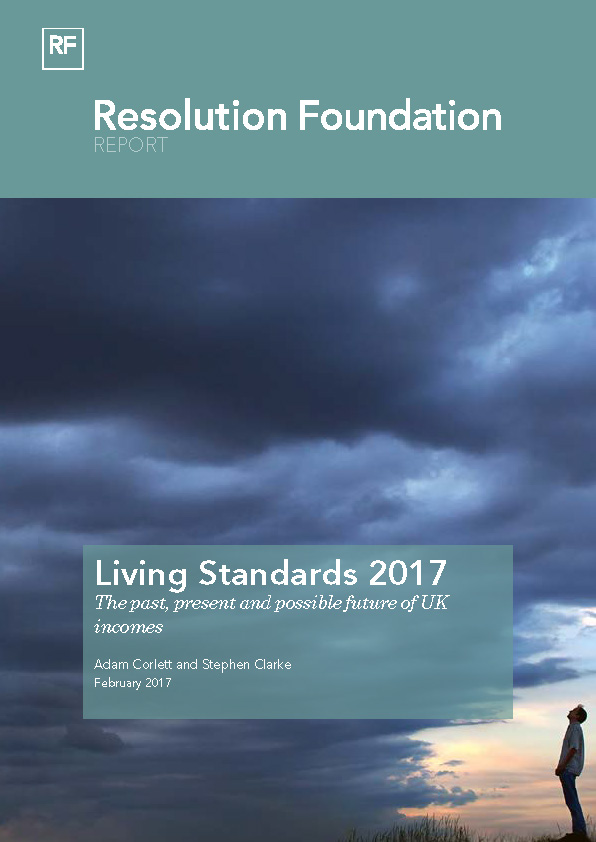 This is the Resolution Foundation’s eighth annual state of the nation report on UK living standards. It comes at a time when the recovery from the last downturn is still incomplete for some, yet the threat of a new squeeze on living standards looms large.

The financial crisis hit households hard, yet in the last couple of years the country has experienced something of a ‘mini-boom’ in living standards. Household income growth has been strong in the past few years, driven by large falls in inflation and large increases in employment. In 2014-15, we know that median real household disposable income – the best measure of living standards and the focus of this report – grew by 3.4 per cent: the fastest increase since the early 2000s.

Unfortunately this may be as good as it gets. We estimate that income growth has slowed substantially in 2016-17, with typical income just 1.2 per cent higher than the year before. Rising inflation and slowing employment growth is already leading to slower household income growth.

The same factors that are currently dragging on the growth in living standards are likely to intensify. We project that income growth will slow to 0.3 per cent a year for the typical working age household over the next four years, once we account for housing costs. This overall weak growth also hides a division between growth for some and falling living standards for others. Our projections suggest that incomes will rise slowly for high income households, stagnate in the middle and fall at the bottom. Very significant cuts to working-age welfare of over £12 billion are a key component of what looks set to be falling living standards for almost the entire bottom half of the working-age income distribution between this year and 2020-21. The result is the biggest rise in inequality since the late 1980s.

In some respects this is the result of wider economic forces – rising inflation in particular. Yet in other respects policy change could mean that what we predict does not come to pass. The government has an opportunity to revisit regressive tax and spending plans inherited from the previous administration, it can help support even more people into work, and begin to address the country’s chronic productivity problem. These things, alongside the handling of Brexit negotiations, should be government’s focus for the rest of this parliament.