The Bank of England has raised rates by 75 basis points today – the eighth successive increase and the largest since 1989 – to 3 per cent, the highest since November 2008. Despite this historic rise, the big news was that the Bank signalled very clearly that market expectations for further rate rises had gone too far, amidst a bleak outlook for the UK economy. While this is good news for around 1.2 million households on variable-rate mortgages, it is still likely that, by the end of 2024, 5.1 million households will see their mortgage costs increase substantially, with an average annual increase in the region of £3,900 relative to Autumn 2022. Moreover, the Bank’s updated forecasts showed a grim outlook for the UK economy, with GDP set to contract for two years starting in Q3 2022. This would be the longest recession on record, and would mean that the economy ends this parliament smaller than it was at the start. Unemployment is also forecast to rise by around 1 million, to levels not seen since the financial crisis. A sliver of good news is that inflation is now set to peak somewhat lower, at 10.9 per cent in October (compared to 13.3 in the Bank’s previous forecast), before falling back through next year. Real post-tax household income is projected to fall by around £800 next year, illustrating the scale of deepening cost-of-living crisis. But the Bank’s forecasts suggest that those on lower incomes are likely to be disproportionately hit with the food inflation – which makes up a larger share of spending for those on lower incomes – set to stay above 15 per cent for at least six months. All this makes clear the challenges facing the Chancellor as he prepares for an Autumn Statement in which he must balance supporting people through the tough period ahead, with repairing the public finances. In this context, the Bank has done the Chancellor a huge favour by acting to push down market interest rates which will feed through into a lower cost of borrowing for the Government.

The Bank today tightened policy for an eighth successive meeting – by 0.75 percentage points, its eighth successive rise and the largest since the 1980s – but signalled rates would not rise above 5 per cent, as markets had (until today) been expecting. As shown in Figure 1, the rate curve used to underpin the MPC’s projections embodied rate rises to around 5.25 per cent (based on rates in the seven days to 25 October). But the Bank provided clear guidance that this was too high and that we should expect rate rises, but “to a lower peak than priced into financial markets”. Rates have fallen since the Bank’s data cut off (see yellow line in Figure 1), and even before factoring in any reaction from today’s announcement suggested rates would peak at around 4.75 per cent. This is, however, still the sharpest rate-tightening cycle in more than 30 years.

Figure 1: The Bank has signalled that it does not expect rates to go over 5 per cent 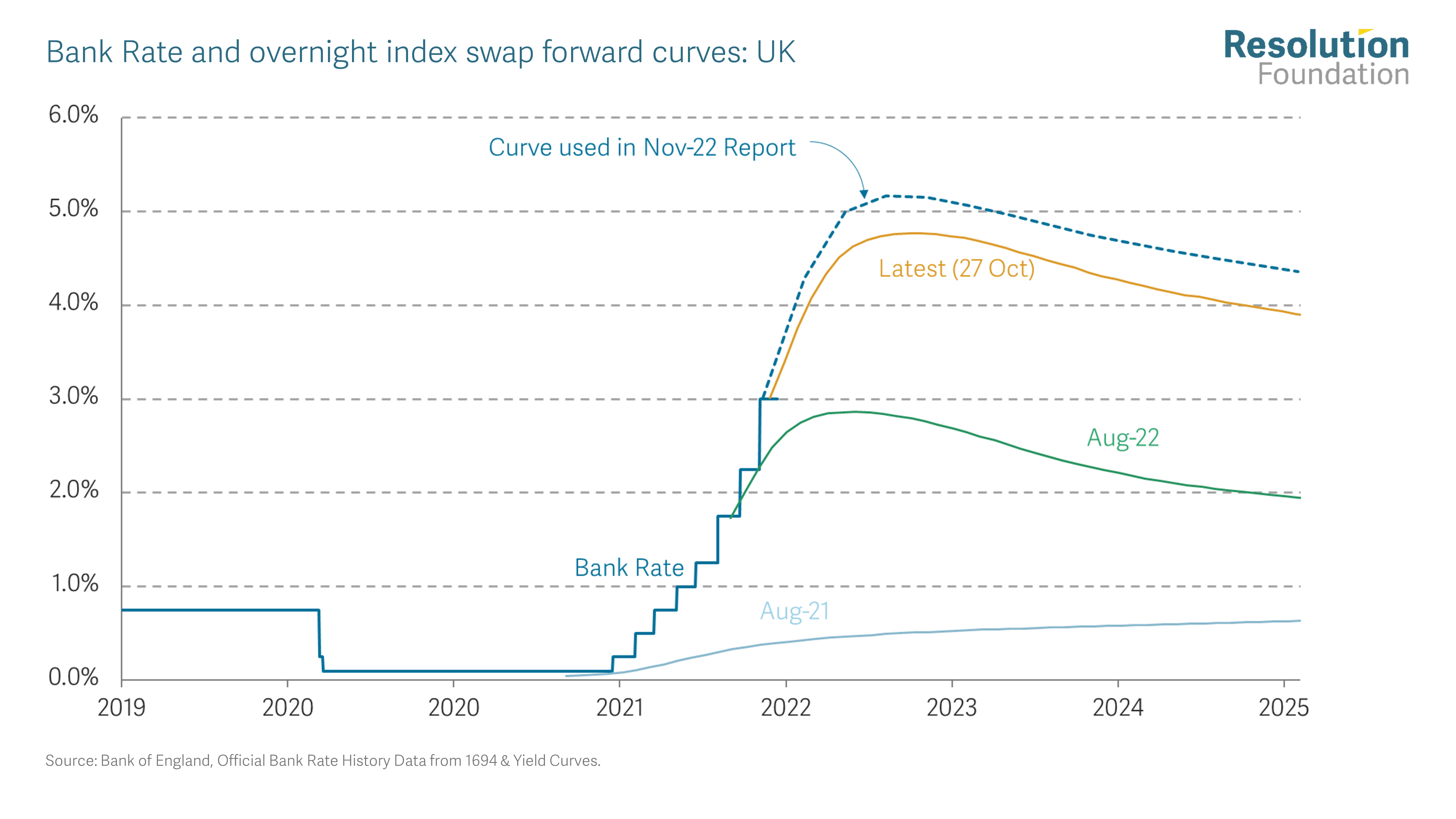 Mortgage payments are still set to rise very sharply for many

The fact that the Bank has scaled back expectations of future rate rises will be good news to 1.2 million families on variable-rate mortgages, as discussed in our previous work, but rate rises in recent months still mean that payments are set to increase rapidly for many households. Indeed, between 400,000 and 500,000 households are expected to roll onto new mortgage deals every three months. This means that, by the end of 2024, 5.1 million households will have seen their mortgage costs increase substantially, with an average annual increase of £3,900 relative to Autumn 2022 (based on the interest rate expectations in the yellow line in Figure 1 that are lower than those used in the Bank of England forecasts). 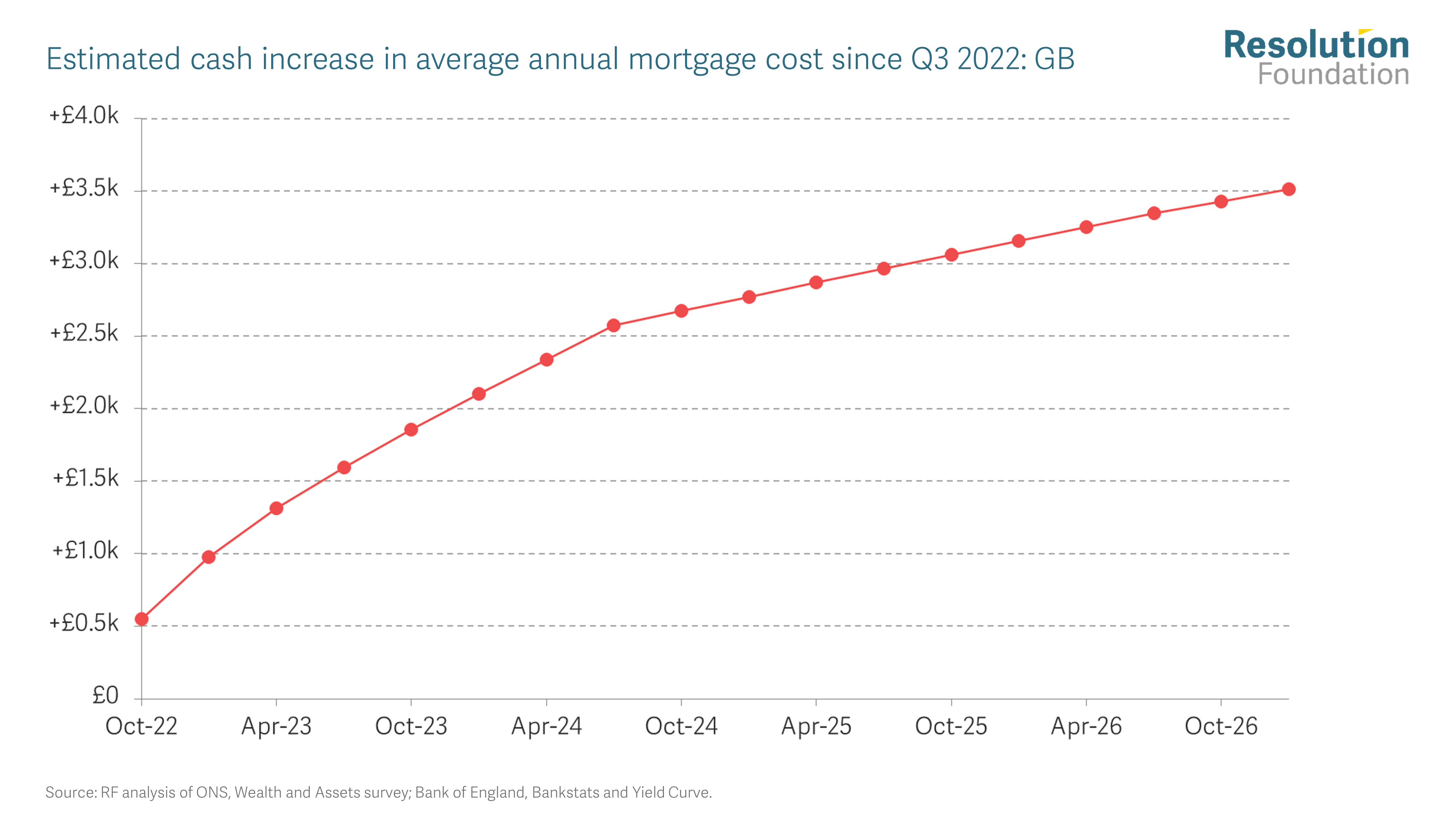 The Bank of England’s November projections is one of the most pessimistic around, and shows the UK has already started what it thinks will be a prolonged recession. As shown in Figure 3, the Bank has lowered its forecasts for 2023 and 2024, and is now has one of the weakest projections among a range of forecasters. The Bank‘s forecast is for eight quarters of falling GDP starting in Q3 2022; if realised, this would be the longest recession on record. It also expects GDP to contract by around 3 per cent over the course of this Parliament (Q4 2019 to Q4 2024).

Figure 3: The Bank’s forecast for GDP is one of weakest among a range of forecasters 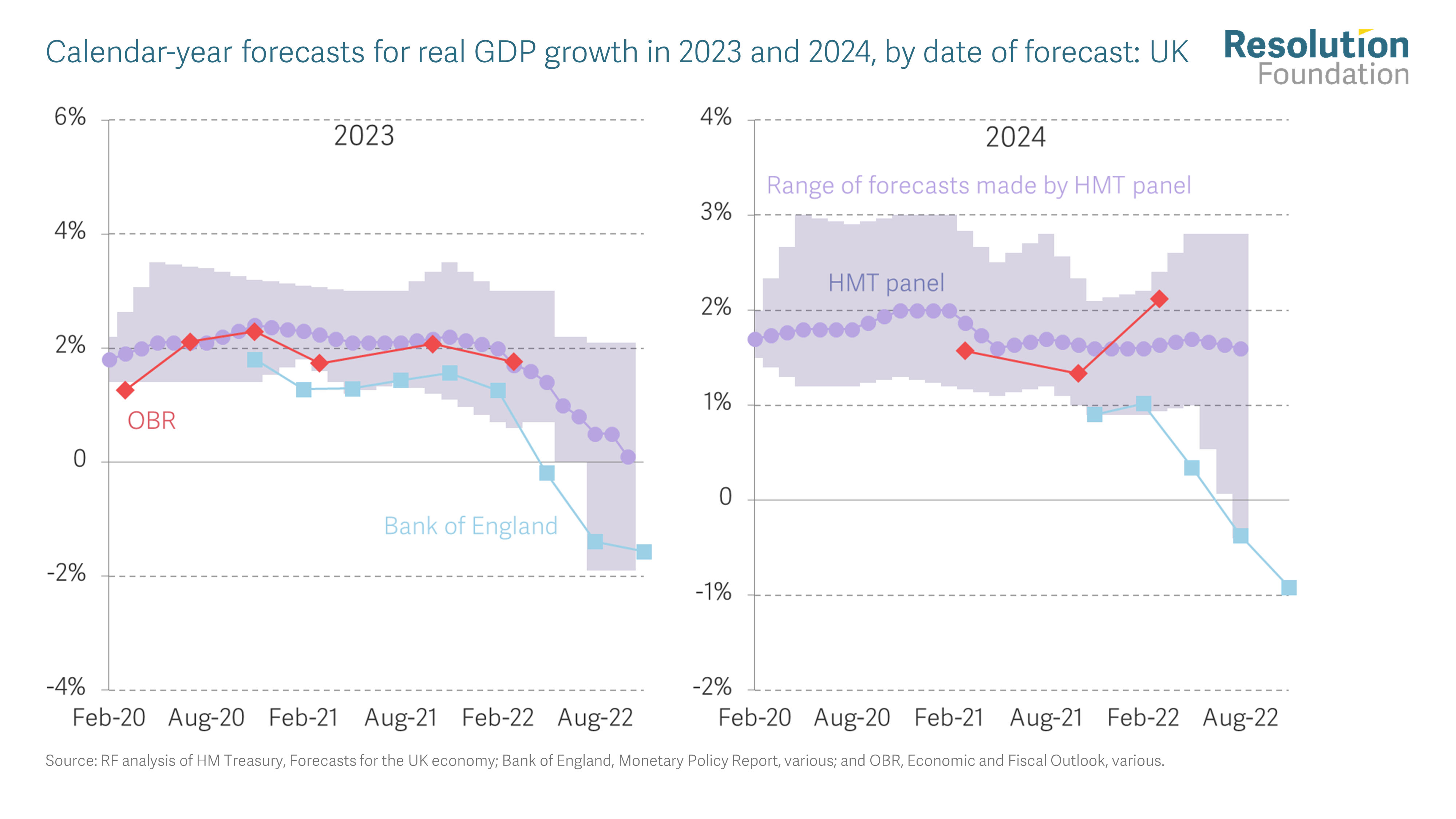 Although the labour market is currently very tight, the Bank of England’s projections show unemployment rising above levels seen during the pandemic over the next few years (Figure 4). The starting point for the forecast is a good one: the unemployment rate is currently at its lowest level since 1974 at 3.5 per cent. But this means the labour market is very tight, and the Bank is concerned that this tightness in the labour market will interact with the shock from higher energy prices to deliver lasting higher inflation through an increase in nominal (if not real) wage growth. This the key reason the Bank is raising rates. By slowing the economy and increasing unemployment, the Bank hopes to put downward pressure on wages in the medium term. Reflecting this, the forecasts for the unemployment rate now peak at around 6.5 per cent by the end of 2025, an increase of roughly 1 million people in unemployment.

Figure 4: The Bank’s forecast is for unemployment to rise by around 1 million 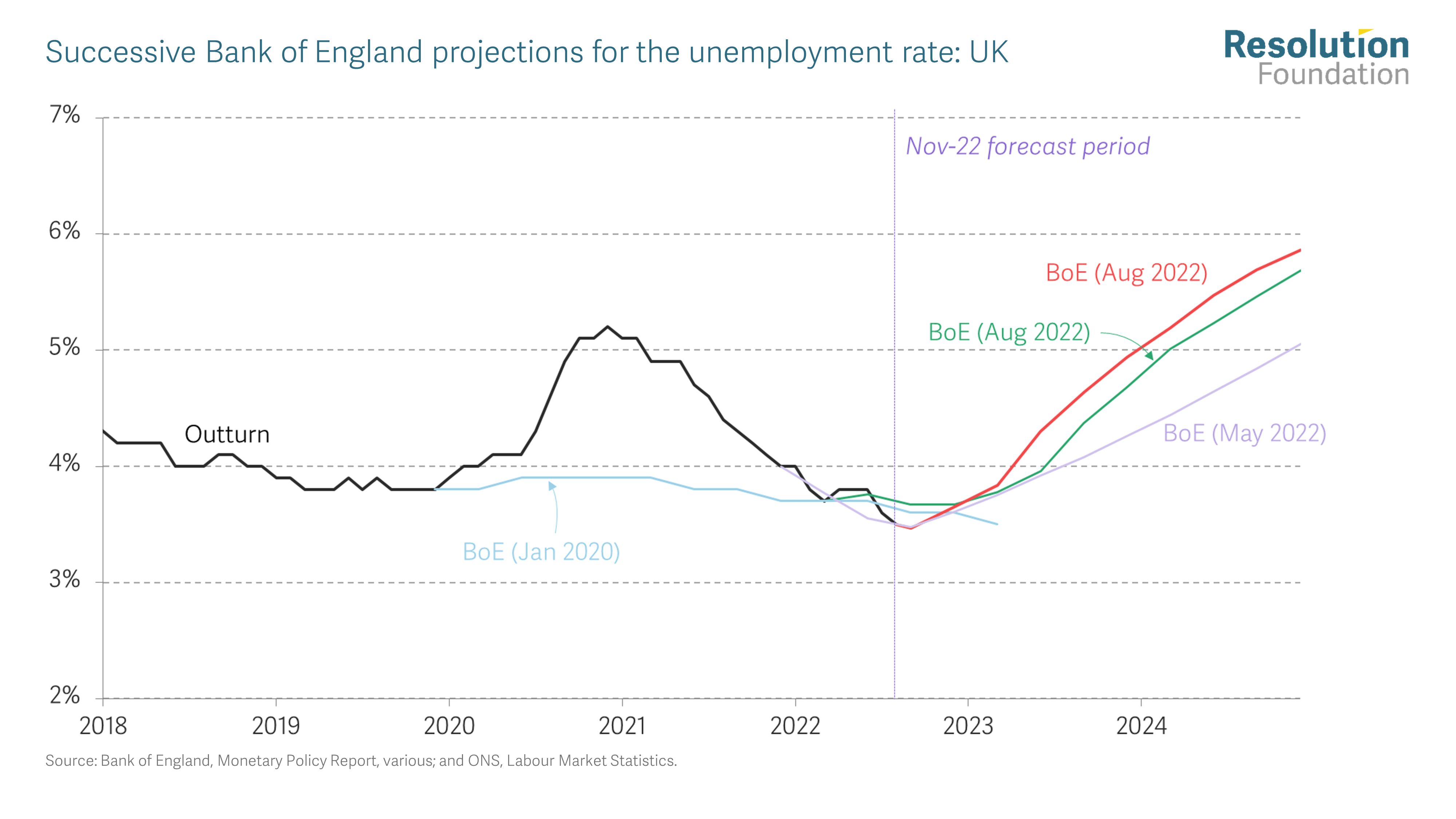 The once piece of good news is that inflation is now expected to peak at a lower level, peaking in October at 10.9 per cent, down from 13.3 per cent in the Bank’s previous forecast. This reflects the Government’s Energy Price Guarantee scheme which caps the typical energy bill at £2,500 until April 2023. Although the Government has not been clear what will replace it, the Bank has assumed that support after April 2023 will imply typical energy bills half-way between the current level of £2,500  and what would be implied by Ofgem’s usual price cap (which would imply bills reaching around £4,000 a year in 2023-24). This is clearly an important assumption, and there is currently little idea of what policy the Government will eventually choose. And if the actual support package is smaller, or if it is delivered in a way that doesn’t affect energy prices directly (for example, through direct payments), then inflation could be higher, and the outlook for growth weaker.

The cost of living crisis is set to intensify next year, particularly for those on low incomes

The Bank of England is now forecasting a grim outlook for living standards. The Bank’s latest forecast for real post-tax household income shows the broad-based damage that is coming from higher inflation. As shown in Figure 5, households will see, on average, their real incomes fall by around £800 next year. This is, however, somewhat less severe than in the Bank’s August forecasts, reflecting the announcement of the EPG and the assumption that some form of support continues for two years.

Figure 5:  Average real household disposable income is set to fall by £800 next year 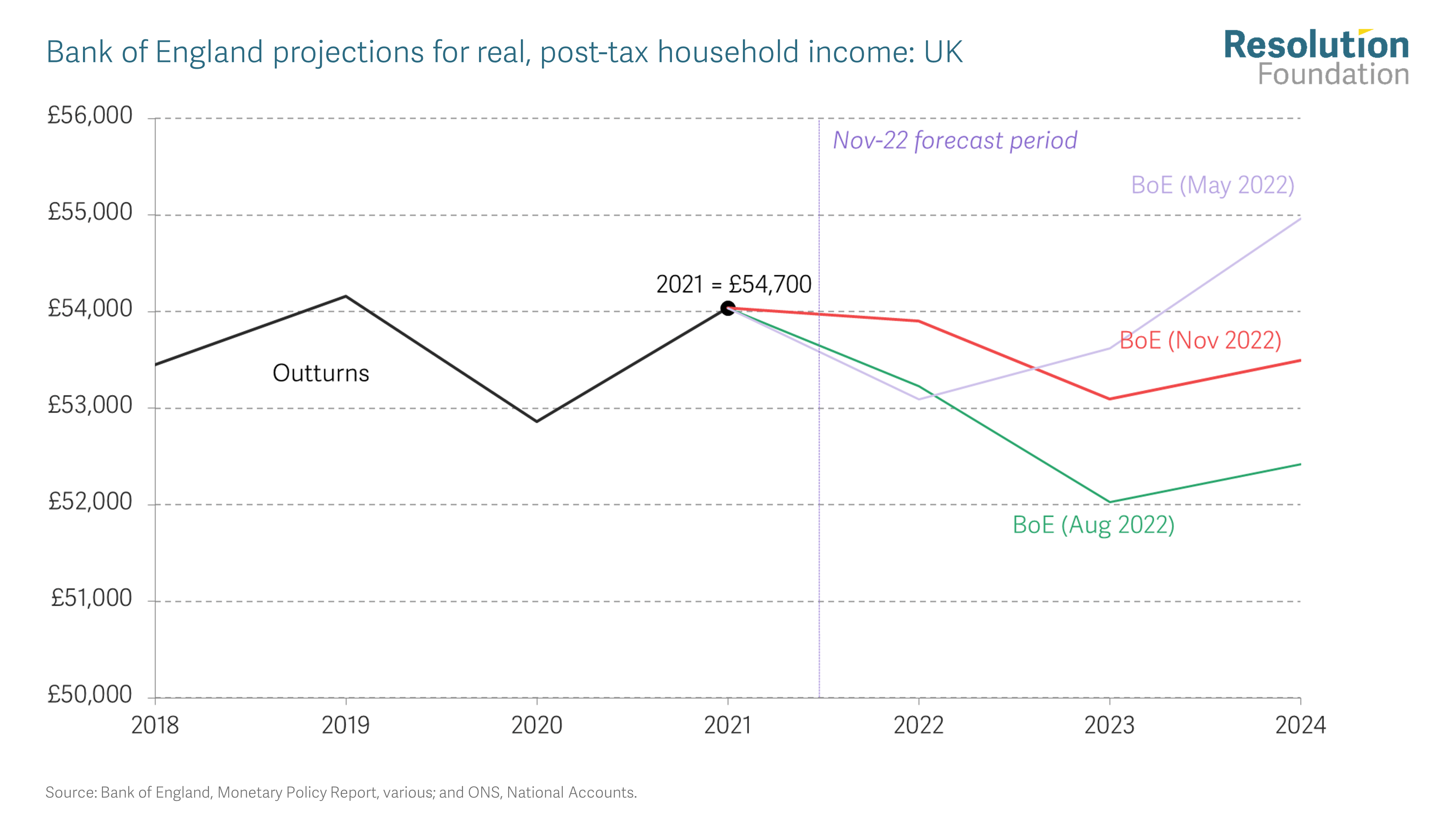 But the outlook is even more worrying for those on lower incomes. The Bank also expects consumer food and non-alcoholic beverages price inflation to rise further, and stay above 15 per cent for at least six months. The combination of food- and energy bill-driven inflation means that price pressures will be most acute for lower-income households, as they spend more of their budgets on these items.

The Government has been clear that repairing the public finances must be the priority for the Autumn Statement, a task that has been made all the more difficult by the legacy of the Liz Truss Government. In this context, the Bank of England’s active downward management of interest rate expectations – which will feed through into lower government borrowing costs – should make the Chancellor’s life easier, perhaps significantly so. Nevertheless, it is likely that a huge fiscal hole will remain. The alarming economic backdrop, and the bleak outlook for incomes in particular, provides key context for how the Chancellor should respond. Here the priority should be avoiding measures that have a disproportionate impact on those on low incomes – for example, cuts to working-age and pensioner benefits.