There are bad ideas, really bad ideas – and then there’s abolishing inheritance tax. This is the new top priority announced by the Brexit Party – one of only two policies beyond Brexit. The proposal would amount to an expensive giveaway to a tiny number of very wealthy households, largely living in the richest parts of the country and concentrated in remain voting constituencies. The fact that the proposal has been made reminds us that inheritance tax is unpopular and should provide an impetus to significant reform.

Scrapping inheritance tax is a very expensive pledge – it raised £5.3 billion last year. It’s particularly expensive at a time when it has become something of a political consensus that we need to spend more to provide what people want. Last week a Conservative government set out proposals to increase the size of the state, by almost £14 billion next year, at the price of binning their fiscal rules.

But just because something’s expensive doesn’t mean it’s a bad idea in of itself – not least if lots of people would benefit from the policy. Universal education and healthcare cost quite a lot after all. But universal this policy is not – only 24,500 of those who passed away in 2015-16 paid any inheritance tax and would have benefited from its abolition. That’s just four per cent of estates. If three people benefited from every estate, even Boris Johnson’s very expensive and very regressive proposed giveaway to higher rate taxpayers would benefit 60 times as many people each year.

Scrapping inheritance tax would give that small number of estates an average of £179,000 each. And even that average hides the fact that the tax cut would really be focused on the super-rich. If we’d abolished inheritance tax in 2015-16, 70 per cent of the benefit would have gone to those with estates of over a million pounds and a huge 40 per cent to just 1,720 estates worth over £2 million – that’s 1,720 people being given an average tax cut of just over £1 million each. That’s a hugely regressive tax cut – and that would be particularly stark at a time when child poverty is rising.

The geographic spread of the tax cut is also interesting given the Brexit Party’s public goal of showing how the north of England has been let down by the elite’s focus on London (their other non-Brexit policy is a big infrastructure investment programme for the regions outside London). This tax cut is an odd priority from that perspective. London and the South East are the big winners – they currently pay twice as much inheritance tax as any other part of the UK (as the chart below shows). It’s also noteworthy that out of the ten constituencies with the highest numbers of inheritance tax payers (Twickenham and Richmond Park top the list), all ten voted remain. 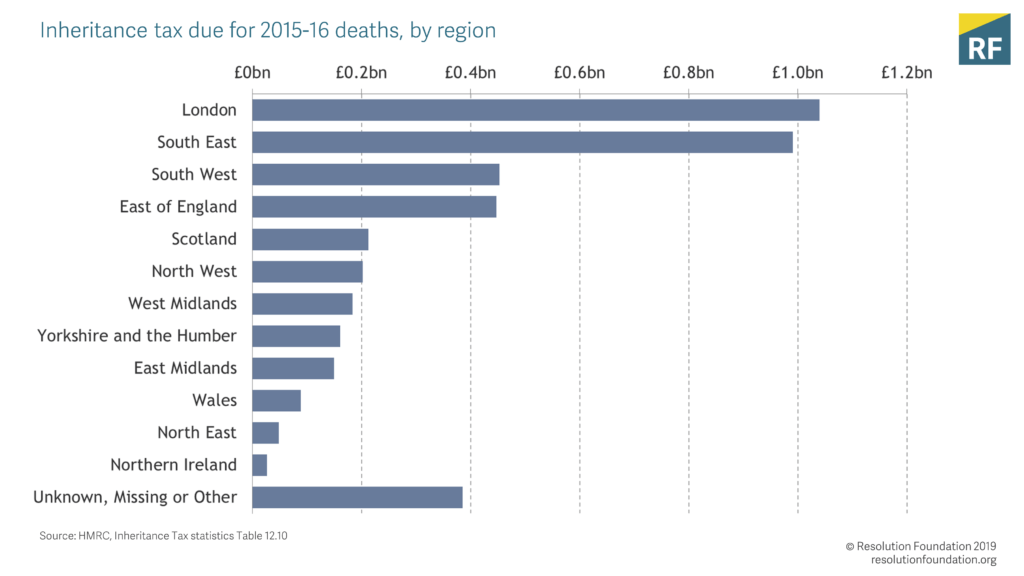 So it’s a very regressive policy that exacerbates regional inequality. The lesson of the last ten years is surely that those are not desirable attributes for a policy. But even if you don’t mind spending lots of money on the rich in the South East, there are other reasons for caution. Scrapping inheritance tax fundamentally fails to recognise one of the big trends shaping modern Britain – the growth in the importance of wealth.

Since the 1980s household wealth has grown much faster than our incomes, as the chart below shows. The result is that it’s now very hard to become rich without making sure you had the right parents – or turned things around later by marrying someone that did. 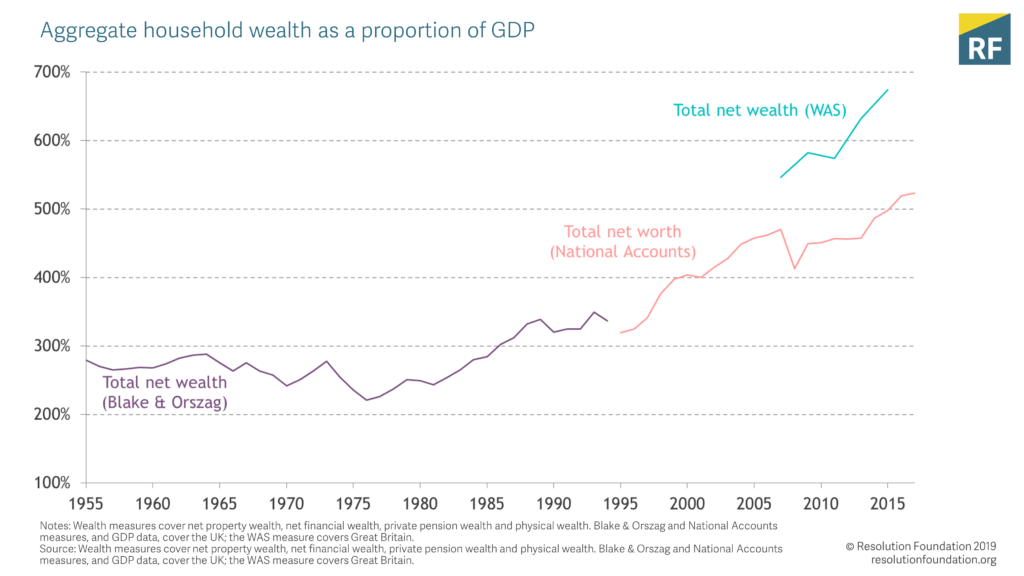 This chart also tells you why inheritances have doubled over the past twenty years, and why we project they are set to double again over the next twenty (as we show in the next chart). They will increasingly determine our lifetime living standards, both in terms of who can live where (parental wealth is increasingly determining young people’s home ownership prospects) and the kind of lives they will have.

Policy makers can’t and shouldn’t completely remove the impacts of wealth being passed down. But they do have a responsibility not to make it worse. And in the long term, lower or no inheritance tax for a few means higher taxes on earned income and consumption for everyone. 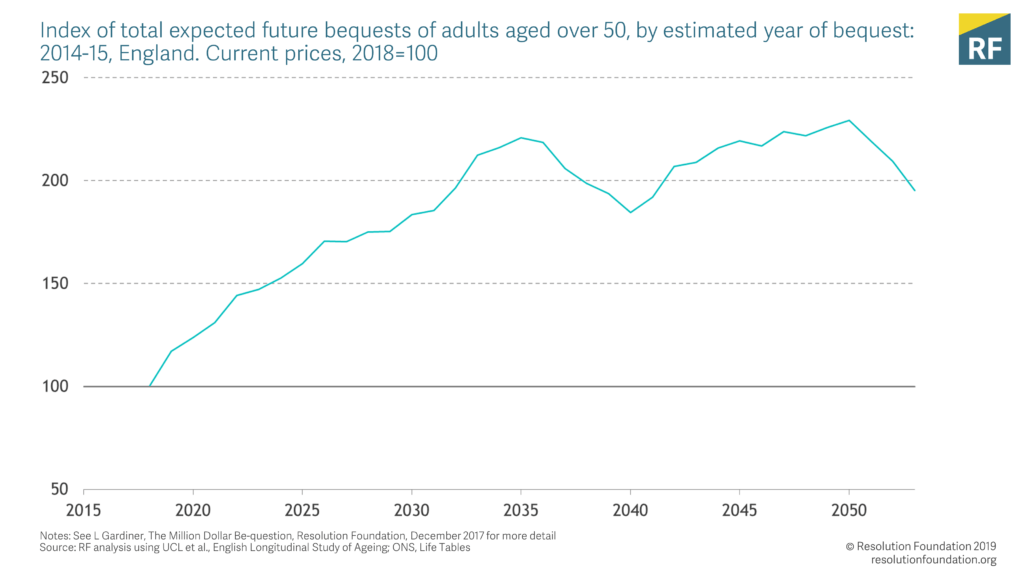 So this is a very bad idea, out of step with the trends shaping our country. But then why is the Brexit Party proposing it? There is a logic – it’s a really unpopular tax, and not without good reason. Three stand out.

First, a tax on dying is a hard sell. Second, the headline 40 per cent tax rate means people fear they could lose up to half their estates, despite that being a marginal tax rate and effective tax rates for even the largest estates generally coming in below 20 per cent, as the chart below shows. Third, the wide range of exemptions that those with tax advisors and liquid assets are able to exploit also undermines faith that the system is fair. 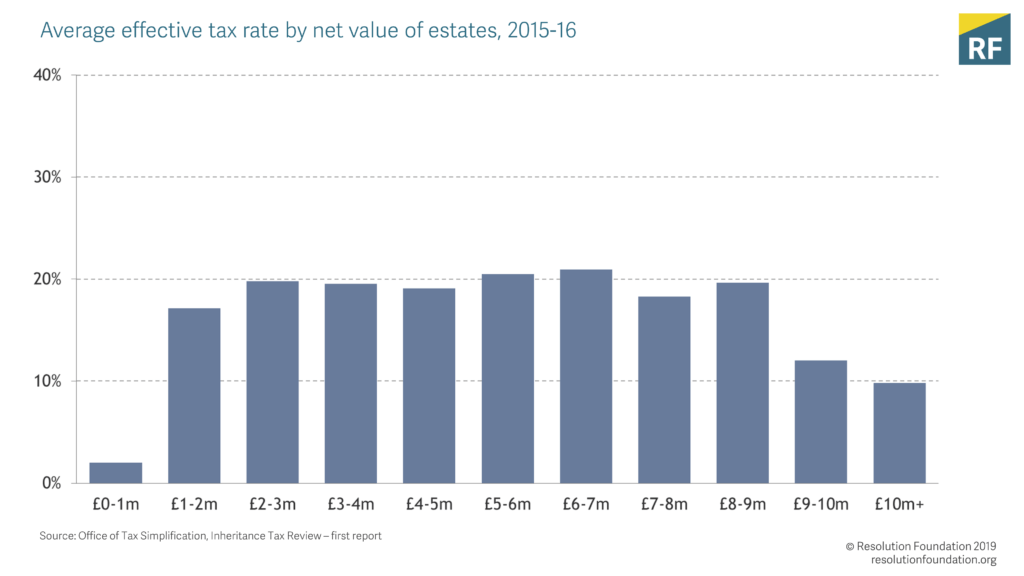 Policy makers should respond to the unpopularity of inheritance tax. But rather than scrapping it we should replace it with a tax paid by those lucky enough to receive an inheritance, rather than those unlucky enough to pass away. Unjustified exemptions that are widely abused should be removed or restricted, allowing the marginal rate of inheritance tax to be reduced to 20 per cent for most. Whether you’re for leave or remain, it’s crucial to recognise that fairer taxes on wealth are crucial to making a success of 21st Century Britain. Scrapping inheritance tax isn’t.