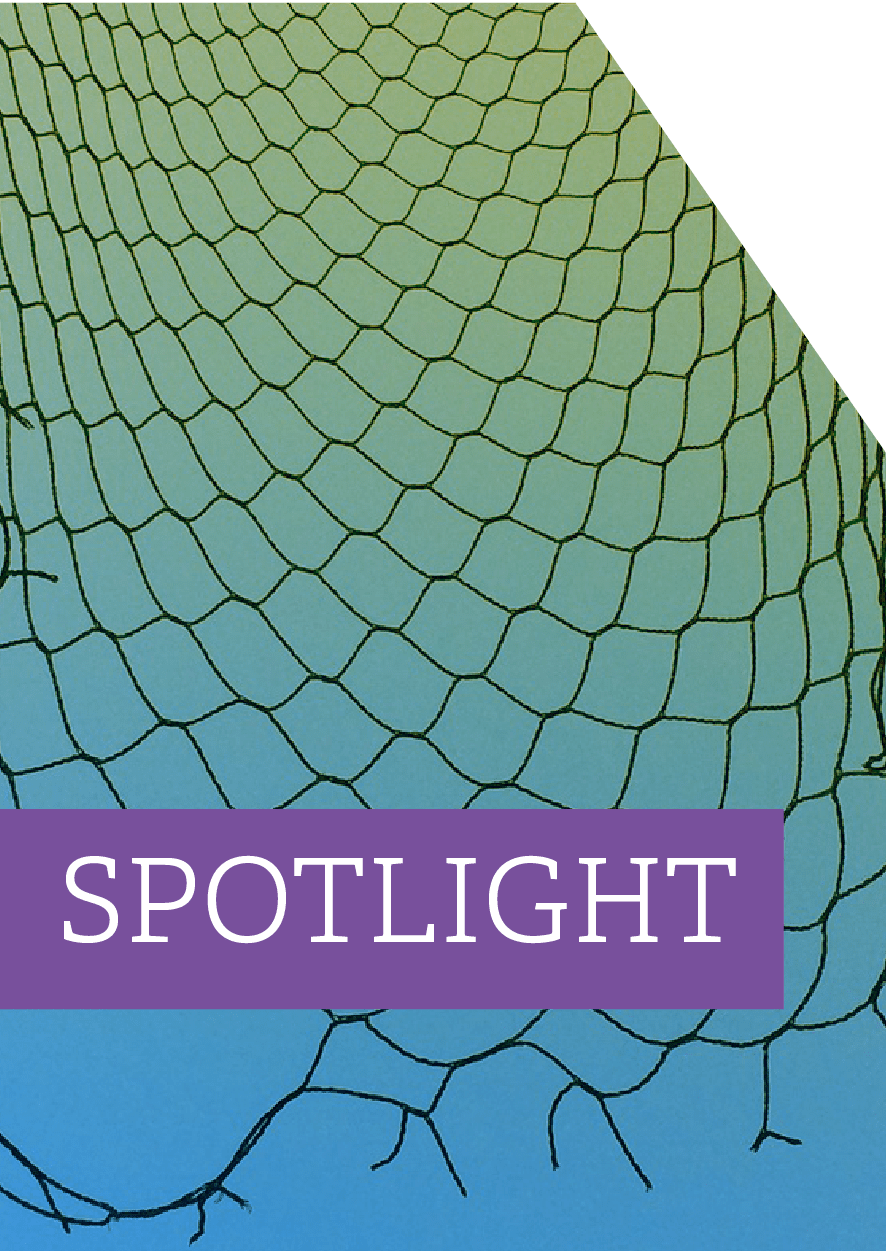 The coronavirus crisis is expected to hit workers hard, with evidence from previous crises indicating that the young are likely to be affected to a greater degree than most. In this spotlight we move from speculation to evidence, presenting new findings on how different age groups – and in particular the young – have been affected.

Younger and older workers have experienced the brunt of the hit to jobs and pay, with the very youngest in the most challenging position. One-third of 18-24-year-old employees (excluding students) have lost jobs or been furloughed, compared to one-in-six prime-age adults, with these experiences also more common among employees in atypical jobs. Similarly, 35 per cent of non-full-time student 18-24-year-old employees are earning less than they did prior to the outbreak, and 30 per cent of those in their early 60s, compared to 23 per cent of 25-49-year-olds.

The Coronavirus Job Retention Scheme has been well-received, especially by the youngest workers: around two-thirds of 18-24-year-olds who have been furloughed are happy about that outcome. And around seven-in-ten 25-39-year-olds in work are currently working from home at least some of the time. This is also the age at which workers are most likely to expect to work from home more in the future than they did before the coronavirus outbreak.

This spotlight looks at the labour market effects of the coronavirus crisis, zooming in on the impacts across different age groups. Evidence from previous crises indicates that downturns tend to have particularly detrimental effects on younger workers. Here we turn from speculation to evidence on the jobs hit to different age groups in this crisis so far.

This spotlight builds on our previous analysis of labour market effects across the earnings distribution. The findings are based on a survey designed and commissioned by the Resolution Foundation,[1]  in partnership with the Health Foundation (although the views in this note are not necessarily those of the Heath Foundation).

Young employees are most likely to have lost work due to furloughing, jobs losses and hours reductions

We begin by looking at how different age groups have fared in terms of furloughing and work losses. We do this by focusing on the extent to which people who were in employee jobs before the crisis hit (excluding full-time students) have experienced job changes associated with reductions in earnings and/or the amount of work being done.

Our previous spotlight showed that across all ages, 15 per cent of employees had been furloughed from their main job in early May, while around 3 per cent of employees had lost the main job they had prior to the coronavirus outbreak. Figure 1 shows how these outcomes play out across age groups. The proportion of 18-24-year-old employees and, to a lesser extent, 25-34-year-old employees who have been furloughed from the main job they had prior to the coronavirus outbreak is greater than the average across all ages. Even more pronounced (and more worrying), is the fact that the proportion of 18-24-year-old non-full-time students who have lost their main job since the coronavirus outbreak began (9 per cent) is three times as large as the figure across all employees. Taking these outcomes together, we find that in early May one-third of 18-24-year-olds (excluding full-time students) had been furloughed or lost their main job. By contrast, less than 15 per cent of 35-44-year-olds fell into these categories.

Figure 1: One-third of 18-24-year-olds have lost work due to furloughing or job loss 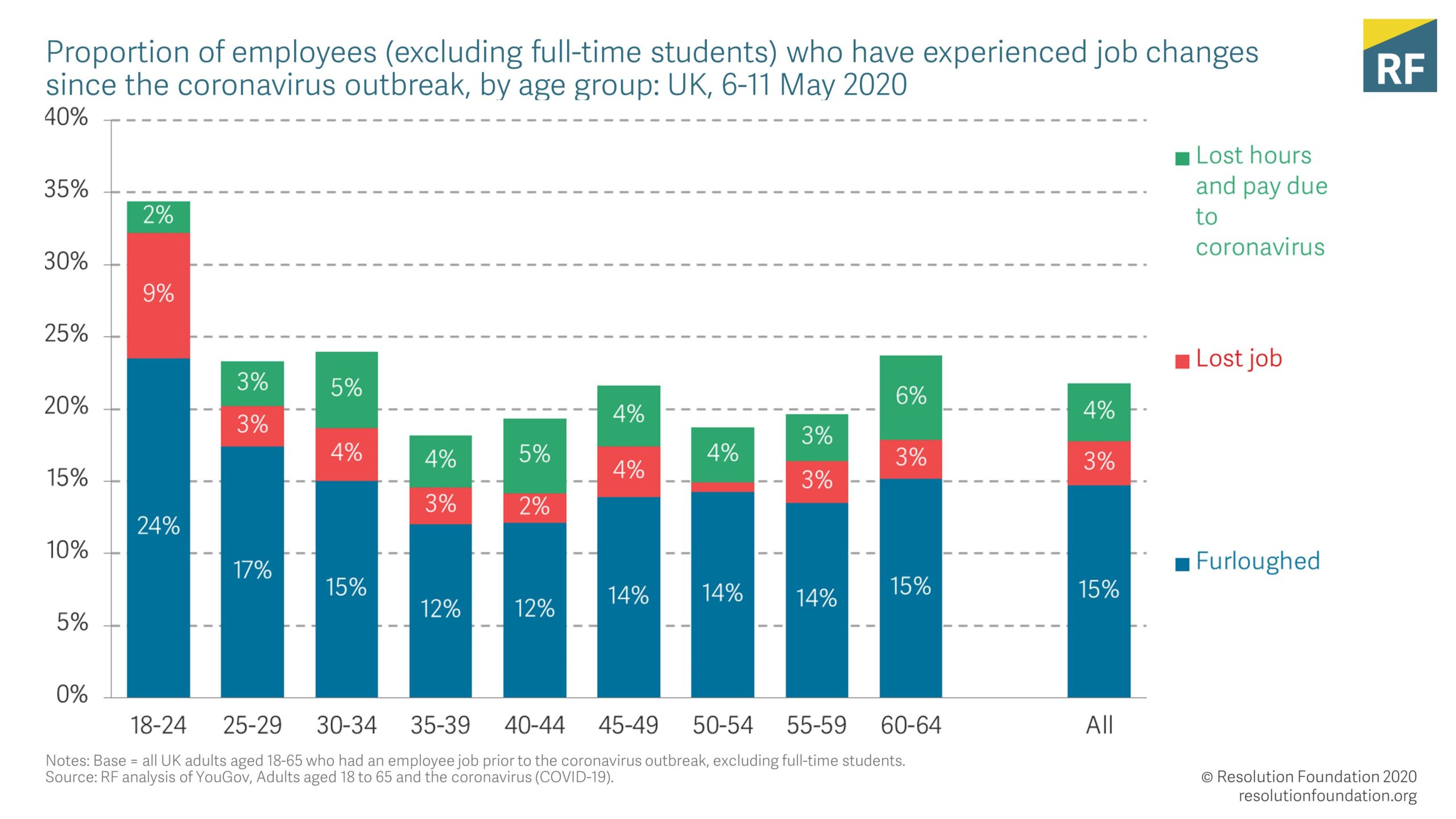 The large proportion of 18-24-year-olds on furlough and who have lost their main job is particularly worrying because these people are at the beginning of careers. As outlined in detail in previous Resolution Foundation research, young people who have recently left education and have recently entered, or are about to enter, the labour market are more susceptible to long-term employment and pay scarring.

As we showed in our Intergenerational Audit last year, young people are more likely than other age groups to work in atypical jobs. And we know from recent analysis that people in atypical work are concentrated in ‘shutdown sectors’ directly affected by lockdown measures, such as hospitality and non-food retail.

Figure 2: Two-fifths of millennials in atypical jobs have been furloughed, lost their jobs or had their hours reduced 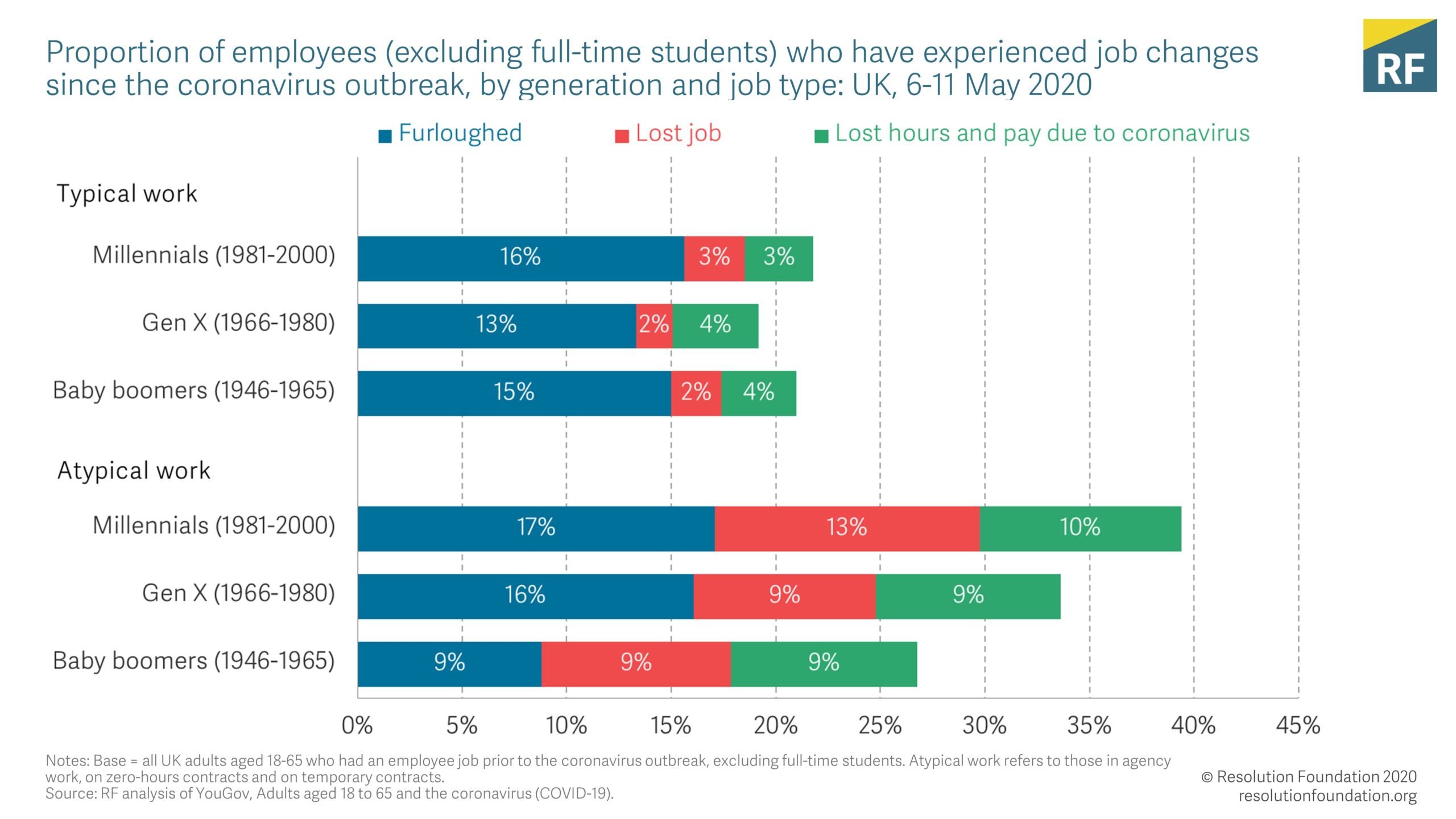 Compared to prime-age adults, a smaller proportion of young employees had the same pay in May as before the coronavirus crisis hit

Turning to pay changes, there is also a considerable age gradient. The crisis has affected the pay of the youngest and oldest workers the most. Figure 3 shows that 18-24-year-olds (excluding full-time students) have been most susceptible to pay swings: over a third have had their pay reduced since before the outbreak, and 13 per cent report pay increases. This can be compared to prime-age adults (35-49-year-olds), 23 per cent of whom have had their earnings reduced, and 5-6 per cent of whom have experienced pay increases. The likelihood of pay falls rises again for those in their late 50s and early 60s, meaning that overall, the chance of pay having fallen follows a U-shaped pattern across the age range. 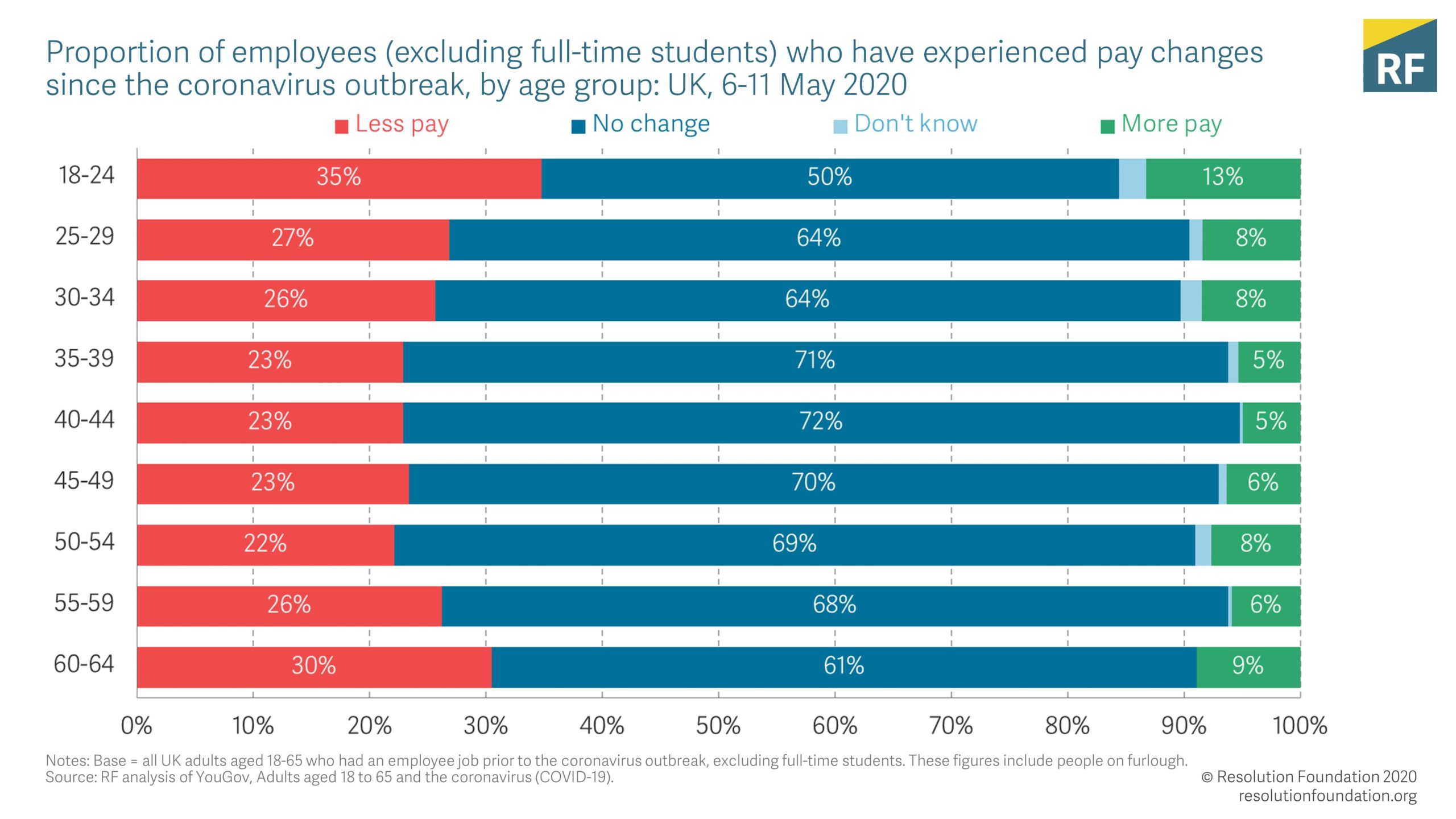 Figure 4 shows that about 30 per cent of furloughed employees are receiving more than 80 per cent of their previous pay – a pattern that is consistent across age groups. This, in combination with the widespread reports of being content about being furloughed across age groups, suggests that the scheme is providing effective support to those most at risk of negative employment effects.

Figure 4: All age groups are similarly likely to receive full pay on the furlough scheme, but the youngest are the happiest about their experience on it 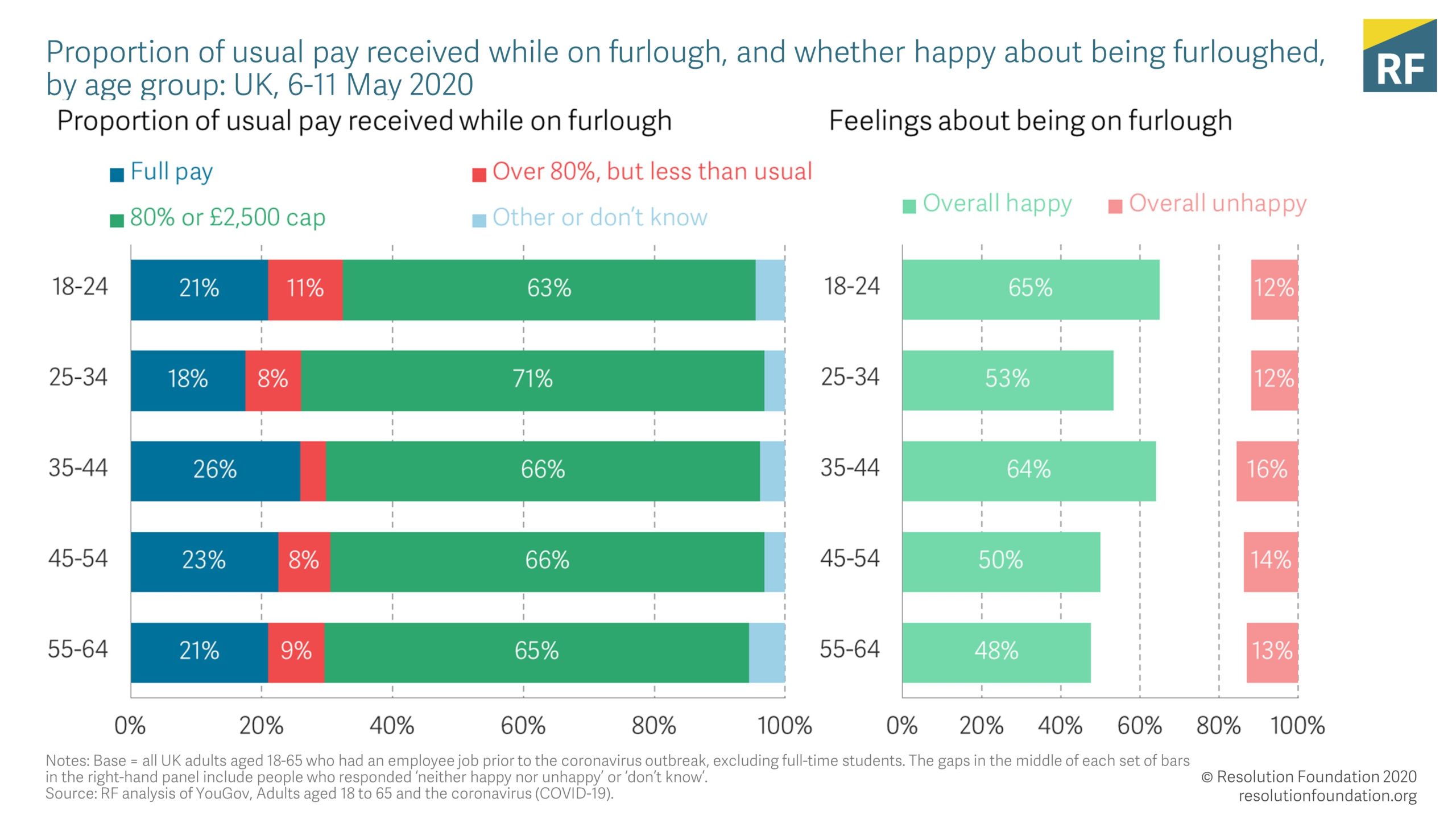 The relatively small proportion of 18-24-year-old non-full-time students who are working from home is most likely explained by a large proportion of this group working in retail and service occupations in which working from home is not possible. The steep age gradient in who expects to work from home more in future (excluding those who can’t work from home) above age 40 is harder to explain. If we were to speculate, it may be that this group is more settled in the routine of going out to work, dislikes relying on technology or is more likely to work in senior occupations that rely on social interaction.

Figure 5: The youngest and the oldest employees are the least likely to work from home during the crisis and fewer expect to do so more in future 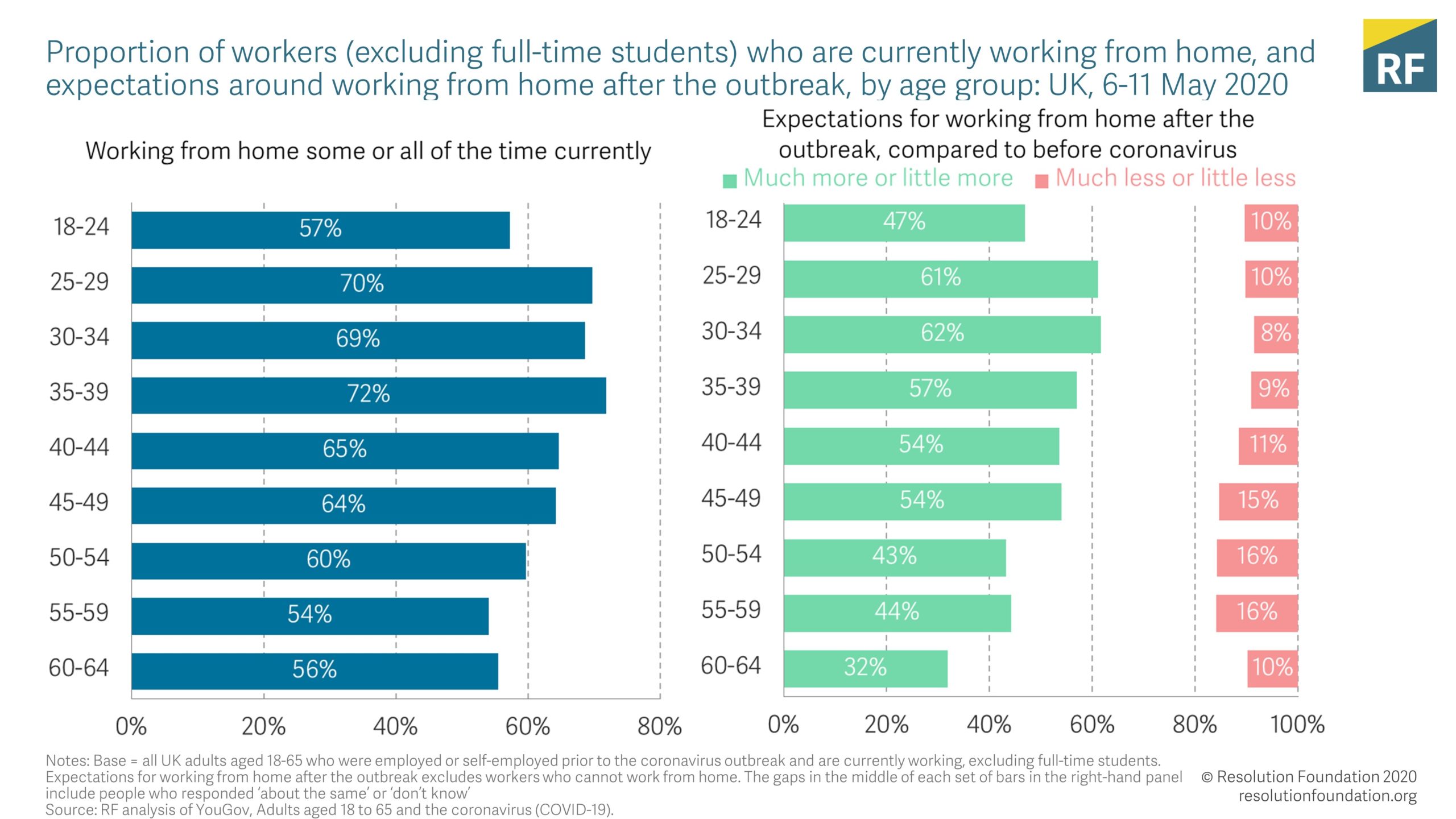 Our findings show the disproportionate impact of the coronavirus crisis on the youngest and oldest earners. These employees are more likely to have lost work or been furloughed due to the crisis than those of prime age, and have experienced the biggest pay swings with large proportions losing earnings. Government support through the Coronavirus Job Retention Scheme is helping many of these affected workers get through the crisis. As the crisis continues to unfold, comprehensive support across ages and targeted support for the very youngest workers will be essential to minimise the damage done, and especially to minimise long-term employment and pay scarring for the young.

[1] The survey was conducted using an online interview administered to members of the YouGov Plc UK panel, which is made up of 800,000+ individuals who have agreed to take part in surveys. The total sample size was 6,005 adults aged 18-65. Fieldwork was undertaken during 6-11 May 2020.  The survey was carried out online. The figures presented here have been weighted and are representative of all GB adults (aged 18+) according to age, gender, and region. The figures have been analysed independently by the Resolution Foundation and are not reflective of YouGov statistics.