While post-Budget debates on austerity and tax cuts rumble on, one clear living standards win on Monday was an increase in the National Living Wage (NLW). But beyond announcing the rate for next year, the government also used the Budget to set out a bold new aspiration that could have major implications: ending low pay.

This marks a serious upping of the ante in the political competition over the minimum wage. It’s not hard to see why. It’s hugely popular with the public, with polling finding it was, along with extra NHS spending and tax cuts, one of the best-received policies of this Budget. Raising the wage floor also makes economic sense. The UK’s minimum wage will be 20 next year. The huge positive effects are pretty obvious – who doesn’t like a pay rise? – and the huge body of research conducted over those two decades suggests that the negative effects have been pretty small.

The race off the floor

The race to raise the wage floor kicked off with the announcement of the National Living Wage, the legal minimum for those aged 25 and over, in July 2015. It has risen quickly since then, with Budget 2018 confirming a further 4.9 per cent increase from April. This is well ahead of current growth in average earnings and faster than the NLW increases of the past two years. It’s not quite the “£9 in 2020” that George Osborne touted in 2015 (that marker isn’t likely to be passed till 2022), but it’s still a rapid increase over a short period. 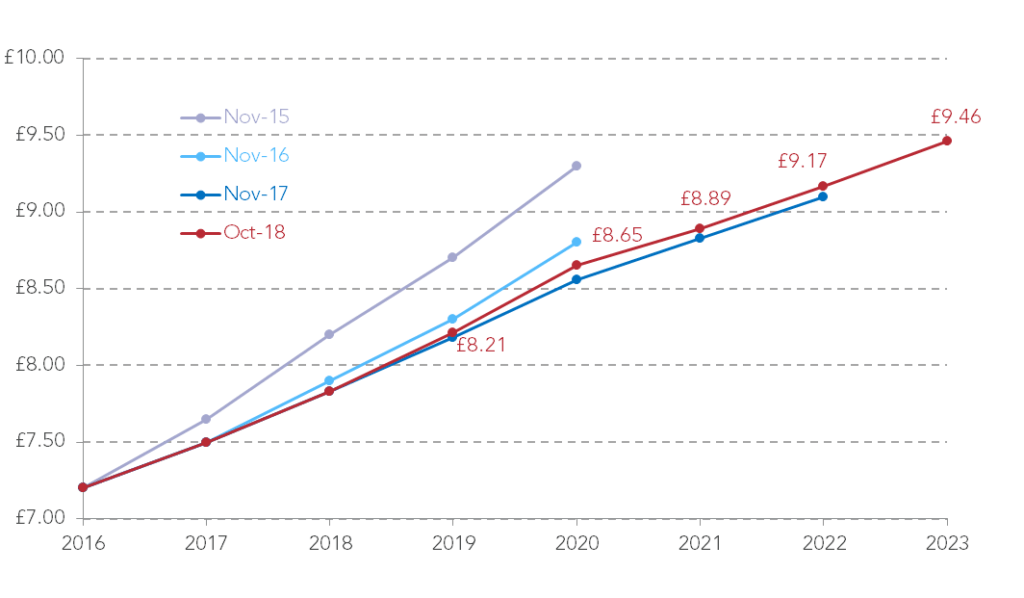 The reason why “£9 in 2020” hasn’t materialised is because of the way the NLW is structured. The aim, provided economic growth is sustained, is for the NLW to be equal to 60 per cent of typical earnings for those aged 25+ in 2020. The £9 figure was based on expectations back in 2015 of how median earnings would rise. Sadly, those pay projections have proven too optimistic.

Labour’s 2017 manifesto went one (pound) better, pledging to raise the minimum wage (for all aged 18+, not just 25+) to the level of the Living Wage, which it estimated to be £10 in 2020. In some ways, this is a different tack, shifting the focus to what families need to earn to have a decent standard of living rather than linking to the wages of those in the middle.

And now the government has moved again, pledging to ‘end low pay’. In setting that out, the Budget document references the OECD definition of low pay, which is two-thirds of median earnings (and therefore much higher than the current 60 per cent ‘bite’ ambition).

How does that compare to Labour’s pledge? First, caveats and assumptions apply. On Labour’s policy, there are questions over how fixed a target £10 in 2020 would be, or whether the Living Wage calculation (currently £8.75 for the UK excluding London but with the new rates being announced on Monday) would be used. Full disclosure, I help to calculate the Living Wage.

For the government’s policy, how exactly two-thirds of median earnings is defined matters – is it just for workers aged 25 and over or everyone? Perhaps the most important difference in practical terms is that the government hasn’t set a timescale for ending low pay and has committed to consult with the Low Pay Commission and others before anything is set in stone. So while it’s unlikely to be by 2020, we can use that year to illustrate the difference between the NLW, Labour’s Living Wage and the low pay threshold. The OBR estimates the NLW will be £8.65 in 2020. Working from that suggests that two-thirds of median hourly pay would be £9.61 in 2020. That’s nearly £1 higher than what the rate will likely be in 2020, but 40p lower than Labour’s figure.

So, for all the political to and fro around the wage floor, the fact is that Phil Hammond and John McDonnell are in pretty similar territory – either approach would give the UK one of the highest minimum wages internationally. 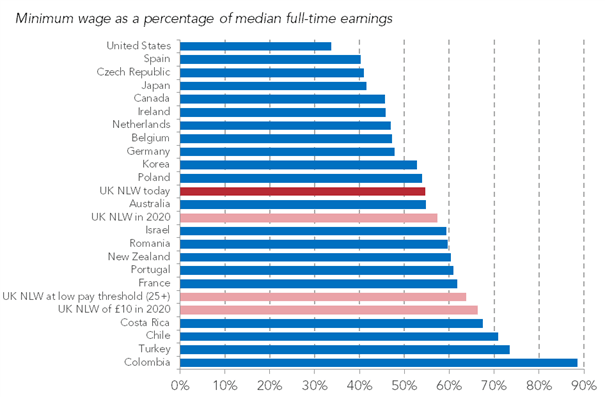 Notes: All figures excluding the four UK scenarios are taken from OECD statistics, with data for 2017 or latest year. The ‘UK NLW today’ is calculated using the current NLW of £7.83 and median full-time hourly earnings from April 2018. The bite for ‘NLW in 2020’ is calculated using the OBR’s projections for the NLW in 2020 and median full-time hourly earnings excluding overtime in 2020 terms using OBR’s assumptions for average hourly earnings growth. ‘Low pay threshold (25+)’ is calculated by taking two-thirds of median earnings for all employees in 2018, multiplied by the difference between the all-employee and 25+-employee medians in recent years, over the full-time median in 2018. ‘£10 in 2020’ uses the same approach as ‘NLW in 2020’. Each of these scenarios are indicative with uncertainty over future wage growth and the relationship between the median earnings of all employees, full-time employees and those aged 25 and over.

Raising the floor too high?

Both strategies are also controversial. Since the introduction of the minimum wage, there have been plenty of objections raised from business over its sustainability, warning of imminent job losses and business closures. On the other hand, some have taken the lack of major negative effects to mean any level of minimum wage would be deliverable painlessly.

Both of these positions fall short. The record employment rate of recent years has particularly benefited lower-income households, with little evidence of the NLW damaging the prospects of low earners. But their absence so far doesn’t mean that it’s harmless to push a minimum wage ever higher and higher.

The OBR’s analysis alongside the Budget spells this out. Though it notes the high degree of uncertainty surrounding such modelling, it estimates that a minimum wage set at two-thirds of median hourly wages would mean one in four employees being paid at the wage floor, with a further one in four affected by ‘spillovers’, as employers opt to maintain pay differentials between staff. However, their model also finds that unemployment would rise by 0.4 percentage points, or 140,000 people, as well as reducing average hours’ worked by 0.4 per cent and GDP by 0.2 per cent. While employers’ reactions are hard to predict, these are large effects with downsides worth taking seriously.

So while political ambition is welcome, parties considering this should adhere to some principles. The first is to do it slowly. Some studies from the US find negative impacts are stronger when there are large overnight jumps every few years, rather than incremental annual gains.

Second, pay attention to the evidence. Moving more slowly allows for surveys and analysis to be carried out. Even now, a few years into the NLW era, how exactly firms are adjusting remains a little unclear. Listening to the Low Pay Commission and the evidence it provides is worthwhile. This evidence has also enabled the minimum wage to become so celebrated, and blunted the objections of those ideologically disinclined towards it.

Third, don’t be afraid to take a step back. The metaphor that is sometimes used with setting minimum wages is a blindfolded person approaching a cliff edge, with unemployment or business closures lying in wait. A better analogy might be moving towards the crest of a hill: rather than a steep drop and terrible consequences, a milder slope would mean unwanted effects are spotted and can be remedied. Pressing ahead with planned increases to an arbitrary cash figure or percentage, regardless of the evidence, would be a mistake.

Beyond the wage floor

The renewed focus on low earners is welcome. But just as Gordon Brown was criticised for apparently aiming to boost the incomes of poor families to ‘poverty plus a penny’, an approach that raises the minimum wage just above the low pay threshold – or to the Living Wage – isn’t a low pay strategy.

The minimum wage is a key tool in fixing the UK’s low pay problem. But it can’t be the only one. Just one in six low earners moves onto consistently higher wages over a decade, with the odds of escaping unevenly distributed across different kinds of workers. Tackling the underlying determinants of low pay – education and training, childcare and support for those with caring responsibilities, the extent to which the benefit system incentivises pay progression – is just as important, if not more so, than a higher wage floor. More political competition on those would be very welcome.