Last week the Office for National Statistics (ONS) published its annual rundown of how UK households spent their money. These statistics provide the most detailed and direct insight into current living standards, and with a coronavirus-driven economic crisis in the making, they also give us a guide as to how we might expect things to pan out in the rest of this very unusual year.

The big picture from the ONS release is that, after several years of steady increases, household spending has stagnated. In 2018-19, average weekly household spending was £586, down slightly on the year before and not far off from the figure for 2016-17 (£582). We should be wary of drawing too much from these trends, not least due to growing underreporting of consumption in the Living Costs and Food Survey, but they do match the recent stagnation in income growth, as the chart below shows. 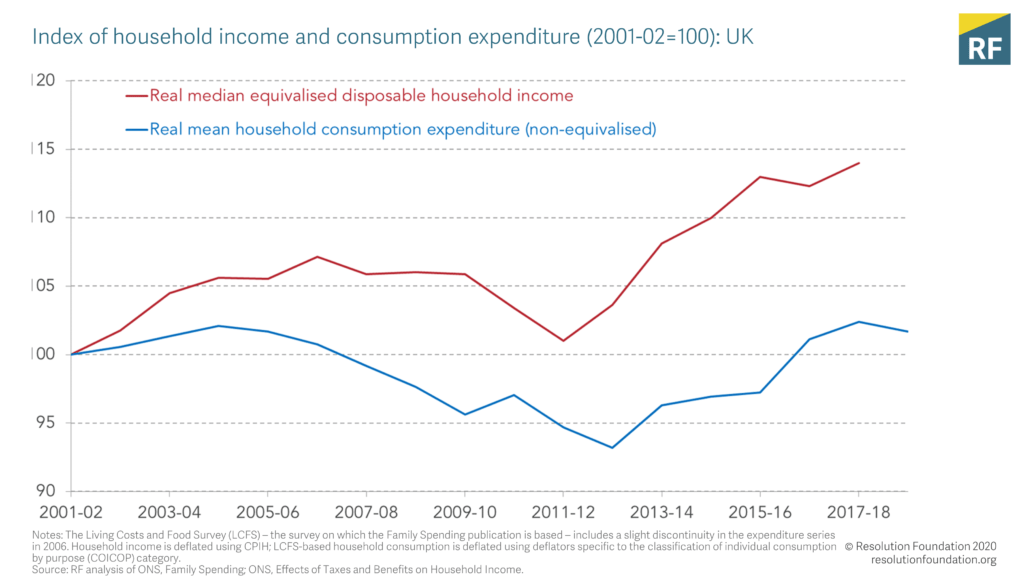 This stagnation in consumption, in part due to two years’ worth of Brexit-induced uncertainty, is likely get much worse as the economic impacts of coronavirus play out over the rest of this year. With job losses as a result of social distancing measures likely to be concentrated in lower-paying sectors, it seems highly likely that the incomes of those at the bottom end of the income distribution will be hit hardest.

This is important, because previous analysis by the Resolution Foundation has shown that the proportion of spending that goes on what we categorise as essential spending (housing, fuel, food, clothing and transport) went up significantly in the years since 2006 and never really recovered. This is particularly the case among low-income households, for whom essentials typically make up a larger proportion of the spending basket. By 2018-19, they constituted 57 per cent of spending for those in the bottom fifth, compared with 41 per cent for those in the top quintile (shown in blue in the next chart). The fact that essentials make up such a large proportion of spending among low-income households raises significant concerns about how those disproportionately likely to work in jobs hit by social distancing will be able to adjust their spending to cope in the current crisis. 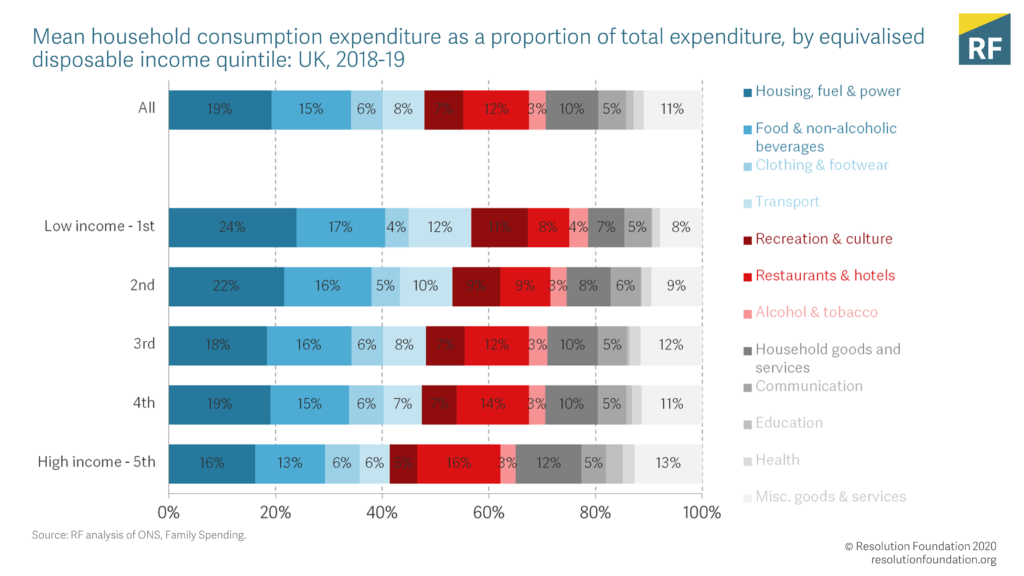 One group that has fared comparatively well in recent years is older people. Among this group, spending on essentials has fallen in the long term, while spending on what we class as ‘luxuries’ (recreation, culture, restaurants, hotels and alcohol) has grown. In 2018-19, older households continued to spend significantly more than younger ones on luxuries (as shown in the chart below). These items comprised around a third of spending for households headed by 65-74 year olds in this period. This is 10 percentage points higher than the proportion for households headed by adults aged under 30 (23 per cent). 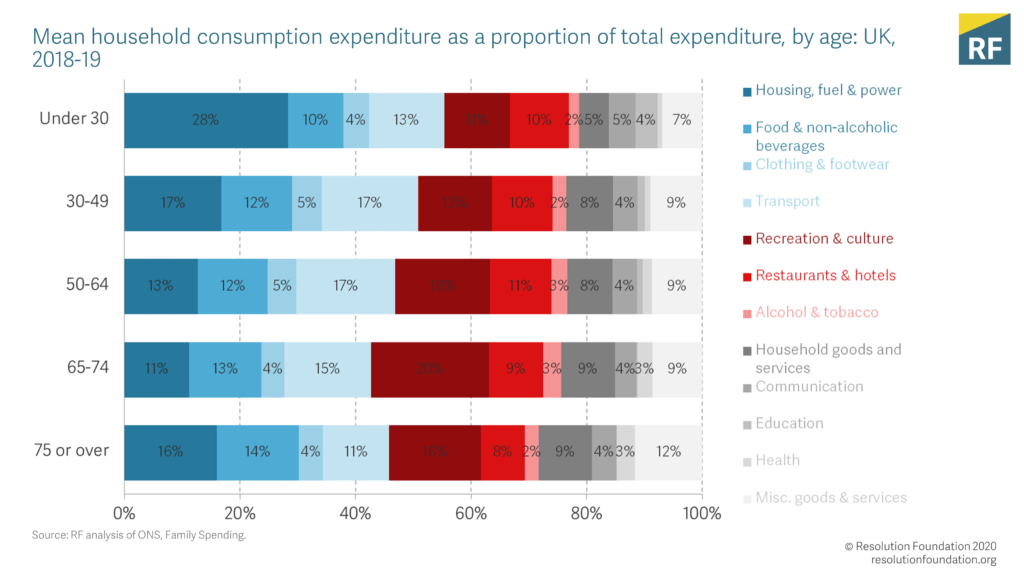 Of course, older adults face the greatest health risk from coronavirus, and so will need to engage in the greatest social distancing. This will drive big reductions in the consumption of this relatively higher-spending group, which means a relatively bigger economic shock due to reduced demand. And lower consumption by older adults most likely to spend their money on social and cultural activities – perhaps even after the most stringent social distancing measures have been lifted – may amplify the impact on the incomes of the younger and most likely lower-income adults who work in these sectors.

How the remainder of this year will pan out is unclear, but the latest spending data shows that we do not enter this crisis in the strongest position. Like income data, household spending data tells us that living standards have been squeezed in recent years, particularly for the young and those towards the bottom of the income distribution who spend the most on essentials and so have the least ability to reduce spending further. And as the economic effects of social distancing play out, with (particularly older) people having fewer opportunities to spend their money, it is the incomes of those who work in sectors affected by these measures that are most likely to suffer.