Multi-tasking can be hard. Ask any parent that survived lockdown by combining work with something resembling home schooling. But it’s also a fact of life, so the trick is to manage multiple objectives well, not wish them away. This is true for people and our Government. Indeed, fiscal multi-tasking is what the 2020s are all about.

The public finances are up in lights, with public sector borrowing heading towards £400 billion. Some argue this is entirely unsustainable and requires urgent action, while others see little constraint on government borrowing in an era of low interest rates.

Both are wrong because they fail to recognise the dual tasks facing the Government: supporting the economy today to avoid a deeper downturn, while ensuring sustainable public finances tomorrow so that we can do the same in recessions to come.

Those calling for spending to be slashed don’t recognise the Government’s crucial role in insuring households and firms against pandemic losses. That’s essential to efforts to control the virus and protect the economy, given the constraints on the Bank of England posed by low interest rates and the very uneven nature of this crisis across sectors.

Low interest rates don’t just make more borrowing necessary, they make its burden lighter – the government’s debt interest costs have actually fallen. But low interest rates do not mean there is no need to act to reduce our deficit post-crisis. We still need to repair the permanent fiscal damage left by this crisis. Crucially, having sustainable public finances also means improving them in the good times, so that we can combat future recessions too. It is exactly because we live in a low interest rate environment, and that we need to use fiscal policy so actively during downturns, that we must do more to repair the public finances in the good times.

Successful fiscal multi-tasking therefore requires the Treasury to correctly choose the size, timing and nature of the fiscal consolidation. On size, people often focus on paying back the huge borrowing racked up this year. But this is a red herring. What matters instead is how much our economy is left permanently smaller by the pandemic. This is hugely uncertain, but the Office for Budget Responsibility (OBR) think the economy will be 3 per cent smaller in 2024-25 than was expected pre-crisis. 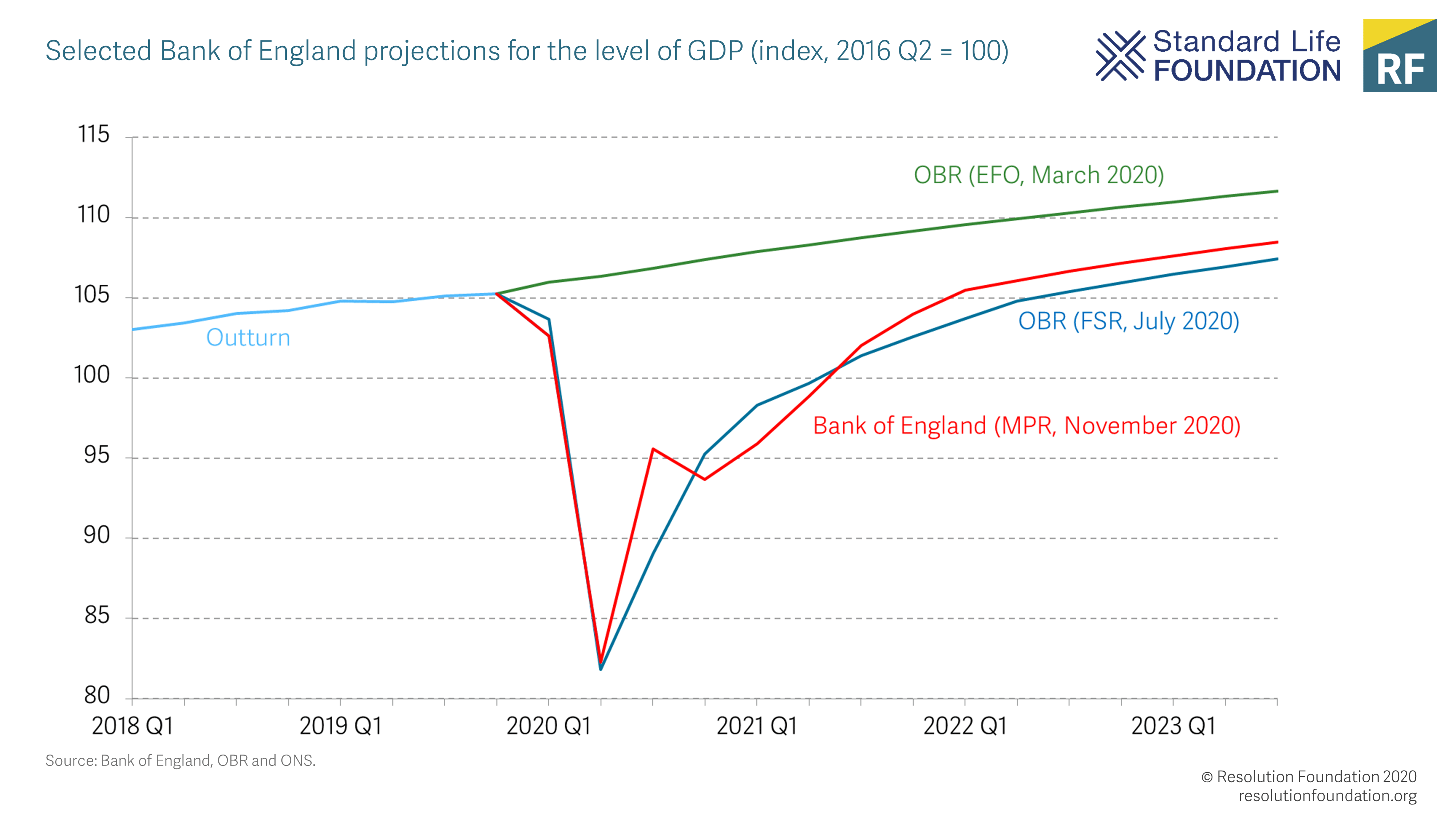 Such structural economic damage leads to structural fiscal damage, with lower tax receipts and higher spending. It is the need to address this, rather than the need to ‘pay for’ the extra spending to combat the crisis, that requires a fiscal consolidation.

And we don’t just need to stabilise the deficit in the years ahead: we also have to improve the nation’s balance sheet by around 25 per cent of GDP over an economic cycle so we’re ready for future recessions. The alternative is that each recession ratchets up our debt, which will ultimately be unsustainable. 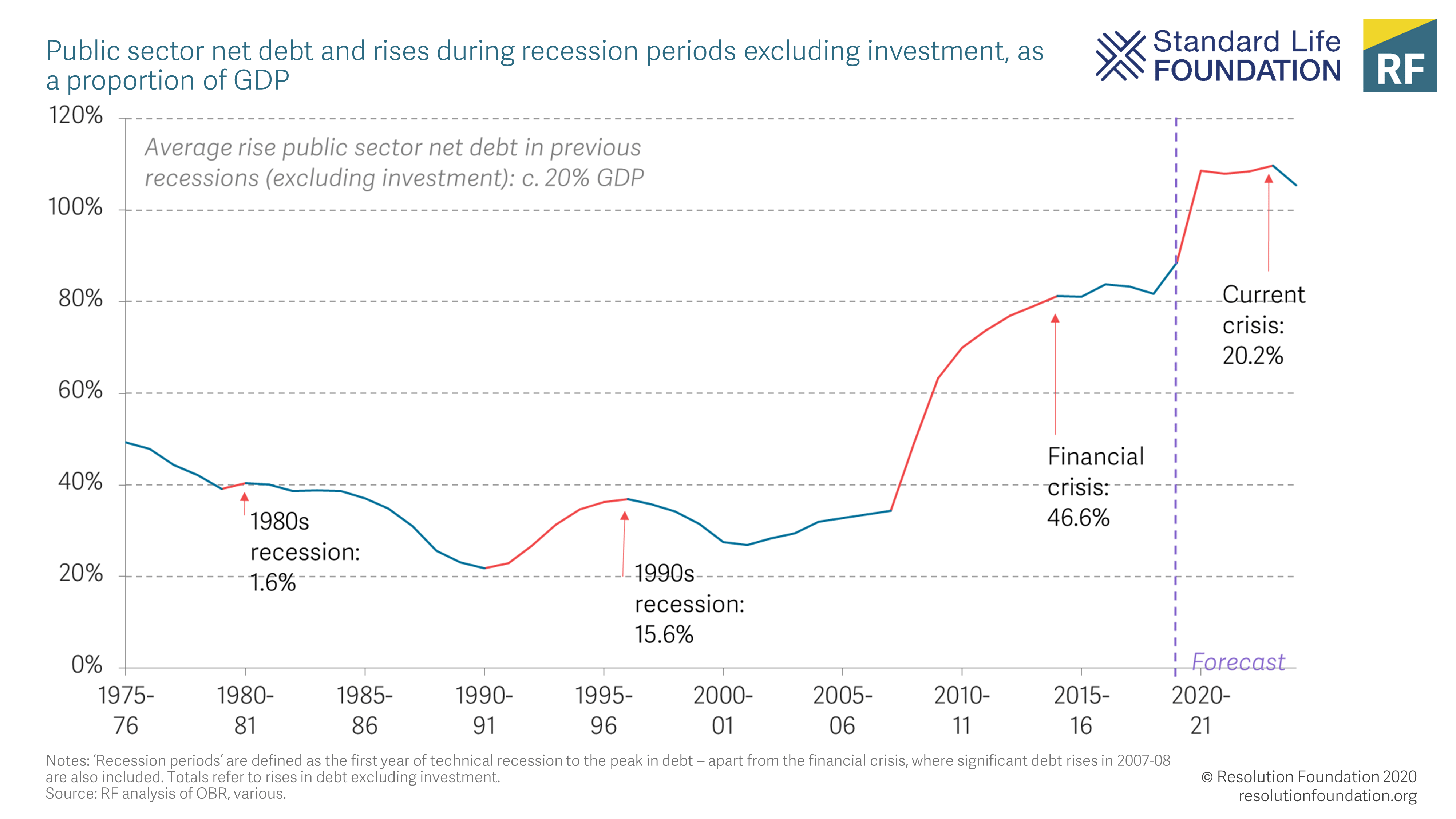 The traditional focus here is on reducing public sector net debt. But it’s time to update how we think about the public finances so that we value the assets that the government owns, not just the debts it owes. Aiming to improve public sector net worth does exactly that. If the Government doesn’t shift to targeting net worth rather than net debt, then Boris Johnson can wave goodbye to the huge increase in investment spending that is the centre piece of his ‘levelling up’ agenda – cutting investment will be the path of least resistance.

We estimate these considerations mean that a consolidation of around £40 billion is needed, but the eventual answer will depend hugely on how the crisis plays out. If the economy was six per cent, rather than three per cent, smaller post-crisis we would need another £60 billion.

This consolidation is not going to be a repeat of the austerity of the 2010s. Tax rises, rather than spending cuts, will do the lion’s share of the work. A decade of historically-unprecedented, internationally-leading, spending restraint cannot be repeated. And both the OBR and its US counterpart (the Congressional Budget Office) believe that the drag on the economy from tax rises is smaller than that from spending cuts. 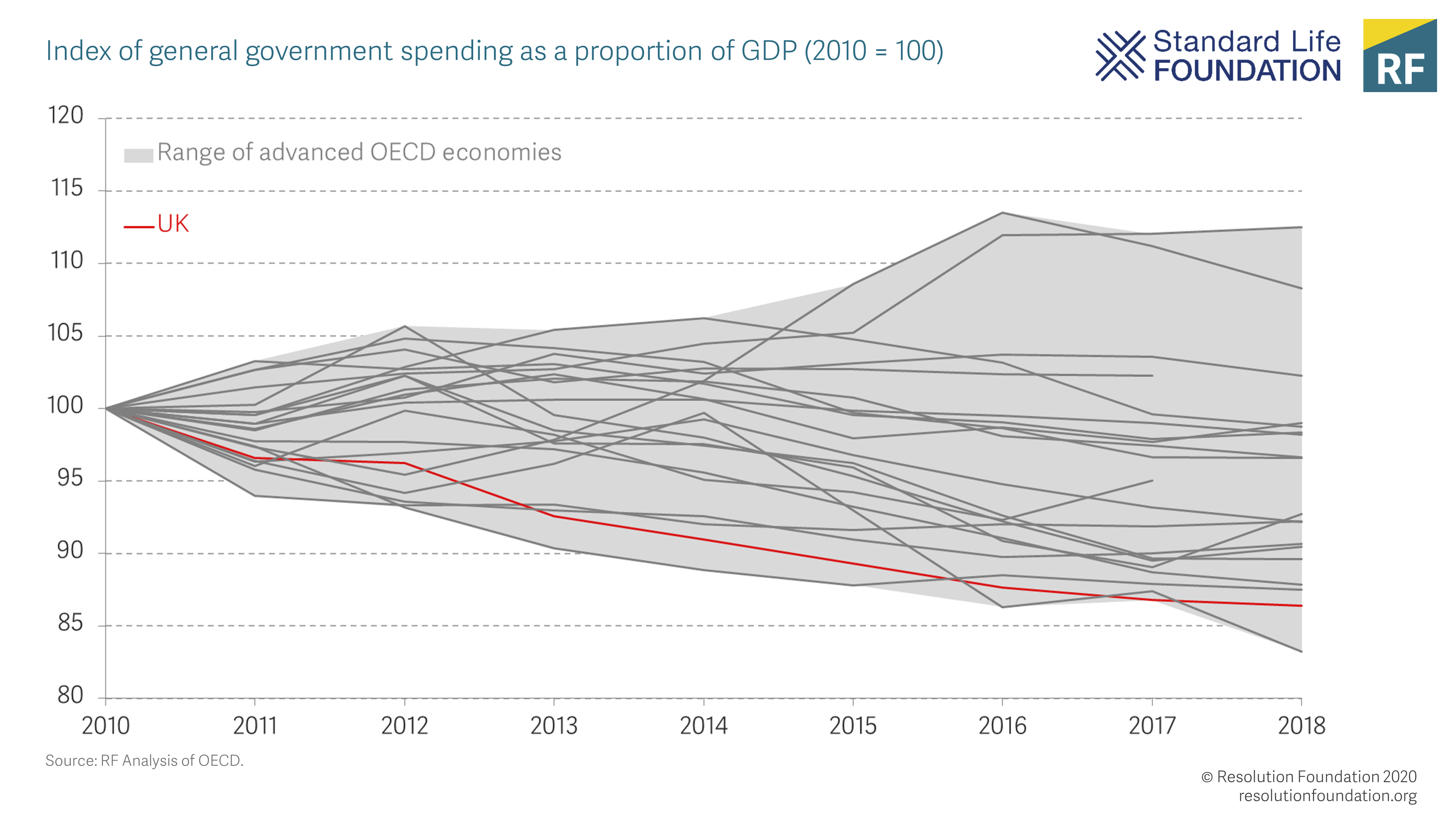 Tax increases of £40 billion would be very challenging, but not unprecedented. Two budgets in 1993 increased taxes by around £48 billion. Tax as a share of GDP would rise to around 39 per cent, the highest since 1983-84. But that would not be particularly unusual by international standards, and the direct tax burden faced by the typical employee has fallen dramatically since 1975 from 30 per cent to 18 per cent in 2019. 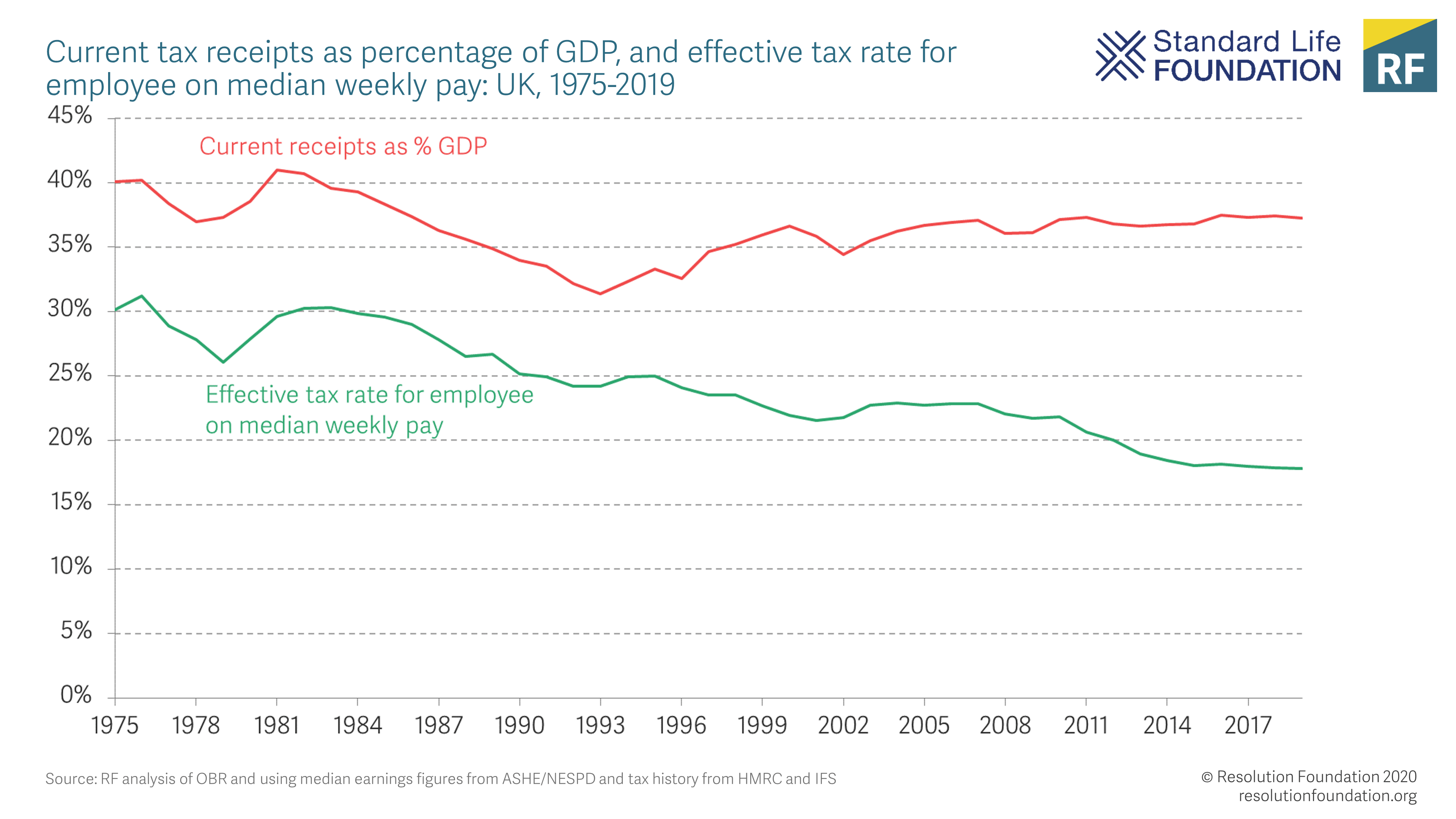 Exactly because tax rises on this scale are difficult, a successful consolidation needs to do far more than repair the public finances. It needs to be seen to be fair, support the recovery, and be part of the answer, rather than a hinderance, to addressing some of the big challenges we face as a country – like insecure work and the national disgrace of an underfunded social care system.

Windfall taxes on those that have done well during this pandemic – such as firms who have profited from higher demand or those who got big government grants but saw no real income falls – are important for building popular support. A Pandemic Profit Levy of 10 per cent on windfall profits made mid-pandemic, and a claw back of poorly-targeted Self-Employment Income Support Scheme grants, should both be pursued. But they cannot play a major role in repairing the public finances because they are by definition temporary, while the need for revenues is longer lasting.

Green taxes are also desirable given our ‘net zero’ ambitions, but will not fill our fiscal hole. Taxes on carbon emissions will rise, but that will take time and often require the revenue raised to be recycled to protect lower-income households (directing revenues from domestic heating needing to fund heat pumps, say). In fact, protecting the environmental tax take we’ve got will be hard enough. We should stop freezing fuel duty and prepare for the long-term loss of £38 billion a year of road taxes. A Home Delivery Congestion Charge, averaging 3p per delivery, would reflect the pandemic surge in online shopping, raise £100 million, and provide a pilot for broader road pricing.

There are also serious, but relatively easy, revenue raisers that are less visible to taxpayers. Freezing the Income Tax Personal Allowance at £12,500, and the £50,000 higher rate threshold, would raise £6 billion by 2024-25. Corporation Tax should also increase. The UK’s rate of 19 per cent is low by historical standards: a rise to 22 per cent would raise £10 billion while remaining below the OECD average. 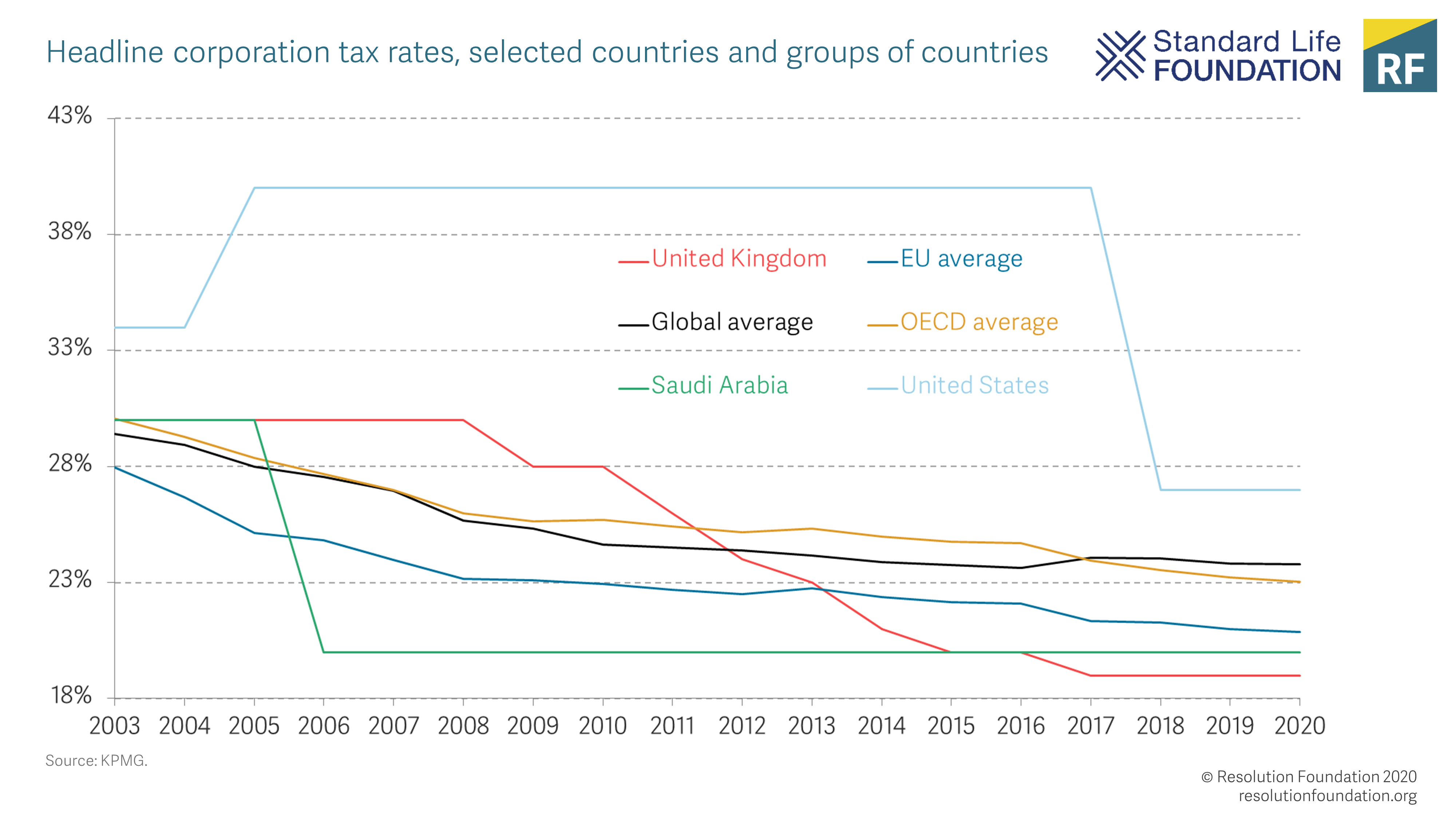 The Chancellor could also turn to long overdue reforms of our wealth-related taxes to raise a further £9 billion. Over the past four decades, wealth has risen from three to over seven times national income, but wealth tax revenues have stayed stubbornly flat. We should rationalise the allowances (including for capital gains) that allow those who can choose the form in which they take their income to pay significantly lower taxes than employees. 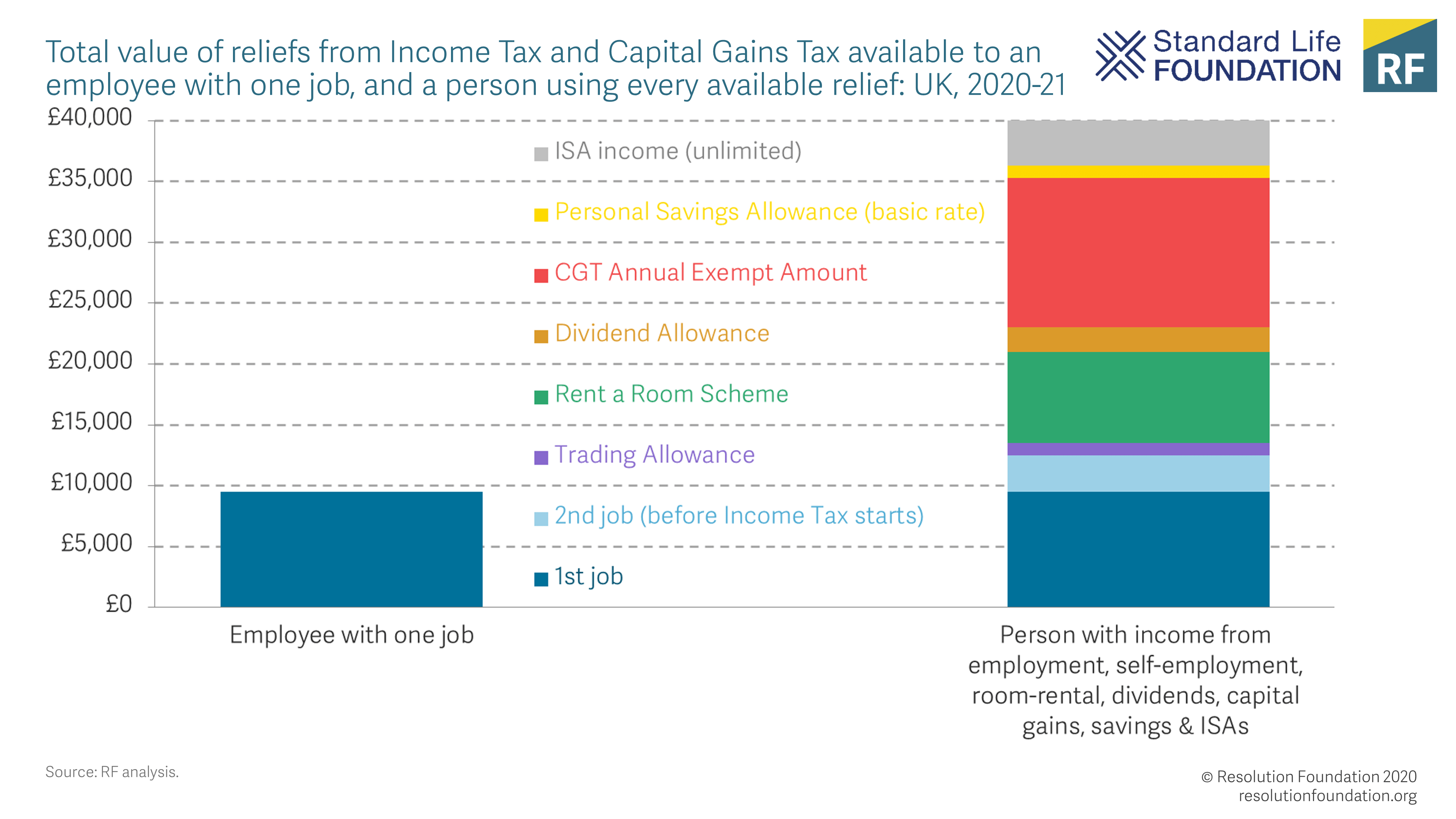 It’s also time to abolish or restrict exemptions that are either unjustified or too often abused – including those used by the very rich to get around paying inheritance tax. A Council Tax Supplement on properties worth over £2 million would address our highly regressive Council Tax. And, in the longer term, our wealth taxes should be more radically reformed.

Instead of repeating the tradition of governments raising (relatively regressive) VAT or (generationally unfair) National Insurance, the centrepiece of the coming consolidation should be a new ‘Health and Social Care Levy’ to raise significant revenue, improve our tax system and deliver badly-needed resources for social care.

A 4 per cent levy on incomes over £12,500 would be very significantly offset by a 3p National Insurance cut for employees. This would be highly progressive – employees earning below £19,500 would be better off – while raising significant revenue (£17 billion), with £6 billion of that set aside for social care. It would also reduce the tax gap that heavily incentivises self-employment, with the greater insecurity this crisis has shown it can bring, by levelling down National Insurance rates for employees to that paid by the self-employed. 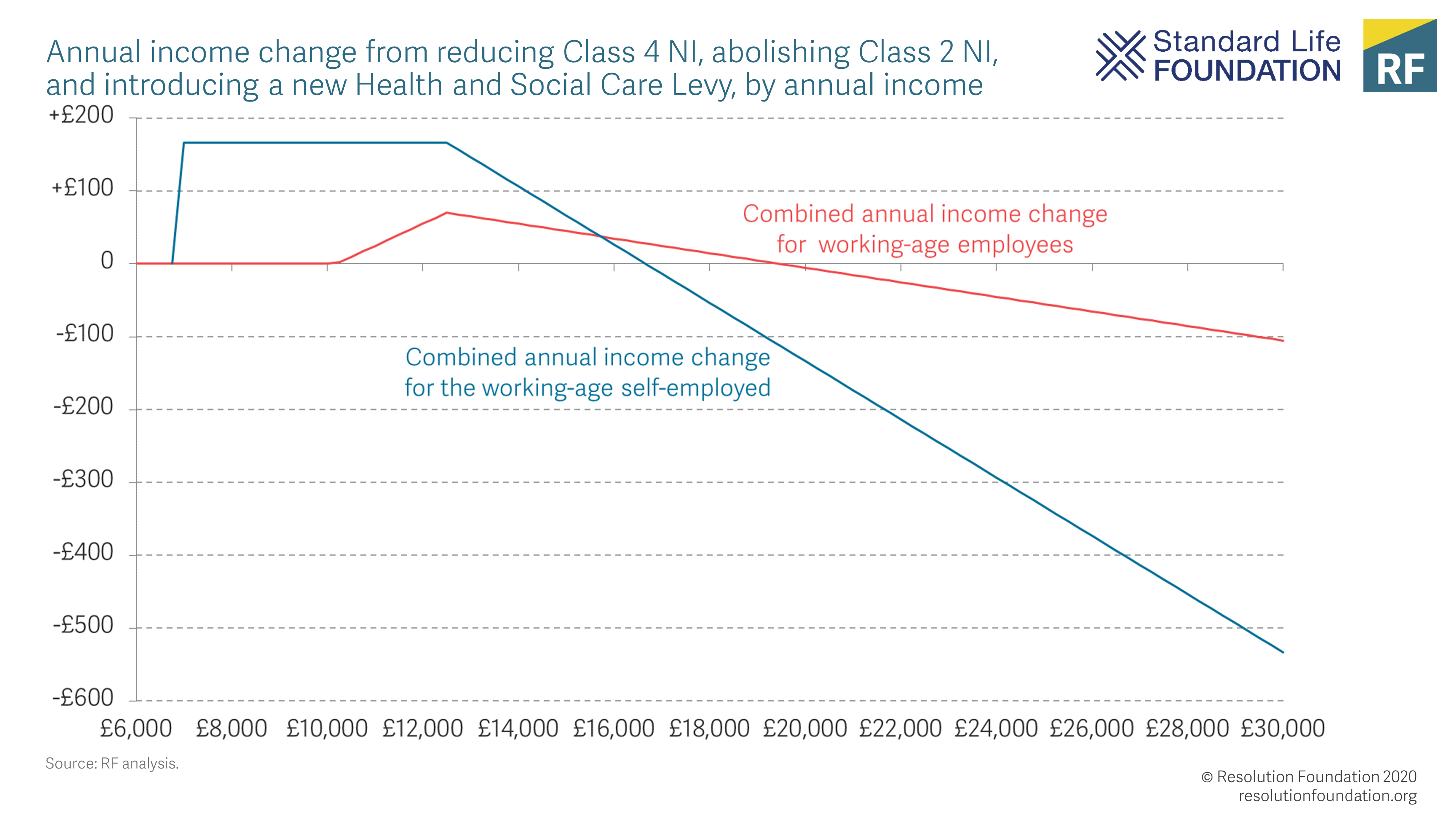 Taxes should certainly not rise now – the overwhelming priority is to support the economy through a difficult winter. But fiscal multi-tasking may mean that taxes need to rise by around £40 billion in the middle of this decade. Such increases would be very challenging, but they have been done before – and by governments of both parties. Whether the requirements of the economic cycle will fit with realities of the political one is, as ever, a separate question.