Taxes are going up, in large part due to big policy choices like the upcoming rise in the Corporation Tax rate and the prolonged freezing of various tax thresholds. Yet it’s always possible that further tax rises will be needed sooner or later, perhaps to support struggling public services, or to raise funds to allow other taxes to be cut (it seems almost certain that the Treasury will not go ahead in the Budget with the entire 12p a litre fuel tax rise that is currently planned, for example).

As taxes rise relative to GDP, it’s all the more important that revenues are raised as efficiently and fairly as possible. But there are still many parts of the tax system where particular groups or forms of activity pay lower tax rates than others, with little justification. Below we look at five of the worst, where it’s hard to argue that value for money is being delivered. As welcome new HMRC stats out today show, closing or tightening these reliefs could raise many billions of pounds a year.

Formerly known as Entrepreneurs’ Relief, this tax break lowers the Capital Gains Tax rate to 10 per cent when your own company is wound up or sold. This was previously subject to a lifetime gains limit of £10 million, which was thankfully reduced to £1 million in 2020; this lowered the cost from £2.7 billion in 2018-19 to a forecast £1.1 billion in 2022-23 (including Investors’ Relief).

But this is still a substantial annual sum. We and others have previously argued that there is little evidence that this tax break has an effect on entrepreneurial activity, and that the prospect of slightly lower taxes at the end of a person’s involvement with a business is not well-targeted in a business’s lifecycle, and is often not even known about. In contrast to the kind of start-up activity that may be envisioned, one frequent use of the relief is for a one-person company to retain earnings in their business and then liquidate the company and therefore classify that cash as a capital gain taxed at 10 per cent (with BAD relief), rather than as dividend income, which could have been taxed at up to 39.35 per cent. In the latest statistics, an estimated 47,000 a year are benefiting from the relief, saving an average of £23,000 each.

In 2016, Entrepreneurs’ Relief was in essence extended to people investing in companies owned by other people. It means that the Capital Gains Tax rate can be slashed to 10 per cent if you’re an angel investor gambling on a tiny start-up, but also – potentially – if you’re simply buying new shares from particular companies trading on the London Stock Exchange’s ‘AIM’ market. Somewhat strangely, the lifetime gains limit for this Investors’ Relief remains £10 million – so ten-times what it now is for BAD relief.

The HMRC statistics are not able to provide a separate costing or claimant count for Investors’ Relief, in part due to confusion about which relief claimants are (or should be) trying to claim. But the estimated cost at the time that the relief was introduced was £60 million a year, and HMRC says it is “only a very small proportion” of the BAD relief figure. Indeed, the Office for Tax Simplification suggested scrapping it on the basis of uninterest: “the OTS has received many responses which refer to Investors’ Relief, from a wide range of people including investor groups, accountants, lawyers and individuals. The message was almost unanimous – almost no-one has shown any interest in this relief or is using it. … The government should abolish Investors’ Relief.”

3 and 4. Agricultural Relief and Business Relief

Exempting agricultural assets from Inheritance Tax costs the Exchequer £400 million a year. But this benefits only around 1,300 estates per year – meaning that the average tax saving is around £280,000 – and, within this, roughly the top fifth (261 in 2015-16) account for a majority (62 per cent) of the tax relief’s cost.

Business Relief is even more expensive, and even more top-heavy. It cost the Exchequer an estimated £800 million in 2022-23 and in previous work we set out how just 51 estates in 2015-16 – those worth over £5 million – accounted for 55 per cent of the relief’s cost.

These reliefs contribute to the fact that the wealthiest estates pay a lower effective rate of Inheritance Tax than less-wealthy ones. At a minimum, we have previously suggested introducing a cap on the value that can be relieved, and restricting the reliefs to genuine cases of family businesses or farms passing from one generation to the next, not simply portfolios of unrelated shares and landholdings that may be sold soon after being inherited.

Another major Inheritance Tax break is the additional tax allowance that can be used when bequeathing a home to direct descendants. This now equals £175,000, or potentially £350,000 for a couple. This policy is – by design – more majoritarian than those above: it was justified as a way to stop Inheritance Tax creeping down to affect households that are not very rich and ensure that more homes can be passed on free of tax. But it is still only of use to a minority of relatively wealthy families: with around 19,000 estates per year – or 3 per cent of deaths – benefiting by an average of around £60,000 each.

It is an awkward tax break. It is only available for direct descendants – so hard luck if you need or want to leave your home to someone else. And there are complicated provisions for downsizing or selling before death, for example, which (in the words of one firm) are “nearly always impossible for a lay taxpayer to understand and calculate without professional advice”. Taxes related to people’s homes may be politically dicey, but there are no doubt more progressive or straightforward ways to cut taxes than this relief.

Those five tax breaks – shown together in Figure 1 – add up to over £4 billion a year. With a combined claimant count of around 70,000 in 2019-20, that represents only around 0.1 per cent of the UK’s population each year, with each benefiting by around £50,000 on average (accounting for the fall in the generosity of BAD relief). As ever, we should be asking exactly what this spending achieves and – crucially – whether that is worth the opportunity cost.

Figure 1: Despite a welcome cut in the generosity of (what is now) Business Asset Disposal relief in 2020, these five reliefs still cost a combined £4 billion a year 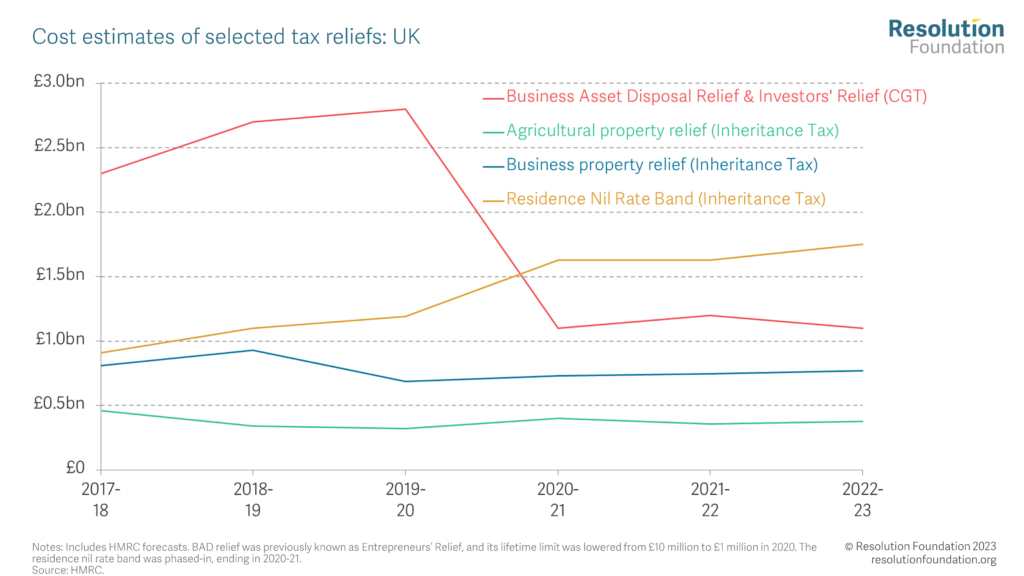 We will be doing further thinking and analysis on these tax reliefs and many more in the first half of this year – so do get in touch if you have views on how (if at all) policy should change.