Well it’s turning into an “anything but Brexit” election. This week’s focused on everything from the NHS to truly awful floods. It’s also raised the single biggest question of the election so far: how on earth has any human being managed to avoid knowing the words to ‘the wheels on the bus’. I don’t know whether to be horrified or jealous.

Today’s latest row, on Labour’s plan to nationalise the broadband bit of BT, is predictably focusing on the dull debate about how much nationalisations cost. But it’s worth reflecting on the other bit of their plan – giving everyone free universal broadband access, paid for by a tax on big tech. This offers a telling insight into our changing attitude to tech. On the one hand, it’s now so important that Labour wants to spend some spare cash on free broadband rather than public services. But on the other, tech companies have managed to make themselves so unpopular that they’re now an easy target for more tax and regulation.

We’ll be discussing this conundrum with two leading tech thinkers and pioneers – Rana Faroohah and Martha Lane-Fox – at RF on Tuesday. Come along – it’s also free and universal.

Marry more, discriminate less. The last few decades have seen huge strides in LGBTQ rights: legalising homosexuality has often been followed by civil partnerships and same-sex marriage – although far from everywhere. These things are hugely important in of themselves. But just to be really romantic for a second, what did the legalisation of same-sex marriage mean for gay and lesbian couples in the labour market? New research says quite a lot. Both partners are more likely to be employed and work full time. Why? The paper suggests it reduced discrimination – raising pay and the incentive to work. So, tolerance is obviously a really good thing, and the homophobes still out there should know that there is now additional economic justification for same sex marriage.

Forgetting (some of) Keynes. Have a read of this summary (FT but FREE) of a fascinating new paper by George Akerlof. It’s a great bit of reflection from the Nobel Prize winner on why macroeconomists in the second half of the 20th Century ended up embracing Keynes on the need to stabilise demand in an economy during a downturn, but forgot Keynes’ wider argument that we base our decisions on what we expect others to do – which can clearly breed instability. Obviously that’s of relevance to why macro models were not in a good place to understand the financial crisis of 2008. But it’s also a fascinating read more generally on how paradigms get established and changed.

Proper patronage. This is odd. We all hopefully think that awarding jobs to your mates isn’t a great idea. But is patronage ever a good idea? Surprising research (summary) says yes. Examining the battle performance of the British Royal Navy officers during the heyday of sail (think Nelson) it finds that officers with links to top naval commanders performed far better in battle compared to those without a family connection. Your average British captain in 1690-1850 typically sank or captured 0.8 ships a year – but that rose to 1.3 ships for those with family connections. The authors argue this is because the higher up naval types used extra information they have on their kin to pick the good ones. Maybe, but before you all run off and appoint your kids/friends to jobs, just remember – you don’t actually sail warships do you…

Birth order and delinquency. Our research shows that in the UK, child benefit for a second child or beyond is worth less now than when it was fully introduced in 1979. But it’s not just the British state making it harder for those kids not born first. According to new research looking at Denmark and Florida, the ordering in which we’re born matters a lot. For families with two or more children, second-born boys are 20 to 40 per cent more likely to be disciplined in school and get in trouble with the police than their first-born brothers, who get more parental attention. As the first born (admittedly of twins) I fully endorse this message.

Right wing insecurity. Economic insecurity is important. We do a lot of work on the insecure work side of things, but its wider impacts are under researched. So it’s good to see new work asking whether economic insecurity affects the way in which people vote. Two slightly surprising results. First, economic insecurity encourages political activism – ie voting. Second, it makes us more likely to vote for right wing parties (including the Conservatives in the UK).

Tax is set to be a big election battleground. As we said earlier this week, the gap between the main parties’ tax plans could be close to £60bn – the biggest in a generation. Labour wants tax up on high earners. The Conservatives, meanwhile, say that will put the rich off hard graft, and that instead we should all pay less National Insurance. When it comes to the highest tax rates, both are rather missing the point, as this week’s Chart shows. Yes, if you look just at taxes then the rich do pay a higher marginal rate of tax. But once we add in the effect of 63p of benefits being taken away for every extra pound you earn, it’s some low-income families that face the very highest marginal deduction rates. So, if you’re really worried about discouraging hard graft, maybe spend a little less time citing the Laffer curve, and more time reforming Universal Credit.

Rather neatly, this brings us to the final part of the RF Trilogy on the size and shape of the state. Part III – social security – is coming up on 26 November. Sign up here (and here’s Parts I and II so you’ve got the whole boxset). 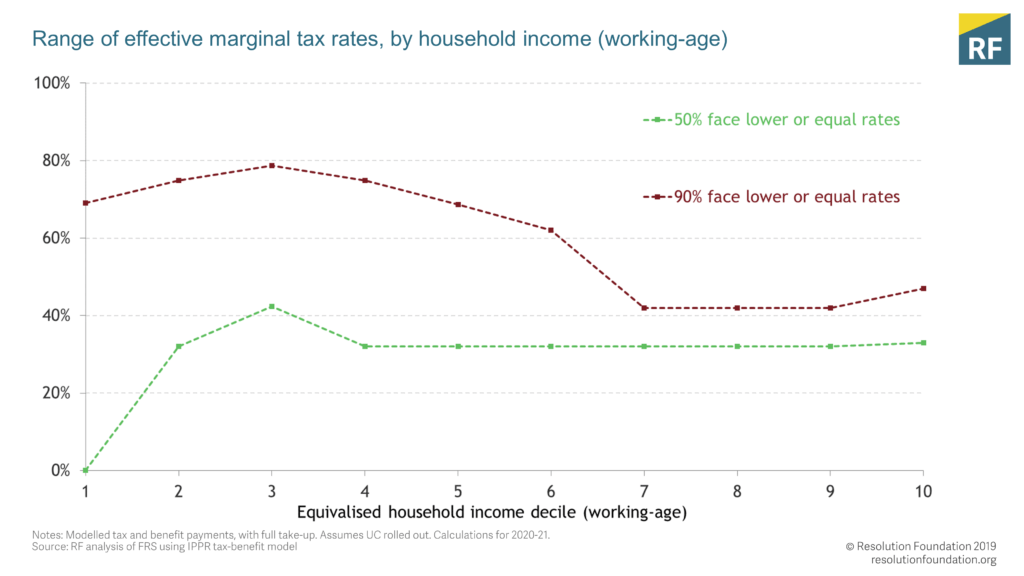