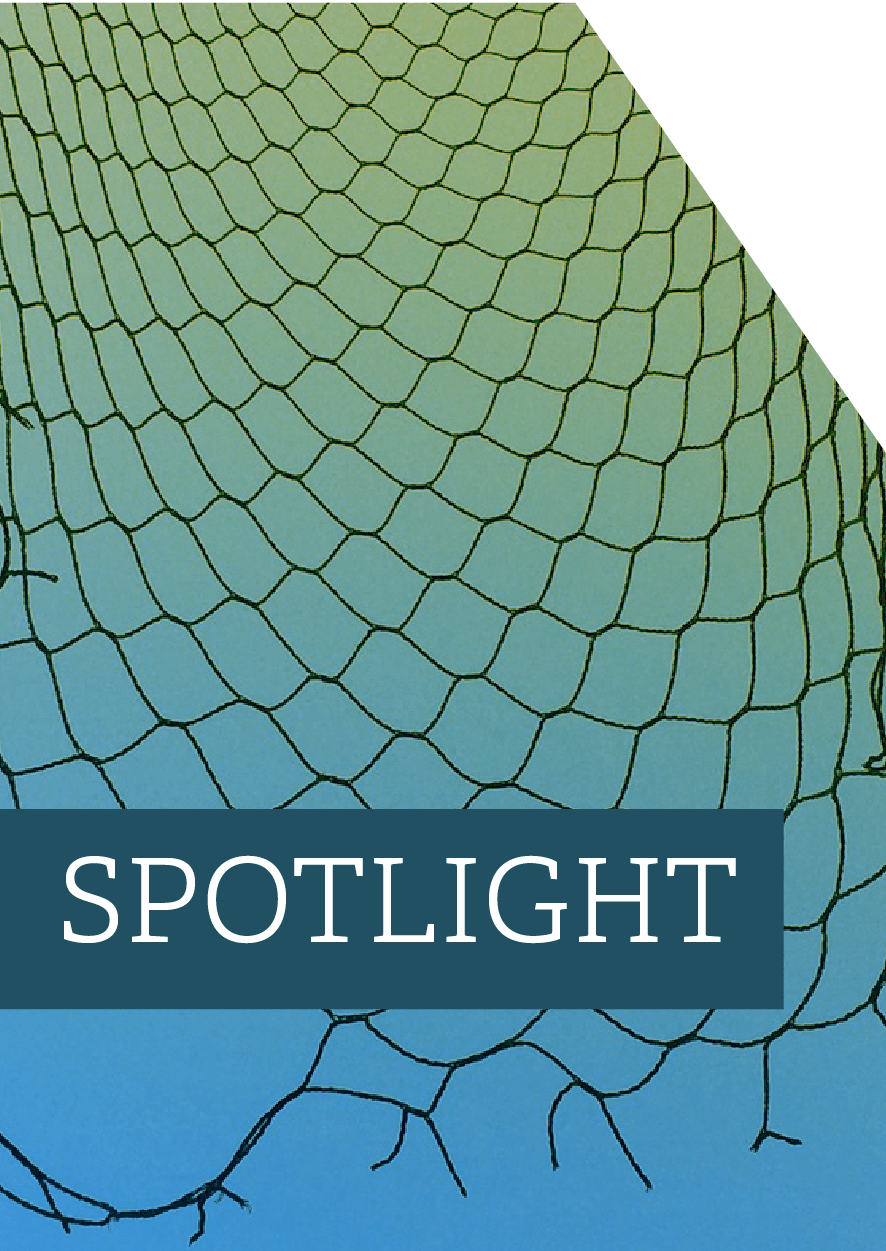 The major working-age benefits will rise in cash terms in April 2020, for the first time in five years. They will increase by 1.7 per cent, based on new figures released today – assuming no change in government policy. But while the benefit freeze has now ended, its effect of significantly weakening the social security safety net has not.

Further data, also released this week, means that the state pension will rise by a higher 3.9 per cent. The difference between the two increases highlights the fact that working-age benefits will continue to be eroded in value relative to earnings and pensions. This policy approach comes despite households with children typically having lower incomes than other groups, and higher poverty risks.

The ‘benefit freeze’ is over

We now know that CPI inflation was 1.7 per cent in the year to September. This figure is particularly important as it determines (among other things) how far many benefits will rise next April.

Remarkably, for a range of benefits – including Child Benefit, Universal Credit, (non-disability) Tax Credits, Housing Benefit limits, Jobseeker’s Allowance, Income Support, and Employment and Support Allowance (except the support group component) – this will be the first cash increase in basic entitlements since April 2015, thanks to the benefit freeze introduced by then Chancellor George Osborne.

After adjusting for price increases, this benefit freeze has cut the real level of those benefits by 6 per cent, and in many cases that has come on top of earlier real cuts.

It is of course a good thing that the freeze is coming to an end. (Though, to be clear, the freeze was always due to come an end in April 2020 – there has not been any recent policy change.)

But, while the direction of travel is no longer downwards, working-age benefits are clearly now stingier than they were pre-freeze, or indeed pre-austerity (even putting aside any wider considerations, such as sanctions or waiting periods). In fact, the real value of basic out-of-work support in 2019-20 is – at £73 a week (£3,800 a year) – lower than it was in 1991-92, despite GDP per capita having grown by more than 50 per cent since then. Even more starkly, child benefit for a second child or beyond is worth less in 2019-20 than when it was (fully) introduced in 1979. It seems a rising tide does not always lift all boats. 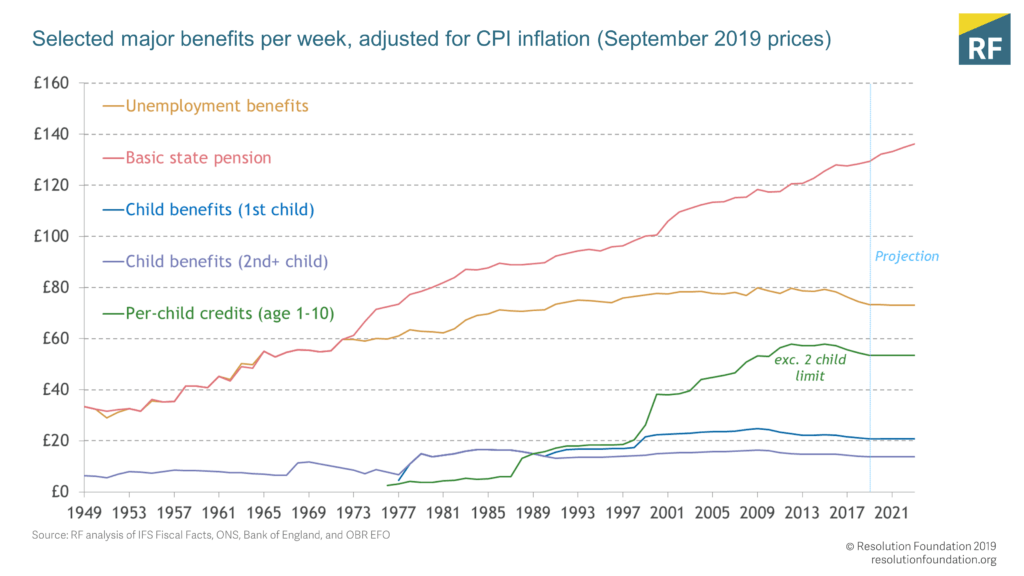 We can also compare benefit levels to average earnings. This is a better reflection of society’s ability to afford those benefits, and of the degree to which they support households to live a minimum acceptable standard of living that reflects social norms at the time, with no-one being left too far behind. For similar reasons, the UK has sensibly pegged its wage floor to median earnings and pegged the state pension to (at least) average earnings. New Zealand now uprates all its benefits in line with earnings. And the UK’s Office for Budget Responsibility assumes uprating by earnings in its long-term forecasts, “which ensures that living standards for recipients are maintained relative to the rest of the population.”

Relative to earnings, unemployment support has fallen to a record low of 14 per cent, down from 27 per cent at the emergence of the Beveridge system. Although this level will fall slower now that the benefit freeze is over, the fall is expected to continue with earnings rising faster than prices (and therefore benefits). Similarly, compared to average earnings, child benefit for a second child is now (at 2.7 per cent) less than half as generous as it was in 1979-80 or 1946-47 (5.9 per cent), and still falling. 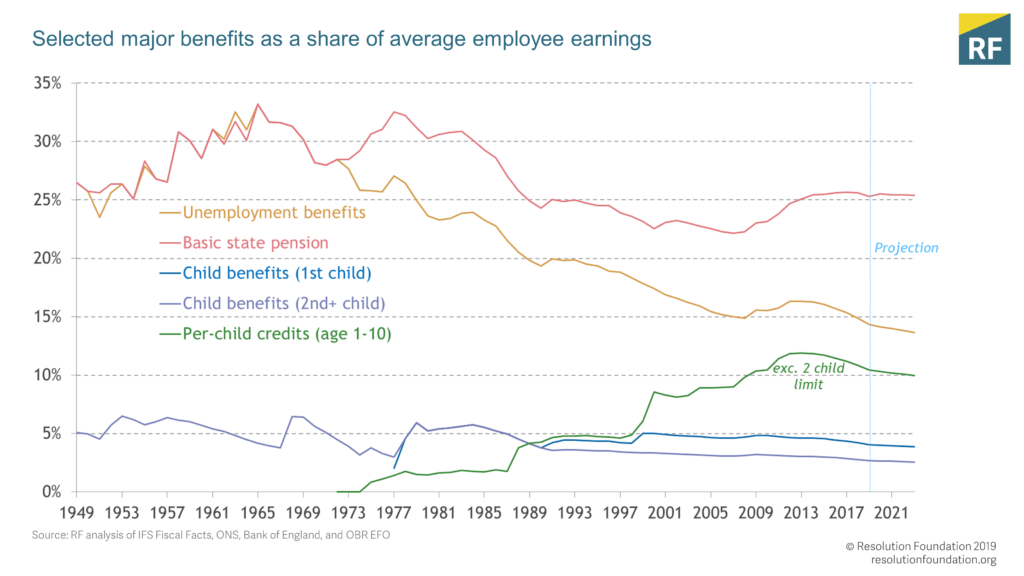 It has also been many years since the UK ‘gave a pay rise’ to carers (through Carer’s Allowance) or new parents (e.g. through Statutory Maternity or Paternity Pay). There is some partial justification for this, given how disastrous the last decade as a whole has been for pay growth. But the stagnation in these benefits should now be ended.

With the end of the benefit freeze, housing benefit caps (local housing allowances) will rise by the minimum of either CPI inflation or changes in the relevant local market rents. So, although overall private rent inflation has recently averaged a relatively low 1.3 per cent, in any local market where rents are growing faster than 1.7 per cent, the proportion of private rents coverable by housing benefit will continue to fall. Although there is an argument that housing benefit restraint may put some downward pressure on rents, while increasing poverty, it is not at all clear that CPI-uprating – bearing little relation to changes in local rents – makes sense. It’s a blunt instrument for reducing housing benefit expenditure that may have undesirable effects in the long run.

The fact that earnings and state pensions are rising by 3.9 per cent throws the treatment of working-age benefits into starker relief. After all, the UK’s poverty problem is in large part about how little the tax and benefit system supports children and parents, as Figure 3 shows. Children are almost twice as likely as pensioners to be living in poverty, and these figures are from before the full impact of the benefit freeze and other benefit cuts.

Figure 3                  22 per cent of the population live below the relative poverty line, but rates are particularly high for children, parents and/or single people 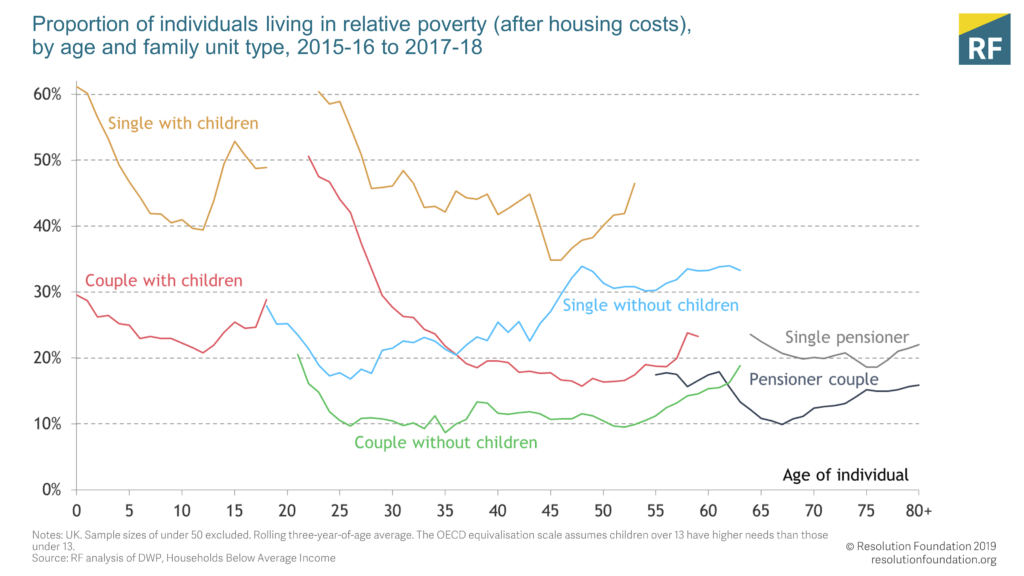 Although the benefit freeze and departmental austerity are ending, this is not the end of working-age welfare cuts

The question of whether we could and should do more to support household incomes through working-age benefits (the answer to both is yes) seems particularly pertinent when the age of austerity has come to an end for departmental spending, and when the likely upcoming election may feature some very expensive promises on other spending and tax cuts.

But despite the end of the benefit freeze, the turning point for departments, and the abandoning of previous fiscal rules, we shouldn’t forget that some benefit cuts continue to be rolled out. As Figure 4 shows, the two-child limit in particular has some way to go, as it applies only to those born after April 2017. The slow roll-out of Universal Credit, although a positive overall, will also create many losers as it continues over the next few years. When it comes to working-age benefits, it is clear that austerity is not yet over. 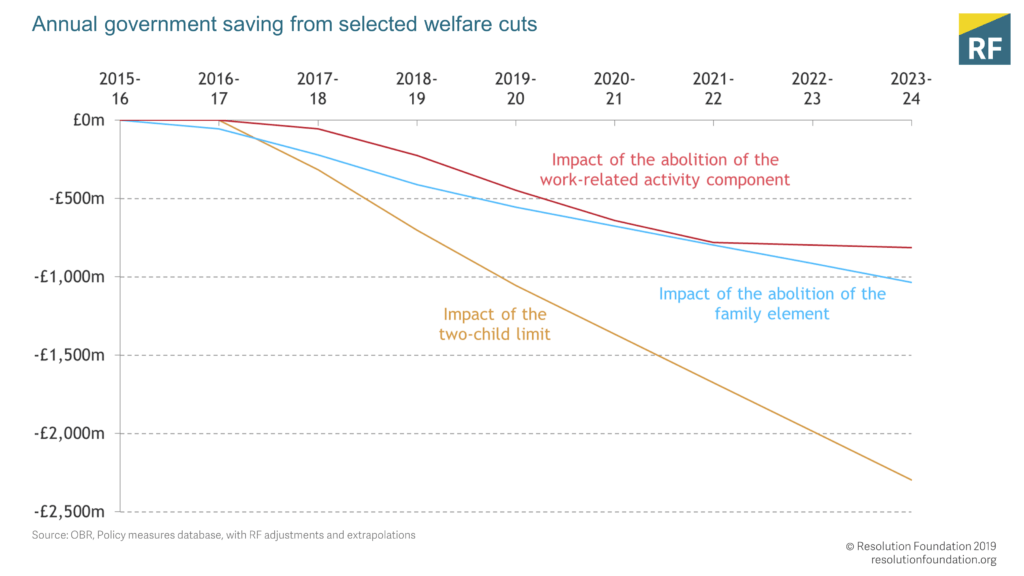 Of course, an election may soon change some of this outlook. Labour and the Liberal Democrats have outlined some very welcome promises to reverse cuts. They may, however, suffer from shifting baseline syndrome, in that their proposals might still be less generous than the system that existed before George Osborne’s 2015 package of cuts.

The government too may simply choose to uprate April’s benefits by more than inflation, perhaps with one eye on an upcoming election and/or delivering a post-Brexit boost to living standards.

Alternatively, the government might be forced to act by a recession. Whatever the cause of that recession, benefit increases would likely need to be an important part of the response, both to support families against price rises and/or unemployment, and to help provide a rapid stimulus.

Although benefit uprating can be a technical issue, society’s choices about benefit levels help determine levels of inequality, pensioner poverty, child poverty, how much of a financial struggle low income parents face, living standards for the severely disabled and carers, and the risk of destitution for those out of work. The benefit freeze is over, but – unless and until policy changes – its impacts are now here to stay, and benefit erosion continues.

[1] The figure used is annual growth in average weekly earnings (including bonuses), in the three months to July, as published in October.