Across the country today hundreds of thousands of twenty and thirtysomethings are heading back to their parents’ homes for Christmas. Most (around two-thirds) of these parents are home owners, but the same cannot be said for their kids.

Home ownership rates have fallen across all age groups in the UK in recent decades, with the most pronounced fall for young people. In the late 1980s half of young families (by which we mean a single adult or couple headed up by someone aged 25-34, along with any dependent children) owned their own home. By 2016 this share had collapsed to just one-in-four.

This – coupled with the high share of income that all families are now having to allocate to day-to-day spending on housing – is what a housing crisis looks like.

But the latest data brings news of Christmas cheer: it confirms that young families’ home ownership rates are continuing their first sustained rise in 30 years. Since 2016 they’ve risen from 25 per cent to 28 per cent. This increase, and the recent change for other age groups, is shown in Figure 1 below. 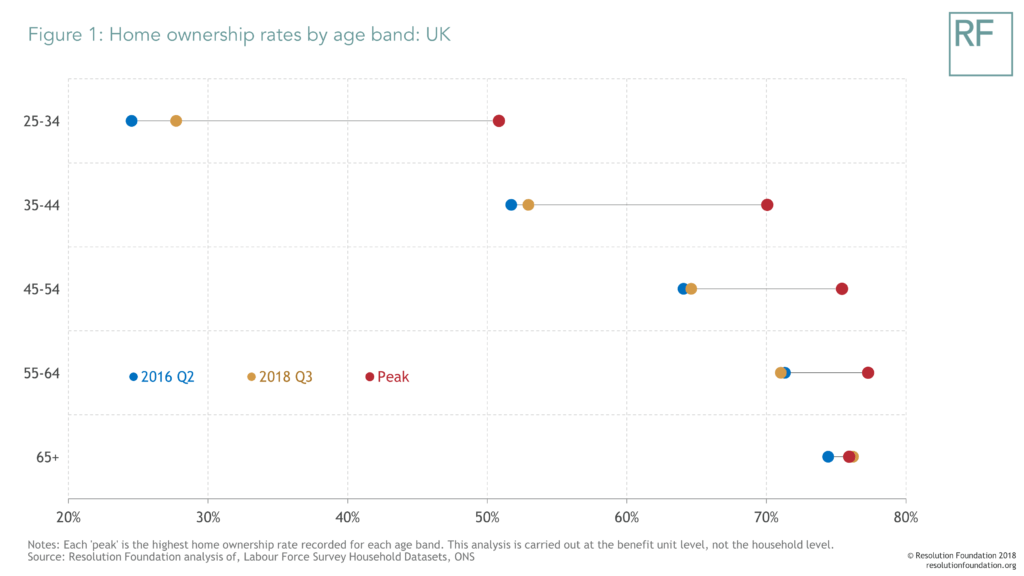 Tthis may be a small change when put in the context of the long-run decline. But it means that 190,000 more young families will have a home of their own this Christmas than would have done if the 25-34 year old home ownership rate had remained unchanged since early 2016. This is definitely welcome news.

Why has it happened? Three reasons stand out. First, credit conditions for first-time buyers have been improving. The median loan-to-value ratio on new mortgages for first time buyers was at 90 per cent throughout much of the 2000s, before plummeting to a post-crisis low of 75 per cent in 2009. Since then it’s been rising steadily, hitting 85 per cent in 2016 and remaining at or near this level for the past two years. Beyond the deposit barrier, a move from lenders towards offering longer mortgage terms may have helped those first time buyers for whom the monthly cost of maintaining a mortgage might have otherwise prevented the move into ownership.

Second, the period of rapid house price growth has come to an end over the past two years. Average house price growth peaked at 9.4 per cent in late 2014, and this had slowed to 3 per cent by mid-2018. At the same time the growth rate of nominal pay has been increasing, albeit very slowly. The UK’s Gladiator-style house price travellator is a bit more surmountable than it was just a few years ago.

Third, the introduction of the three per cent stamp duty surcharge on additional properties coupled with stamp duty relief for first-time buyers will have helped to rebalance housing demand towards young families. This is welcome and – as we outlined in our Intergenerational Commission – there’s certainly more that can be done to tilt the tax system further in this direction.

However, even though things have been on the up recently, we shouldn’t crack out the eggnog just yet. Not to turn into Scrooge, but here are four things to consider that might just temper our Christmas cheer.

First, the tick-up in home ownership hasn’t happened everywhere. As shown in Figure 2, in the North East, East of England and the East Midlands home ownership rates for young families have continued to fall (although at a slower rate than in the first half of the decade).[1] 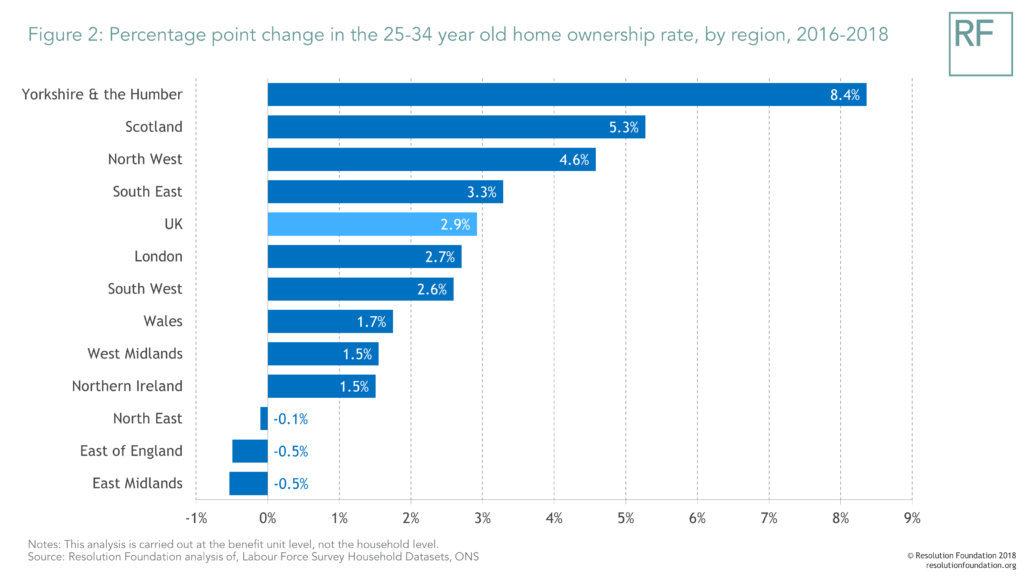 Second, the fundamentals that led to low home ownership rates for young families are still very much with us. There’s no sign that historically low interest rates, which have supported high house price to income ratios, are going to become a thing of the past. For this reason, we shouldn’t be surprised if what’s actually happening here is not the start of a new normal of rising home ownership. Instead, it’s likely that the cohort for whom the crisis caused a delay in their ability to become owners (both because of falling living standards and tighter credit) are finally managing to surmount the deposit barrier.

Third, there’s still a long way to go. Even though the worst may be behind us it’s still the case that home ownership rates are still a long way shy of their peak for young people. The scale of lost ground is such that 1.4 million more young families would be home owners today if the share of this group in home ownership hadn’t fallen since the late 1980s peak.

Fourth, although young families’ ownership rate is at 28 per cent nationally, our new analysis of home ownership at small geographical areas reveals that in some parts of the country – particularly in cities – ownership rates are much lower than this.

Obviously, London stands out; just 17 per cent of young families are owners here compared to 28 per cent across the country as a whole. But, the capital isn’t as much of an outlier as you might think. Other large cities – many of the places where young people are keenest to live – such as Southampton, Birmingham, Liverpool and Manchester, have similarly low home ownership rates of between 16 and 19 per cent. Table 1 shows the areas with the highest and lowest home ownership rates outside London. 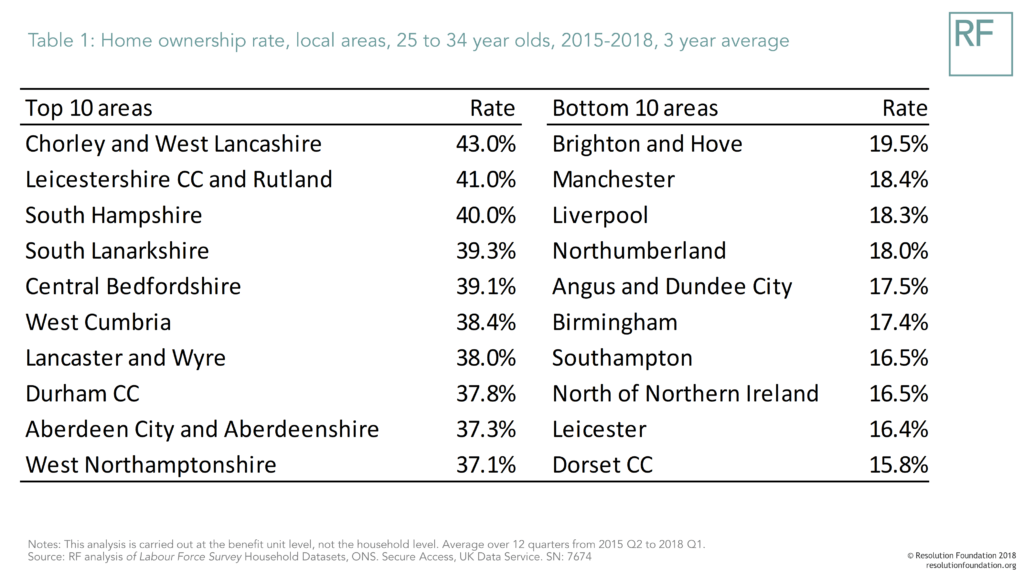 As can also be seen in Table 1, a wider mix of places have higher rates of home ownership for young families. These areas are a mix of low earning/higher affordability areas further from the South East and high earning/middling affordability areas (where average prices are at least a third lower than those in the capital) within commuting distance to London.

The flip-side of low home ownership rates is a higher incidence of private renting. At the national level, the share of young families living in the private rented sector (PRS) has increased from just 9 per cent in the late 1980s to 34 per cent today. The UK government’s policy response to this ballooning of the PRS still leaves a lot to be desired. Despite welcome moves to scrap letting fees and cap deposits, it’s still the case that renters get a raw deal in the UK. The millions of families renting in the PRS deserve longer tenancies and rental stability.

Beyond the high level changes, it’s also worth zooming in on the increase in sharing in the PRS. Twelve per cent of all young families are now sharing with others in the PRS, an increase from just three per cent in the late 1980s. This is most likely not in ‘Friends’ style palatial apartments – but in relatively small houses of multiple occupancy.

In Table 2 we set out the local area differences in the proportion of young people sharing in the PRS. In order to see a clear picture of the picture outside the capital (where, for example, half of young families living in Westminster and Wandsworth are sharing in the PRS) we also remove London’s boroughs from this table. 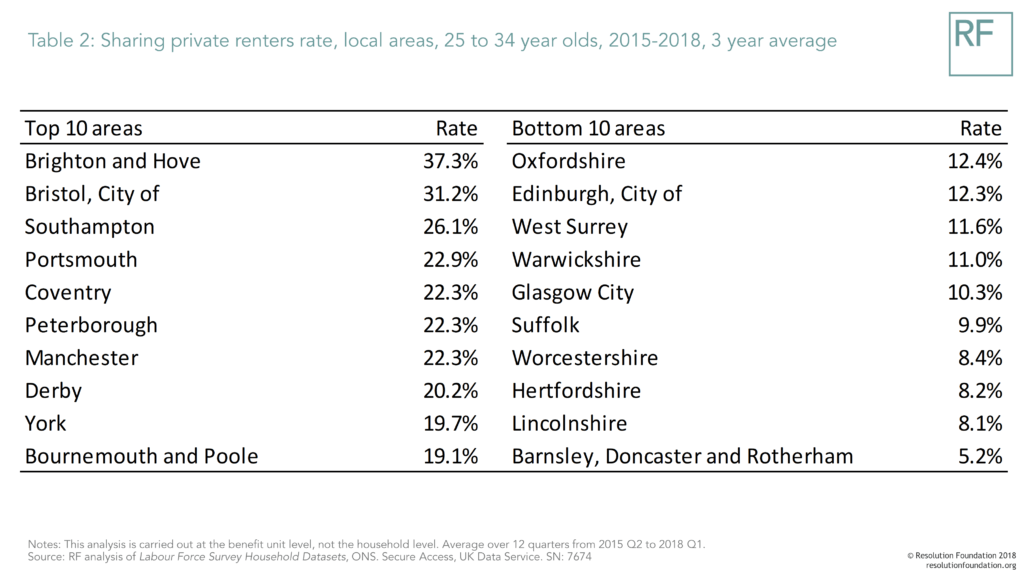 This analysis reveals that almost four-in-ten young families in Brighton and Hove live in shared accommodation in the PRS. Other southern cities dominate this list. In contrast, rates of sharing in the PRS are lower in rural areas as well as within Glasgow (a city with a large social rented sector) and Edinburgh (a city with a high share of non-sharing private renters).

Beyond the early Christmas present of rising home ownership rates for some young families, these local statistics also reveal that housing tenure varies enormously across the country. And it’s not just young families in London for whom owning is a real minority sport either – other cities and areas are also clearly facing the same home ownership crisis as the capital.

[1] Young families’ home ownership rates have risen fastest in Yorkshire and the Humber but we shouldn’t read too much into this – the rise here is more a product of a rebound from a larger than average recent fall than a sign that property ownership is surging in this part of the country.