The good news is we’ve now managed a recession free decade since the financial crisis. The bad news is that history teaches us this is quite unusual – booms and bust haven’t been abolished.

This matters – downturns have very high costs, even when they’re not of the global financial crisis earth-shattering sort. On average they knock four per cent off the size of our economy and push unemployment up by one million. Those job losses tend to be worse for lower income families. How policy makers respond is key – without interventions during the financial crisis to stop a recession becoming a depression GDP could have been 12 per cent lower. That’s £8,000 per household. 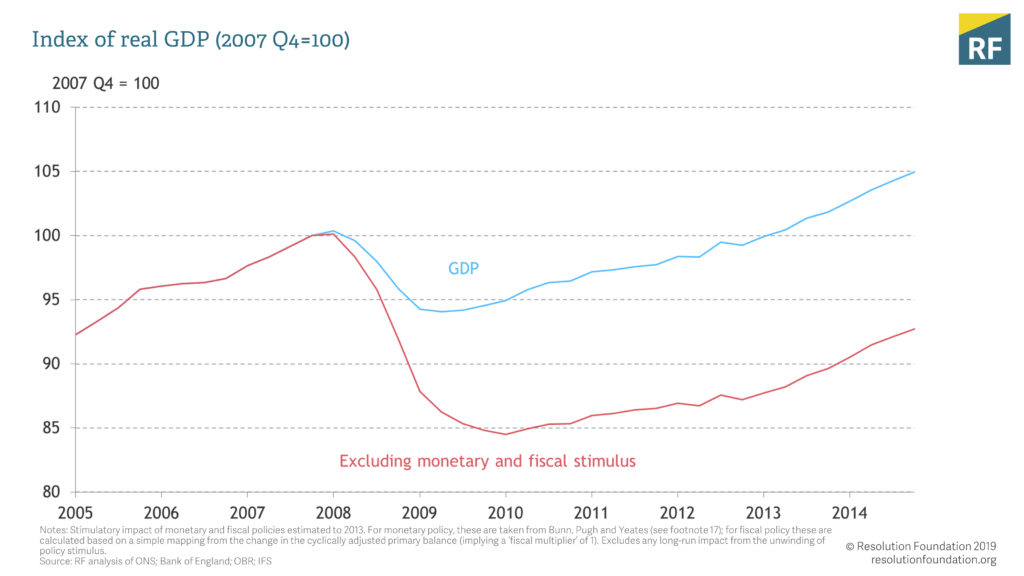 Who knows when the next recession will turn up, but the British public definitely think something’s afoot – google searches for the term have shot up in recent months. And the Resolution Foundation recession risk indicator is at its highest since the financial crisis – as a global growth slowdown combines with Brexit uncertainty here at home. 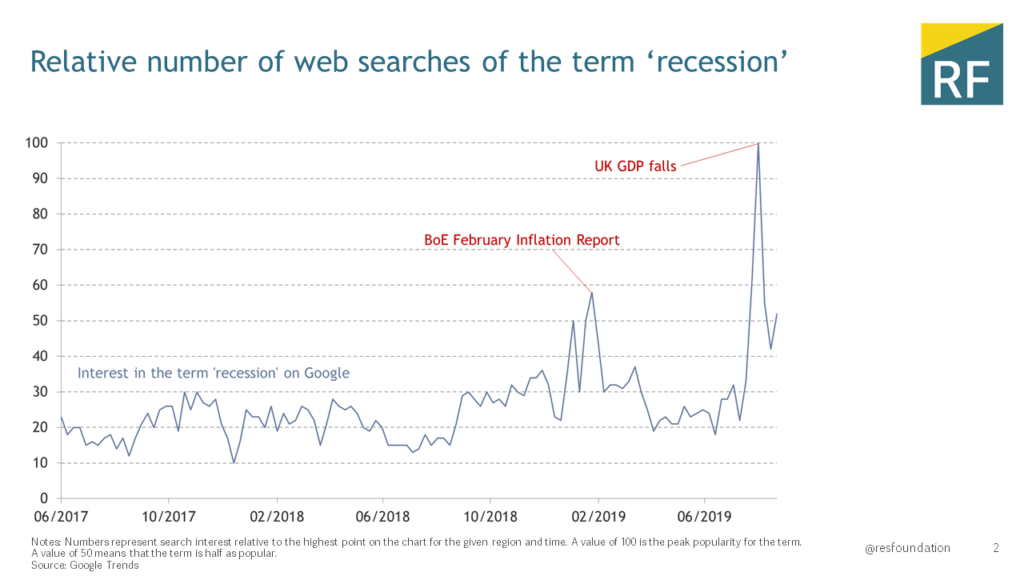 Whenever it turns up the key question is are we recession ready? No is the short version. Before the financial crisis our approach to handling recessions was straightforward – the Bank of England’s job was to cut interest rates to support the economy, encouraging households and businesses to keep spending. In contrast, the Treasury’s main macroeconomic job was to avoid government borrowing getting out of hand during good time and bad.

The financial crisis complicated things – the Bank of England slashed short term rates to almost zero before being confronted with the problem that the economy needed more support, but interest rates couldn’t go any lower (negative rates aren’t straightforward given we can all just hold cash to avoid our savings shrinking in the bank). The answer was quantitative easing (QE) – creating money to buy up government bonds, pushing down longer term interest rates. This helped shore up the economy – although not without controversy. The government also stepped in with tax cuts and extra spending, but two-thirds of the economic stimulus came from the Bank of England.

In a future downturn the Bank of England will again cut interest rates and restart QE – but to much less effect. Interest rates stand at 0.75 per cent and markets don’t expect them increase in the years ahead, so we’re set for a one per cent cut at best vs an average five per cent in past recessions. QE will also be constrained – long term interest rates have fallen again recently and are approaching zero. The result? Rate cuts and QE risk only being able to deliver one quarter of the stimulus our economy would need in an average recession. 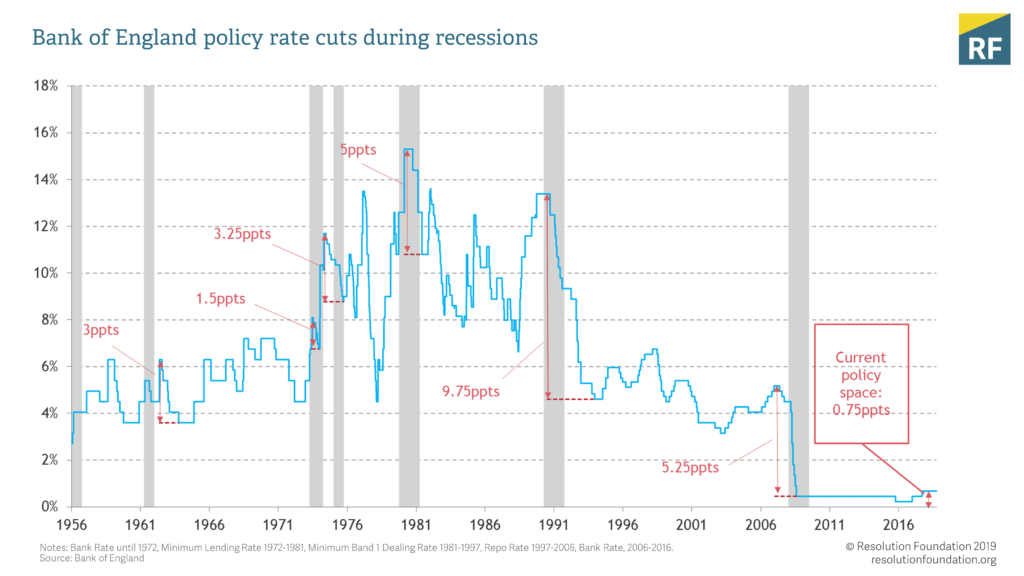 Fundamentally what has happened is that the world has entered a world of much lower interest rates than anyone expected, and our recession fighting tools have not kept pace with that change. If that’s the problem what’s the answer?

Policy makers being clear the problem exists would be a good start. That isn’t easy for the Bank of England in particular, but it’s essential because this isn’t one of those problems that the public is going to push politicians to sort out – at least not until it’s too late.

Second, we can follow the example of other countries that are reviewing the recession fighting tools their central banks have. But there’s only so much difference tweaks to the status quo can make, so any review in the UK needs to look at raising our inflation target to help prevent interest rates getting stuck at zero so often. The current two per cent made sense in the 1990s, but is hard to argue for today.

Third, the government needs to rewrite its approach to the public finances to spell out that come the next recession the Treasury, as much as the Bank of England, will be doing the heavy lifting. Once that principle is put at the centre of policy, other changes flow from it. For instance the UK’s ‘automatic stabilisers’ – tax and benefit rules that cushion household income shocks during an economic downturn – have been weakened since the last downturn, when a low interest environment means they should have been strengthened. And if you’re going to need to spend more to support the economy in the bad times we need to recognise that means spending less in the good times. The good news is we’re starting from not just low borrowing but low borrowing costs. 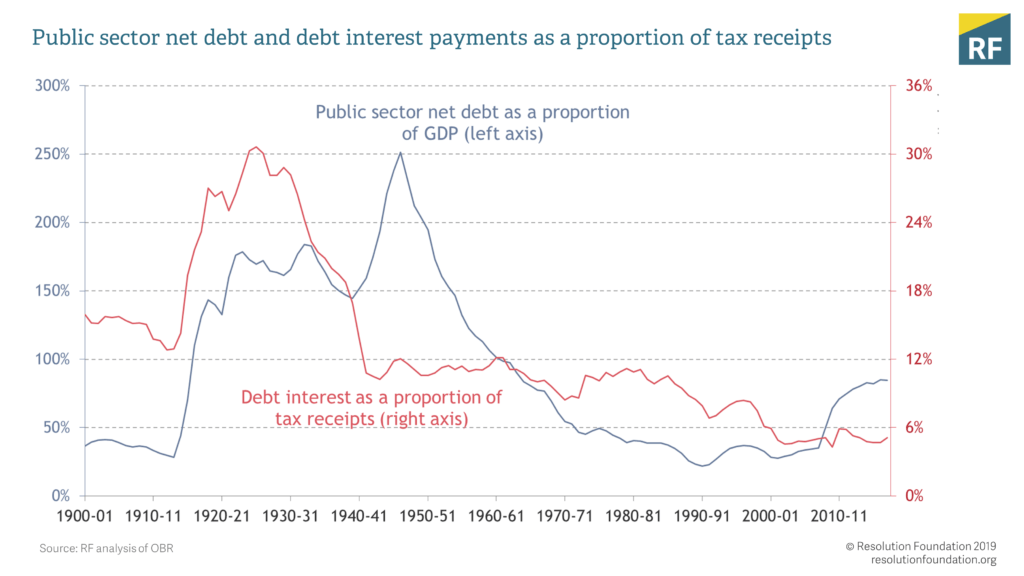 Brexit and elections are top of the agenda for the coming months, but if a lack of action to prepare for the next downturn leaves the UK’s families and firms paying the price in the years ahead we’ll all deserve a share of the blame – whether we voted leave or remain.

This article was originally published for The Times Red Box