You wait for a minimum wage report and then three come along at once. This morning the Treasury published Arin Dube’s keenly awaited review of minimum wage policy in the UK. Dube backs the Chancellor’s ambitions to raise the rate to two-thirds of median hourly pay, but offers useful honesty about the risks involved, as well as practical advice about how to achieve the ambition. Then the Low Pay Commission (LPC) got in on the act, publishing their review of the youth rates, and its own view of where to take the adult rate after next year. They are supportive of higher ambitions but offer a cautious tone, and want to retain the power to change policy in response to economic conditions.

Here are some key points we picked out from these reports.

Today’s publishing frenzy means we can now see the evidence that was available to the Chancellor when he made the commitment to push up the 25+ rate of the National Living Wage to £10.50, and to extend this rate to 21-24 year olds. Unsurprisingly, on the key question of ‘how high’, Arin Dube’s report is supportive of the government’s ambition to increase the adult rate to two-thirds of median hourly pay.

The language used isn’t quite as forthright as the Chancellor might have liked. Dube says there is ‘room to explore’ a minimum wage ‘in the range of 60 per cent [the 2020 position] to two-thirds of hourly earnings’. And he has caveats about how to get there, including making improvements to the evidence base. But this will be taken as a green light for the Chancellor’s plans.

Two-thirds of median hourly pay was the target was first mooted by the previous Chancellor, Philip Hammond. And while there is no special economic significance to this level, it is a commonly-used definition of ‘low pay’. Setting the minimum wage at this level would therefore end low pay, apart from for younger workers being paid the lower age-related minimum wage rates.

It is worth emphasizing how big a transformation in the country’s low pay landscape this would represent. Since 2011, the Resolution Foundation has published an annual report called Low Pay Britain, where we chart the number of people in low pay. This was a statistic that never seemed to change, hovering at just above 20 per cent of all employees. Since the higher National Living Wage was introduced in 2016, this number has fallen dramatically, standing at 16.2 per cent in 2019. 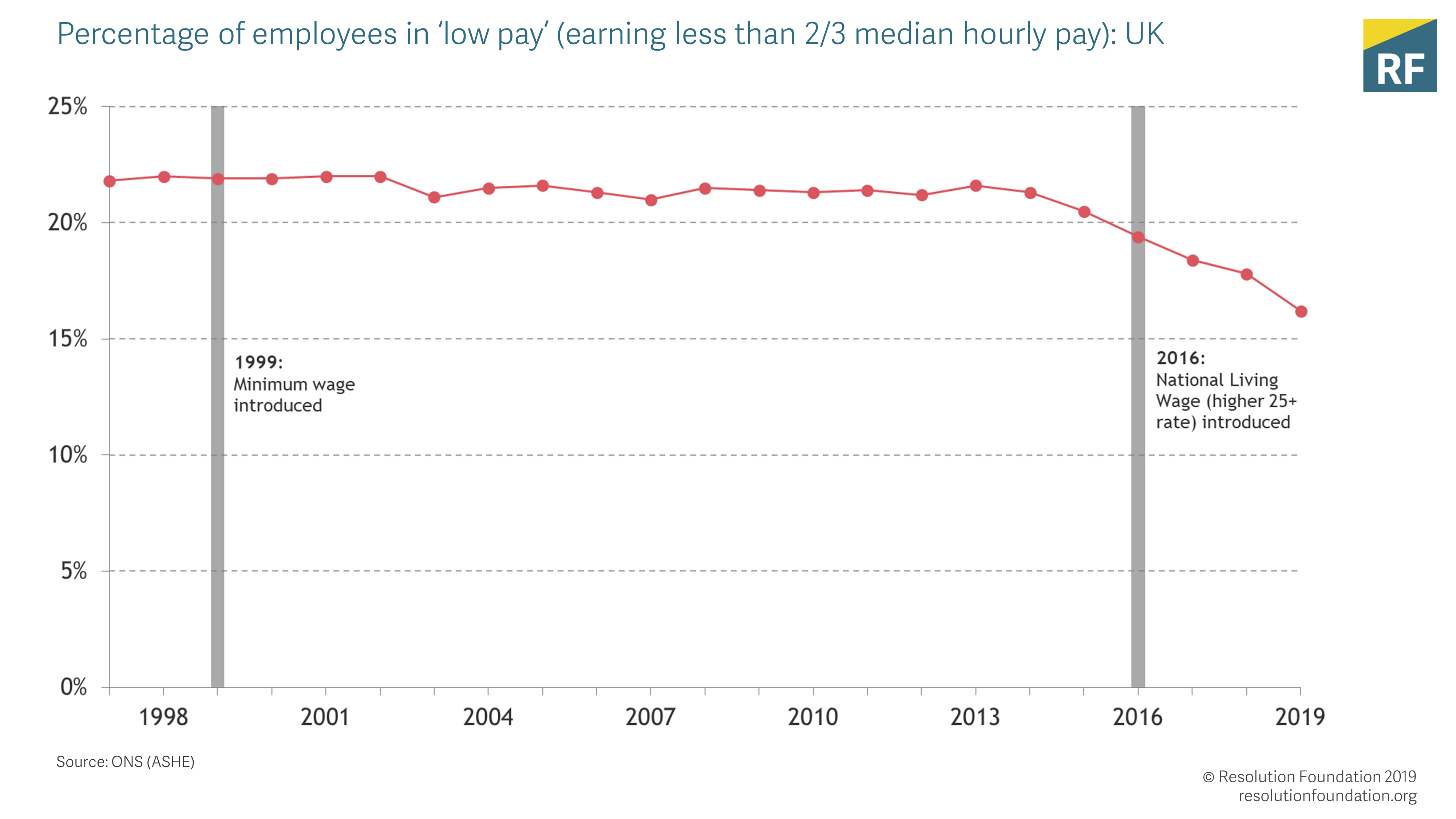 How to get there

Crucially, Dube’s review has a lot of practical advice about how to get there. We argued earlier this year that the pace of increases matter – and that we should move slowly enough that any ‘overshoots’ can be corrected as quickly as possible by holding the rate constant in cash terms and letting inflation and earnings growth catch back up. As Tim Harford pointed out in a recent column, it’s not just the immediate effect on jobs we should worry about. Spend too long in ‘too high’ territory and employers may make adjustments to production processes, meaning workers are not easily rehired as the wage level comes down.

To deal with this risk, Dube recommends that increases in the minimum wage should not ‘dramatically’ exceed overall wage growth. We have suggested that a pace below twice nominal earnings growth would be reasonable.

Interestingly, Dube also raises the risk of moving too slowly. Namely – small increases mean it’s harder to pin resultant changes in employment or hours to the minimum wage. To overcome this he thinks we should make more use of bigger studies, which try to measure effects across multiple years.

One of the areas not covered by Arin Dube’s review is the different rates used for younger people. This is important, because the Chancellor’s policy is not just to raise the 25+ rate, but to extend it to those aged 21+. This is where the other reports published today come in. The LPC reviewed the evidence relating to extending the NLW to younger workers, finding a ‘strong’ case for doing so, though they suggest extending to over-23s first, and then taking stock.

Their main rationale for this approach is that workers age 23-24 are not very different to workers a bit older – in terms of their employment rates, the kind of work they do, and the wages they tend to earn. Indeed, only a small minority (6 per cent) of 21-24 year olds are paid at the 21-24 rate, and a further minority (8 per cent) are paid between the 21-24 rate and the 25+ rate. For the 23-34 age group these figures will be smaller still. Therefore the LPC find little basis for treating them differently in the minimum wage system. There are greater differences, though, observed among 21-22 year olds, who are more likely to still be in education, and earn less.

The observed similarity of the 23-24 age group and those a bit older is supplemented by studies which have failed to find negative employment effects of raising the youth rates or of extending rates to younger workers (including when the age at which people qualify for the main adult rate was lowered from 22 to 21 in 2010). A specific concern with youth rates has been that setting the rate too high would encourage young people to leave education earlier. A new report on that question finds no evidence of this happening.

Minimum wage setting is a balancing act, with higher pay to be weighed against the effect on jobs. Until recently the country was happy to leave this to the experts (the Low Pay Commission), who reviewed the evidence and set the rates. Day to day minimum wage setting was largely politics-free.

That was until 2016, when George Osborne intervened to push up the rate for over-24s. We were supportive of this move – in fact the Chancellor cited our 2014 review of the minimum wage to the House when announcing the policy. We argued that it was time for greater ambition, and we explicitly recommended the 60 per cent of median hourly pay target that was adopted by Osborne. So far, the evidence suggests this intervention worked – studies have not found negative employment effects resulting from the 2016-onwards uprating. This implies that progress may have been overly cautious beforehand, and highlights the positive aspect of bringing politics into minimum wage setting.

However, politics also brings risks. It wasn’t always the case, but politicians today are likely to want to see a higher minimum wage. This pressure increases the importance of having a framework that gives a central role to quality evidence, and that gives the Low Pay Commission the ability to use it. The LPC’s report sounds a warning note – they argue that the credibility of the minimum wage rests on their having the independence and discretion to depart from government policy if needed.