Today we got the best data yet on the state of Britain’s household finances going into the present crisis, and – given that the impact of this shutdown and recession will be unequally felt – it was important that we also got more information on how particular groups were faring. Neither perspective is reassuring.

The Department for Work and Pensions (DWP)’s new, detailed household income survey data for 2018-19 (April 2018 to March 2019) shows – as expected – that it was a very weak year for incomes. The typical household income (after housing costs) stagnated, with 0.0 per cent growth, coming on top of a –0.3 per cent fall in 2017-18. These are figures not normally seen outside periods of recession and reflect the high inflation seen following the Brexit vote. 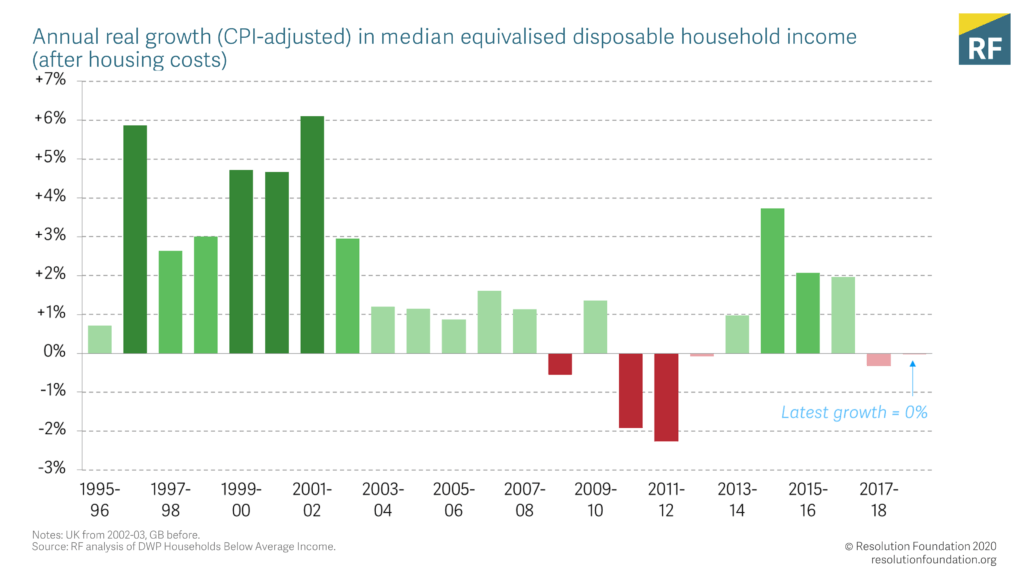 So, the coronavirus recession is arriving only shortly after the post-referendum income squeeze and the financial crisis: a triple hit to household incomes.

The latest figures are even worse for the poorest

Thanks to high inflation, this period was weak for most households. But the poorest fifth of households have fared particularly badly. The typical income for this group (as well as the mean income) fell by around 3 per cent after accounting for inflation. With a fall last year too, this means that the poorest were worse off in 2018-19 than in 2014-15. 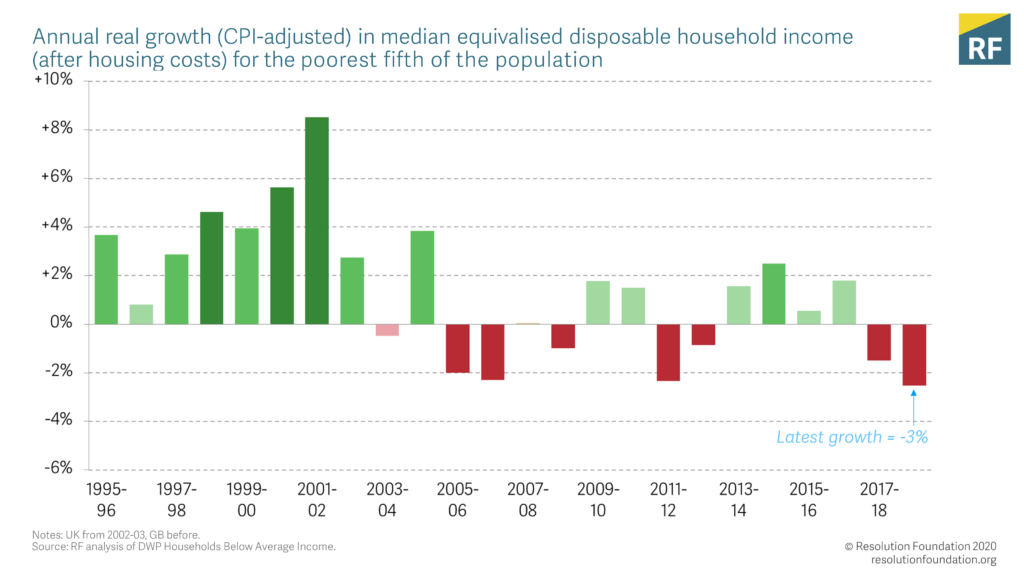 Indeed, given the additional impacts of the financial crisis and of increases in housing costs, today’s figures confirm what alternative data showed earlier this month: that real incomes for the poorest were higher in 2004-05 than in 2018-19. That is an awful position from which to be entering a new recession.

As the chart below shows, the distribution of income growth has changed over time – with the richest, for example, performing best before the financial crisis, but worst during it – but weak growth for the poorest has been all too consistent over the past 15 years. 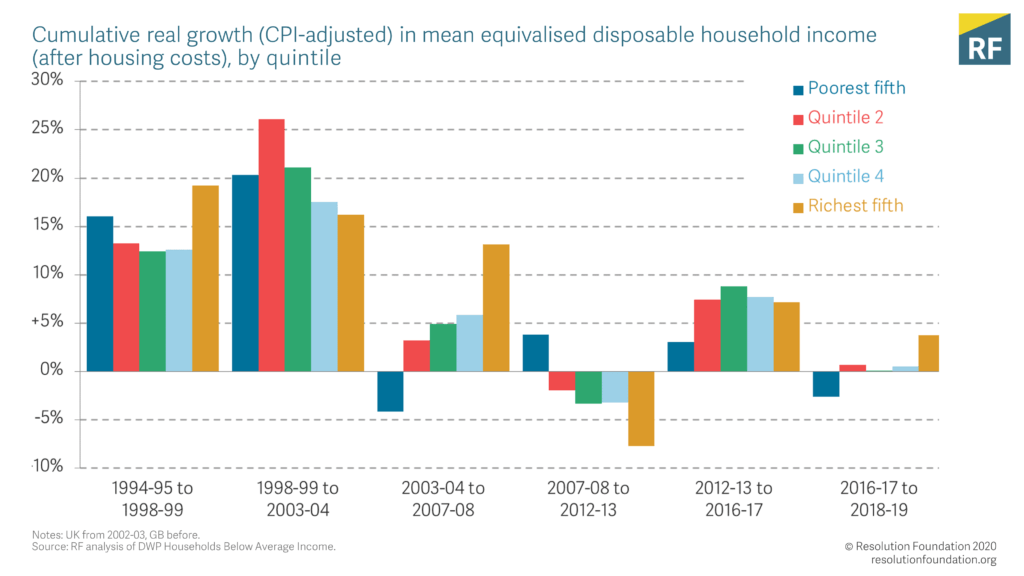 Overall relative income inequality, as measured by the Gini coefficient, rose slightly in 2018-19, but the big picture is simply that inequality remains too high. Inequality in 2018-19 was lower than it was around the financial crisis, but – after accounting for housing costs – was nonetheless higher (at 39 per cent) than in every year on record prior to 2006-07. 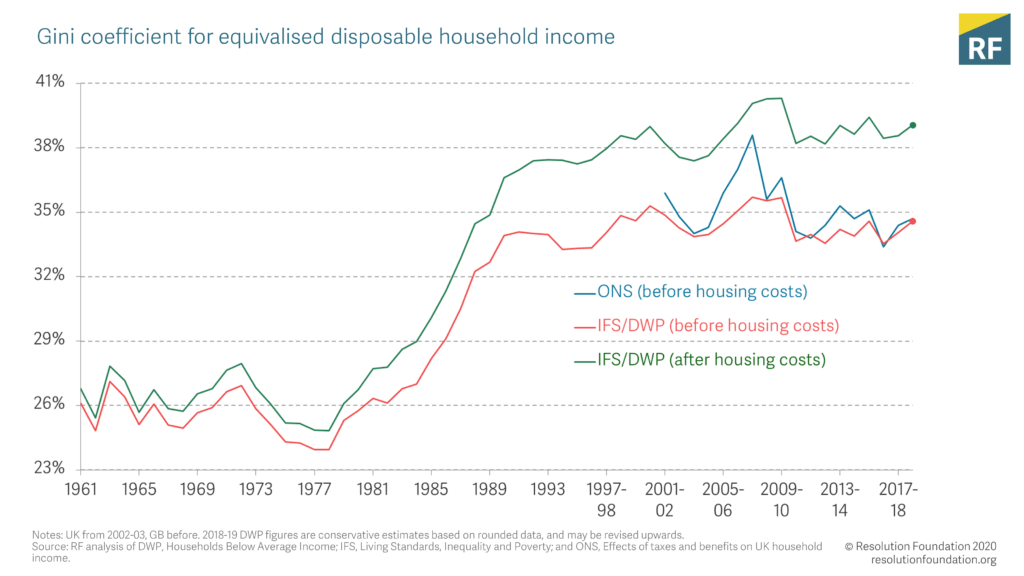 Despite income falls for the poorest, the proportion of people living in relative poverty (that is, below 60 per cent of the median) remained fairly stable, at 22 per cent. The figures for child poverty in particular are notably better than we expected, despite the depth of poverty worsening, but clearly remain too high at 30 per cent. 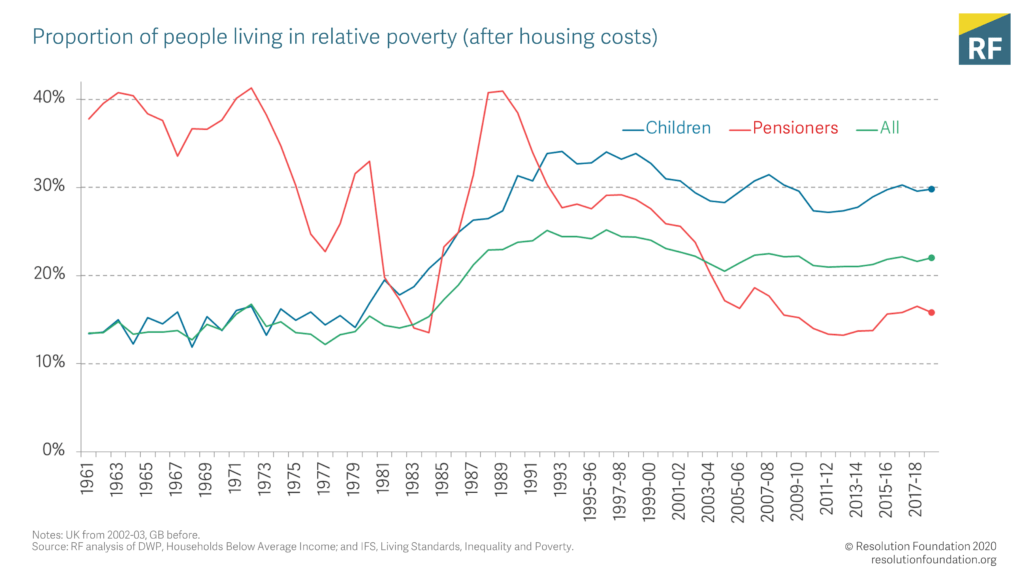 Income falls for the poorest should perhaps not be surprising, given that 2017-18 and 2018-19 were the first two years where the benefit freeze began to bite. But that is not the end of the effects of the package of welfare cuts announced in 2015. Next year’s data, for 2019-20, will reflect another year of the benefit freeze, while other cuts, such as the two-child limit, will not be fully rolled out for years to come, as the chart below shows.

Alongside those cuts, however, the Chancellor has announced some welcome changes that will raise the safety net. For 2020-21 there will be a £20 per week (£1,040 per year) increase in basic out-of-work support (with knock-on impacts for many in work); a boost to Council Tax Support; and a short-term pause in the Minimum Income Floor for the self-employed. Housing support has also been relinked to actual rents (which we believe is a permanent change). These are very substantial and well-targeted interventions, though in terms of living standards the bigger picture is that such support is going to be needed more than ever. 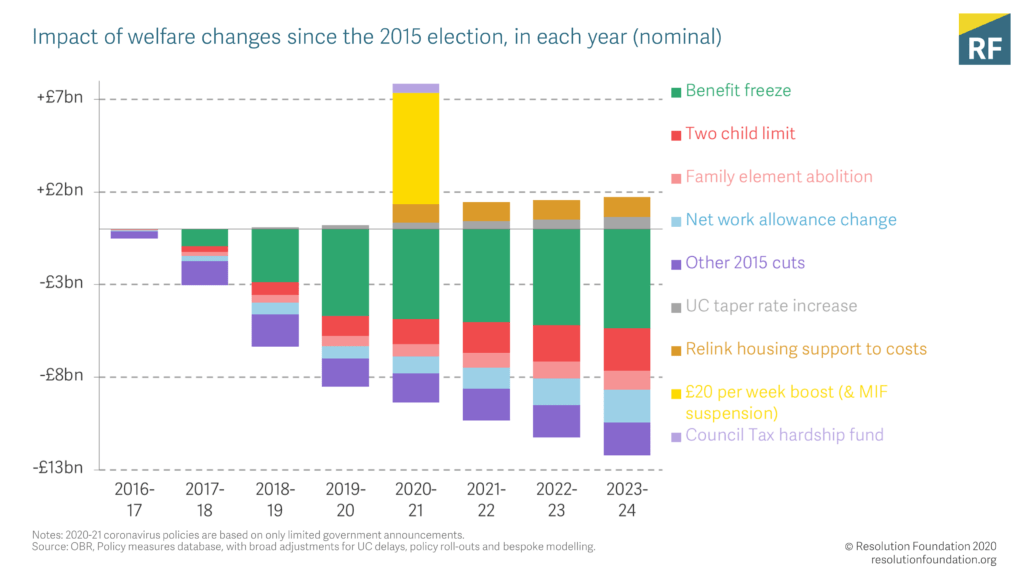 So, today’s data confirms that it’s right for the Government’s immediate support to focus on the poorest, alongside broader interventions to support employment, businesses and the self-employed. Even more support for household incomes may even be needed in the short-term.

Given the longstanding lack of income growth for the poorest – and a now seemingly universal recognition that the safety net pre-crisis was too weak – these figures also show that while some new measures cannot persist forever (such as underwriting wages), the arguments for other interventions to help the poorest are more timeless.

If we want the UK to be a country of strong income growth for low to middle income households, and one with a tolerable safety net in the current crisis and beyond, there is clearly a lot of work to be done.