The backdrop to today’s labour market data has been discussion around the increasingly concerning picture for the winter, with expectations of future increases in the energy price cap continuing to ratchet upwards. But today’s data reminds us that when it comes to pay at least, workers are already facing very tough conditions, even before the winter crunch point.

The fastest fall in real wages since 1977

The squeeze on real pay is the most eye-catching statistic in this morning’s release. Growth in average weekly regular pay was -3.0 per cent in the three months to June across the economy as a whole, after adjusting for CPIH inflation. This comes from a combination of 4.7 per cent growth in nominal regular pay (decent, but not outlandish given the tightness of the labour market) and CPIH inflation which reached 8.2 per cent.

The ONS’s Average Weekly Earnings series started in 2000, and the previous low point for growth in regular real pay was -2.4 per cent, set back in November 2011. So the current rate of real pay growth is at a record low, based on the past 20 years (and of course given the weakness of pay growth post financial crisis, that’s not a good record to be setting). And to make matters worse, the headline pay growth numbers if anything overstate the strength of pay growth, because there is still a furlough effect in the data (we are comparing pay to year ago when around 2 million workers were furloughed, many on lower pay than usual), which is pushing up pay growth by around 0.5 percentage points. 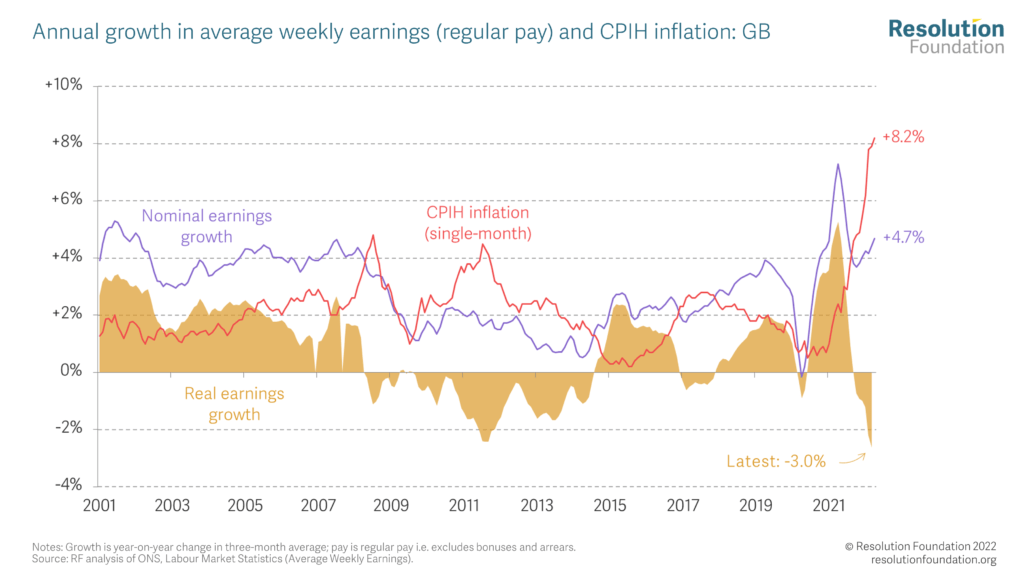 But just as football existed before 1992, so did the economy, and a real-terms fall of 3 per cent isn’t the biggest pay squeeze workers have ever seen. Using some older data (and adjusting it to make it as compatible as possible with the ONS’ regular pay growth AWE series) we calculate that the last time real pay growth was this low was back in 1977, when it reached a low of -6.4 per cent. So the current rate of real (regular) pay growth is, on this measure, at its lowest point for almost half a century. And let’s not forget that the context is in some ways worse now than it was in 1977. The current squeeze comes after 15 years of flatlining real pay. In the decade running up to 1977, by contrast, real pay growth had been averaging a healthy 3 per cent per year. 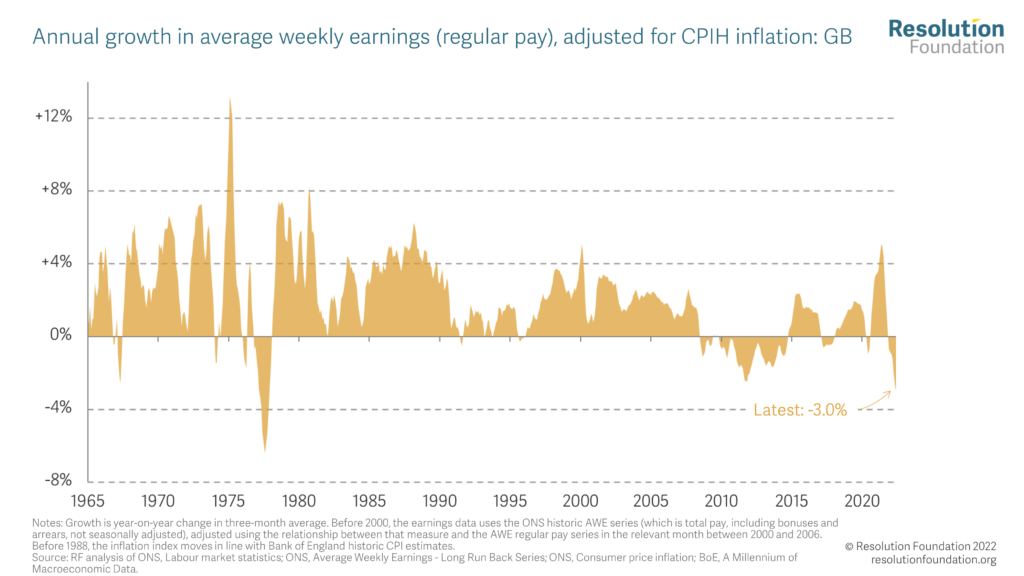 An aside – measurement matters!

It’s important to note, however, that ‘regular’ pay (excluding bonuses) isn’t necessarily the best way of measuring pay. Some prefer to look at ‘total’ pay, which includes bonuses. And on that measure the current pay squeeze is still bad (at -2.5 per cent) but less record-breaking, only the lowest since 2009.

At RF we have tended to focus on regular pay because it gives a better sense of the typical worker, given many workers don’t get bonuses.  For example, in the 2010s, bonuses accounted for 6.0 per cent of pay packets in the economy as a whole, and 11.9 per cent in the business services and finance sectors, but just 0.3 per cent in the public sector. 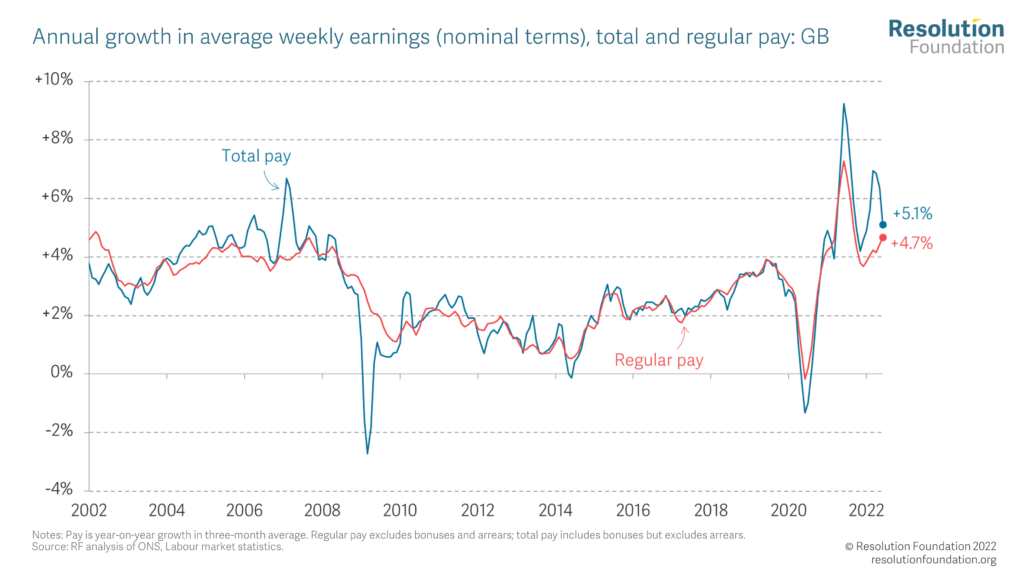 But (as Xiaowei Xu at the IFS points out) there’s a case for focusing on total pay. Bonuses have become more widespread since Covid, seemingly linked to employers’ use of sign-on bonuses and one-off ‘cost of living’ payments. In the hospitality and retail sectors, bonus payments accounted for 10.5 per cent of pay packets in the three months to June, compared to 6.5 per cent in the 2010s.

Because of these bonus payments, total pay has grown faster than regular pay over the past year. But this pattern appears to now be reversing, with total pay growth slowing in each of the past four months (to 5.1 per cent in the three months to June), and regular pay growth rising (to 4.7 per cent). This could be a result of strong labour demand, with recruitment pressure pushing employers to offer higher base pay rather than one-off payments. On the other hand, it’s also true that the number of hires was lower in the last three months than at the start of the year (see below), which might be reducing the number of hiring bonus payments being made.

Turning away from pay and back to jobs, the more positive news in today’s data is that the labour market remains ‘tight’, meaning demand for workers is high, relative to supply. This can be seen in the unemployment rate (still 3.8 per cent in the three months to June, only marginally above its record low of 3.7 per cent), and in the number of vacancies, which at 1.27 million are only slightly below their record high of a couple of months ago. High vacancies were accompanied by large numbers of hires and job moves – in the three months to June, 950,000 workers changed jobs, well above the normal level of around 700,000. Workers moving jobs is usually a positive sign, because they suggest workers are confident. And in fact the number of workers making a voluntary job move (instead of through redundancy or a fixed term contract ending) was at a record high, at 442,000. 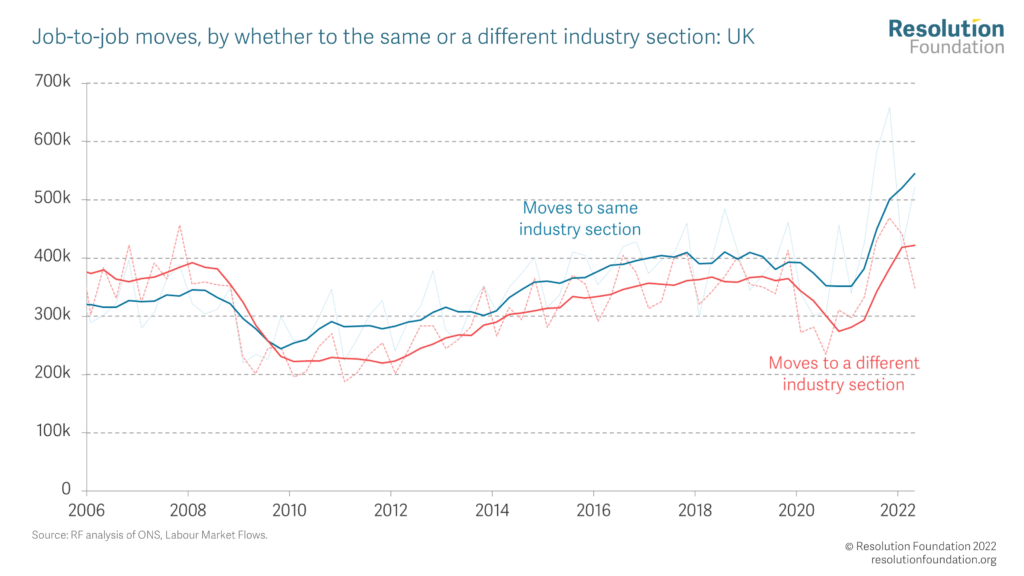 The less positive news on employment was that total employment fell slightly month-on-month, driven by an uptick in the number of people not working and not seeking work (the ‘economically inactive’). We reported last month that there had been some improvement in labour market participation, in particular among the group not working because they were looking after their family or home. We interpreted this as a potential income-driven labour supply effect (‘feel poor, work more’). However, in the latest data, the previous three months’ improvements in participation have fallen away, so inactivity is again at its post-Covid elevated level – which has come mainly from a higher number of workers inactive through ill health.

The question is how long the generally positive picture on employment will last. The Bank of England is now rather strikingly forecasting that unemployment will start rising next year, to an eye-watering 6 per cent by 2025. This is based on its expectation that falling real pay (and its own plans to raise interest rates) will reduce demand. Is there any sign of this in the data yet? At a push, maybe. Vacancy numbers are (very slowly) falling off their high point, and the headline employment rate fell quarter-on-quarter for the first time since 2020. Added to this are measures of consumer and business confidence, which are at very low levels, which in the past has been a leading indicator of rising unemployment. So far, however, unemployment remains resolutely low. This represents the main silver lining in an otherwise grim set of labour market data. 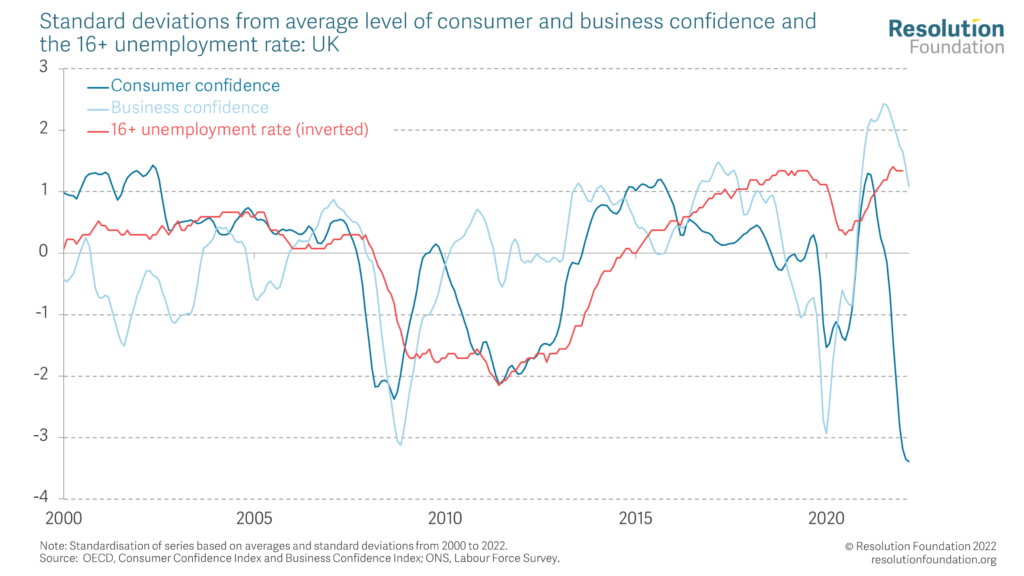