Inequality has been moving up the political agenda in recent years. Public concern about the issue is at record levels. Politicians across the spectrum – from Theresa May’s emphasis on the ‘burning injustice’ faced by many in modern Britain, to Jeremy Corbyn’s lamentation of the ‘grotesque inequality’ that characterises the UK and other rich countries – have promised action.

Yet policy responses too often fail to engage with the structural barriers that are embedded in our society and our institutions – barriers which underpin and perpetuate inequalities over individuals’ lifetimes and across generations. In part, this failing stems from an insufficient understanding of how structural inequalities manifest themselves in different domains, and how they intersect and reinforce each other in order to create barriers that play out very differently across society. We want to make a difference, but we don’t necessarily know how best to.

Consider the hot topic of gender inequality for instance. Recent requirements to publish gender pay gaps made them a top news item in 2018 (though too often the focus was on pay at the top rather than at the bottom as well). Concerns around the burdens of unpaid care work and the undervaluation of the tasks performed overwhelmingly by women are also gaining increasing traction. Yet, while these are all hugely pressing issues requiring urgent attention, too narrow an approach to gender can mean that it’s interactions with other social characteristics remain understudied – and unaddressed as a result.

So it goes with siloed approaches to any other determinant of disadvantage. A holistic, intersectional approach is required to appreciate the complexities of the structural inequalities facing different individuals – and therefore to best design policy interventions. Here’s four reasons why:

The chart below shows median weekly incomes before and after housing costs, split by ethnicity, disability status and gender. The top two rows detail incomes for white non-disabled men and women, with a very clear gender income gap in evidence – worth £30 a week on the before housing cost measure. But the income differentials between white non-disabled men and other groups are very much bigger, rising to £186 for BAME, disabled women for instance. 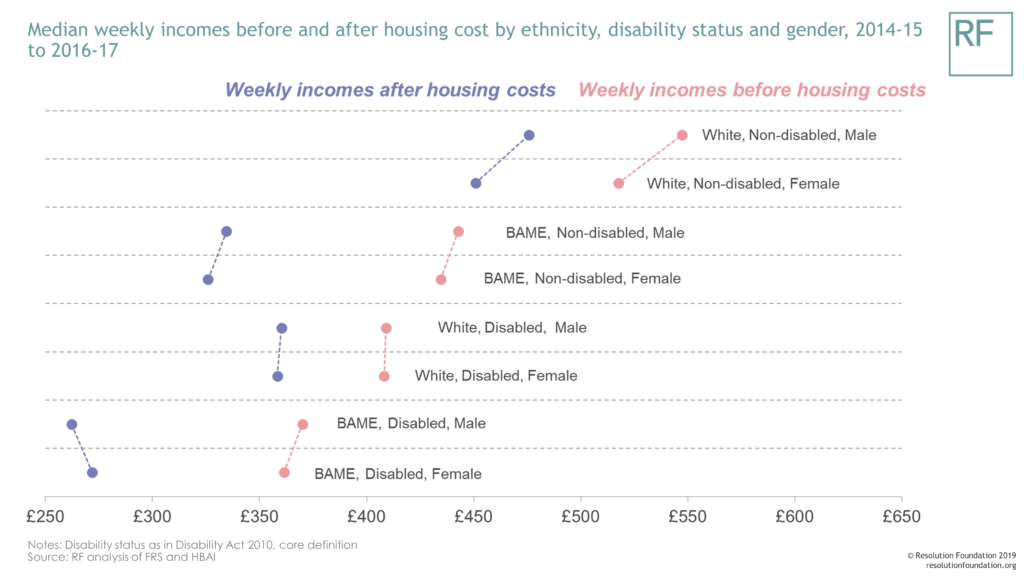 And consider too the role played by housing costs. When we move to the after housing cost measure of income, we see an average reduction in the median incomes of the BAME groups shown here of £104 a week, compared to an average drop of £59 for white groups. As a result, on this measure the ordering of disadvantage looks different – being BAME and non-disabled now delivers lower incomes than being white and disabled (though both groups remain very significantly disadvantaged relative to the white non-disabled group).

These differences in housing costs are of course related to variations in housing tenure, which are set out in the next chart. Here we focus on differences by ethnicity, digging into the BAME group in order to highlight the very significant differences within this broadly defined category. It shows for example, that the homeownership rates of people who are black African or Caribbean (23 per cent) are less than half that of white British people (58 per cent). In contrast, Indians (47 per cent) are only 11 percentage points less likely than white people to own a home. Data limitations mean that we are unable to show income and other breakdowns by more specific groups, but the implication is clear: to better understand and tackle inequality, we need to recognise the heterogeneity of experience within groups. 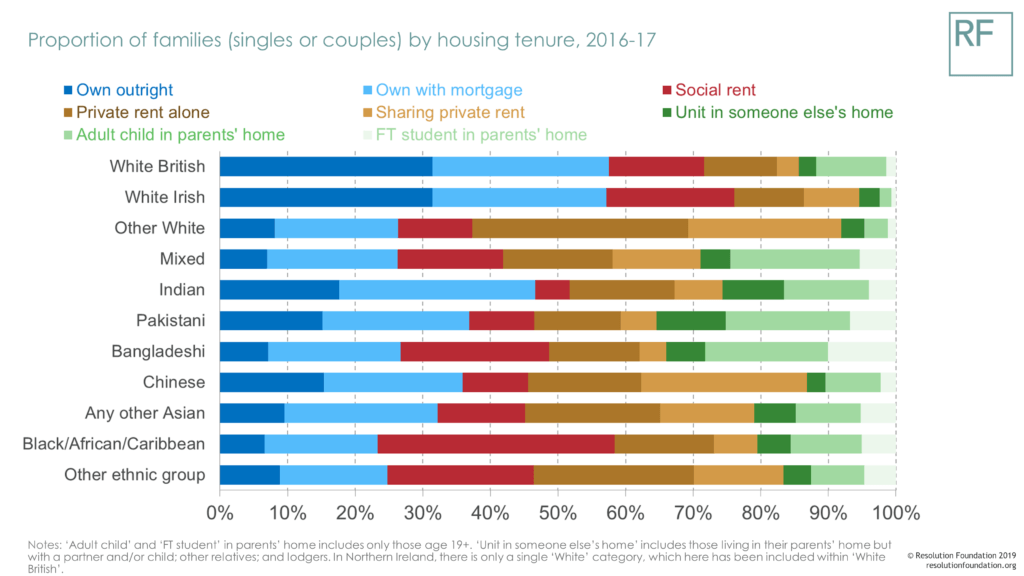 And of course, housing isn’t the only cost that eats into people’s disposable incomes. Disabled people face a large number of extra costs related to equipment, modifications and therapies which are too often ignored in living standards statistics. The charity Scope estimates that these costs amount to an average of £583 per month, and that one-in-five disabled people face extra costs of over £1,000 per month. A simple after housing cost income measure is therefore an ineffective indicator of living standards for disabled groups, serving as another example of why standard methods of studying structural inequalities can fall short.

Other factors driving lower incomes for disadvantaged groups are the jobs that they do and the pay that they receive for them, and regional inequalities can be central to this. As our report on low pay earlier this week showed, most city regions record proportions of low paid employees that are higher than the national average (18 per cent). In some cities, including Sheffield and Tees Valley, almost a quarter of employees are low paid. Inevitably though, these regional inequalities also interact with other forms of inequality to worsen outcomes for affected groups. For instance, the next chart shows that low pay rates for black and Asian groups are just over 20 per cent across Great Britain, rising to more than 25 per cent for Asian people in Greater Manchester and Birmingham, and 33 per cent for black people in Greater Manchester. 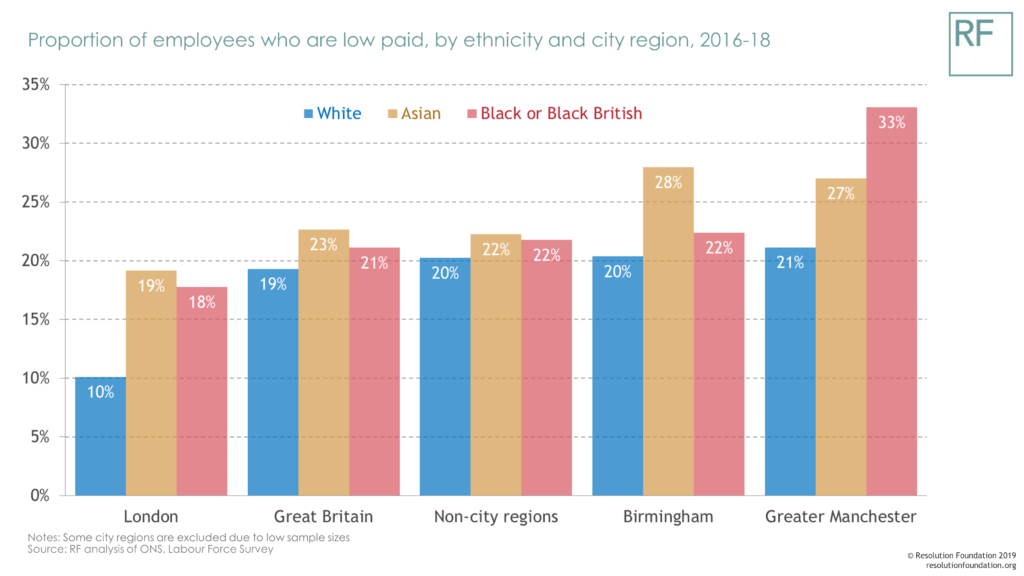 The above figures highlight that averages mask differentials among different social groups. In some cases however, they can lead to important trends being missed altogether. Consider the conclusion we often draw in relation to part-time working (and atypical jobs more generally) for instance. Such work has grown significantly over the past two decades, and previous Resolution Foundation analysis has shown that this is in large part driven by an increase in men working part time in low-paid sectors. Yes, women are still much more likely to work in atypical roles, but the trend is driven by men.

But the next chart highlights a difference in this narrative when we consider different BAME groups. It compares part-time employment rates among different groups in 1996-97 and 2016-17, and confirms that they have indeed increased for men across all ethnicities. But both the level and percentage point increase (though not the proportional one) are considerably larger for Pakistani and Bangladeshi men (rising from 14 per cent to 21 per cent over the period) than for white men (increasing from under 5 per cent to more than 8 per cent). 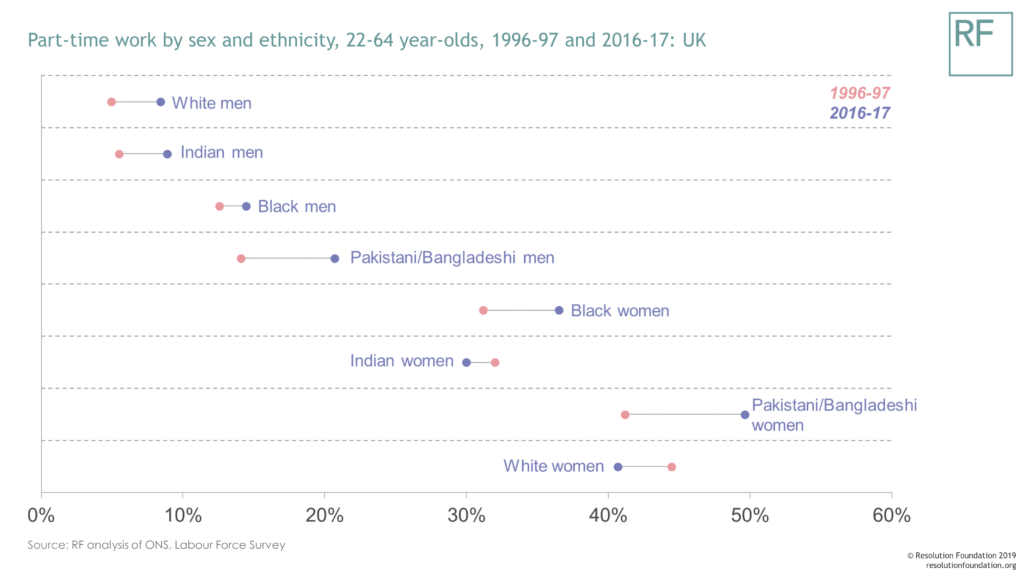 The story for women is also much more mixed than our usual story suggests. Overall it’s true that women are much less likely to work part-time than they did in the past. But the rates have actually increased very significantly among both black women and Pakistani and Bangladeshi women. While this has occurred against a backdrop of rising overall employment in these groups, we can’t simply rule out the likelihood that these women have been disproportionately affected by the growth of atypical work in recent years, when compared to their white counterparts.

The examples above are merely a sample. There are undoubtedly other structural inequalities and complex interactions which we don’t – or simply can’t – measure. And therein lies the problem. A policy focus on dealing with inequality in the UK is good to see, but too often we approach the problem with one hand tied behind our backs. That doesn’t mean we should put attempts to tackle inequality on pause – we’re already doing good things and we must keep striving for more. But we should simultaneously be working harder to better understand the nature of structural inequality.

The good news is there is already some great work out there. Researchers are building ever more nuanced understandings of the barriers and difficulties facing different groups, with an increasing focus on intersections. But these researchers work across different disciplines and domains, and don’t necessarily come into contact with each other, or with those policy makers looking to make a difference. That’s the focus of the project we’ve launched in partnership with UCL, in which we’ll be bringing together researchers and policy makers working on different aspects of inequality. The goal is to stimulate new thinking, and help generate new approaches that deal directly with the root causes of inequality in the UK. The issue is complex, and the answers will inevitable not be straightforward, but we can give ourselves the best possible chance of finding them by ensuring we at least define the problem more completely.