This week saw several major studies on the economic impacts of Brexit end games. Obviously you shouldn’t read them all, partly because you’ve got lives to lead, but also because it’s blindingly obvious what they say.

And anyway who needs to bother with the serious business of weighing up the economic cost of a weaker trade relationship with the EU with the value you place on greater control of migration, or a referendum mandate? You can just spend your time getting irate about the latest Brexit debate trials on I’m a Celebrity Politician Get Me Out of Here, or the KGB’s cunning attempt to undermine our democracy via Brexiteer vicars instead. After all there’s important stuff, and then there’s the really important stuff.

Or you could ignore all the noise and just spend your time browsing this week’s wide selection of reads.

Insecure marriage. Working long hours for low pay can lead to stress, financial difficulties and health problems. But does it impact on parts of our private lives – like whether we get married? Yes says new research (summary) digging into declining marriage rates in the US. Take two workers who are paid the same, one in a high-quality job and one in a low-quality job, and it turns out that the former one is more likely to be married. Perhaps there’s a lesson here for social conservatives in the UK, who tend to focus on the role of the tax and benefit system (anyone claiming the bonkers Marriage Tax Allowance?). If you want more married people, perhaps look instead at ways to restore the benefits of good jobs, like predictable hours. But if marriage isn’t your thing don’t worry – other research shows that the real route to happiness is…. sleeping with a dog (in your bed). I kid you not. Cats or a human partner just don’t cut the mustard. Apparently.

Please leave. $27,000 to leave Tokyo. No, it’s not a new Bill Murray film, it’s the new policy being considered by the Japanese government as it tries to encourage more people to move away to remoter towns and cities – and take their economic activity with them. Now you may be thinking there are policy lessons for the UK here, given we all worry about the outsize economic importance of London. My conclusion: don’t hold your breath for London to follow suit just yet. After all we’ve already found a good way to make people move out – it’s called unaffordable housing and armpit-based rush hour commuting. The British way: more stick, less carrot.

Recoupling (countries). The only European issue anyone here is talking about is Brexit. But take a break to consider some of the numbers in this discussion of the state of economic convergence within the EU from one of the top policy makers at the European Central Bank. It highlights the huge living standards catch-up by much of Eastern Europe this millennium. Relative living standards have surged from 40 or 50 per cent of the EU average in 2000, to around 70 per cent in 2016 in many countries. This is hugely important good news that often gets missed in our worries about living standards slowdowns in the richer parts of the developed world. The spread of global value chains (ie multinationals moving part of their work to Eastern Europe) gets most of the credit for this boost. The speech also reflects on why some countries have missed out (think Albania and Macedonia), reminding us that economic growth for most countries isn’t some mana from heaven: it’s about institutions, institutions, institutions. More discussions of this type about our own convergence challenge of regions within the UK would be very welcome indeed.

Decoupling (wages). Economists spend thousands of pages debating the question of why, since the 1970s, wages for the typical worker in the US have failed to rise in line with productivity growth. It’s a good question – not least because several decades’ worth of flatlining wages is bad for your economics and politics. Now the OECD have taken a comparative look at the same question across rich economies to ask how productivity and wages have diverged. They explain that this decoupling is down to a shrinking labour share (labour taking a smaller share of the economic pie relative to capital) and because wages are becoming more unequal across the pay spectrum. The OECD’s view is that the culprits of this decoupling are super-productive ‘frontier firms’. However they understate the real lesson of the paper – which is that while the decoupling narrative is an obsession in the US, the rest of the developed world has had very different experiences. In the UK, the labour share has risen not fallen since the 1990s and decoupling is only a post-crisis phenomenon driven by entirely different factors than the US (such as falls in sterling, as we explain here). Britain’s problem isn’t a decoupling between productivity and wage growth – it’s that we’ve got so little productivity growth that our wages are stagnant.

Chart of the week this week draws from new data showing the proportion of children growing up in workless households is now under 10 per cent. This is something to celebrate whatever your politics – not least because it’s a long running trend since the 1990s. It also tells us important things about the nature of modern Britain and what our policy priorities should be. Universal Credit for instance was conceived as something to tackle worklessness, but has arrived just as that problem was disappearing for view. Instead its real task today, as the chart shows, is to help tackle the problem that 21st century poverty in Britain is increasingly about children growing up in working households. That means it’s not just about whether people work at all, but about encouraging second earners and helping more people to progress through higher pay and secure hours. Obviously ongoing social security cuts won’t help either. So a cause for celebration and a mission for what needs to change, all in one chart. 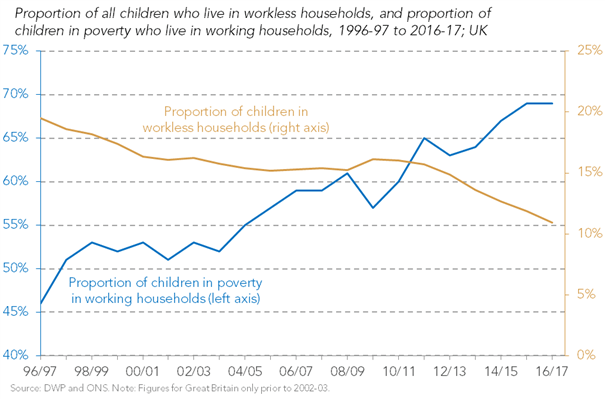 The times they aren’t a-changin’
Why working hours have stopped falling in London and the UK
18 January 2020
·
George Bangham
Dead-end relationship?
Exploring the link between productivity and workers’ living standards
16 January 2020
·
Matthew Whittaker
The beginning of the end… …but not the end of the beginning
Governor Carney’s valedictory speech discusses the future of the UK’s monetary policy remit – but this is just the start of an important debate
10 January 2020
·
James Smith, Tony Yates
Back to top