The Government intends to increase social care spending and is considering its options, having delayed a decision until the Autumn. They are 100 per cent right to do so. One option under consideration is raising National Insurance to make that possible. They are 100 per cent wrong to do so – because the far superior alternative of raising Income Tax is available.

Our social care system has been a national disgrace for years, leaving thousands without the care they need and many others facing financial ruin because of the misfortune of needing care in specific areas the NHS does not cover. If anyone thought the status quo was acceptable pre-pandemic, the last 18 months have hopefully changed their minds. Starting to put this right will cost in the region of £10 billion a year.

The Government is to be applauded for confronting that bill, even if that confrontation has been delayed (again) until the Autumn, and for taking seriously the need to raise taxes to pay for it. After all, they have seen the political pain suffered by Gordon Brown and Theresa May for proposing solutions that were branded as death or dementia taxes respectively by their opponents. No-one should pretend this is easy, and any major increase in funding paid for from general taxation would be better than the status quo.

But, because we do have choices about which taxes to increase, the clapping should stop if the Government really does intend to raise National Insurance (NI), because it would unjustifiably place the burden on the young and low earners. The case for raising NI is that it would relatively easily raise serious sums and do so in a generally progressive way. A 1 per cent rise in all NI rates – including for employers – would raise around £13 billion a year. But there’s more to good tax policy than bringing in the cash.

We often think of NI as being just another form of Income Tax, but it’s a long way from that. The key difference is that some people, and some kinds of income, aren’t covered. Here are four problems that creates.

First, younger people bear more than their share because NI is only paid by the working-age population. Once you reach the state pension age (currently 66) you pay nothing. So those already over that age wouldn’t be asked to contribute anything towards the costs of social care reform that they would be the immediate beneficiaries of. This includes at least 68 MPs who are aged 66 plus. And, unsurprisingly, the typical member of the House of Lords would also be exempt.  Raising Income Tax would, as Figure 1 shows, share the impact more equally across the age spectrum.

Figure 1: Household incomes for pensioners are no lower than the rest of the population, but a National Insurance rise would ask nothing of this group 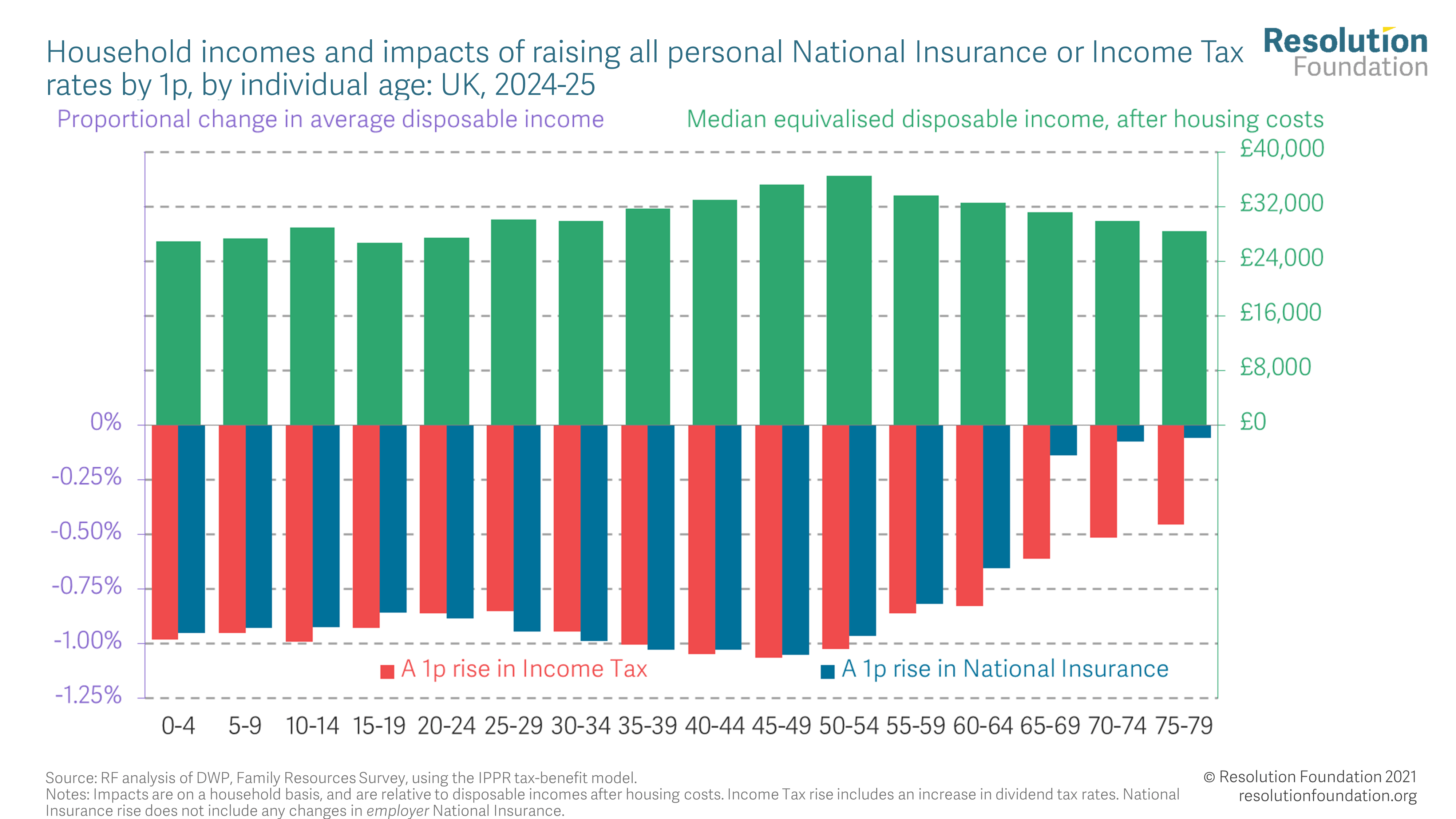 Second, lower earners pay more under a NI rise than they would from an Income Tax rise. Even some workers earning under £10,000 a year would be affected by a NI rise, while only those earning over £12,570 pay Income Tax.

National Insurance is levied only from earnings, and not from unearned income, so those in work would need to contribute more

Third, the focus on lower and younger earners is made worse by the fact that all sources of income other than earnings are exempt. The – generally wealthier – minority who get their income from renting out property, owning a business or being rich enough to have lots of investments won’t contribute a penny. And income from a pension is also not covered. The overall result is that a NI rise is less progressive than an Income Tax rise (particularly if dividend tax was increased in line with Income Tax), despite being progressive overall (see Figure 2).

Figure 2: A rise in National Insurance would be progressive overall, but less so than an equivalent Income Tax increase 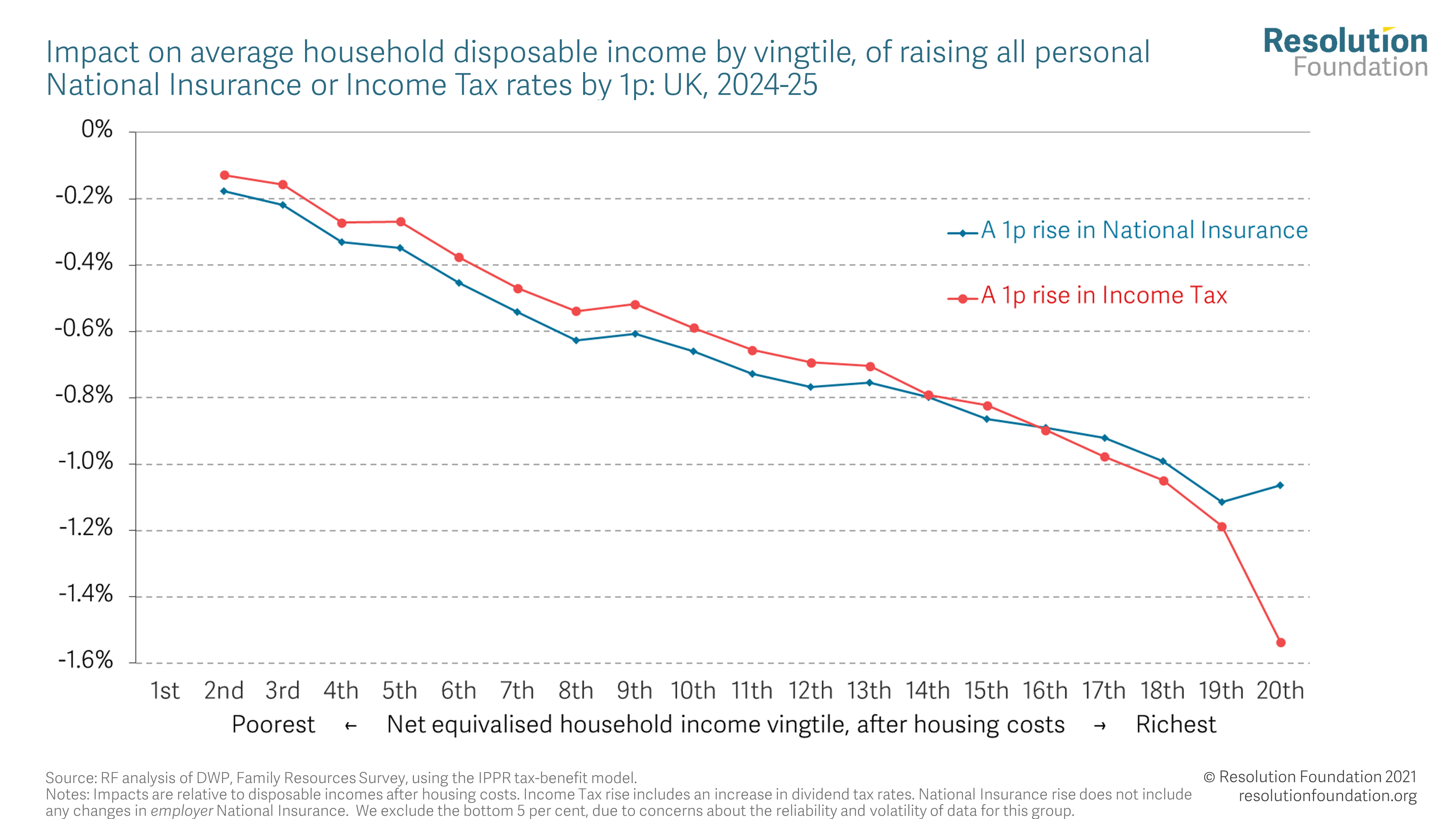 Lastly, if the Government’s plan is to raise the NI paid by employers as well as employees, it would deepen one of the big problems facing our tax system: the ludicrous tax gap between employees and the self-employed (see Figure 4). In fact, the tax rise on employees would ultimately be double that for the self-employed, because employer NI isn’t paid if a worker is self-employed but for employees it will eventually get passed on in the form of lower wages. And remember the self-employed already get a £5.9 billion-a-year NI tax break. This problem also creates a strong incentive for firms to push their employees into bogus self-employment (or for individuals to set up firms so they can take their pay as dividends, which is also exempt from NI). The rising share of workers who are self-employed over recent decades means that more and more workers are not covered by employment law, and costs the Treasury billions in tax avoidance. The Chancellor promised only last year to address this problem; he should at the very least not make it worse.

Figure 3: Employees already pay more in taxes than the self-employed 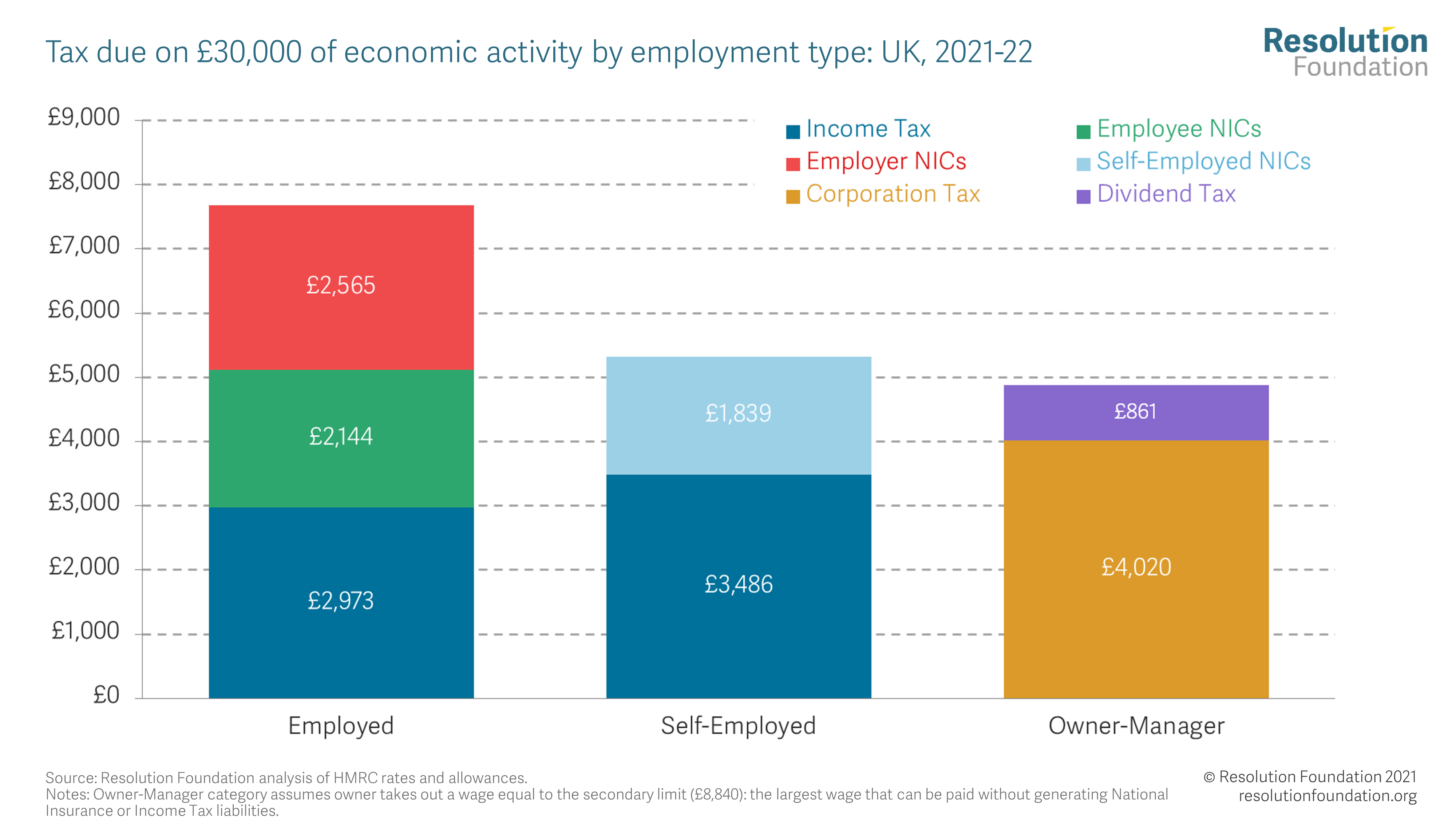 These four reasons should be an open and shut case against a NI rise when a better alternative is so clearly available. An increase in Income Tax would be fairer between rich and poor, and young and old. The fact that NI is still being considered reflects one view of the politics of the problem. This holds that an NI rise is less visible to most workers (if part of the rise is on employers) and that the public has historically seen a more direct connection between NI and funding the health service, a connection that in any practical sense does not exist.

But the Government is taking a gamble if that static view of the politics dominates their thinking. This tax rise will be by far the most controversial one they put in place this Parliament. It will give Labour, now desperate for some policy, an easy route to demonstrate that the funds could have been raised more fairly with higher-income households paying more of their fair share. It will not be the easy ride that a simplistic reading of the polling on support for raising NI might lead you to conclude. In contrast, a straight Income Tax rise, with a slightly higher increase for the very top, would be something the opposition would have to support – taking a lot of the political pain out of doing the right thing.

Our social care system is a national disgrace, so the Government is right to recognise it needs more funding and to be honest with the public that this means higher taxes. But raising National Insurance is a terrible way to go about it. It asks younger and lower-paid workers to contribute more than older and wealthier people, compared to a fairer rise in Income Tax. Why we would do that having just lived through a pandemic that has increased wealth but hit young low earners hard is a question to which no-one has a good answer.