In the 1980 presidential contest between the incumbent Jimmy Carter and Ronald Reagan, the latter asked voters “Are you better off today than you were four years ago?”. Although far from the only question that voters do or should ask, it is a reasonable question. In the UK, since 1955, real household disposable income per person has risen by just over 2 per cent a year on average: so a parliament of four or five years should deliver income growth of around 10 per cent. Sadly, the Office for Budget Responsibility’s (OBR’s) latest forecasts suggest the current parliament could deliver the worst growth rate on record, as the post-financial-crisis income stagnation continues.

The past 14 years have been weak for household income growth, and the outlook is also poor

Figure 1 shows the history of household income growth since the 1950s, including the recessions of the mid-1970s and early-1980s, and a period of relatively steady growth over much of the 1980s, 1990s and 2000s.1 More recently, it also shows the shocks of the financial crisis, the post-Brexit-referendum inflation spike, and the immediate impact of Covid-19. Worryingly, the OBR is projecting a further, imminent decline in household income, as high inflation outpaces earnings growth and Covid-19 support is withdrawn. On the OBR’s numbers, incomes in Q4 2021 will be 1 per cent lower than in Q4 2020,2 despite the broader economic recovery (GDP per person is forecast to be up by 7 per cent over the same period).

Figure 1: The OBR forecasts another decline in household incomes 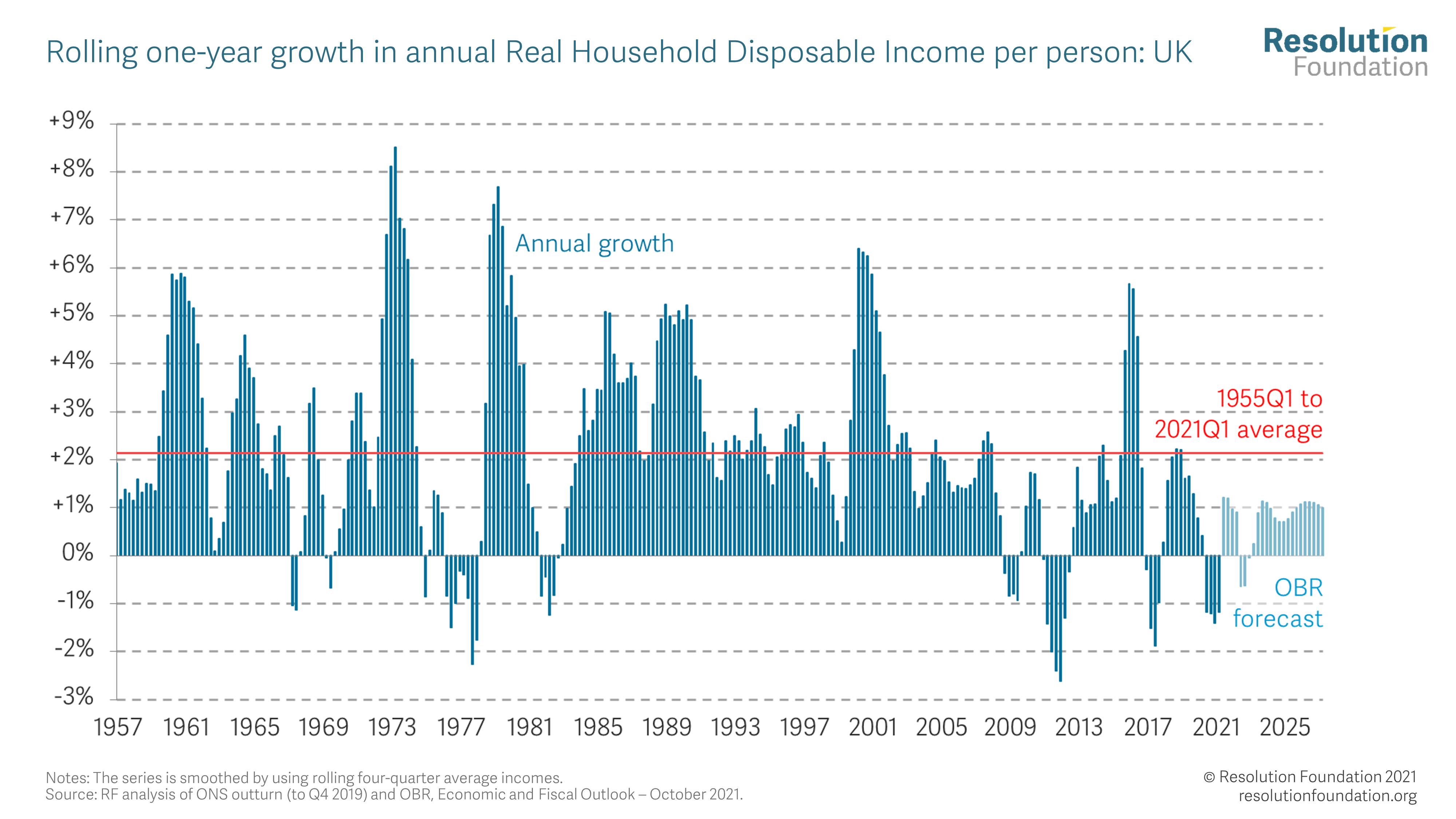 The result of having so many crises in such quick succession, without any strong sustained growth periods, means that the 15 years from 2007 to 2022 are forecast to be the worst on record for household income growth, as Figure 2 shows. Total growth over this period is forecast to be 9 per cent, compared to a pre-financial-crisis average of almost 50 per cent per 15 years. Indeed, if the past 15 years had been ‘normal’, real household incomes would now be more than a third higher: at £30,000 rather than £22,000 per person.

Figure 2: The 15 years from 2007 to 2022 are forecast to be the worst on record for household income growth 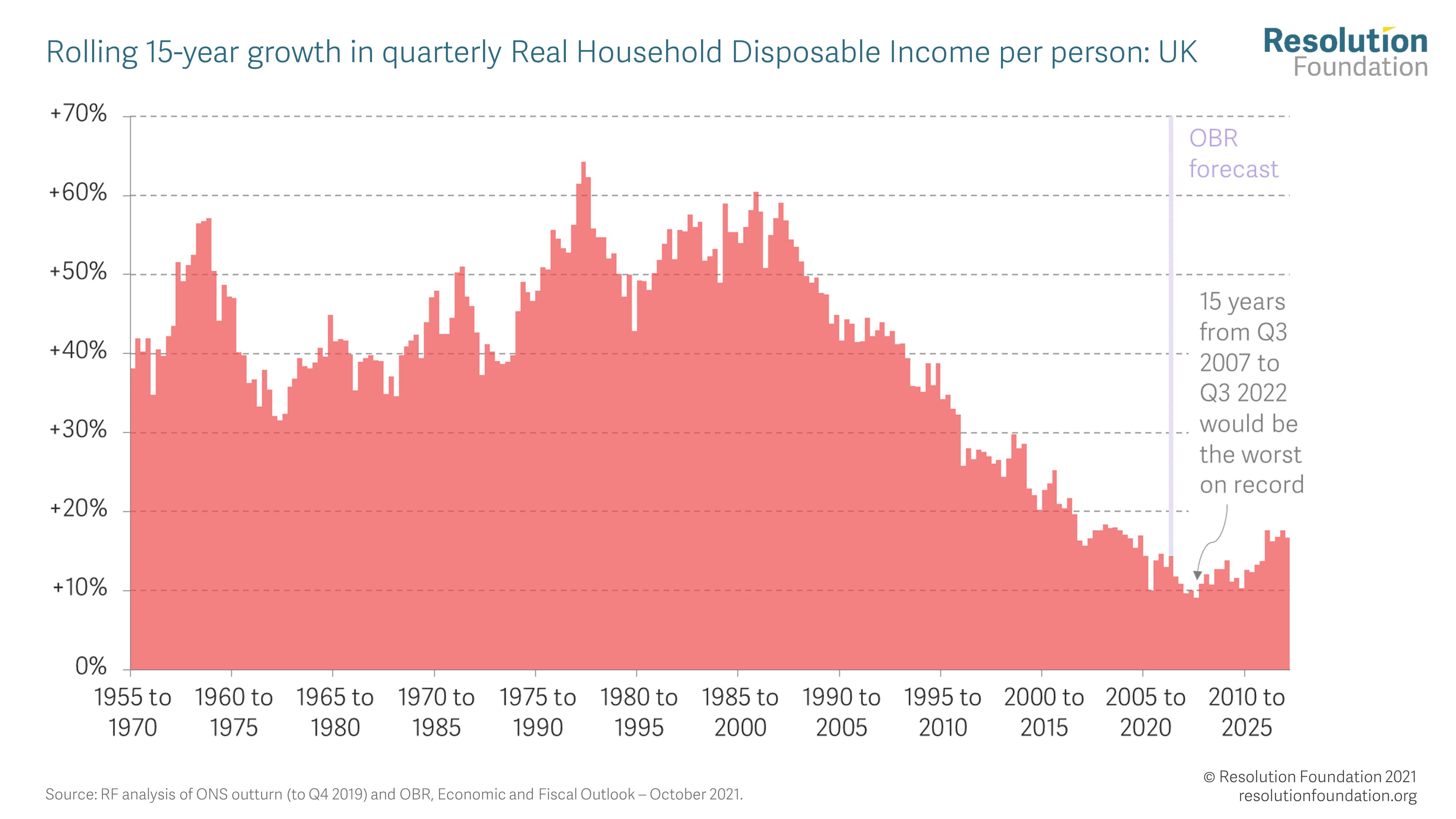 Of course, some of the income hits of the past 15 years may now be considered ‘water under the bridge’. But, as Figure 1 showed, not only is the immediate outlook poor, but the OBR’s forecast is for only tepid household income growth through to 2026-27. At its highest, forecast growth is – at around 1 per cent – only half the historic average.

If we compare the average income in Q4 2019 (the most recent election) with that projected for Q2 2024 (the default election date under the not-yet-repealed Fixed-term Parliaments Act), we find that real incomes are expected to grow by only a negligible 0.5 per cent over the parliament. Looking at how this compares to the previous 17 parliaments, the current one would be the worst on record, in terms of both overall growth and average annual growth.3 A close second place would go to the parliament between 2015 and 2017, during which real household disposable income increased by just 0.7 per cent as high inflation reduced spending power, although this was a short parliament (and dividend timing effects were also partly responsible).4

Table 1: Based on the latest OBR forecasts, this parliament is set to be the worst on record for household income growth 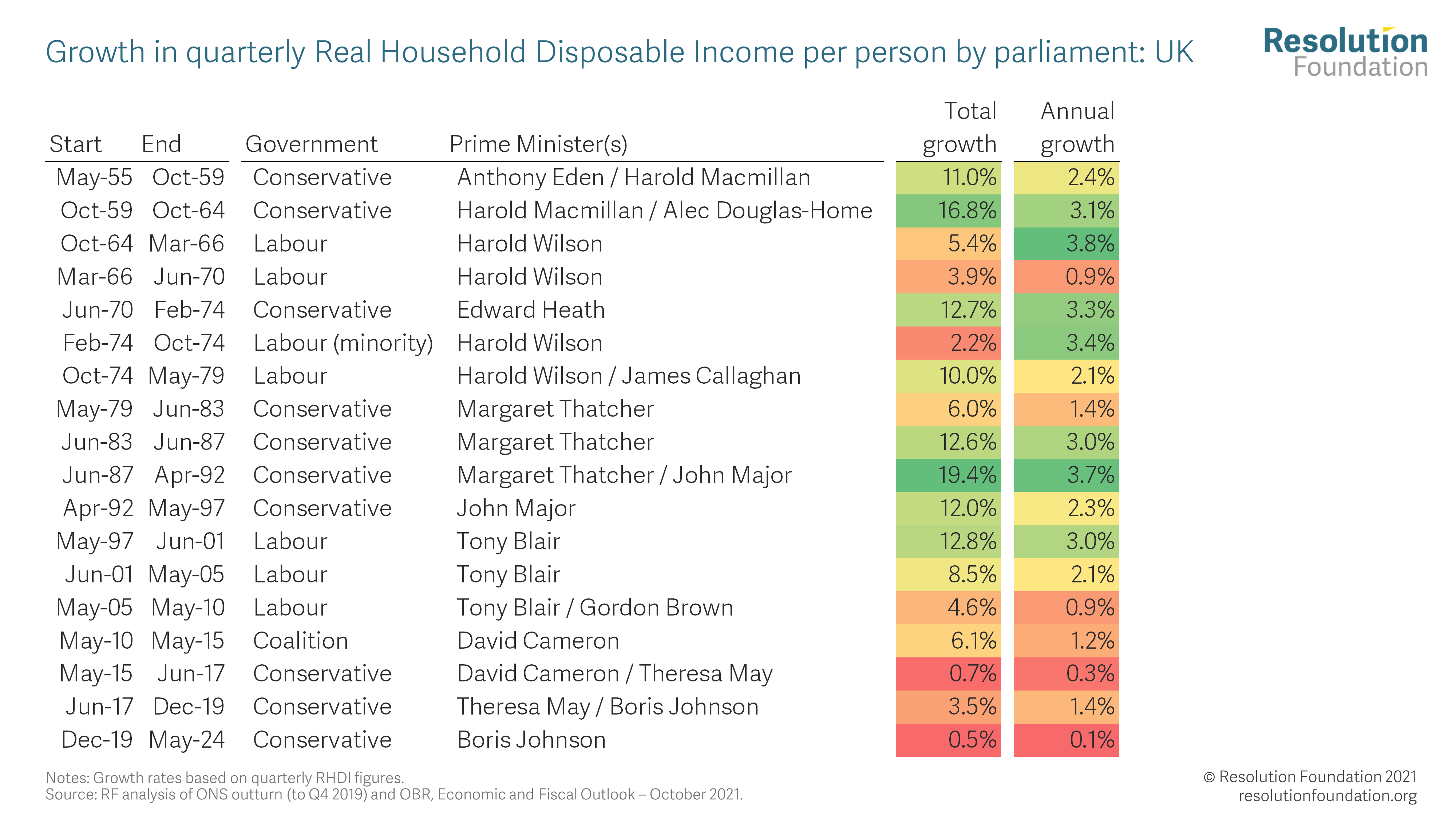 What’s more, in one important way this projection is a generous estimate. Since the OBR calculated its forecast, new outturn income figures have been released that are worse than the OBR assumes. While the OBR projected that real incomes would grow by 1.5 per cent between Q1 and Q2 2021, the new ONS figures show a fall of 1 per cent. If this shortfall is not compensated for by higher-than-expected growth later (or revised away), then this parliament is on track to deliver a fall in incomes overall.

This forecast is not set in stone

Why is the OBR’s disposable income forecast for this parliament so bad? There are three leading reasons (which are explored in more detail in our Budget reaction). First, and most importantly, the forecast for real earnings from work is very poor, with growth of only around 3 per cent over the parliament. Second, the outlook for net earnings is even poorer, as the Health and Social Care Levy and tax threshold freezes take a bite out of pay growth. And, finally, the 16+ employment rate is forecast to fall from 61.7 per cent to 60.9 per cent. Unemployment is forecast to remain slightly higher than at the most recent election, with an overall rise from 3.8 per cent to 4.2 per cent; but an increase in economic inactivity (including retirement) will be just as important – rising from 35.9 per cent to 36.4 per cent – and this as much due to demographics as any Covid-19 effect.

Clearly, this OBR forecast leaves a lot of room for reality to outperform expectations, and policymakers must strive (and hope) for that to happen. But the bad news for the Government is that, at present, the projected overall answer to the question “Are you better off today than you were four [or five] years ago?” is expected to be essentially “no”.

1 Average Real Household Disposable Income is a National Accounts measure. Following the approach of the OBR, the income of ‘non-profit institutions serving households’ is also included, though this is relatively small. Imputed rent is also included. Our next ‘Living Standards Outlook’ will look at the prospects for an alternative measure – equivalised disposable income after housing costs – and its full distribution.

2 These numbers can be derived from the OBR’s October 2021 Economic and Fiscal Outlook: Economy supplementary tables, Table 1.5. For data from 1955 to 2019, we have used ONS series NRJR and EBAQ. These were revised at the end of September – too late to be included in the OBR’s Economic and Fiscal Outlook. For 2020 and 2021 (in addition to the forecast period) we have used the OBR’s income figures, in order to be conservative and because the OBR has used improved population totals for this period.

4 Dividend income was unusually high in 2015, as dividends were brought forward from future years to avoid tax rises that took effect in April 2016. In turn, this weighs down on average income growth between 2015 and 2017.