The Chancellor yesterday announced a big and well-targeted package of energy bill support. Of the £15 billion of new measures, almost double that announced earlier in the year, twice as much will go to households in the bottom half of the income distribution as the top half. This fills the gaping hole left by the focus of previous support on middle- and higher-income households, and means that all measures announced this year to support households will in effect offset 82 per cent of the rise in households’ energy costs in 2022-23, rising to over 90 per cent for poorer households. Because 2022-23 has also seen major tax rises for higher income households, the effect of all tax and benefit policies coming into play this year is highly progressive: households in the bottom quintile will gain on average £1,195, compared to £799 for households in the middle quintile, while the top quintile on average loses £456.

The Chancellor said he has chosen to deliver the bulk of new support through one-off payments, rather than an across-the-board rise in benefit entitlements, to speed up the process. This approach is also £1 billion more generous than simply bringing forward to October the 9.5 per cent benefit uprating expected next April. But it has introduced some rough justice, with cliff edges and flat-rate support that is not always well-targeted towards those whose bills are rising the most. Among working-age households receiving means-tested benefits, households with three or more children will see energy bills pushed up by £500-plus a year more than those without children, but will get the same one-off payment.

Importantly, the Chancellor confirmed that the Government will use the usual rules for uprating benefits in April 2023, meaning that most benefits and the State Pension are set for an increase of around 9.5 per cent, the largest nominal increase since 1991. Yesterday’s one-off payments will protect lower income households from higher prices yesterday, but it is this commitment that will do so tomorrow. In contrast, the more-universalist support (through the Council Tax rebate and energy bill discount) fall away in 2023-24, meaning that fiscal policy is (rightly) only trying to delay rather than prevent the impact of rising energy bills for better-off households. This winter, though, now looks far less grim for many households as a result of yesterday’s package.

Yesterday, the Chancellor announced a significant package to support households through the cost of living crisis that is being driven by soaring energy prices. With a price tag of £15 billion, this almost doubles the value of support for living costs that has already been announced this year (£9.1 billion worth of support was announced in February 2022, and £8.7 billion in March). The scale of additional support reflects further energy price rises to come:  this week Ofgem announced that it expects the energy price cap in October 2022 to reach £2,800 for a typical family, up from £1,971 now, and £1,277 last October. As with any significant fiscal expansion, it will be for the Bank of England to decide how this affects its attempts to bear down on medium-term inflation pressures.

The key measures announced yesterday are:

These come on top of measures already announced earlier this year, namely:

Yesterday’s measures are progressive, with a set of universal payments to all households complemented with large payments for those on means-tested benefits and pensioners. Figure 1 shows that twice as much of the £15 billion package is going to households in the bottom half of the income distribution as the top half. The average gains from yesterday’s announcement are £823 across the poorest fifth of households, compared to £500 for the middle fifth of households, and £296 across the richest fifth (not that many households in the bottom vingtile are those not claiming benefits to which they are entitled).

Figure 1: The new measures target support at those who will suffer the most from higher energy prices 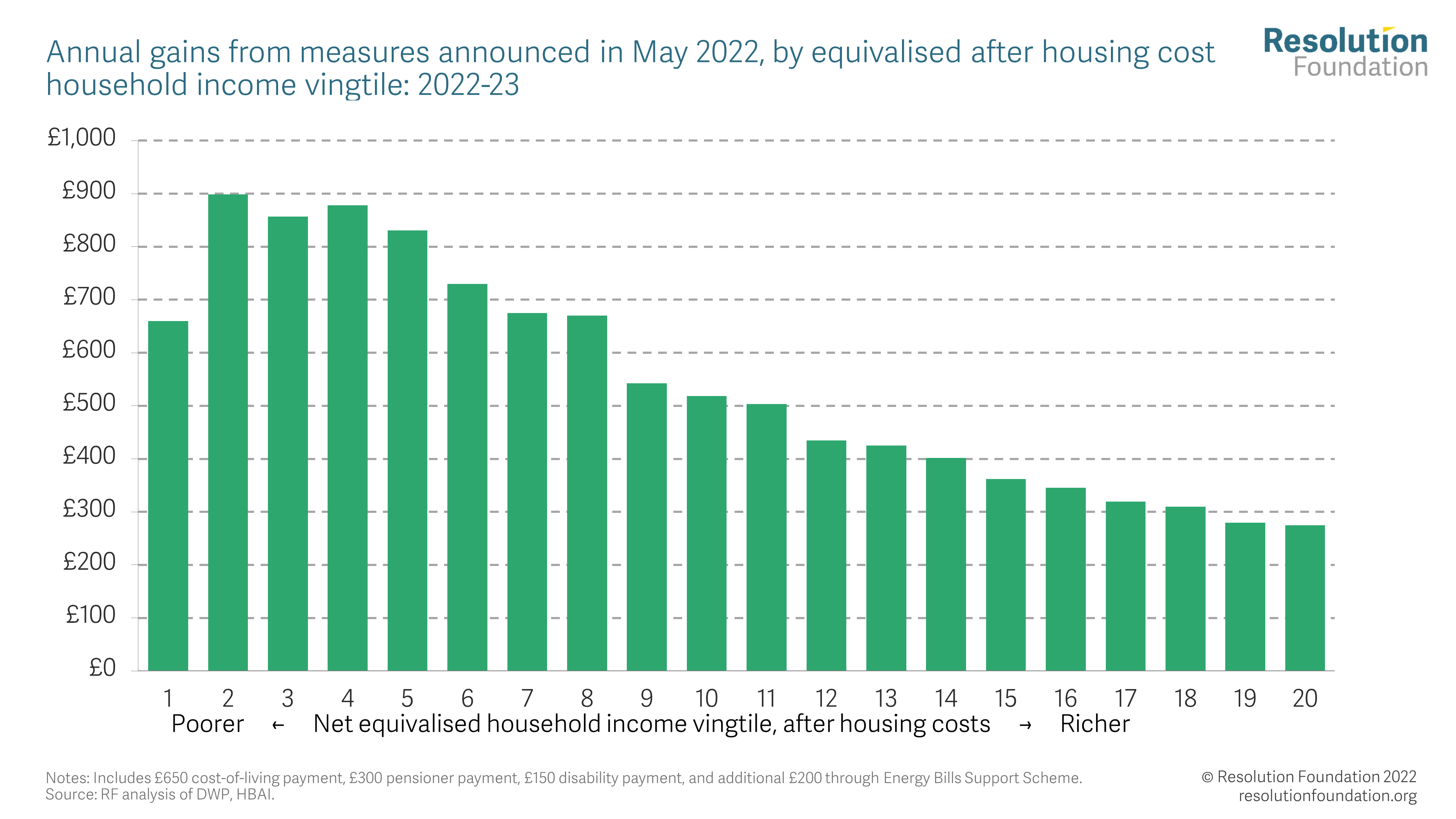 The progressive nature of this support is justified for two reasons:  first, because the impact of energy price rises is very bottom-heavy as energy is an essential good, and second because (as we have shown before) previous support packages did not target support at this need, with £6 in £10 going to households in the top half of the income distribution. Yesterday’s package therefore fills in the big gaps in previous packages, as

Figure 2 shows. In the February package the support was fairly equally distributed with average support of £296, £289, and £259 for the bottom, middle and top household income quintile respectively. The support announced in Spring Statement was far more generous for middle- and high-income households who received more than £400 in support delivered through tax cuts, compared to just £136 for the bottom quintile. In stark contrast, the Chancellor filled in the support gap by using the benefits system yesterday: the bottom quintile received more than twice as much support compared to the top quintile (£823 versus £296).

Figure 2: The progressive nature of the most recent package helps offset the poor targeting of previous announcements 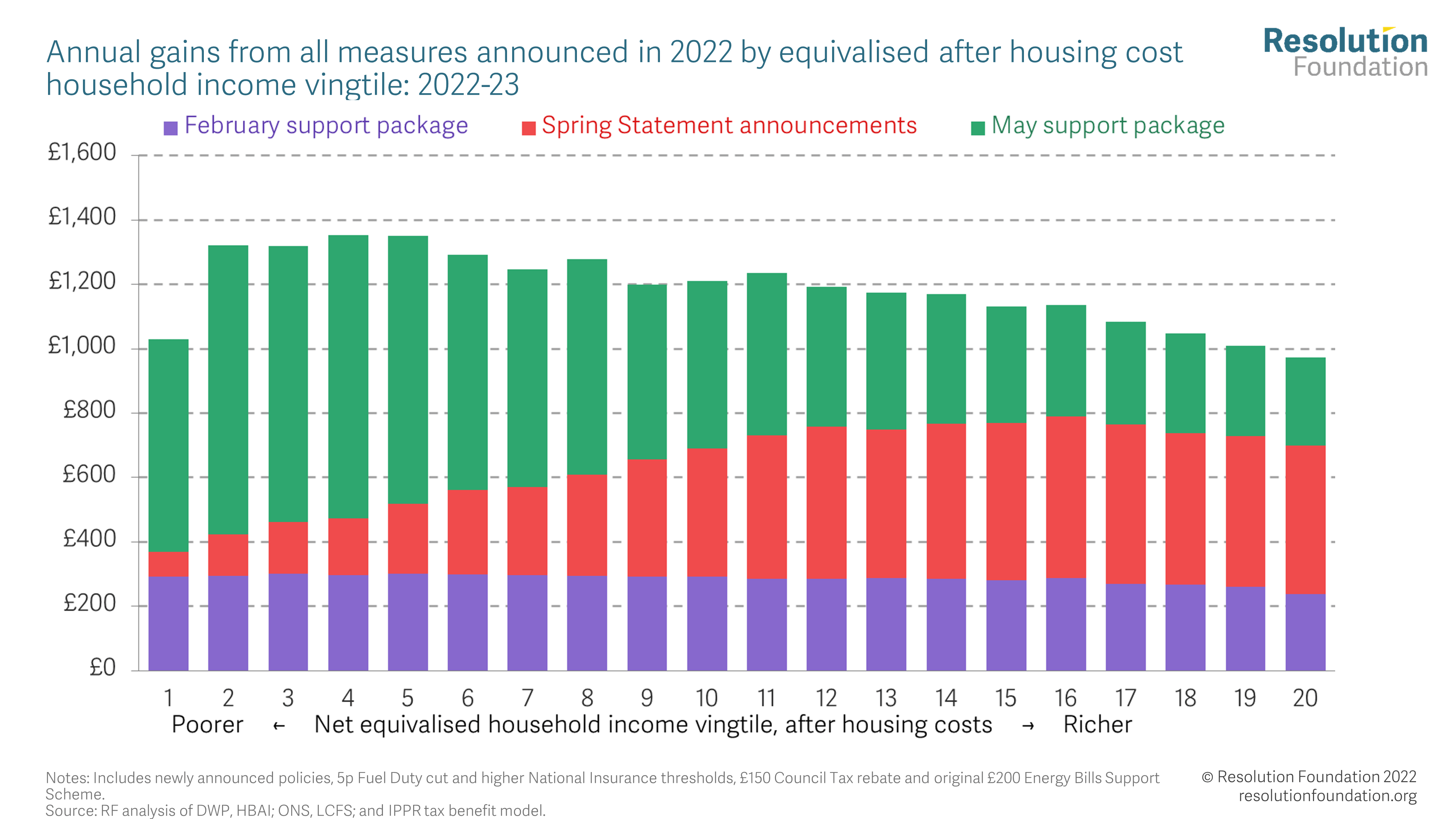 Of course, not all fiscal policies introduced this year relate to energy bill support, with large tax rises also coming into effect in April 2022. Those tax rises involve very significant take-aways from higher income households, meaning that the overall effect of policies coming into effect this year – including the three support packages and previously announced tax rises – is highly progressive. As Figure 3 shows, the average cash gain to households in the bottom quintile is £1,195, compared to £799 for households in the middle quintile. Households in the top quintile are set for an average cash loss of £456.

Figure 3: Significant tax rises that came into operation this year means the Chancellor has, in effect, been highly progressive 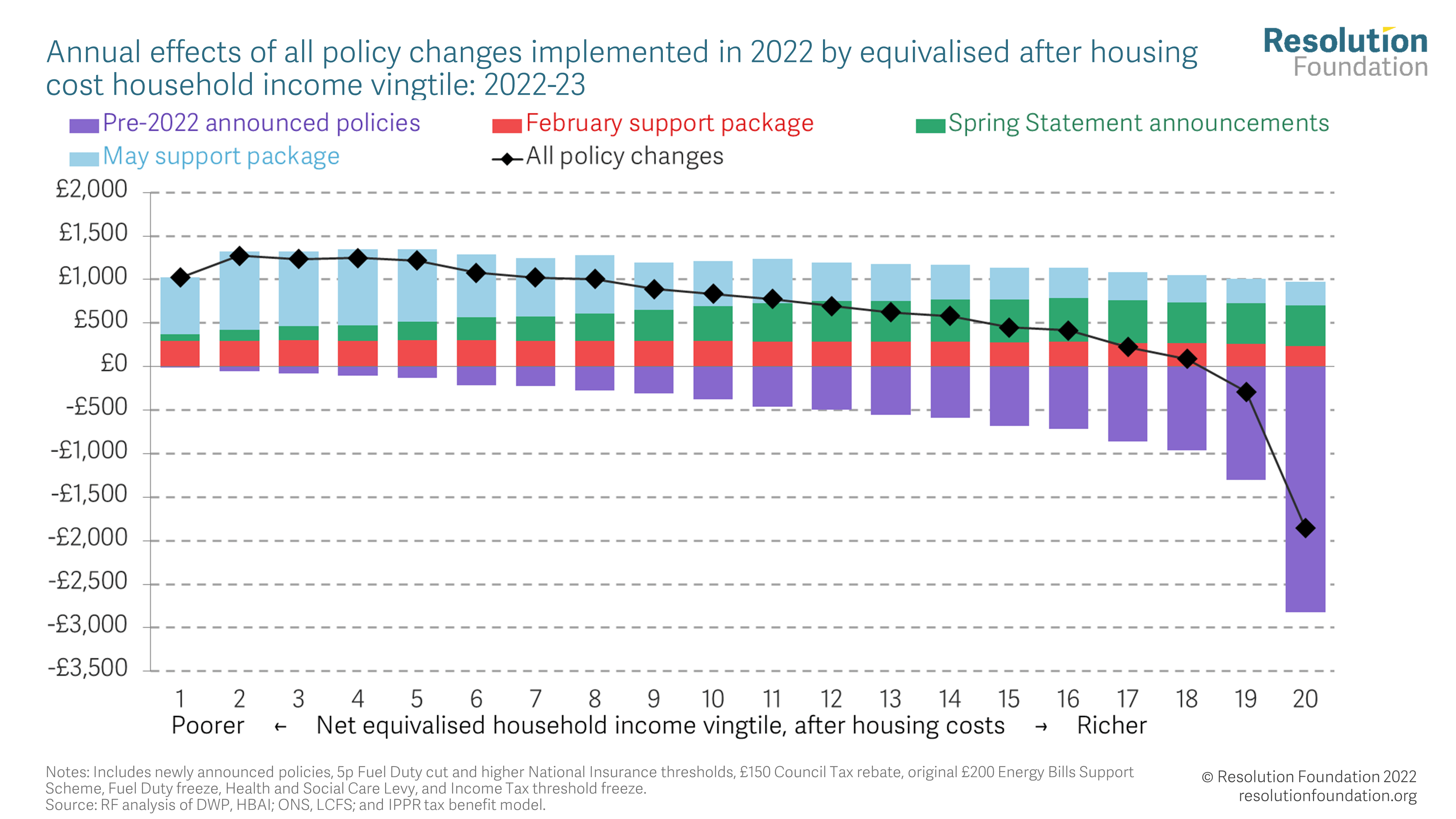 The Government has offset 82 per cent of the energy price rise, rising to 93 per cent for poorer households

Over the combined set of measures announced this year, the Chancellor has in effect offset 82 per cent of the anticipated rise in the household sector’s energy consumption, but this rises to 93 per cent for households in the bottom three income deciles (see Figure 4).[4]

Figure 4: Support measures announced this year have offset the overwhelming majority of the energy bill rise 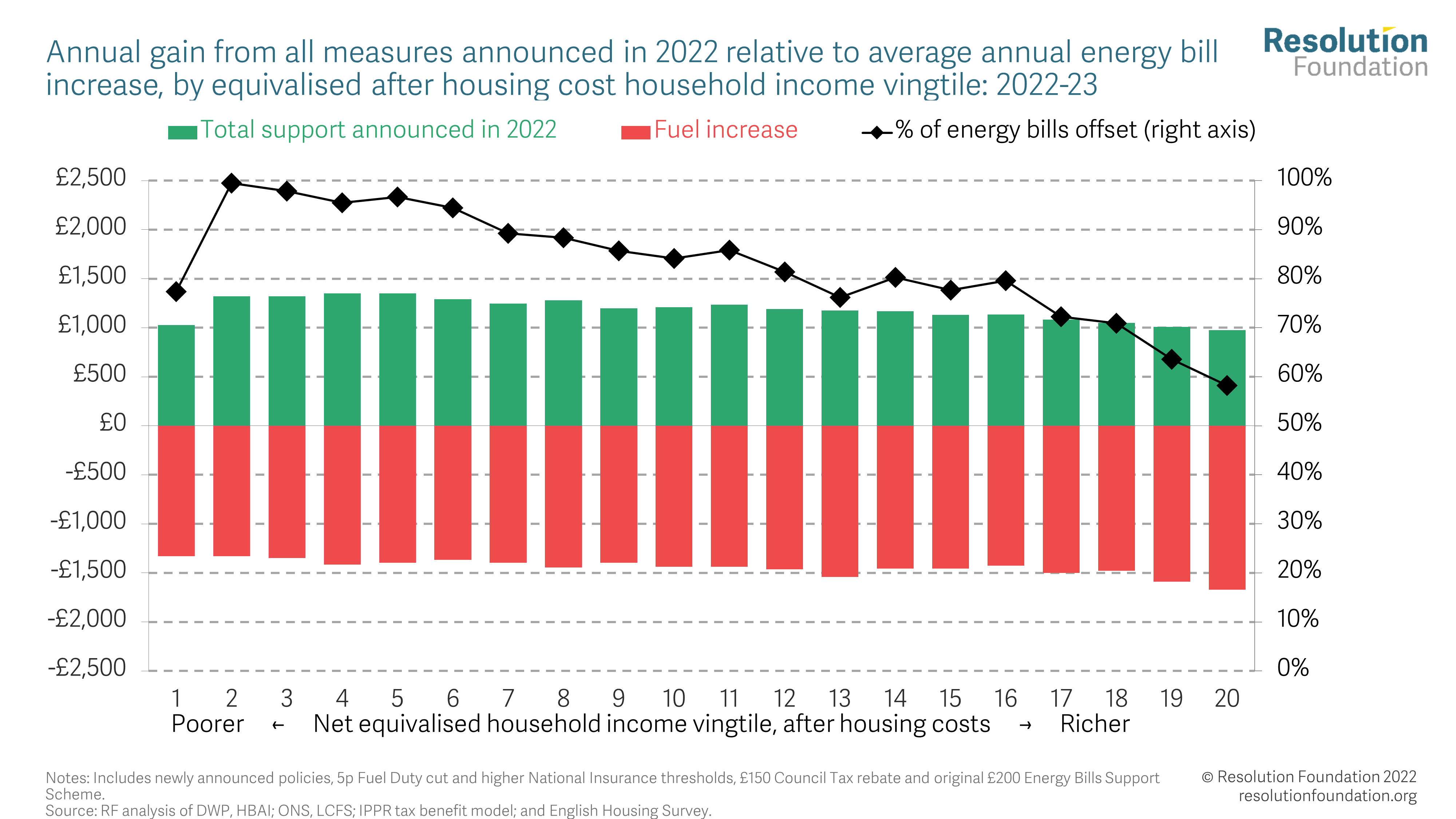 The Chancellor referred to the choice he faced in providing help to benefit recipients through one-off payments or by bringing forward next April’s benefit uprating to this autumn, arguing that one-off payments are easier to deliver in a timely manner given the difficulties of increasing some benefits outside of the normal cycle. This is a valid consideration, although one that could be overcome for most benefits.

But one advantage to the approach taken by the Chancellor is that bringing forward next April’s uprating to this autumn would likely have provided less support than the package announced. [5] As Figure 5 shows, the payments deliver total support that is £1 billion higher than would have been delivered via bringing forward an expected 9.5 per cent uprating to October 2022. 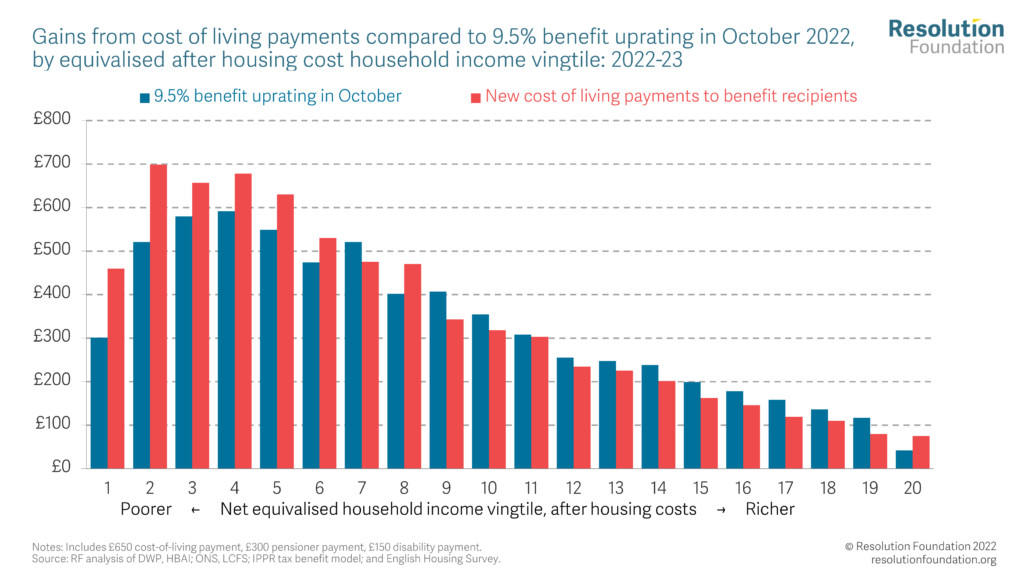 The key disadvantage of providing support through one-off payments is that it is less well targeted on need – broadly defined or in terms of energy consumption – within the population receiving benefits. We showed earlier this week that three groups in particular were at above-average risk of suffering extreme fuel stress this winter: households contains a person who is long-term sick or has a disability; households containing a pensioner; and households containing three or more children. It is worth thinking how each of those have fared under the package of measures the Chancellor has announced yesterday:

Figure 6: Uprating all benefits would have led to bigger gains for large families than the one-off payments 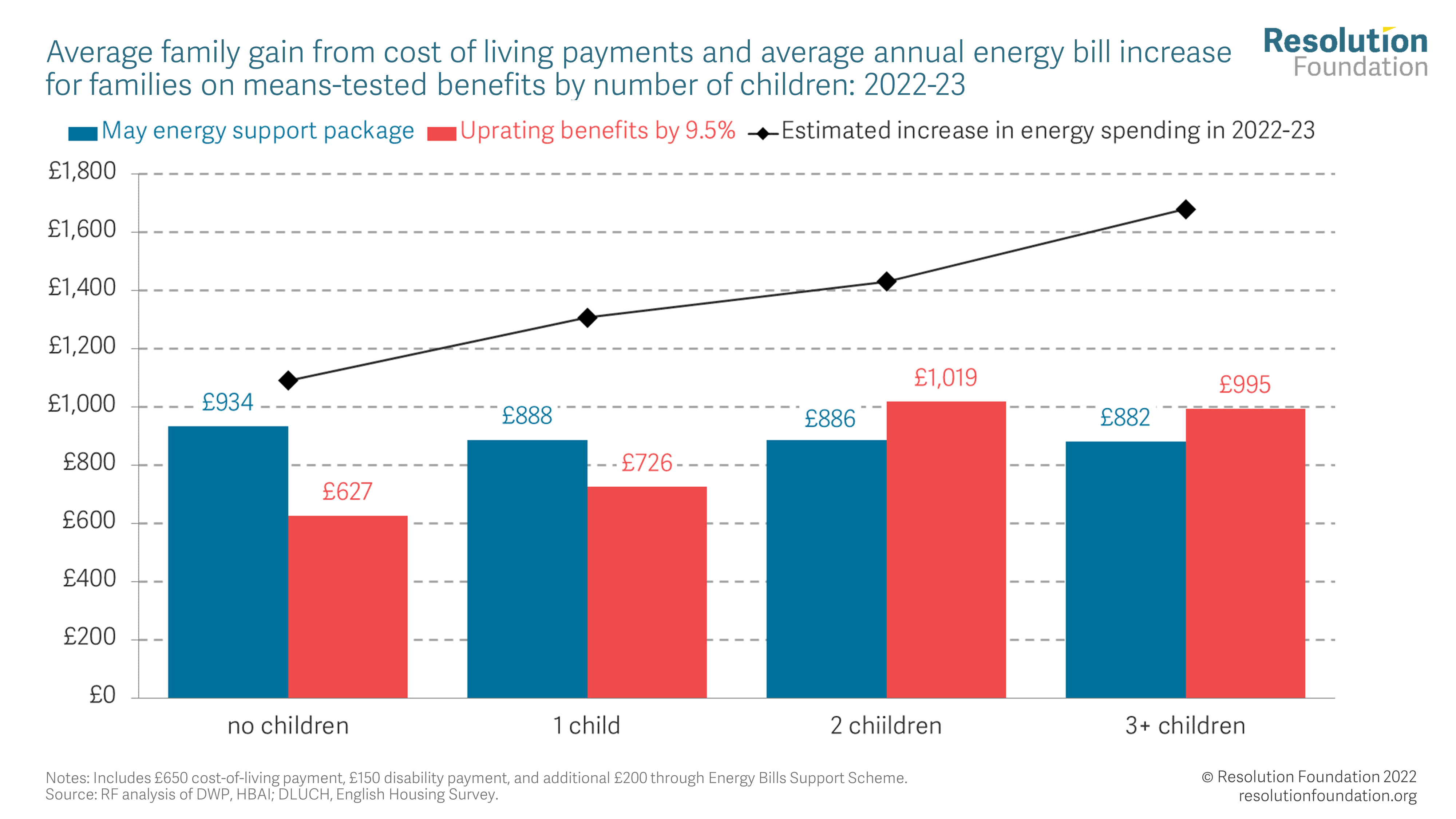 One-off payments may be the best way to deliver emergency support, but are not the ideal way to operate the UK’s safety net benefits. The major problem is that it introduces sharp cliff edges between those who are receiving benefits on the cut-off dates and those whose claim begins just after, and between those who are entitled to very small amounts (who still receive the full £650), and those who have slightly too much earnings or slightly too much in savings to be entitled to a means-tested benefit who receive nothing. For example, over the last year the number of people on Universal Credit that have been claiming for less than three months has been between 400,000 to 470,000. This suggests that by providing support to benefit recipients in one-off payments, between 130,000 to 160,000 claimants a month may miss out on support because they start a claim after eligibility for the second one-off payments passes.

Importantly, the Chancellor confirmed that the Government intends to keep to the usual rules for uprating benefits in April 2023, increasing them by September’s value of inflation, and returning to the triple lock for uprating the State Pension. On current forecasts, this means that most benefits and the State Pension are set for an increase of around 9.5 per cent, the largest increase since 1991, and at an expected cost of around £15 billion. Of course, this large increase is needed to return the real value of benefits to broadly where they were in November 2021, as we show in Figure 7. So, while one-off payments are providing the protection from higher inflation yesterday, it will be the basic rates of benefits that do so tomorrow.

Figure 7: An uprating of 9.5 per cent next April will return the real value of unemployment benefits to where they were in November 2021 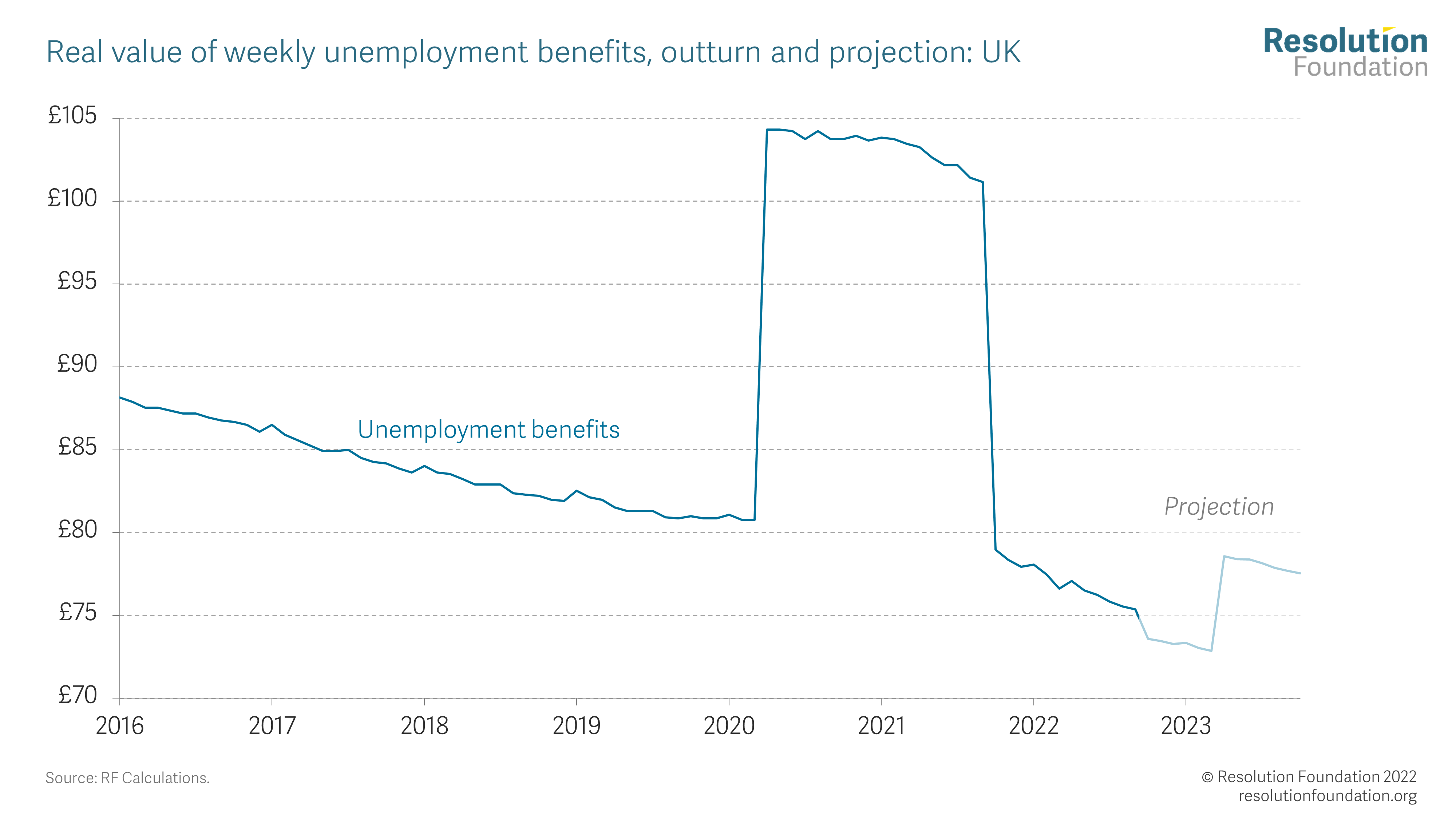 In contrast, more universalist support (through Council Tax rebates or energy bills) falls away in 2023-24, meaning that fiscal policy is (rightly) only trying to delay rather than prevent the impact of rising energy bills for better-off households (the energy price cap itself serves a similar function, delaying the feed through of rising wholesale prices on retail energy prices). The Chancellor’s decision yesterday not to go ahead with a £40 a year surcharge on electricity bills in the five years beginning 2023 means Government is no-longer planning on adding to that problem.

Yesterday’s response was a major package of support for household living costs, nearly doubling the help that had been announced this Spring. Alongside its scale, the defining feature of the support announced is that it is well targeted – filling the big gap left by the Chancellor’s previous announcements’ failure to provide sufficient support for those on lower incomes who are worst affected by surging energy bills. The winter ahead will be a long way from easy for poorer households, but it will be a lot less grim as a result of yesterday’s package.

[1] The Chancellor also announced that these payments would no longer be offset by a compulsory surcharge on energy bills of £40 a year over the following five years, as he had previously announced in February 2022.

[2] This measure applies in England only, but the Welsh and Scottish governments have announced that they will follow. Our modelling is UK-wide, as yesterday’s measures apply across the UK.

[3] There was also a £500 million increase to the Household Support Fund.

[4] This calculation uses figures from the English Housing Survey that account for households’ energy needs. We assume that energy spending in Wales, Scotland and Northern Ireland follows these patterns.

[5] For an uprating to be more generous the Chancellor would have had to increase benefits by more than 9.5 per cent in the autumn and then cut them in cash terms in April 2023. This would be complex and undesirable.

[6] Figure 5 shows the average value of support that each family receives. If income is measured at the household level, then average support per household is higher because in some cases multiple families can live in the same household.