The short-lived attempt to set economic policy as if we were leaving the pandemic behind us is over, with the Government announcing that it will pay two-thirds of wages of employees in firms forced to close because of national or local restrictions. This will provide much needed support, saving many jobs in the hospitality and leisure industries. It paves the way for new restrictions to be announced in the next few days.

Today’s announcement is a furlough scheme. By removing requirements to work some hours and for a significant employer contribution in the Job Support Scheme, the Chancellor has in fact just recreated the Job Retention Scheme. But this time it pays only two-thirds of wages compared to 80 per cent, and crucially has significantly tighter eligibility by sector and geography with the focus only on firms that are forced to close.

The costs of the scheme will depend on the nature and durations of restrictions that are imposed in the coming months and, in turn, on the progress of the pandemic itself. We estimate that if all hospitality businesses in local authorities that currently have some form of additional restriction are asked to close that could see as many as 440,000 hospitality employees using the scheme in early November. If this were to last for six months it would cost £2.4 billion.

The scheme will provide much higher levels of income protection for workers in shut down businesses compared to the income they would otherwise receive on benefits, but delays in announcing this scheme mean it comes too late for many workers that firms have already let go.

Economic policy more generally needs to return to being on the front food in this pandemic. The Government should reduce the Job Support Scheme employer contribution for all firms, encouraging them to cut hours rather than jobs, and ensure workers can isolate when asked to by extending support to the seven in eight currently not covered.

The Chancellor’s decision to announce an “expanded Job Support Scheme” is the right one. With cases rising in much of the country and new economic restrictions set to be announced early next week, the need for economic support for business that are required to shut down – and the employees who work in them – is clear.

The new scheme is restricted to businesses mandated to close by any of the four national governments in the UK. Currently this would only apply to a limited number of firms who are currently required to be entirely closed, such as pubs in the central belt of Scotland and nightclubs across the UK. But it is being announced today in order to support parts of the hospitality and leisure sectors in Northern England where tighter restrictions are expected to be rolled out on a geographical basis in the coming days.

This scheme for shut down firms is however, much more similar to the Job Retention Scheme (JRS) that is set to end on 31 October than to the scheme the Chancellor is claiming to have “expanded”. By reducing employer contributions towards wages in the Job Support Scheme (JSS) to zero (with the exception of Employer NI and minimum auto-enrolment pension contributions), and by ending the minimum hours requirement (at 33 per cent of usual hours in the JSS), the Chancellor has recreated the JRS in its original March form in all-but-name, as Figure 1 shows.

Figure 1: The “expanded JSS” looks a lot like the March JRS 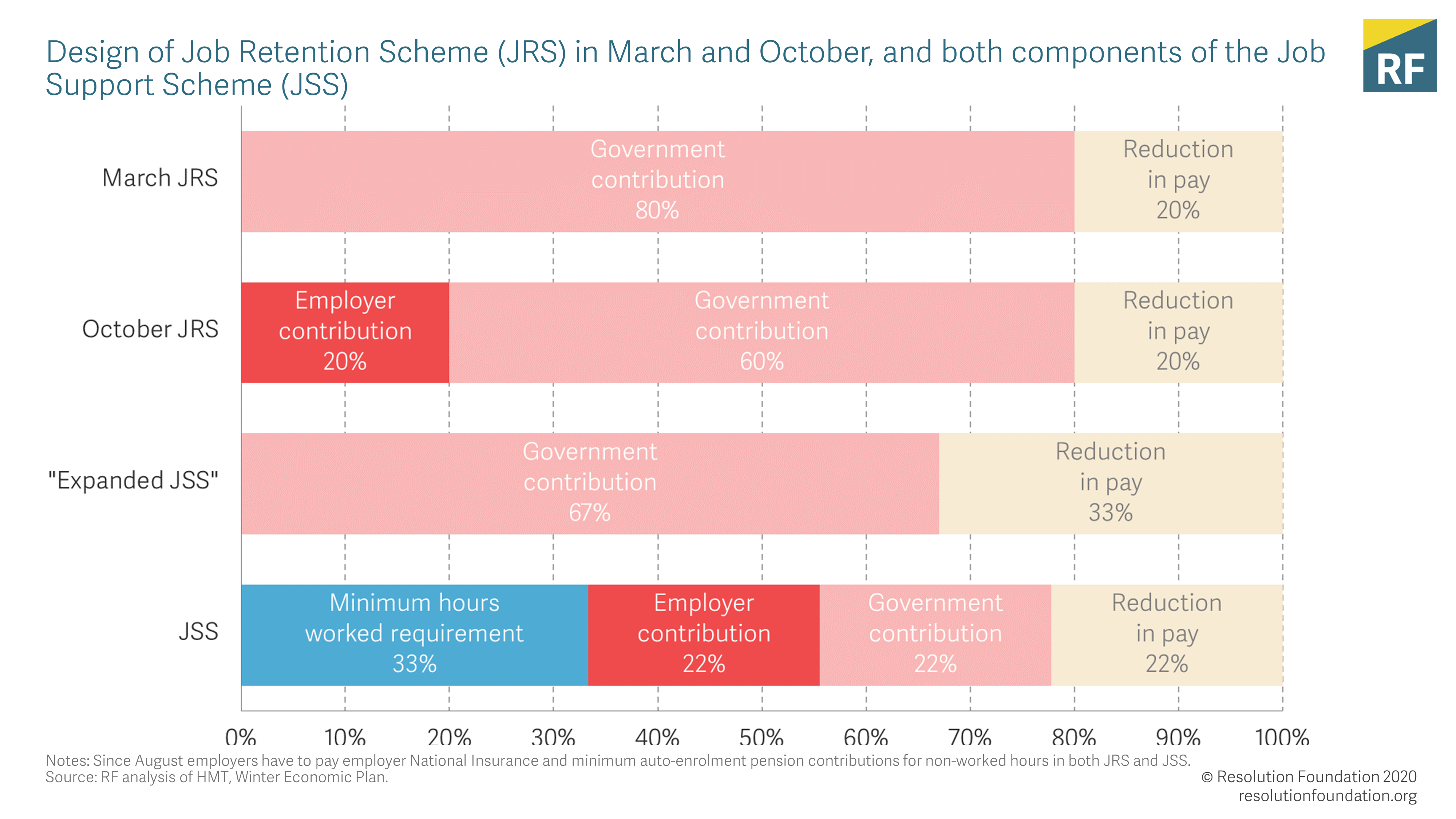 The proportion of an employee’s pay covered by the scheme is lower than in the first wave, with a gross replacement rate of 67 per cent, as compared to the Job Retention Scheme’s 80 per cent. However, a 67 per cent replacement rate is broadly in line with similar short-time work schemes in other European countries, as shown in Figure 2.

Figure 2: The JSS is broadly similar in generosity to other European short-time work schemes 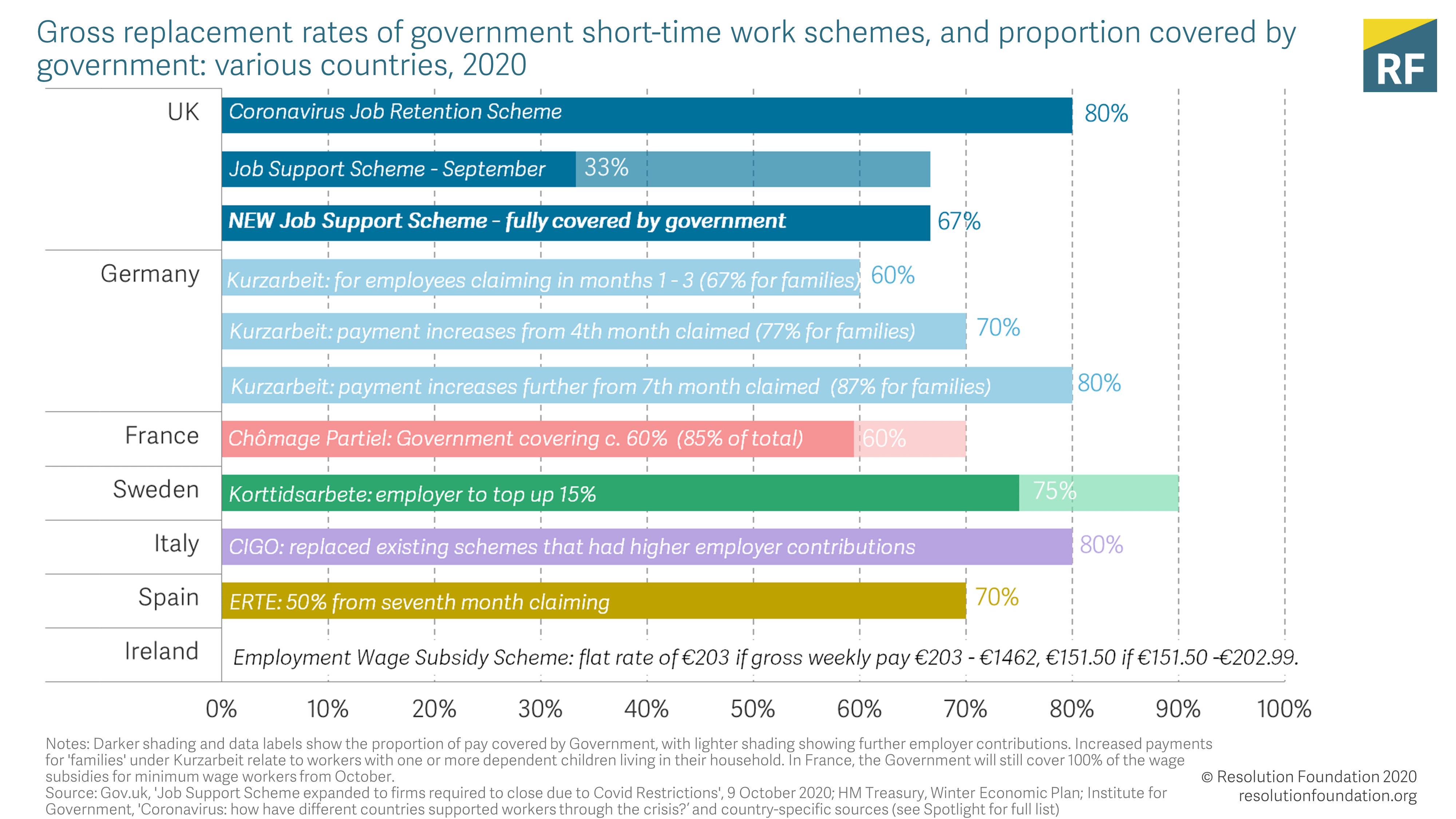 A two-thirds replacement rate is only slightly lower than the replacement rates of schemes in Italy and Spain, and similar to levels of Government support in France and Germany. For example, the proportion of their normal wage a worker on the new Job Support Scheme receives is identical to that initially received by workers with a dependent child in Germany under the Kurzarbeit scheme.

The shift away from employers making large contributions towards pay for hours not worked brings the UK much closer to other European schemes in generosity – and in line with Germany and Italy where governments continue to cover the full value of short-time work payments. However, it should be kept in mind that the Job Support Scheme is far narrower in scope than many of the European schemes below, which apply to a much wider swathe of the economy, rather than just sectors that have been officially ‘shut down’ by government restrictions.

This level of generosity will still go a long way towards protecting people’s incomes during the next part of this crisis. As Figure 3 shows, a single adult normally earning around £30,000 per year, will see an income replacement rate of 70 per cent on the new scheme after tax is taken into account. Although this is less generous than the original furlough scheme – which had a net income replacement rate of over 80 per cent – it is much more generous than the welfare system which would only replace a fifth of the newly unemployed worker’s lost income. 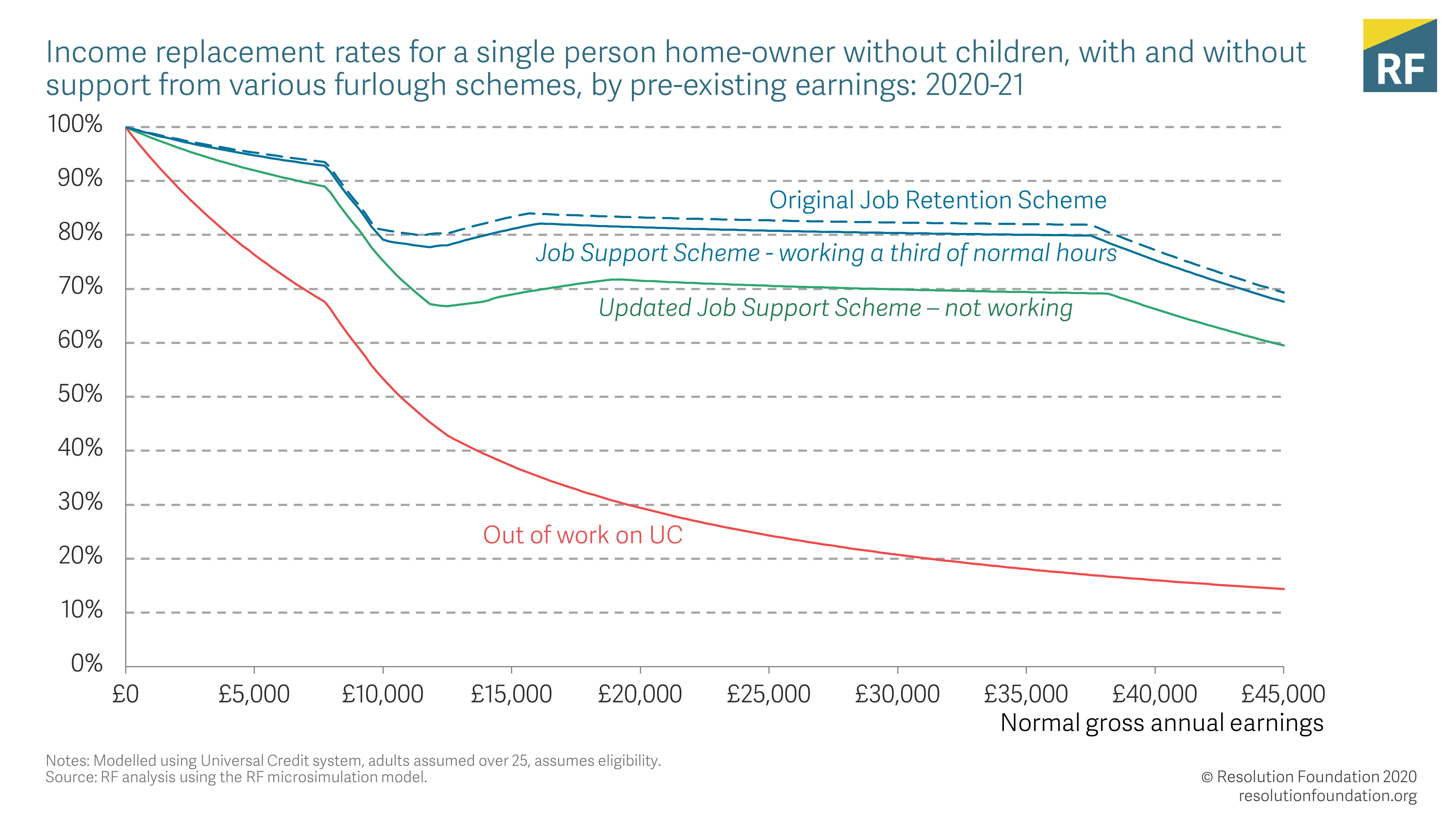 It is worth noting that in total take-home earnings terms, the Job Support Scheme is less generous for workers who stop working compared to those who work a third of their hours under the Job Support Scheme for businesses who have not been mandated to close. However – and this is critical – because the extension of the scheme requires only limited contribution from the employer, it makes it much more likely that the employee will actually be placed on the scheme – and therefore much less likely to see the significant drop in income that comes with unemployment and relying on benefits.

This difference means we will see some very rough justice in the months ahead. Many firms that are partially open, and wrestling with the challenges of doing business during the pandemic, will find it harder to keep paying staff than those that are entirely closed. We will also see some firms that are not legally required to close but are in practice unable to open receiving no support for staff wage costs, while significant support exists for those required to close by national or local lockdowns.

The scale and cost of this scheme depends entirely on lockdowns to come, but if it ended up supporting 440,000 hospitality employees’ wages it would cost £2.4bn over six months

There is still considerable uncertainty around the scope of future lockdown measures: the Government has not yet specified which businesses will be asked to close, which areas of the country will be affected, or how long measures will last for. And in practice decisions on both of these are likely to change over time, and between the nations of the UK (for example theatres are currently legally required to close in Scotland and Wales, while in England they in theory can open but in many cases have been unable to do so). But to illustrate the possible reach of the support announced today, we model a scenario where the government mandates the closure of businesses in the food and beverage services sector (including pubs, cafes and restaurants).

As shown in Figure 4, we estimate that if this were to affect only those areas currently under some form of local restrictions – which are reasonably likely to be first in line for such closures – the scheme would cover more than 400,000 jobs across England, Scotland and Wales. If we were to enter another national lockdown, 1.6 million jobs would be in scope.

Figure 4: More than 400,000 hospitality employees in local lockdown areas could be covered by the scheme 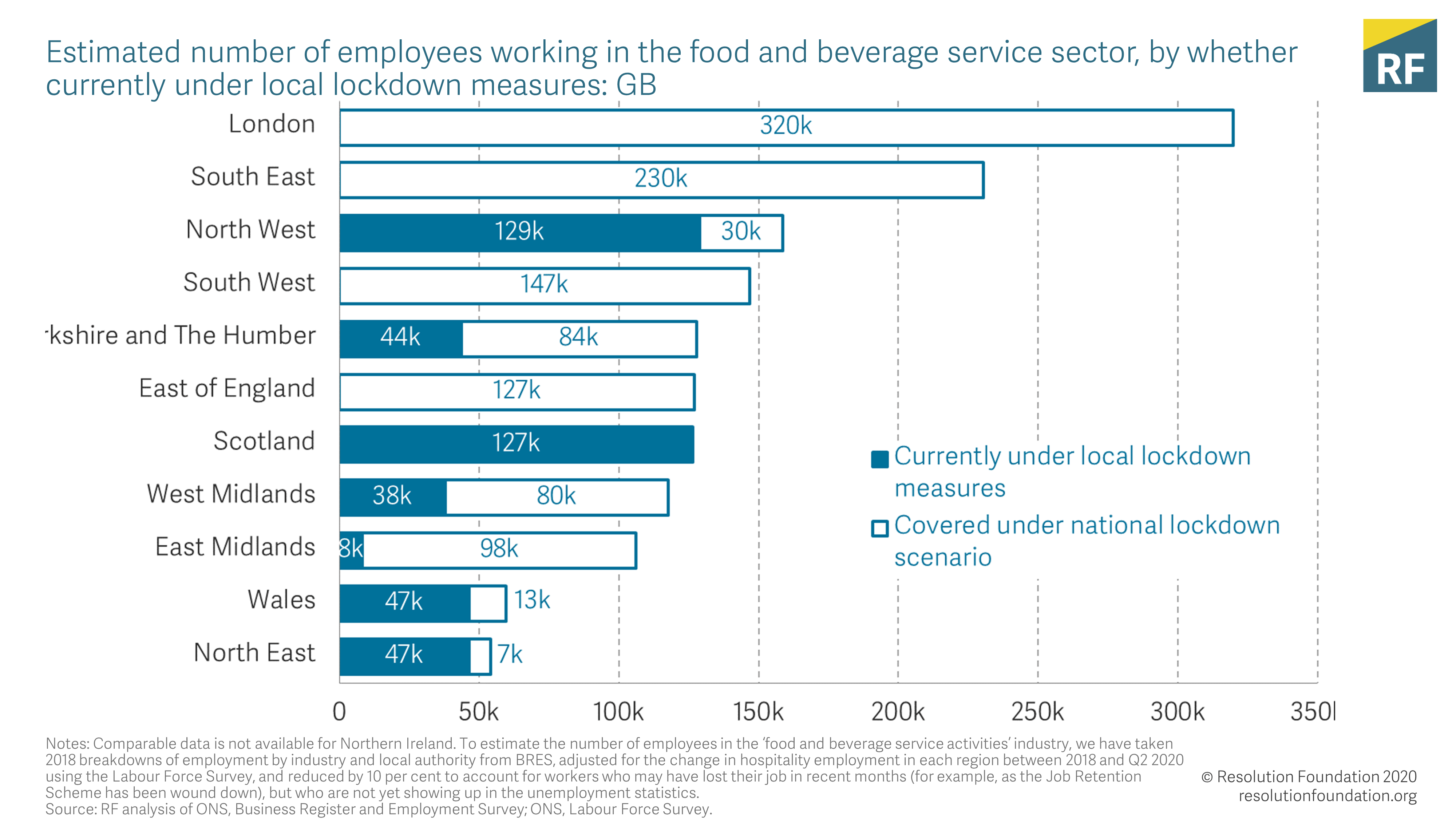 These indicative figures imply that the cost of this targeted scheme is set to be much lower than the cost of the furlough scheme, the cost of which had ran to £39.3 billion by 20 September.  Taking the average wage in hospitality and leisure, we estimate it could cost around £400 million a month, or £2.4 billion for six months, if used for 440,000 employees (see Figure 5).

Figure 5: This new scheme’s cost is heavily dependent on how far across the country restrictions on business activity spread 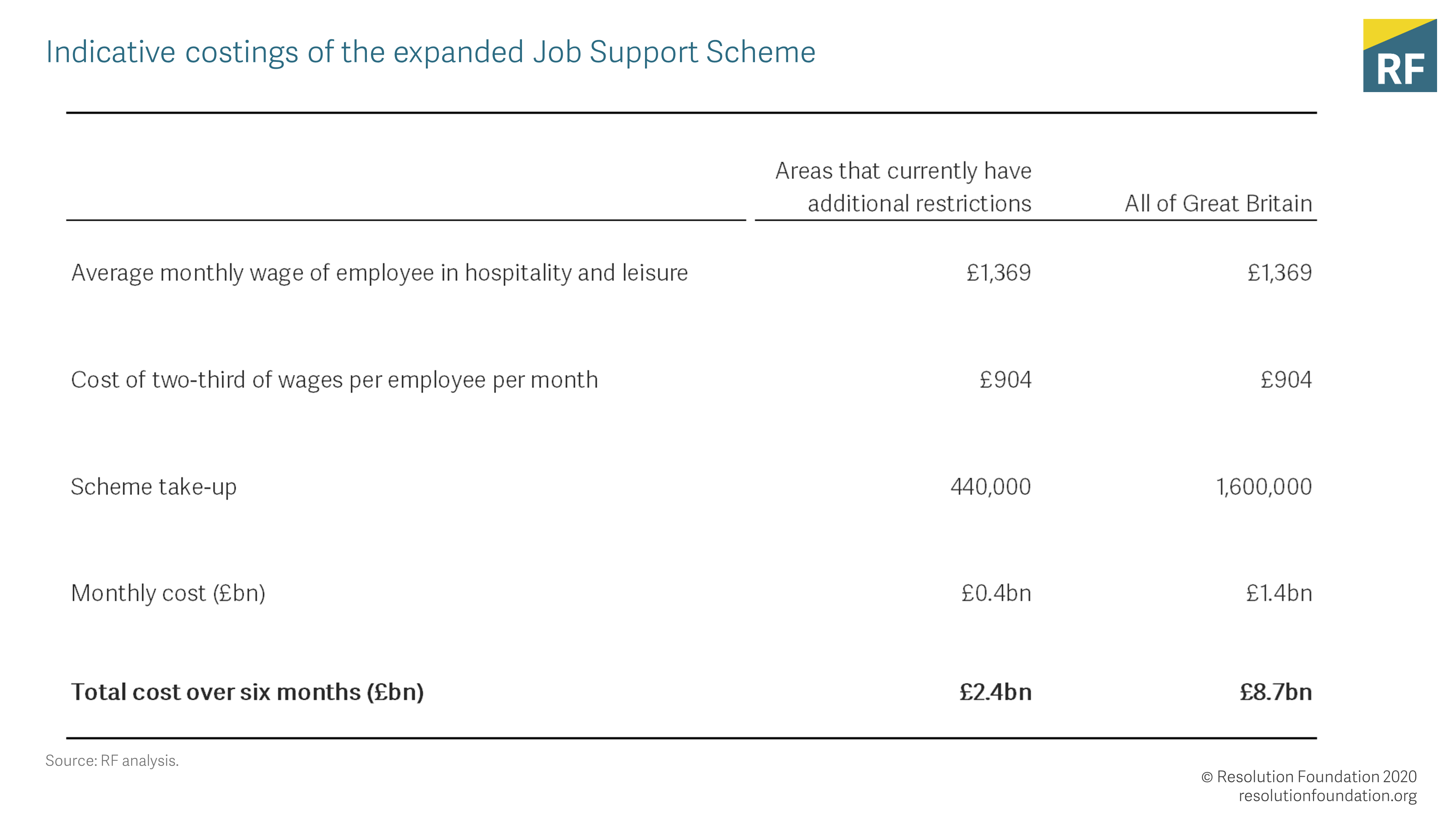 Today’s announcements are welcome, and will protect many hospitality and leisure jobs in the months to come – but broader challenges with the wider response remain

Although the expanded JSS will protect jobs in firms that are forced to close due to restrictions, challenges with the broader economic response remain. These should be addressed to put economic policy back on the front foot in trying to contain both the spread of the virus and rise in unemployment.

First, the JSS for non-shutdown businesses still needs reform. It does not incentivise the short-hours working within viable businesses that was the stated reason for its introduction. For those businesses that are just hit by reduced capacity – or reduced demand – they are asked to pay a third of the wages for hours when an employee is not working. This gives them very little incentive to cut hours rather than jobs – something that should be a central objective of economic policy over this winter. The Government should abolish the poorly targeted Job Retention Bonus and plough the money into reducing the employer contribution in the JSS instead.

Second, there is a strong case for extending the support for isolating workers beyond the one in eight who currently qualify, to ensure that financial support ensures people do isolate when required to do so and therefore help prevent the spread of the virus. This could be done by increasing the generosity and coverage of statutory sick pay or widening eligibility for £500 grants that the government is currently targeting on those receiving benefits.

Third, because of the low income-replacement rate for many people relying on benefits, it is vital that the Government does not go ahead with the planned cut to Universal Credit by £20 per week in April. Otherwise this cut will cause incomes of the poorest households to fall by as much as 7 per cent. Cutting benefits for millions of families at a time of rising unemployment is a bad idea.

The Government has taken a wise step today towards averting further job losses in the coming months. But it must do more for those who have to isolate, those who are otherwise facing redundancy, and those who have already lost their job in this crisis. By doing so economic policy can cease to be dragged along by events and return to the front foot. It is crucial that it does so.