All the data in this Housing Outlook is available to view on our interactive data dashboard.

Welcome to the first publication of the Resolution Foundation’s Housing Outlook. As we enter a new decade in which both the politics and economics of housing look set to be centre stage, this quarterly publication will be tracking all the key trends as the 2020s unfold. We will be keeping an eye on the housing market, and the way that housing intersects with both living standards and policy developments. This quarter, we begin with a look at house prices and ask whether the ‘levelling up’ we observe across the country since 2016 is at an end, or if the process still has further to run.

House prices have ‘levelled up’ across the country since the vote to leave the EU… will it last?

The long-run story of the UK’s housing market is a widening gap between prices in different parts of the country (think the North East compared to London). But all stories have to end. Since mid-2016, house prices in the nations and regions of the UK have stopped diverging, and instead have ‘levelled up’ to a significant degree. Has this levelling up run its course, or does it have further to go?

The figure below shows the scale of the UK’s post-referendum regional house price convergence. There has been a clear inverse relationship between the scale of price rises in each region and the level of prices
in that region to begin with. For example, the average house price has risen by just 0.5 per cent in Inner London since mid-2016 (just £2,700 in cash tems), while in the West Midlands house prices have
risen by almost a quarter (equivalent to £36,000). 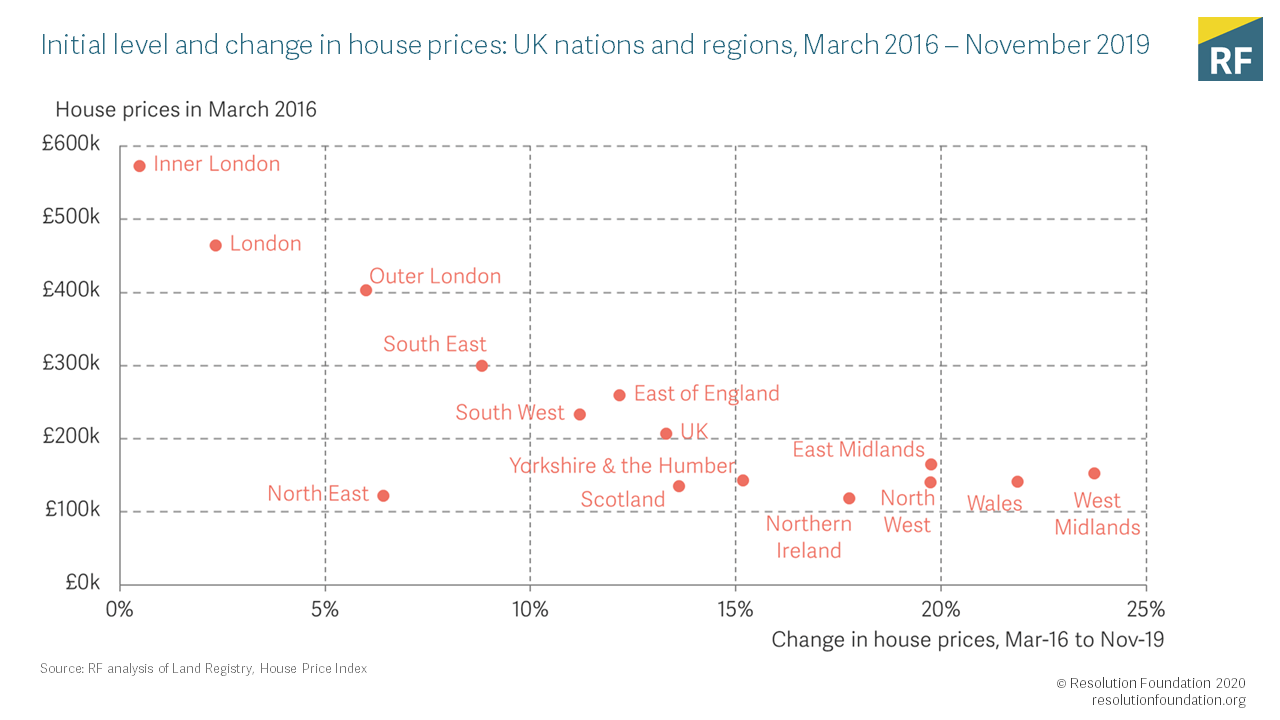 As a result, the gap between house prices across the nations and regions of the UK – while still huge –has shrunk by some way. London house prices are now ‘just’ twice as high as the UK average, back to
the ratio last seen in March 2014 (see figure below). This is the biggest fall in London prices relative to the UK average in cash terms on record, and means that house prices in the capital are £51,000 lower than
they would have been had they grown at the same rate as the UK as a whole since March 2016. 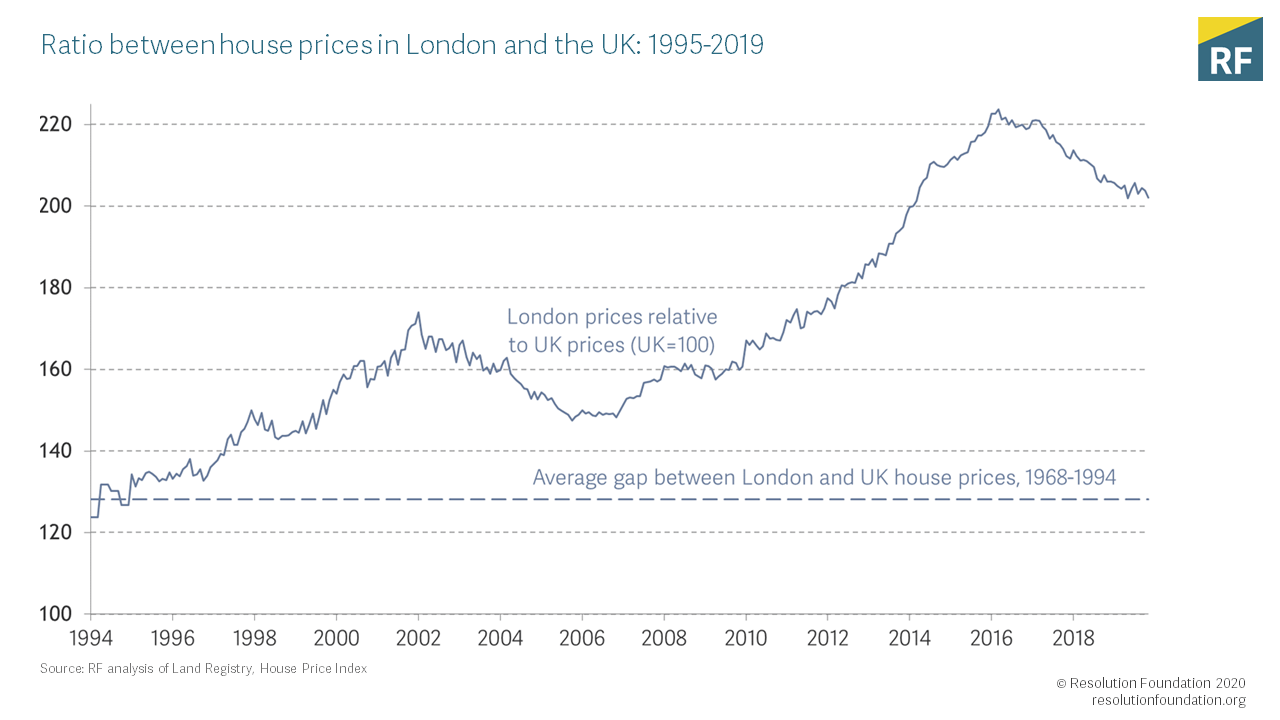 Of course the flattening of London house prices does nothing to change the fundamentals that home ownership in the capital remains far from affordable for those on low-to-middle incomes. The average first-time buyer deposit in London is still in the region of £140,000.

Those seeking to explain this convergence often focus on a simple story about international property investors holding back in more expensive areas of the UK in the aftermath of the 2016 referendum. But a more useful answer comes from digging deeper into both the period before 2016, when regional house price gaps grew significantly, and the last three years. As Figure 2 also shows, between 2006 and 2016 the ratio between London and UK prices increased from 150 per cent to almost 225 per cent. The South East and Eastern regions have also pulled away. So, what was driving up London house prices relative to the rest of the country over this period?

One big determinant of house prices that we can rule out straight away is interest rates. Even though they are crucial in driving big increases in house prices across the country as a whole, they cannot
account for regional divergences. After all, rates are the same across the country. One driver that does vary across the country, however, is how many people want to live in each place – and London proved to be an attractive location for those born overseas in particular. The share of London’s population born outside the UK grew from 32 to 38 per cent over the decade to 2016 – more than in any other part of the country. An additional 850,000 non-UK born residents made the capital their home in the decade to 2016.

Overall, the number of family units (each comprising an adult, any partner and any dependent children – and a better measure of demand for housing than either the number of households or individuals)
grew by 9 per cent across Great Britain between 2006 and 2016. In London the increase was 13 per cent, faster than in any other region of the country. Critically, housing supply in the capital has not kept pace with this increased demand, growing by 9 per cent over the same time period. As a result, the ratio of dwelling stock to family units in London has fallen much more steeply than elsewhere. In
2006-07, we estimate there were 792 properties per 1,000 family units in London. By 2016-17 there were just 755 (see our interactive indicators for the full data).

This ratio can help us make sense of other regional price variations too. Take the West Midlands, a region that had a typical properties/family units ratio in 2006-07 of 845 per 1,000. Today it has one of
the lowest in the country (826 per 1,000), and is experiencing fast house price growth. In contrast, the ratio in the North East has changed little since 2006-07, and house price growth has been weak here.
Of course, other things will have contributed to regional differences in house price growth. For example, while there hasn’t been large variation in income growth across regions, differential changes in living standards will have had an effect on housing demand. The changing composition of regional populations also matters to the extent that it leads to more people with a preference for ‘multiple family unit’ living residing in certain areas.

But overall, a classic mismatch between the number of people and properties looks to have been a key driver of regional house price divergence in the decade up to 2016. This argument is confirmed
when we look at private rents. London’s rents increased by 36 per cent between 2006 and 2016, twice as fast as in almost every other region of the country.

The EU referendum is clearly the pivot point for this ‘levelling up’, but what exactly is driving it? The common refrain of heightened uncertainty cannot be the key driver of differential changes across the
country, since (as with interest rates) it is a national phenomena.

Again, population trends give us a more grounded understanding of changes in demand. The number of family units in London is now growing at half the pace it was pre-2016, at 0.6 per cent a year
compared to 1.2 per cent. Critically, London has flipped into being the place in which the non-UK born population share is falling the fastest – down from 38 to 37 per cent since 2016. In contrast, the
overseas born population in the West Midlands is continuing to grow – up by 1.6 percentage points as a share of the population over the last three years.

This demographic shift is also driving relative rent changes – which underpin the convergence of house prices. Since 2016 rents have also been converging, with London rents growing slower than in
all other UK regions bar the North East.

To decide whether the process of levelling up may have further to run, we can take a closer look at the gap between increases in private rents and house price growth. Across England, prices increased 70
per cent faster than rents between 2006 and 2019. We can apply this to changes in rent in each region to get a sense of how big the mismatch in regional house prices are. In doing so, we also produce a ‘hypothetical’ house price growth figure for each region (see figure below). 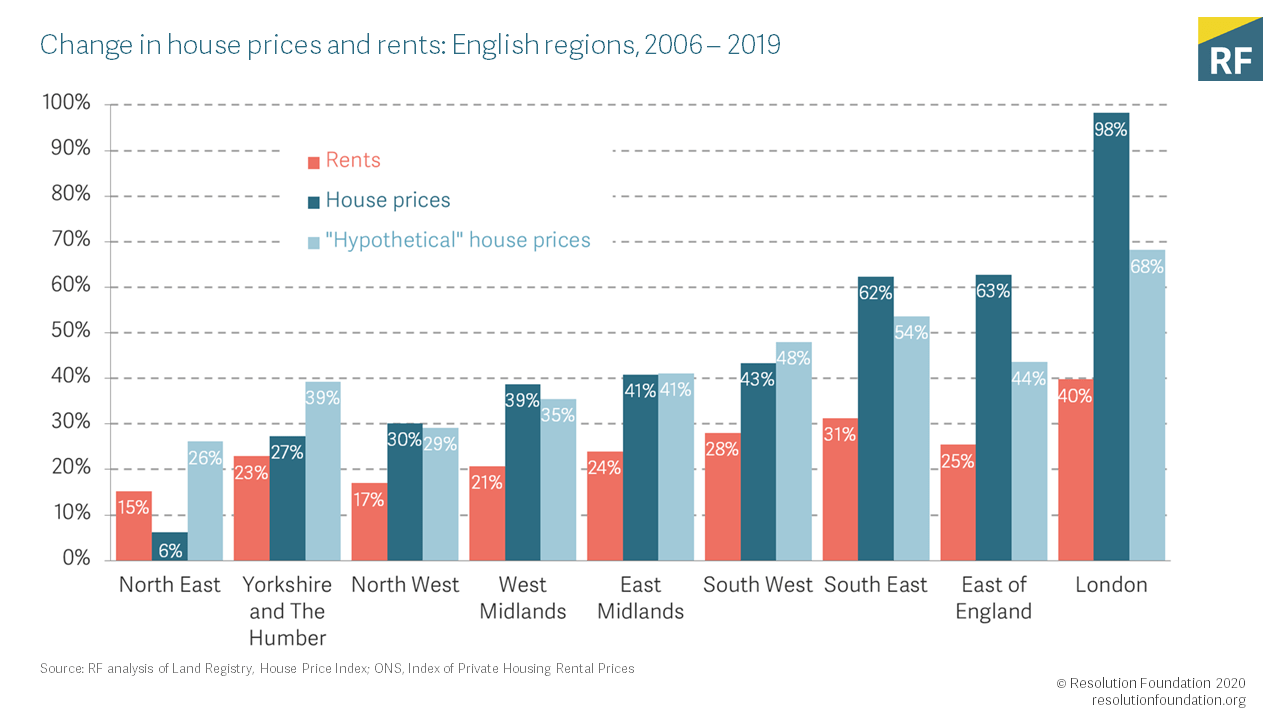 This hypothetical house price figure is not a projection for precisely how prices will change in the months and years ahead. But it does provide a guide to the extent to which prices may be underor over-valued in different parts of the country. It implies that in places like the North East and Yorkshire there is scope for significant further relative house price growth. In London however, the
fundamentals suggest the opposite – further relative falls (but not necessarily actual house price falls) may be on the cards.

This evidence suggests that the process of narrowing house prices across the country may have further to run. Of course it does not tell us about the sustainable absolute level of house prices. But
despite the improvement in sentiment following the election result and the partial closure on Brexit, our analysis suggests that London’s housing market isn’t about to rapidly heat-up again. On house
prices, if nothing else, there are grounds for hoping the new government might see the levelling up they’re looking for. Time will tell, and we’ll be tracking this house price gap – and a range of other indicators – in future quarterly publications of our Housing Outlook.

Stakes and ladders
The costs and benefits of buying a first home over the generations
·
Lindsay Judge, Jack Leslie
Housing Outlook Q2 2021
The impact of Covid-19 on housing demand across the UK
·
Lindsay Judge, Cara Pacitti
Getting ahead on falling behind
Tackling the UK’s building arrears crisis
·
Lindsay Judge
Back to top