In Housing Outlook this quarter, we consider how Covid-19 has affected housing demand across the UK. In the absence of good rental data, we look below the surface of rising house prices, and consider the impact of home working and lockdowns, as well as Government policy, on housing preferences.

Studies for the US suggest that the pandemic has precipitated significant ‘urban flight’, with housing demand shifting from city centres to less densely populated areas. We find some evidence of this phenomenon here in the UK: local authorities with the fewest residents per square kilometre saw prices rise by 10 per cent over the past year, compared to 6 per cent in the most populous. We show that this is not just a London effect: cities across the UK have seen slower growth in house prices than rural areas suggesting a reduced preference for urban living. However, the real question is whether we are likely to see a lasting impact on the housing market. We see some tentative evidence that those able to work from home are taking advantage of this flexibility to move to locations outside large conurbations. But policy also looks to be a crucial driver behind these trends. The Stamp Duty holiday has clearly had a stimulus effect on the market as a whole, and plausibly has driven up the value of houses relative to flats because it benefits ‘second steppers’ rather than first-time buyers, who were largely Stamp Duty-free even before its introduction.

Despite the most significant economic contraction in a generation, house prices have boomed during the Covid-19 pandemic – making this a very odd recession. However, it is not just the scale of demand for housing that has generated debate, but whether the nature of that demand has changed too. There has been much chatter in recent months that Covid-19 has encouraged ‘urban flight’, with buyers looking to move from cities to less densely populated areas, and to housing types with more space. More concretely, researchers in the US have found evidence from both rental and house price
data that demand had shifted away from American city centres, towards the leafier suburbs that surround them.

So, can we see any evidence that Covid-19 has changed housing preferences in the same way here in the UK? In Figure 1 below, we look at increases in house prices since the onset of the pandemic, splitting the UK’s local authorities into deciles by their population density (the number of people per square kilometre). We find that, while prices have rocketed across the board, there has been a more significant jump in the least dense deciles of the UK, with areas that have higher population density lagging behind. Since February 2020, house prices have risen by over 10 per cent in the least populous tenth of local authorities in the UK, compared to rises of ‘only’ 6 per cent for the highest density decile. This is a significant departure from the pre-crisis trend, with price growth by density decile varying little in the year to February 2020 (and prices in the lowest density areas actually falling in the run up to the pandemic).

Figure 1: House prices have risen faster in less populated areas of the UK than denser areas over the Covid-19 period 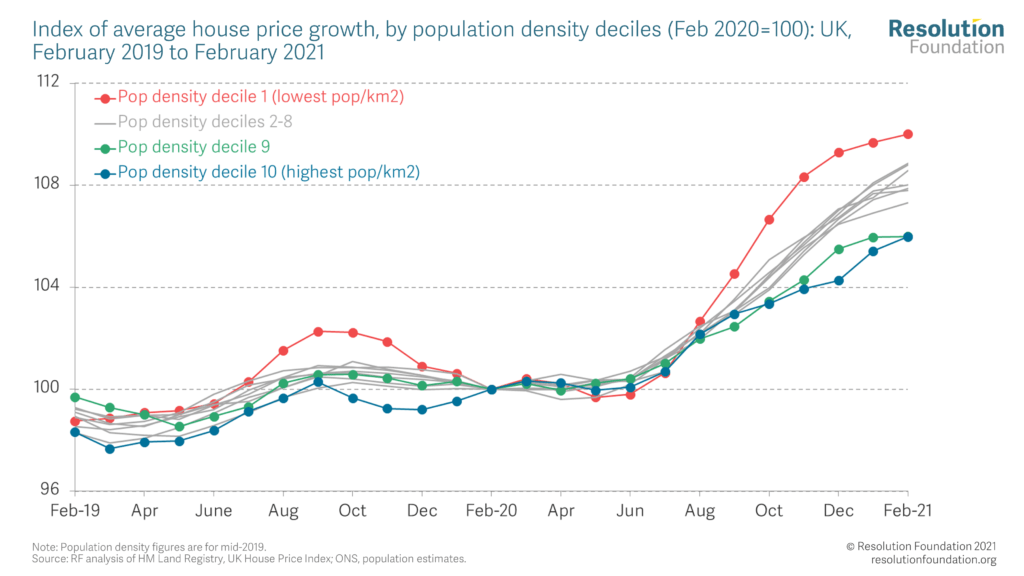 But is Figure 1 just another way of illustrating differing housing trends across the UK’s regions? Regional variation in density is large across the UK: the London region contains every single one of the UK’s top twenty local authorities ranked by density, for example, and has faced the biggest regional employment hit over the pandemic period. If we exclude London from our analysis above, the findings still stand, albeit with a slightly larger rise for the densest decile (7 per cent rather than 6 per cent). And looking just within the capital, house prices in Outer London rose by 7 per cent since February2020, compared to only 2 per cent on average for local authorities in denser Inner London.

In addition, switching to a different metric and breaking down local authorities by rural and urban groupings that cut across regions of the UK also makes clear this trend goes beyond the capital. Figure 2 charts house prices changes using a categorisation that allocates local authorities to a city,
town or village group according to the type of settlement in which the largest proportion of their population resides. As this makes plain, there has been lower relative demand for housing in ‘core’ cities such as Manchester, Birmingham, Liverpool, Glasgow and Cardiff in the pandemic period. The average house price rise for local authorities containing residents of the UK’s twelve most prominent cities was 6 per cent. However, price rises for more rural areas where most residents lived in small towns or villages were significantly higher, at 9 per cent. Again, this diverges from pre-pandemic trends, with the year to 2020 seeing little spread by rural and urban classification.

Figure 2: Prices have risen faster in rural areas compared to major cities during the pandemic 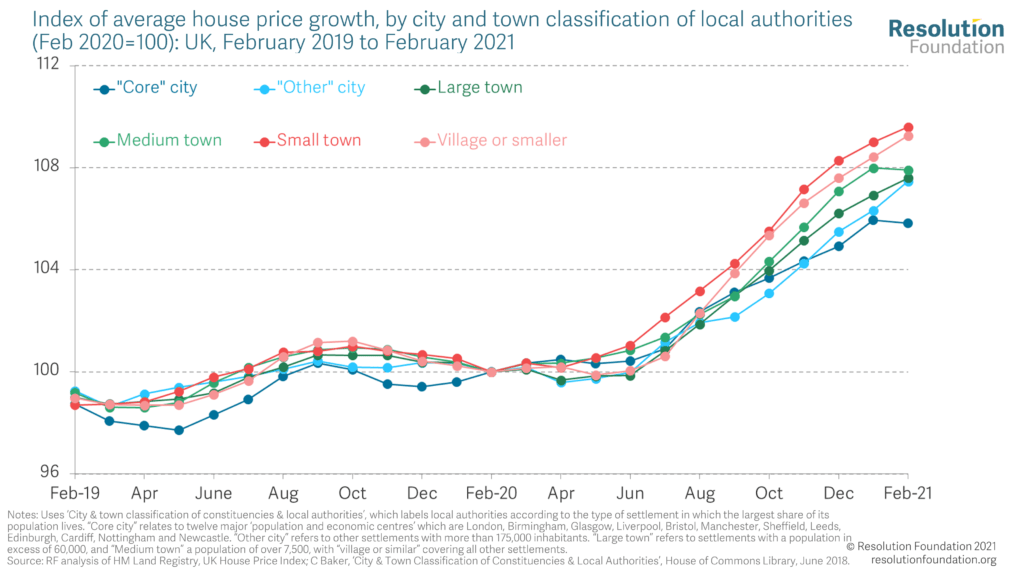 As a result, we conclude that over the past year there has been something of a shift in housing demand away from cities and towards more rural, or at least less densely populated areas of the UK. So, who is behind this trend? Research from the US suggests that recent house price growth has
been weakest in areas that were populated pre-crisis largely by those who are able to work from home (in other words, professionals) and concludes that housing demand has changed as a result of new freedoms in some working lives. This would make logical sense: those able to work from home are most likely to be able to take advantage of this flexibility and move to a more spacious and attractive location. But as Figure 3 shows, we find only weak evidence of that relationship here in the UK. We plot the proportion of a local authority’s workforce that are in managerial or professional roles (which previous work suggests is a reasonable proxy for the ability to work from home), against price rises by local authority. While there is a small negative relationship (i.e. areas with a high proportion of workers able to work from home had slightly lower house price rises), this clearly offers only a partial explanation of current house price trends.

FIGURE 3: There is only a weak relationship between the concentration of those likely to be able to work from home and house price growth in a given area 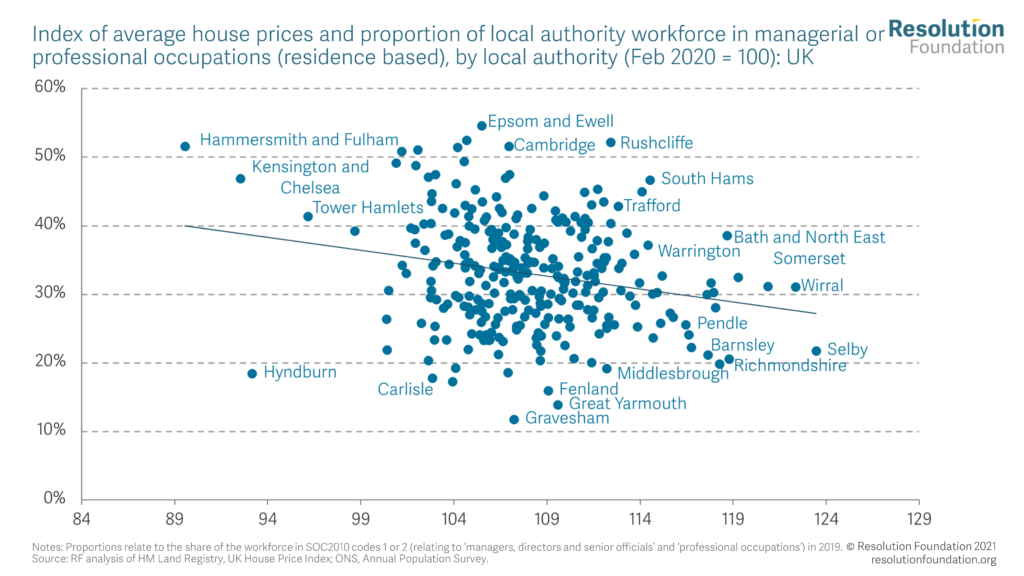 Our final chart provides a further clue as to what could sit behind the differential demand we observe for housing in urban and rural areas. Figure 4 suggests ‘denser’ types of property have also become less attractive over the pandemic period: the average price of a flat has grown by ‘just’ under 6 per cent over the past year, while houses of all types have increased by around 9 per cent. Housing market commentaries suggest that ‘second-steppers’, intent on upsizing from flats in their search for space, are currently powering the market. As we have shown before, this group has been the key beneficiary of the stamp duty holiday announced by the Chancellor in July 2020, and extended through to September 2021 in the Budget earlier this year. In contrast, first-time buyers who by their very nature are more likely to purchase smaller properties, have for the time being lost the tax advantage they had in the market compared to existing owners.

Figure 4: Prices for flats have grown more slowly than other types of property 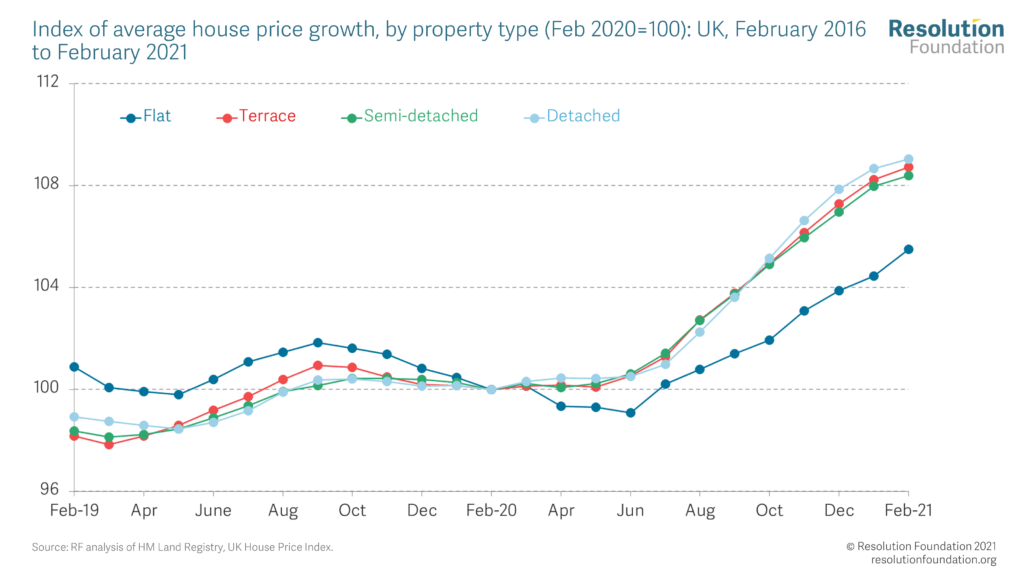 Overall, it is clear that the nature of housing demand has shifted over the pandemic period. However, on current evidence this appears to be been more driven by the differentiated effect of a temporary policy (the stamp duty holiday boosting the purchasing power of those who are likely to want larger homes in less dense areas) than any fundamental change in tastes. It is plausible, then, that this effect will dissipate once the stamp duty holiday ends in September. But if tastes continue to shift towards out-of-city living, and families are able to manifest those preferences, we may see prices actually fall in city centres, benefiting those buyers who continue to value city amenities. Watch this (race for) space.