Welcome to Housing Outlook Q3 2020. In this edition we examine how house prices have behaved in previous recessions, and look set to adjust to the coronavirus crisis. While some might see anticipated house price falls as a potential opportunity for young people to get onto the housing ladder, the Office for Budget Responsibility’s house price scenarios suggest otherwise. We show that the average first-time buyer is in no stronger a position today than before the crisis: house prices may be set to tumble, but so too are incomes, while tighter credit conditions could limit options further. Moreover, the recently announced cut to Stamp Duty has effectively removed one of the few advantages that aspirant home owners had in the housing market. All this leaves the average first-time buyer as reliant on parental or state support as before.

Recessions vary, in depth, length and in their drivers. Given this, it is unsurprising that house prices have often behaved quite differently in periods when GDP has turned negative (see Figure 1). In the early 1980s, for example, real house price growth fell by around 12 per cent and did not return to its previous peak for five years; in the recession of the early 1990s, prices fell by over 30 per cent, and took more than ten years to return to pre-recession levels; and in the late 2000s, when the housing market was not simply a casualty of the recession but was also implicated in the crisis itself, house prices dropped by almost 30 per cent and have since failed to return to the highs of the early 2000s.

Figure 1: While all recessions are different, the OBR’s coronavirus crisis central scenario anticipates a similar initial house-price fall to the 1980s 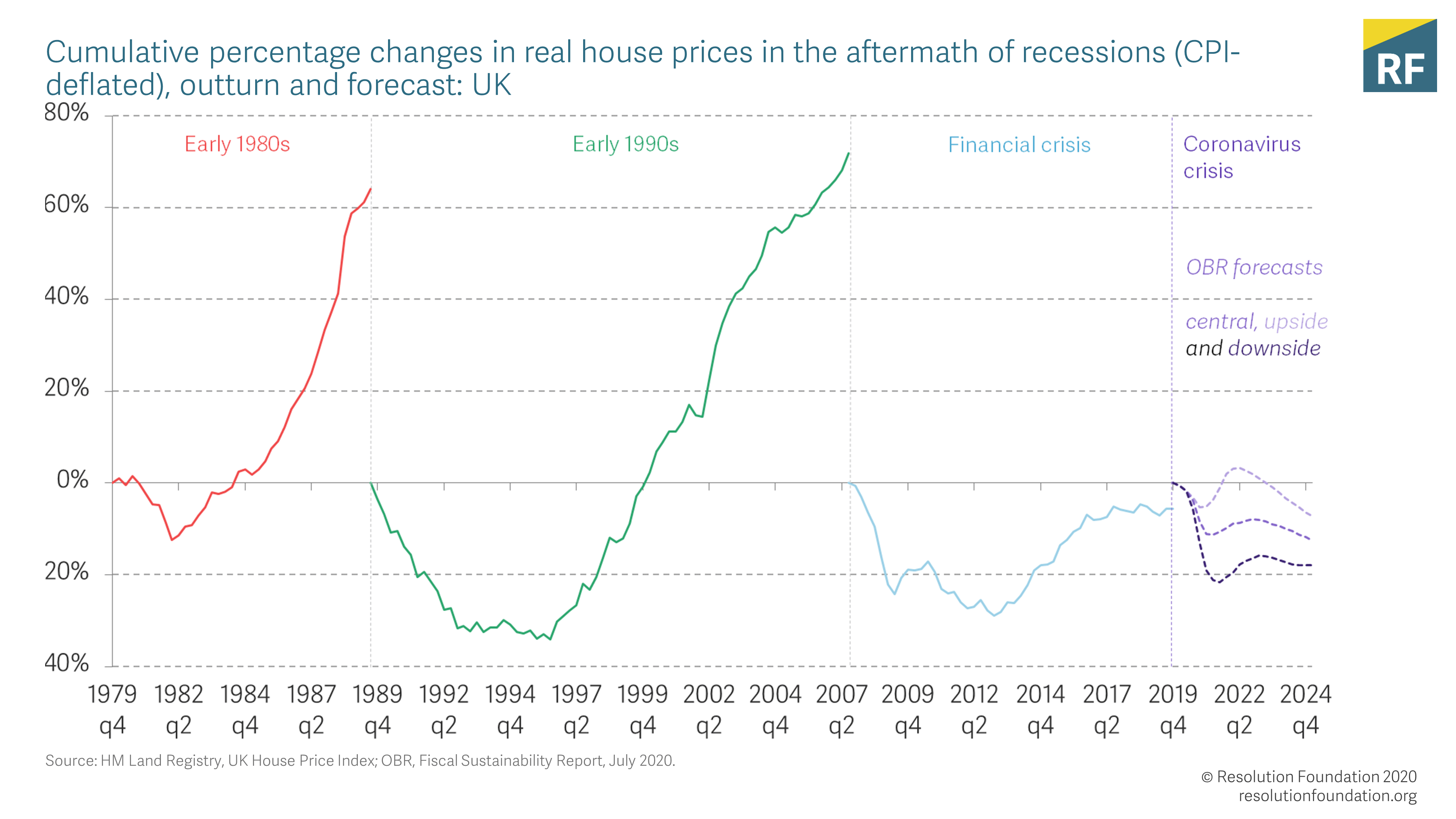 Looking ahead, then, the Office for Budget Responsibility (OBR) has produced three house price scenarios in the wake of the coronavirus crisis (also shown in Figure 1). In their ‘upside scenario’, house prices fall by just two per cent for 2020, followed by a rapid recovery to pre-crisis trend (a relatively tepid one to two per cent nominal growth rate that is surpassed by inflation in 2023 and 2024). Their ‘central scenario’ presents a picture that is initially not dissimilar to the 1980s: house prices fall 5 per cent this year, and cumulatively by 11 per cent by the end of 2021, although unlike the 1980s, they then flatline in real terms to the end of the forecast period. Finally, the downside scenario is more reminiscent of the financial crisis, with a 22 per cent fall in real house prices observed by Q3 2021, followed by a period during which prices remain around 10 per cent below the trend anticipated in March this year.

So what factors will determine the actual path that house prices follow in the coming months and years? The OBR’s scenarios are all underpinned by developments in the labour market. In the upside scenario, falls in employment and inflation-adjusted wages are limited, whereas in the downside scenario, the unemployment rate reaches an all-time high. It is worth noting that in the past, the cost of borrowing has also been an important driver of house prices (indeed, a recent Bank of England report suggests that interest rate falls led to a more than doubling of real house prices since 1985, while household incomes contributed a further 80 per cent). However, with interest rates close to zero, the significant interest rate cuts that boosted house prices during previous recessions cannot be repeated today.

House price shocks are bad for the economy in various ways. They damp down new supply; reduce consumer confidence; and constrain mobility if households fall into negative equity (a topic we will be exploring in depth in a forthcoming paper). But there is one group who might give a quiet cheer to a house price fall and that is aspirant buyers.  As we have shown previously, young people today have a tougher time getting on the property ladder than previous generations. This is less because servicing a mortgage is prohibitively expensive: low interest rates make the ongoing costs of home ownership today relatively light compared to previous generations (even if over their lifetime first-time buyers today have to pay off larger capital sums). The more significant barrier that young people face is accumulating the deposit.

Figure 2 illustrates this point with a simple thought experiment. It shows how long the average first-time buyer family would take to squirrel away enough for a deposit, saving 5 per cent of their income. In the early 1990s, it took four years. But by 2019 that figure had risen to 21 years. Updating this calculation based on the OBR’s scenarios shows the length of time required by the typical first-time buyer family to accumulate sufficient savings to access home ownership falls by less than half a year between 2019 and 2021 in the central scenario (compared to falls of just over one year in the downside scenario, and rises of one year in the upside).  Moreover, there is no enduring reduction in the time required in any of the OBR’s scenarios: in the downside, central and upside cases the number of years to save is higher in 2024 than in 2019. 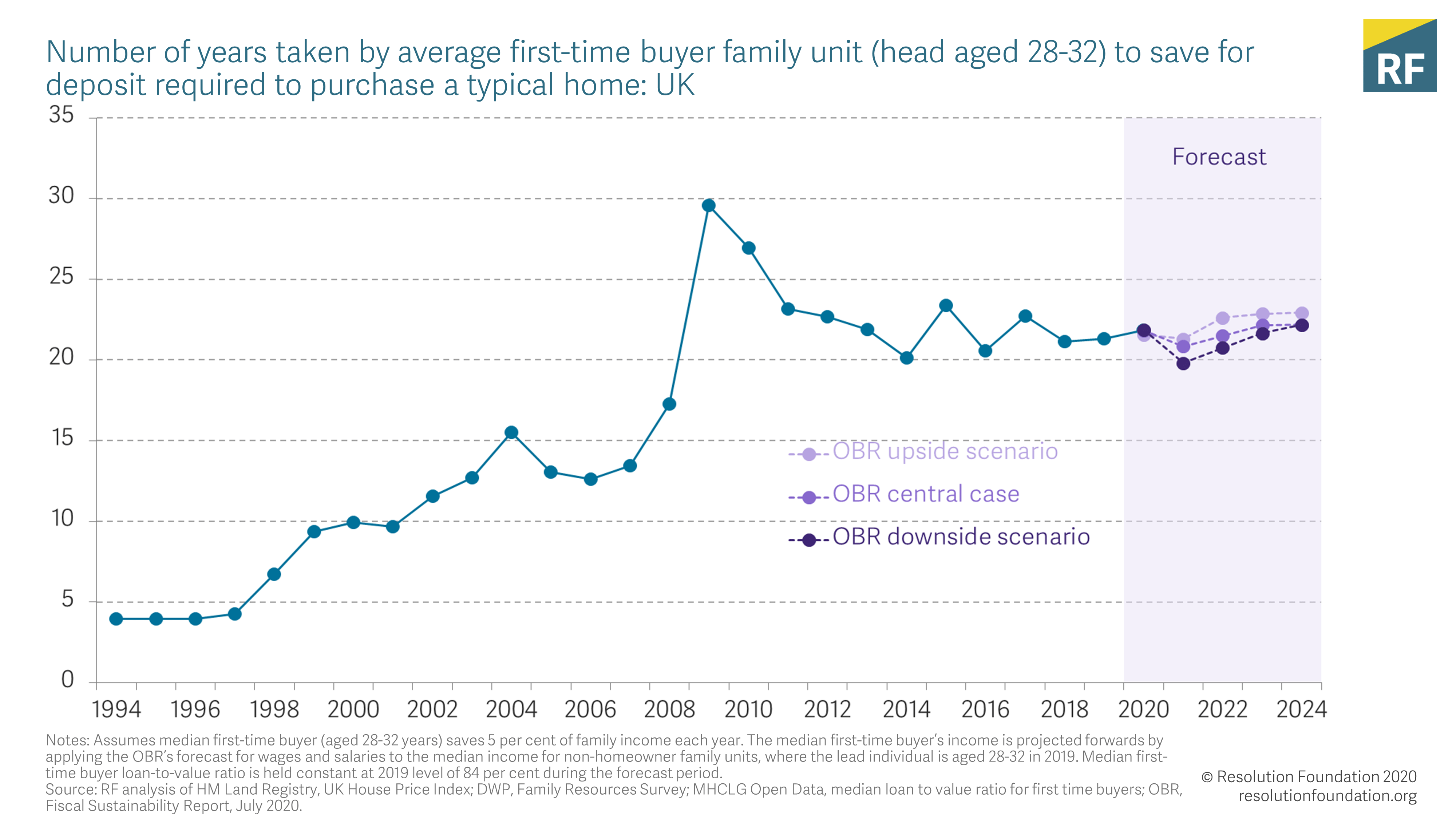 As ever, the average obscures a wide range of experience and those with more buoyant incomes will be better-placed to take advantage of house price falls.1 However, the next few years may be even more challenging for the average first-time buyer than Figure 2 suggests. The significant house price falls of the late 2000s did not correspond to reductions in the deposit burden: indeed, it is in the aftermath of the financial crisis that barriers to home ownership peaked. This dramatic increase (from 13 years in 2006, to 30 in 2009) was driven largely by the reining in of housing finance during the credit crunch, behaviour that was codified in 2014 by the Mortgage Market Review. While there have been mixed messages from lenders in recent months (Nationwide reduced its standard first-time buyer loan-to-value ratio from 95 per cent to 85 per cent in June for example, although it recently increased this back to 90 per cent), tighter credit conditions are certainly possible. This would be particularly likely if the crisis proves to be more long-lasting than expected – as assumed in the OBR’s downside scenarios – and banks face larger losses on their loan books. We estimate that if the average first-time buyer loan-to-value ratio fell to 80 per cent – the level observed in the wake of the financial crisis – the number of years required to save for a deposit would rise to 28 by 2024, in the OBR’s central scenario.

But is it all bad news for those who aspire to own their own home? One factor that would decrease the number of years it takes to build up a deposit is an increase in the savings ratio (in our thought experiment above we assume that 5 per cent of income is banked every year). So has lockdown enabled many to save more as they have cut back on commuting, eating out, and the like? We explore the savings behaviour of non-homeowners in Figure 3. As this makes clear, it is indeed the case that some working-age adults have been able to increase their savings in recent months: close to one-quarter of those living in another’s home for example. But at the same time, a significant share of the non-owning population has had to cut saving to cope during the pandemic, with just shy of one-quarter of private renters reporting this to be the case. Moreover, the state of young people’s finances before the crisis matters too. Those who will be most able to benefit from lower house prices are those who already held significant savings. This is a small group, however: according to the Family Resources Survey, more than half of private renters aged between 25 and 34 years had no savings in 2018-19, for example, and a further 18 per cent held less than £3,000.

Figure 3: One-quarter of private renters have had to reduce savings in recent months 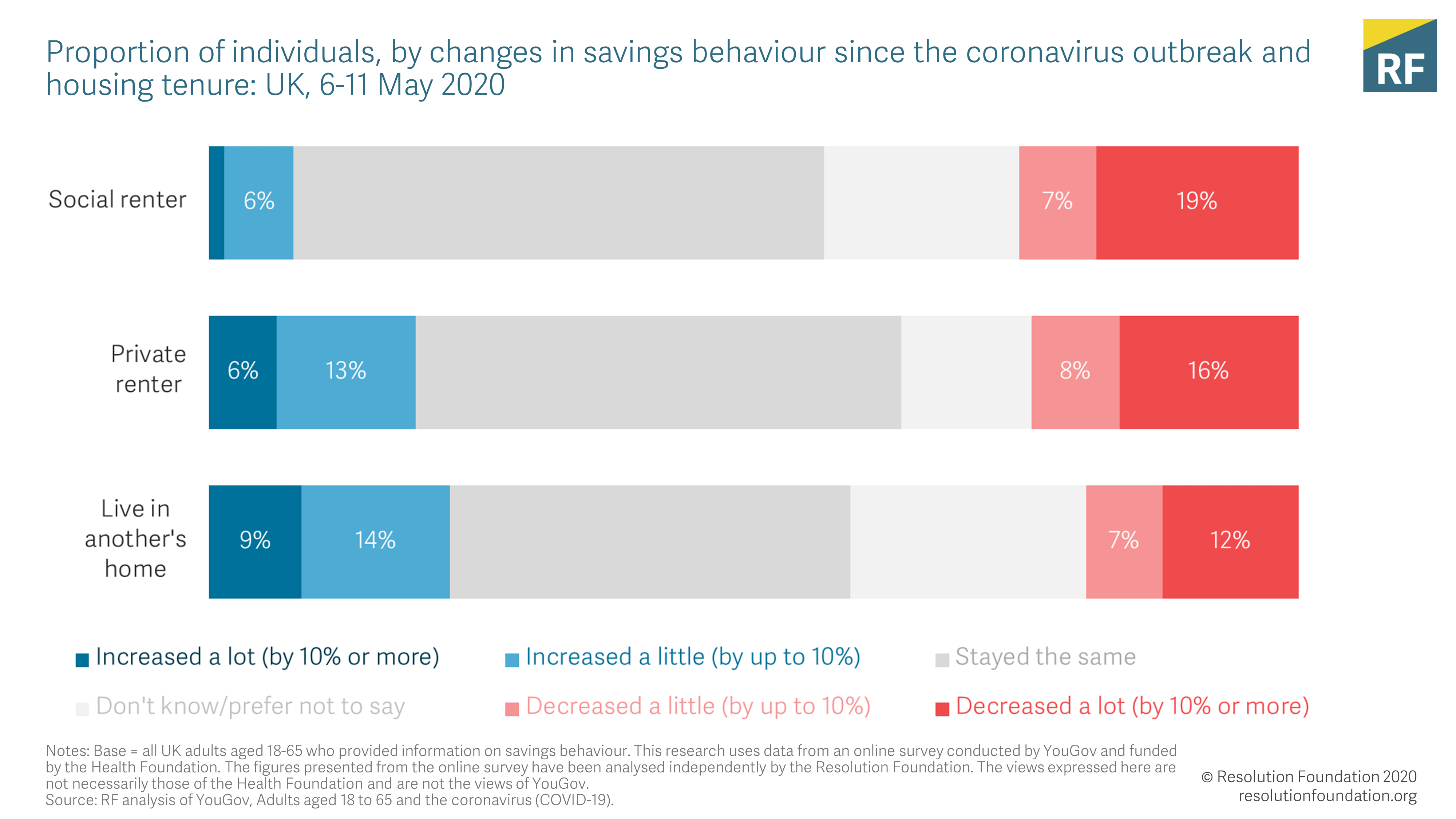 Finally, the Government has recently made a hefty (albeit temporary) cut to Stamp Duty in order to stimulate the housing market. However, this provides little help to beleaguered first-time buyers: not only does it have little direct benefit (the average first-time buyer already purchased a home priced below the previous Stamp Duty threshold, except in London), the change also takes away the slim edge this group had in the market vis-à-vis other types of buyers. While the economic fundaments have been shaken up by the coronavirus crisis, absent of relative changes to their incomes, or policy support that advantages first-time buyers, the average young family today remains as reliant on parental support or large chunks of change from the state to realise their home ownership ambitions as they did before the crisis.