Welcome to the final Housing Outlook of 2021.1 Times are tough for many at present, as prices rise and Omicron puts the UK’s tentative economic recovery in jeopardy. In this quarter’s spotlight we assess the living standards prospects of social renters, and in particular consider what soaring inflation means for their housing costs as they head into the spring.

Social rents can currently be increased by up to CPI plus 1 percentage point each year, and as a result, those living in local authority or housing association homes could see their housing costs rise sharply in April 2022. The 4.1 per cent rent hike they may face (based on September 2021’s inflation figure) will be the largest rise for a decade – inflating the average social renter family’s rent by £202 per year. This increase comes on the back of a decade-long period in which social renters’ housing costs have outpaced incomes, and support from the benefit system has declined.

Housing providers will no doubt want to increase social rents in full in April 2022, not least because of the unexpected rent reductions they were required to make between 2016 and 2020. But an above-inflation rent rise would be especially bad news for the 44 per cent of social renter families not in receipt of housing benefit, who will have to absorb the entire increase themselves. Social landlords may be caught between a rock (business need) and a hard place (tenant wellbeing) right now, but raising rents to the maximum in April 2022 can only worsen the acute living standards crunch that social renters face next year, risking rising housing stress and rent arrears as a result.

The price of goods and services has soared in recent months as the UK has cycled in and out of pandemic-related restrictions and suffered supply constraints and shortages (particularly in the oil and gas sectors). Rising inflation clearly erodes the purchasing power of all families, but a higher rate of inflation has an additional implication for the housing costs of social renters.

CPI inflation was 3.1 per cent in the year to September 2021 (the month used as the peg), so social rents will rise by as much as 4.1 per cent from April 2022 (equivalent to an additional £202 per year for the average social renter family).3 Although this is a ceiling on rent increases, and not a requirement, it seems very likely that the majority of housing providers will apply the full amount given the unexpected four years of falling rents – and thus falling rental income – that the sector faced from 2016. As Figure 1 shows, this 4.1 per cent increase will be the largest nominal rise in social rents for a decade. This comes at precisely the same point that other pressures on family budgets will come to a head: average gas and electricity bills are predicted to rise by as much as 50 per cent when the energy price cap is raised in April 2022; the Bank of England anticipates that consumer price inflation will peak at 6 per cent the same month; and National Insurance contributions will rise in the new financial year. Rising social rents on top of these increases will be very damaging for living standards indeed. 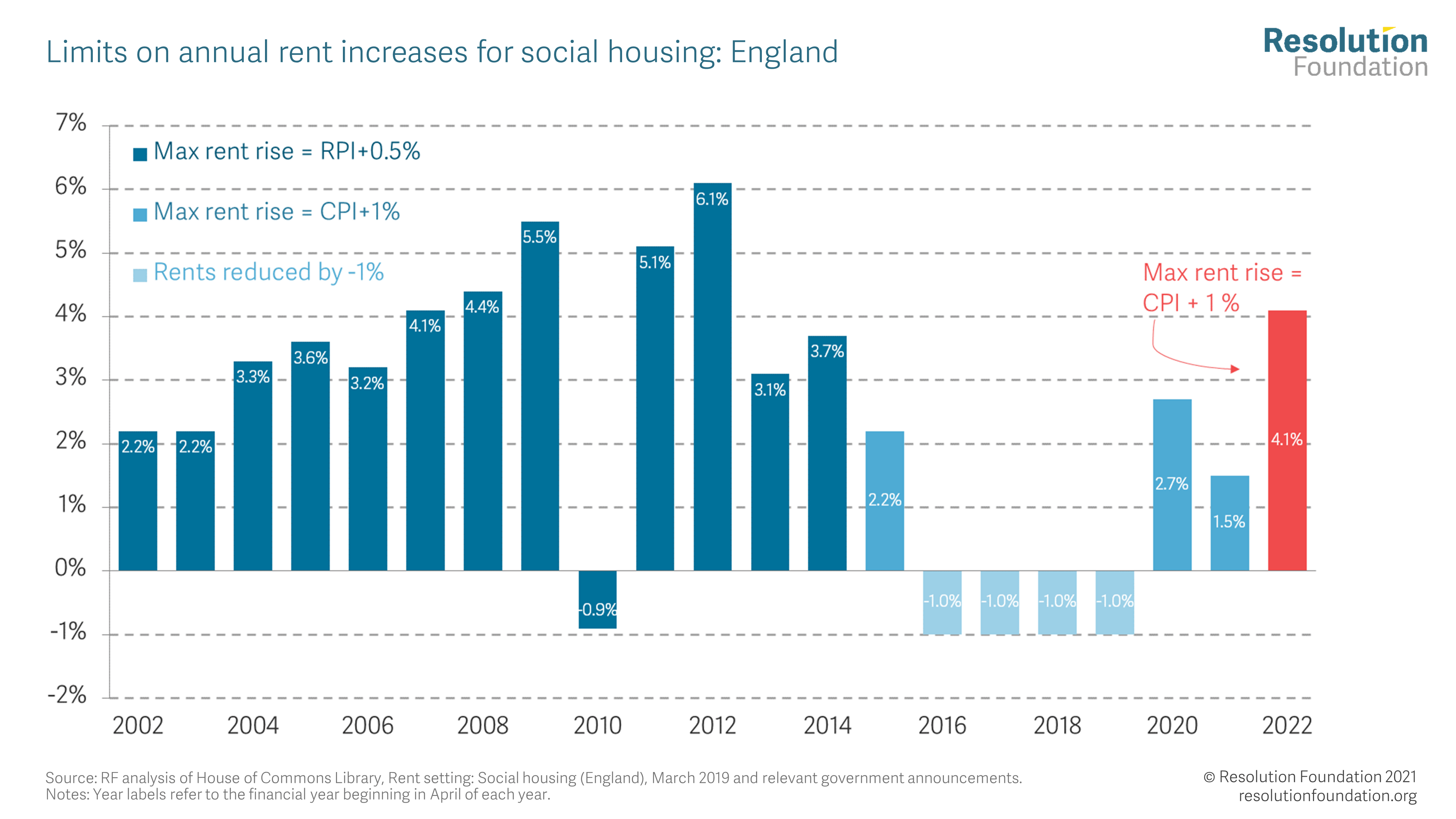 This high cap on social rents is particularly worrying given that housing costs have become increasingly burdensome for social renters over the last decade. In Figure 2, we show the average housing cost (net of housing benefit) as a proportion of income for owner occupiers, private renters and social renters.4 As this makes clear, social renters spent an average of around 15 per cent of their income on housing costs between 2002 and 2012 even after housing benefit is taken into account, a figure that rose to 19 per cent by 2019-20 (equivalent to £786 per year extra rent for the average social renter family). By contrast, owner occupiers have seen their housing costs decline as a proportion of income over this period (they have falling interest rates to thank for that), and, although private renters spend significantly more of their income on housing than social renters, this has remained steady at around 31 per cent. The rent rise for social renters in April 2022 will continue this trend: 4.1 per cent outstrips the OBR’s estimate for 3.6 per cent growth in household disposable income per capita over
the same period, as well as expectations for private sector rents, meaning that further pressure will be put on both the absolute and relative living standards of social renters.5

Figure 2: Social renters’ housing costs have increased significantly relative to incomes over the past decade 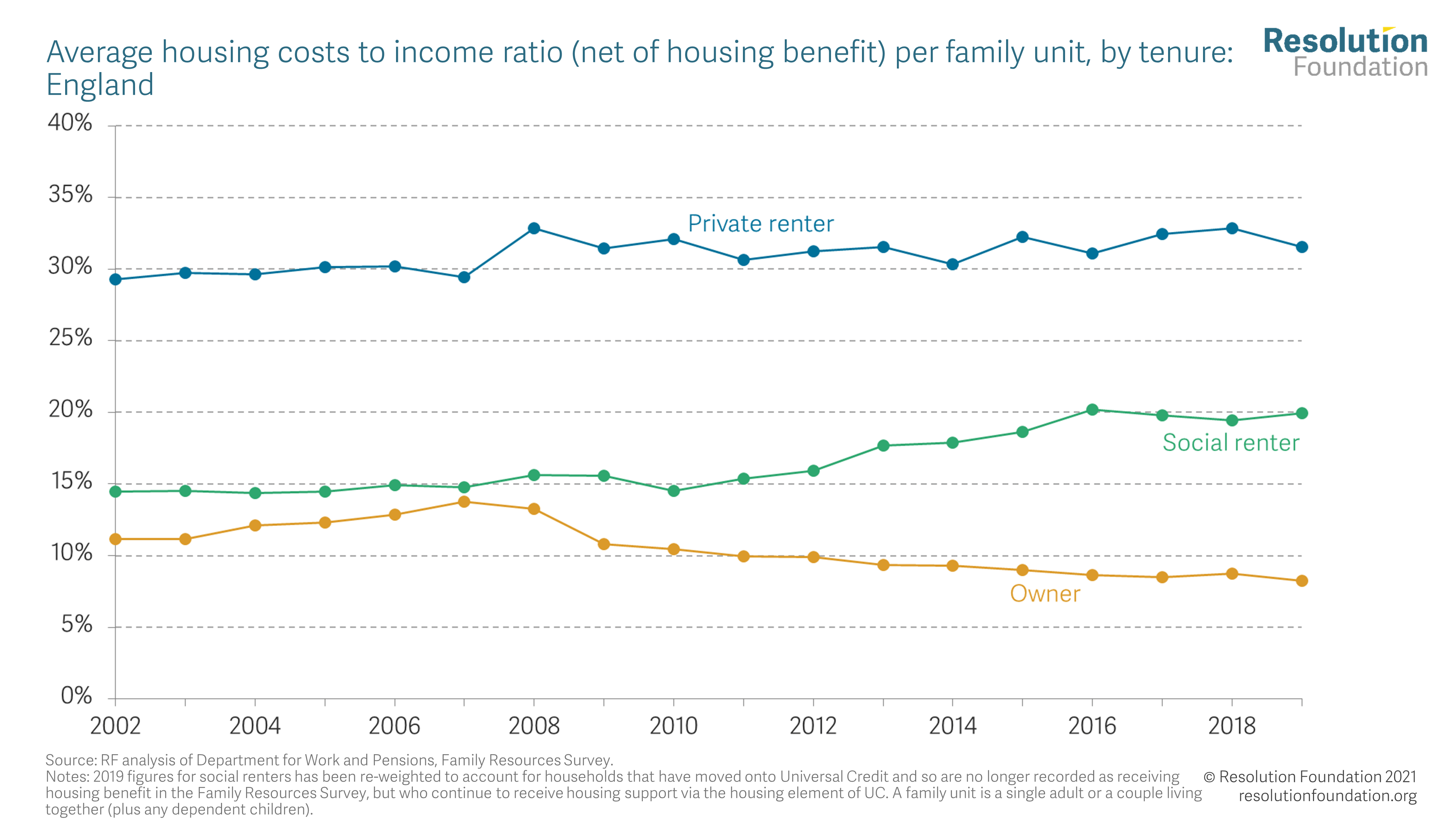 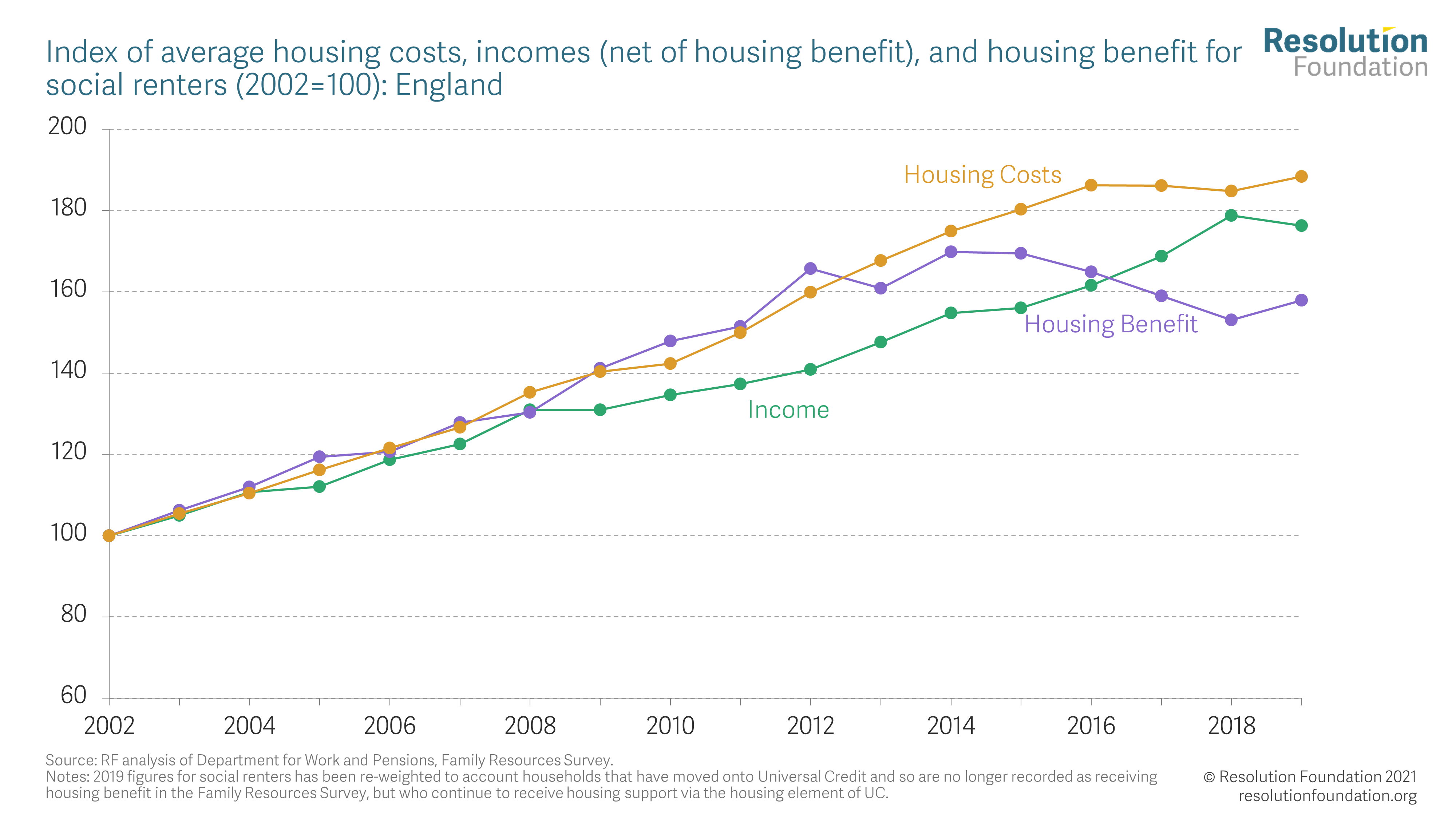 That said, this picture is largely driven by the fact that in recent years, a growing share of social renters do not receive any state support toward their housing costs (this is more likely to be because they have sufficiently high incomes not to require help rather than because of tightening eligibility).6 It is this group of social renters who are clearly most exposed to the above-inflation rent rise coming their way in April 2022 and, as Figure 4 shows, this is a non-negligible group. Estimates suggest that across England, 56 per cent of social renting families receive some form of benefit support with their housing costs, leaving 44 per cent paying their rent in full. But there is significant regional variation to this picture: as the chart makes plain, social renters living in London, the South East and South West are less likely to be in receipt of housing cost support than those in other parts of the country, and therefore likely to be harder-hit come April 2022.

So where does this leave social renters? The last twenty-two months have clearly been tough, but the various support temporary support measures introduced when the pandemic hit – including the Job Retention Scheme, the £20 per week uplift to Universal Credit (UC) and extra support provided via Discretionary Housing Payments (DHPs) – have cushioned the impact of the pandemic for many: data shows, for example, that housing arrears in the social rented sector have not grown significantly over the pandemic period.7 (This is also no doubt testament to the very active outreach work that many housing providers have undertaken during the Covid-19 crisis, providing valuable lessons about how to contain arrears even in ‘normal’ times). But as we enter 2022, those sources of support have largely ended, just as new and acute living standards pressures emerge in the form of rising inflation (and, of course, the Omicron variant puts the tentative economic recovery in jeopardy). 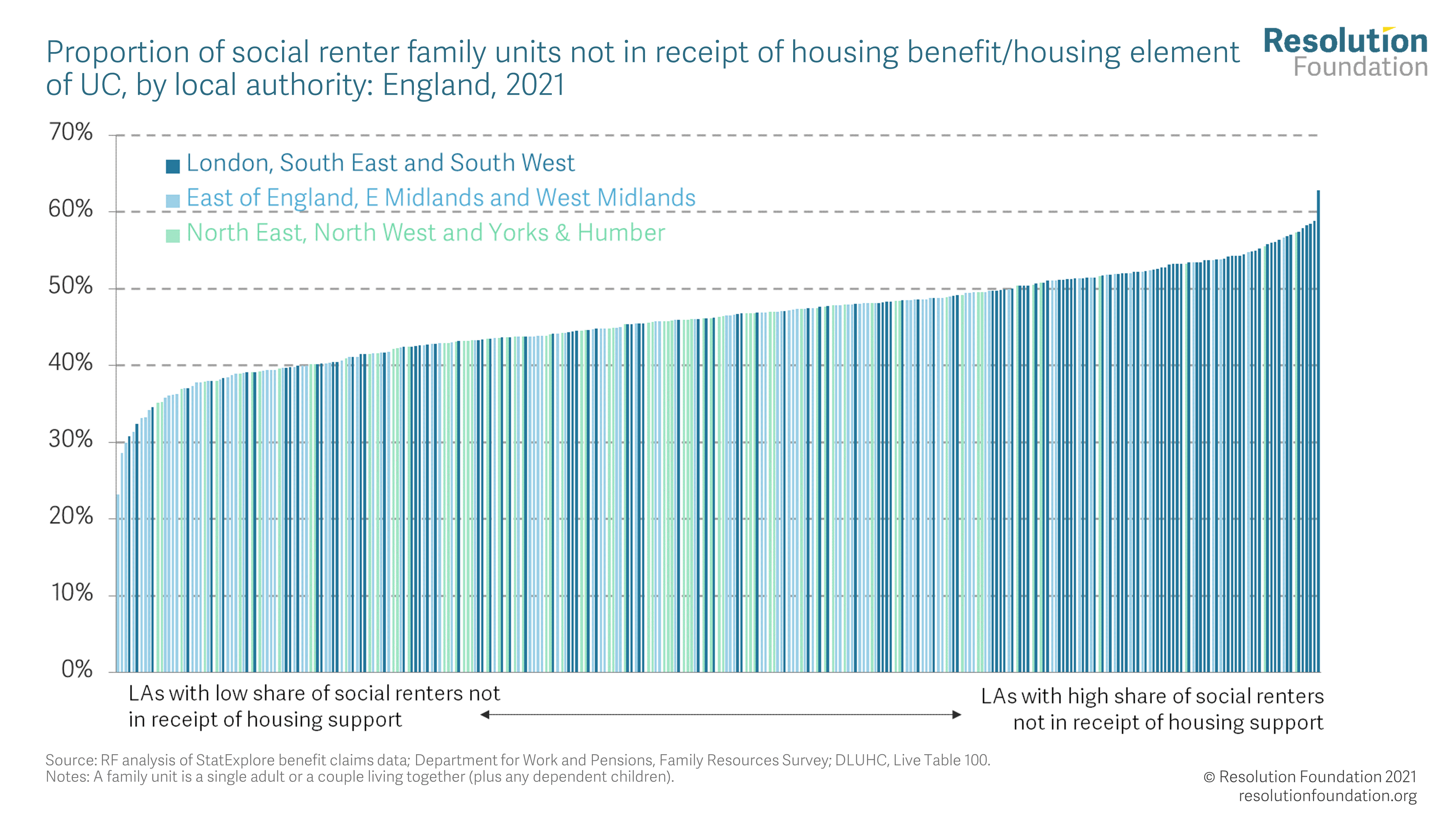 We conclude, then, that a large share of the 4.75 million social renter families in England face not just a grim winter as a result of rising costs and disruption from the new variant, but a particularly acute living standards crunch in the spring. While it is natural for social landlords to want to increase rents to the full as they try to make up the ground they lost between 2016 and 2020, if ever there was a year to soft-peddle on the maximum uprating, that year is 2022.

1 With thanks to our colleague Daniel Tomlinson for the idea for this spotlight; Sam Lister at the Chartered Institute for Housing for talking us through the intricacies of historical rent setting
policy; and various housing association contacts who kindly shared front-line perspectives with us on this topic.

2 This policy was announced as part of the 2015 Summer Budget, just one year after a new longterm funding proposal was announced with the stated aim of providing social housing landlords the certainty needed to promote investment.

4 Throughout this spotlight we use the term ‘housing benefit’ to include the housing element of Universal Credit.

5 The OBR forecasts private and social rents together to increase by 2.3 per cent in 2022-23, reflecting a lower rate of increase for private rents compared to social rents.

6 Between 2002 and 2019, for example, the share of social renting family units in England with at least one member in employment rose from 36 per cent to 46 per cent. Source: RF analysis of ONS, Labour Force Survey.

7 Government funding for DHPs was boosted by £40 million between 2019-20 and 2020-21, reaching a total of £180 million, and 94 per cent of the allocation was spend by local authorities. In 2021-22 £100 million was made available with a further £40 million being reserved for funding
based on caseload outcomes.