Tackling inequality is a long game, particularly when faced with deeply embedded structural inequalities. For instance, it’s welcome to see the gender pay gap almost disappearing for those aged under 40 – with shifting workplace attitudes likely heavily contributing to a reduction in gender-based pay inequality. But the gap re-emerges at older ages. The fact that women still account for a disproportionate amount of unpaid childcare means that they continue to face pay inequality at older ages when compared to their male counterparts. And these inequalities in pay and in time taken out of work reverberate for some time, accumulating to form a gender pension gap which, at almost 40 per cent, is much higher than the gender pay gap (albeit much less reported).

While it is unlikely that the social structures underpinning such inequalities will be dismantled overnight, understanding where and why they emerge is a crucial first step towards tackling them. That is why moves such as the introduction of mandatory pay gap reporting and the Race Disparity Audit are so important. But there is still a long way to go. Too often, discussions about structural inequality are side-lined from major policy debates. They are seen as the preserve of equalities bodies and dedicated charities and think tanks. The work of such organisations is vital, but there are strong arguments for integrating the inequality focus into broader policy discussions. Not doing so means we continue to ignore the pressing needs of large swathes of the British population. And it actively damages our ability to tackle pervasive economic and social challenges – like poverty.

Tackling poverty overwhelming benefits members of disadvantaged groups, but it also rests on better understanding what drives the disproportionate prevalence of poverty within such groups in the first place 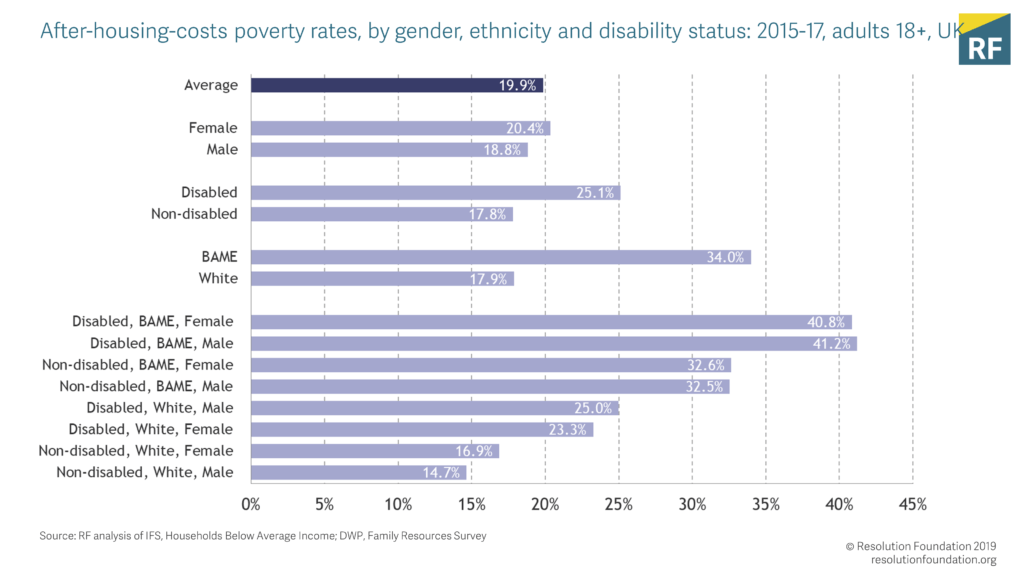 These massive discrepancies highlight the importance of mainstreaming the inequalities debate, with a key two-way street in evidence. First, if we can do more to tackle poverty and related issues, we’ll almost inevitably narrow social inequality – the two are very closely intertwined. Secondly, if we want to better understand how we can tackle poverty, then we need to do more to unpick why such disproportionate prevalence exists and persists over time.

At one level then, tackling the major contributors to high poverty rates – such as low pay, the declining relative value of working age benefits, or high housing costs – will have the double benefit of improving living standards for all while tackling the structural inequality faced by disadvantaged groups.

Consider housing for example. Relative housing costs are significantly lower for homeowners than for renters, placing the latter group at a much higher risk of being in poverty. In 2016 for instance, mortgagors typically had housing cost-to-income ratios of around 12 per cent while those in social housing faced rates around 30 per cent and private renters recorded rates of almost 35 per cent. Our estimates suggest that accounting for housing related costs increases poverty rates by around 4 percentage points on average. This means that when measuring poverty rates on a before-housing-costs (BHC) basis the average poverty rate is 15.4 per cent, but when measuring poverty on an after-housing costs (AHC) basis, as we do in the chart above, the rate increases to almost 20 per cent.

But the impact of housing costs increases to around 11 percentage points for BAME groups, raising the poverty rate from 23 per cent on the BHC measure to 34 per cent on the AHC measure. This is driven in large part by the higher prevalence of renting in these populations. As the next chart shows, the homeownership rate for black families (at 24 per cent) is less than half the UK average (53 per cent). And rates are also particularly low among Bangladeshi and Pakistani (34 per cent) and Chinese (35 per cent) groups. In contrast, the rate for white families is higher than average at 56 per cent. Below-average homeownership rates among most ethnic minority groups therefore go a long way to explaining differences in the prevalence of poverty. 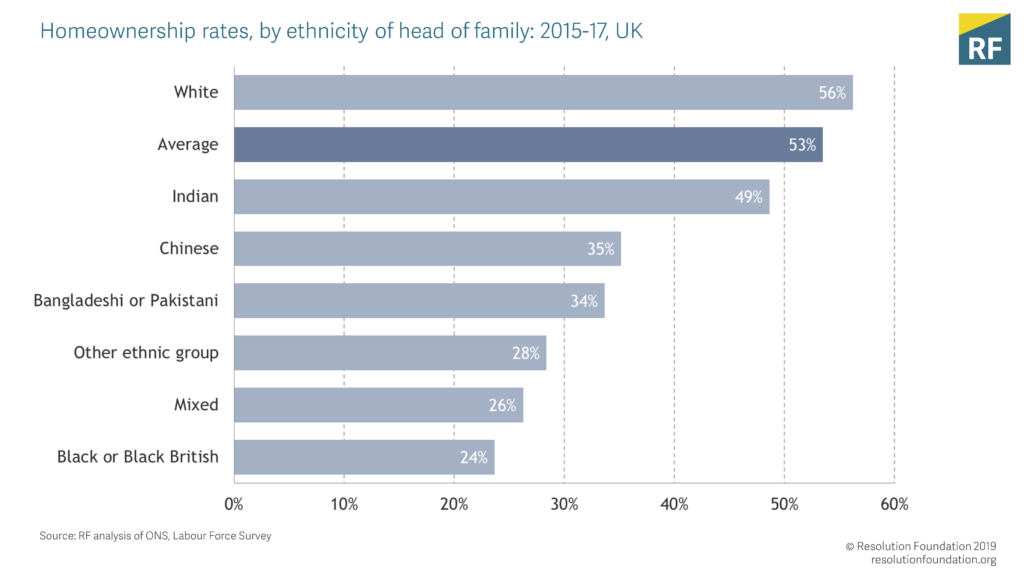 Efforts to boost home ownership rates and lower the housing costs associated with renting – mainstream goals for anyone interested in tackling poverty – are therefore disproportionately beneficial to BAME and other disadvantaged groups. Likewise, the fact that it is BAME groups that are disproportionately affected by quality and security issues affecting the private rented sector and overcrowding in the social rented sector mean broader housing sector reform should resonate especially loudly with anyone looking to tackle racial disadvantage in the UK.

But tackling broad living standards issues like housing can only go part of the way. The drivers of poverty and inequality are multiple and complex, with the major causes often being quite group-specific. An effective poverty reduction strategy needs to reflect that, otherwise it risks leaving people behind.

The focus on in-work poverty serves as a good example. With the majority of people in poverty now living in working households, the terms of the debate have shifted somewhat over recent years. But, while understanding the specifics of life in the working poor is clearly hugely (and increasingly) important, we shouldn’t put all of our poverty-reduction eggs in one basket. Worklessness remains an issue – and one that increasingly affects some groups more than others.

We know that the UK’s employment rate has grown significantly over recent years. In the most recent data, it sat at a joint record high of 76.1 per cent. As the next chart, which shows employment rates by social characteristic in 2008 and 2018, illustrates, this employment growth has in the most part overwhelmingly benefitted members of historically disadvantaged groups. Faster employment growth for women relative to men means that the employment gap between the sexes fell by 24 per cent to 9 percentage points in 2018. Likewise, the employment gap between BAME and white people fell by 21 per cent to 11 percentage points. 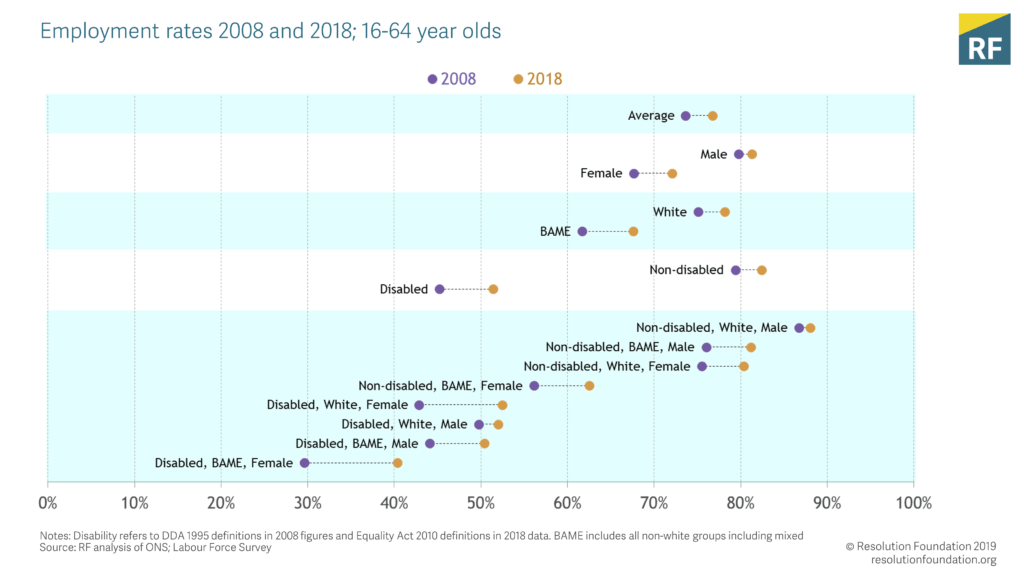 However, the narrowing of the employment gap recorded by disabled people was much smaller. It fell by just 9 per cent and remained at an exceptionally high 31 per cent in 2018. This translates to just over half of disabled people (51 per cent) being in employment in 2018 compared to 82 per cent of non-disabled people. The composition of the out-of-work has therefore changed over this period, altering the approach we might want to take to tackling poverty within the group.

And it is not just as simple as focusing on disability. The more detailed breakdowns in the chart highlight the extent to which those groups facing multiple disadvantage also continue to be subject to much lower than average employment rates. For example, despite an improvement of around 6 per cent, the employment rate for non-disabled BAME women, at 63 per cent, remains around 18 percentage points lower than the rate for non-disabled white women (80 per cent). And for disabled, BAME women the rate remains exceptionally low at 40 per cent. That is 11 percentage points below the average rate for disabled people.

Just as the composition of, and the challenges facing, the out-of-work has shifted over time, so too has the nature of what it means to be ‘in-work’. Low pay and under-employment go some way to explaining the rise of in-work poverty, but the drivers of such trends go deeper than simple economics.

For example, women, BAME and disabled people are more likely than their male, white and non-disabled counterparts to be in low pay and, as the next chart shows, are more likely to be working fewer hours than they would like to. Discrimination is likely to be at least part of the story here. But the nature of that discrimination differs from group to group, and anti-discrimination legislation can only do so much. And there are also a myriad of other reasons why these groups face structural disadvantage within the labour market, ranging from the unavailability of work that fits around the lives of mothers to the failure of employers to actively provide the reasonable adjustments that make work possible for disabled employees for instance. Attempting to solve in-work poverty by focusing on minimum wage rates and the working of zero-hours contracts is therefore an important, but incomplete, strategy. 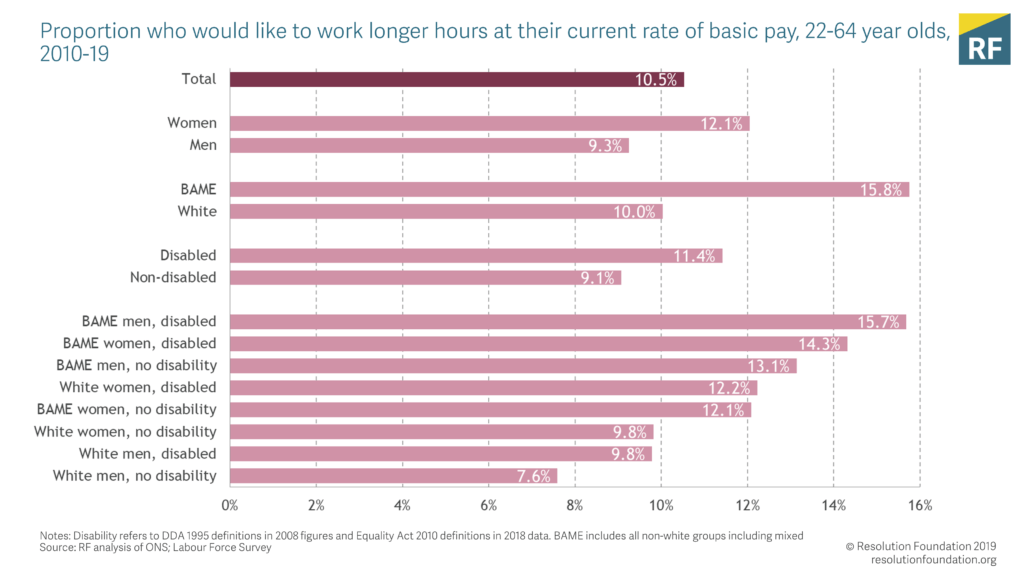 Understanding how structural inequality plays out across different people, places and points in time requires the adoption of a new focus within the researcher and policy making community

While there is a lot more to structural inequality than gender, ethnicity and disability, the above examples serve to illustrate the centrality of these issues to broader debates about living standards. Much good work has already been done to highlight the inequalities faced by disadvantaged groups across the UK, and while there are always ways to improve our understanding of these things, the bigger challenge now is how we mainstream all of this thinking into the policy making machine.

It is for this reason that the Resolution Foundation has spent a large part of this year working with colleagues at UCL on a project bringing together researchers and policy makers from across the UK. The project has shone a light on examples of best practice in research and in policy making that already exists, but which can be more widely socialised. It has also highlighted also the areas in which we still don’t know enough – evidence gaps relating to absent data, the failure to ask the right questions, and an incomplete understanding of the effectiveness of different policy interventions.

To this end, the closing report from UCL has drawn out five key ‘lessons’ for thinking about how experts across the research and policy making community can more consistently and effectively approach the topic of structural inequality. Those lessons relate to the way in which we use language, the need to focus on equity of outcomes, the job to be done in relation to better collecting, understanding and communicating evidence, the strong case for improved voice and representation in research and in policy making, and the over-riding importance of place. None of the project findings represent a silver bullet, but in the long inequality game they at least provide us with a clearer sense of how to approach the task at hand.