In this spotlight we discuss new research on the size and distribution of UK household wealth. Such wealth matters for living standards, economic opportunity and the ability of families to weather the coronavirus crisis. But it also matters because there is increasing interest in reforming wealth taxes in the UK, not least in the context of the need for the Government to repair the public finances once the economy has recovered from the pandemic. All this means it is crucial to understand fully the scale and distribution of wealth in the UK. Our estimates suggest that official measures of wealth are missing around 5 per cent of total wealth in the UK – almost £800 billion – held by very wealthy families. Policy makers must take this into account when thinking about the potential for increasing Government revenues from wealth taxes.

In this spotlight we discuss new evidence on the size and distribution of household wealth which has been published today. The new work is part of the UK Wealth Tax Commission which has brought together research from a range of disciplines in order to assess the practical and conceptual arguments for net wealth taxes. The result is a series of evidence papers that materially advance our understanding of UK wealth. Below we focus on analysis presented in a new paper with Arun Advani (one of the project Commissioners) which presents new analysis of what we know about the scale and distribution of wealth in the UK.

This is important because household wealth affects the living standards households experience, as well as the opportunities available to them. For example, as our previous work has shown, home owners face lower housing costs and tend to be able to borrow more easily than those who rent. These effects have been magnified by the coronavirus crisis with half of working age adults coming into the crisis with savings of less than £1,000 having used what savings they have to cover living costs (while only 20 per cent of adults with pre-crisis savings of over £20,000 have done the same).

Official measures suggest aggregate wealth in the UK has risen fast over the past few decades – from around three times national income in the 1970s to over seven times national income today. There is not one single driver of this increase – accumulated saving, demographic change (i.e. an increasing share of older people in the population whose wealth has benefited from saving over many years), valuation changes, and asset price changes are all important. However, our analysis suggests that changes in asset prices, particularly since the financial crisis have been the most important factor. Figure 1 shows that the vast majority of gains in financial wealth since 2006-08 have resulted from the average change in asset prices over this period – a major driver of this trend has been the secular fall in interest rates. Other research for the Wealth Tax Commission has also highlighted the major role changes in interest rates/asset prices have played in inflating the value of wealth.

Figure 1: Most gains in the value of financial wealth have occurred as a result of passive accumulation 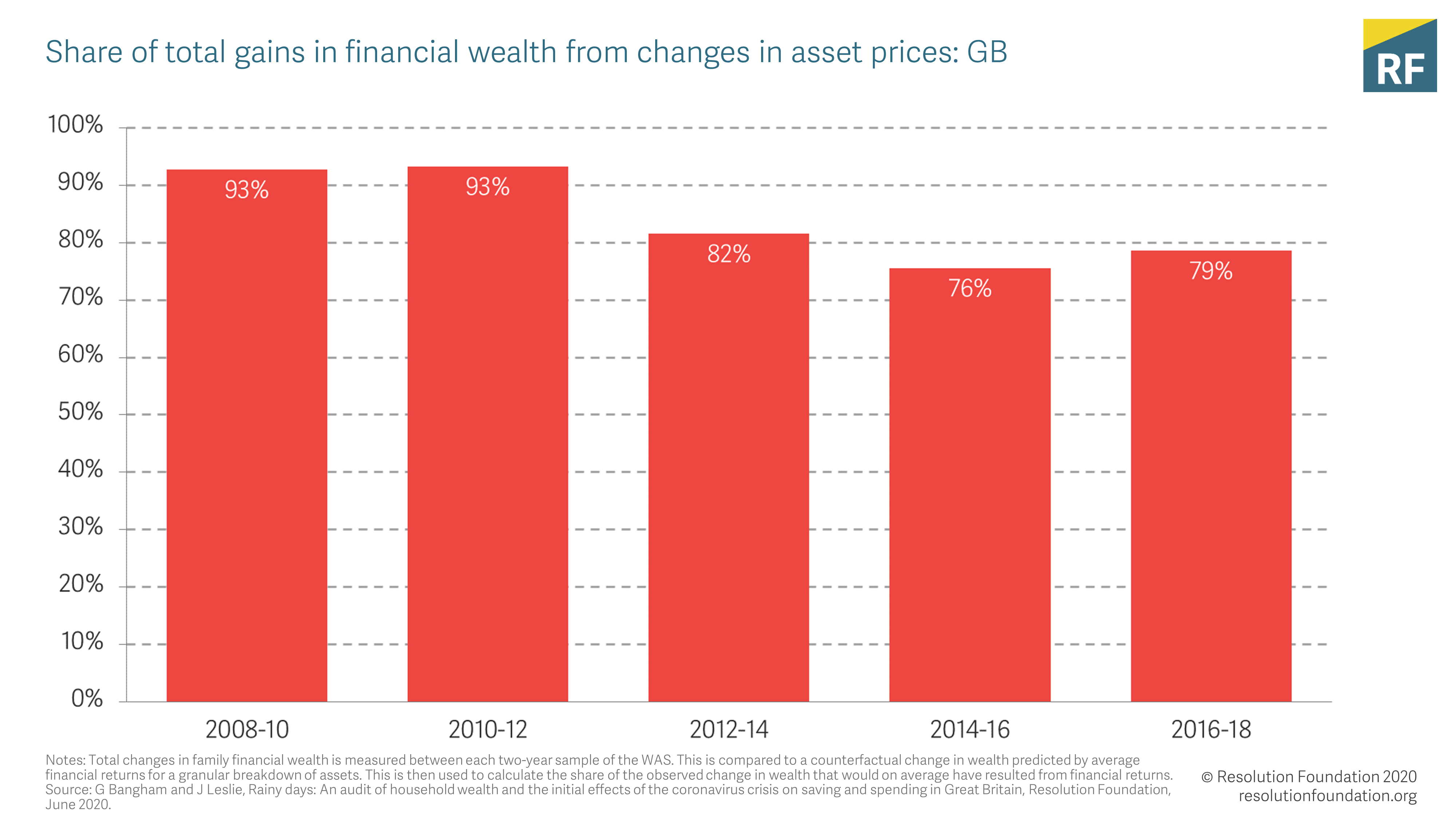 This result has two key implications. First, this trend is unlikely to reverse. This is because central banks have cut interest rates and bought up financial assets (so-called, ‘quantitative easing’, or QE) since the crisis started. This has supported asset prices and, indeed, Resolution Foundation research has shown that the wealth of many families has been boosted during the crisis. This means public policy needs to adjust to the new high-wealth environment.

The second implication is that the case for wealth taxes – particularly an effective tax on capital gains – is higher than is sometimes argued. This is because the disincentive effects of wealth taxes are smaller if the vast majority of wealth gains result from passive accumulation rather than active saving or wealth creation.

It’s not just the size of the total wealth which matters, understanding how it is distributed is also hugely important. The overarching story of the twentieth century was one of falling wealth inequality: as Figure 2 shows, at the start of the 1900s more than 90 per cent of all wealth was held by the richest tenth of households, by 1980 this share had fallen to (a still high) 50 per cent. Since then, the share of wealth held by the richest families has drifted up slowly but the scale of the change has been small in an historical context. This level of inequality means the average adult in the wealthiest 1 per cent of families has around £5 million in net wealth – more than 60 times the average adult.

Figure 2: Wealth inequality fell for much of the twentieth century 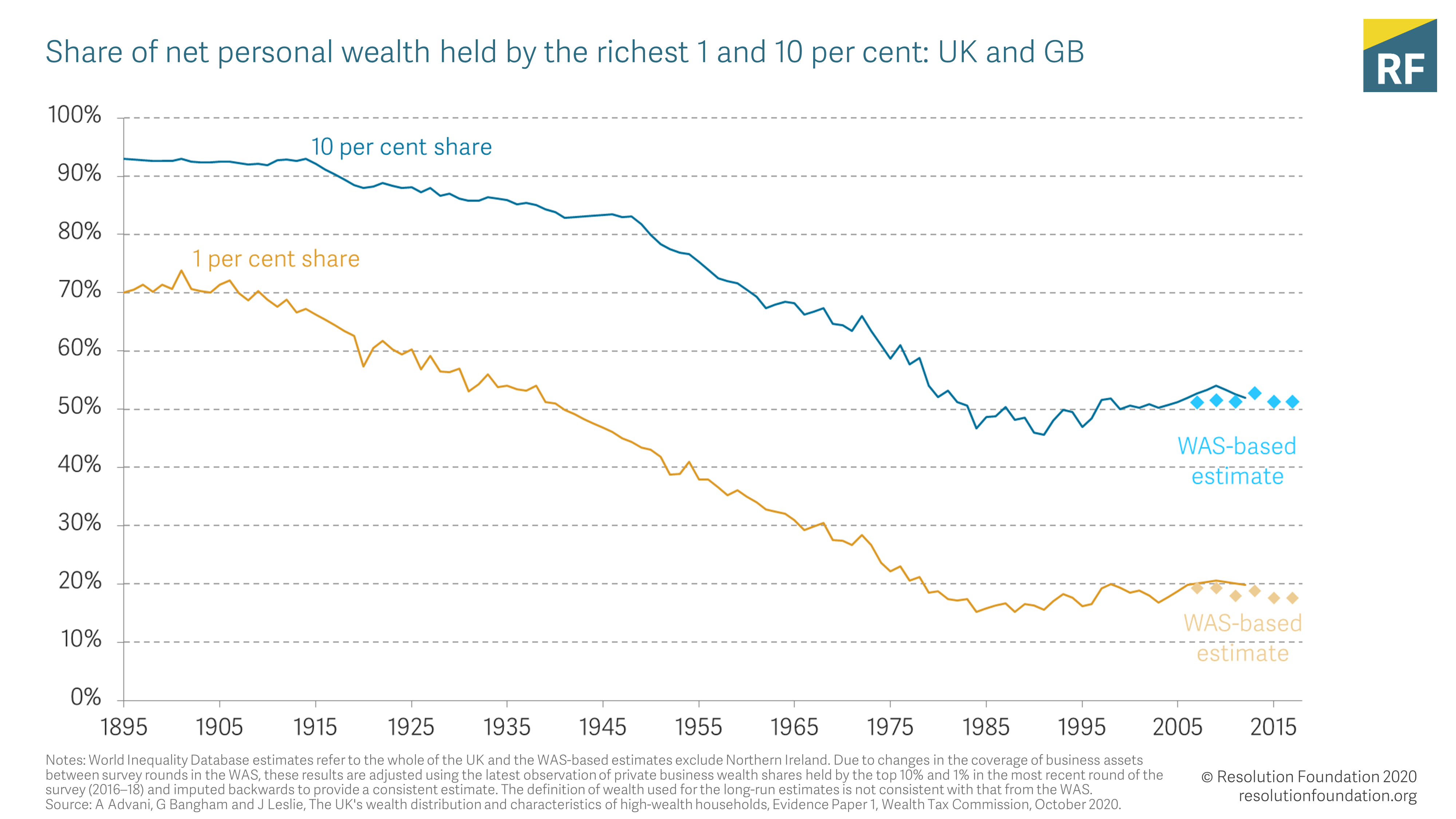 Proposals for wealth taxes typically have a threshold below which families would be exempt from the tax – and the Wealth Tax Commission final report proposals are no exception. Therefore, it is helpful to understand the characteristics of the families who might be subject to a wealth tax. Figure 3 presents the share of each age group who have wealth above certain thresholds. This shows that those who are close to retirement age are much more likely to be captured by a net wealth tax – this reflects both life-cycle effects where people tend to accumulate wealth during their working life and then draw it down during retirement, and cohort effects where the ‘baby boomer’ generation have experienced some of the largest gains in wealth in recent decades. Wealthy families are more likely to live in the south of England, particularly in the London and the South East, than other areas of the country. And, as Figure 4 shows, wealthy families are more likely to be white or Indian, with black Africans the least likely to come from a high wealth household.

Figure 3: The wealthiest people tend to be close to retirement age 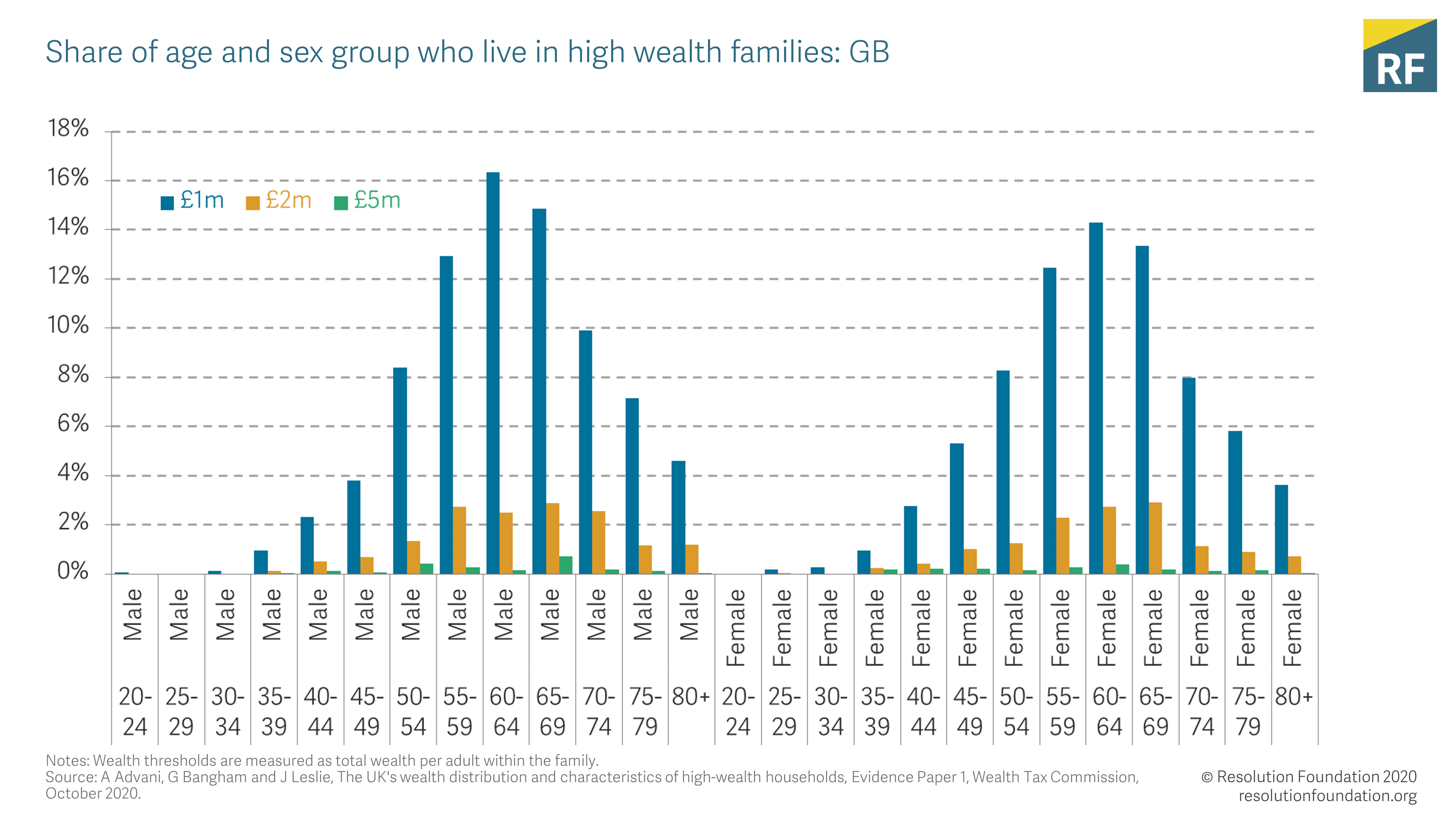 Figure 4: White and Indian families have the highest share of high-wealth families 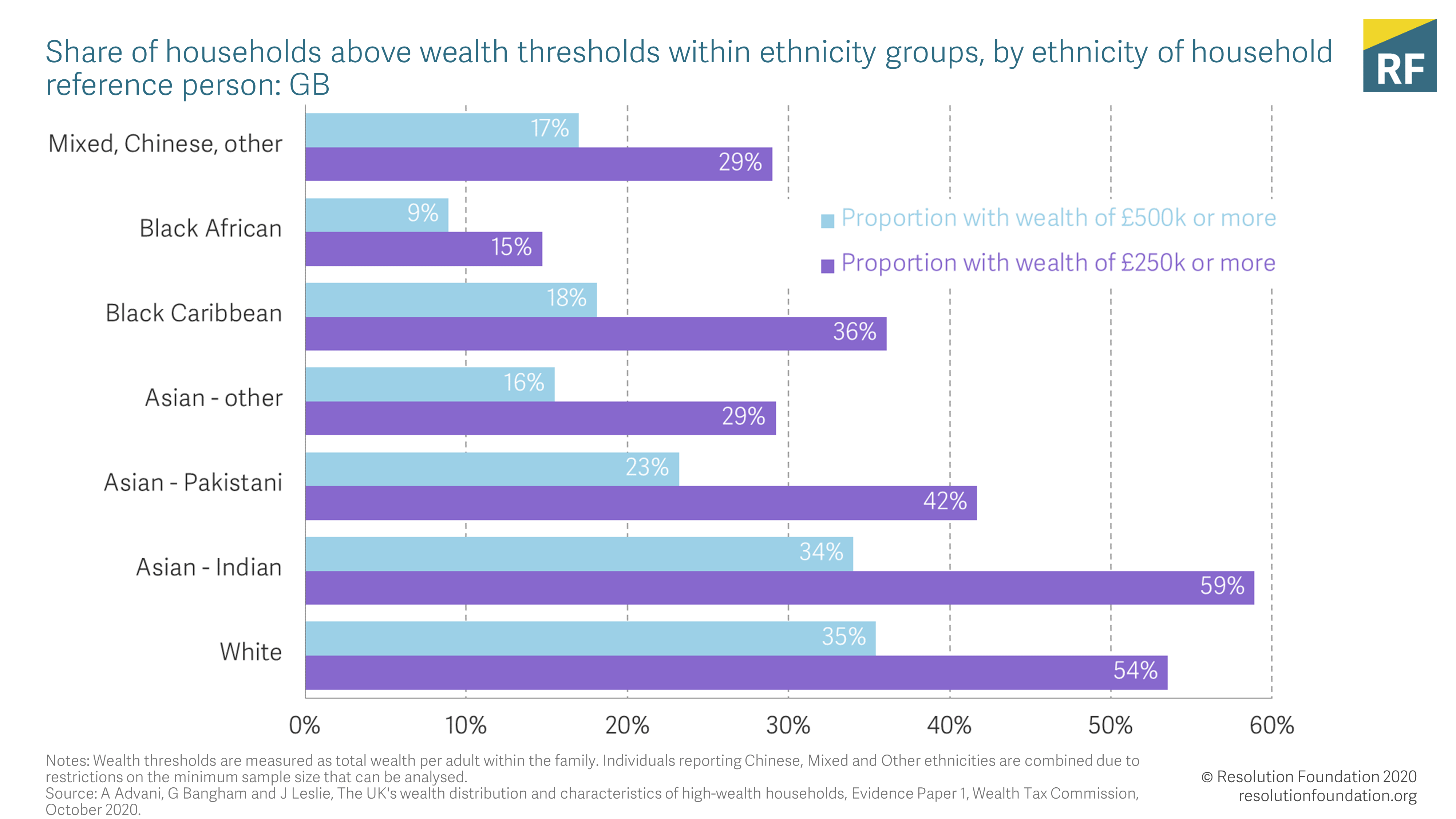 The prime source of data on household wealth in the UK comes from the Office for National Statistics’ comprehensive Wealth and Assets Survey. This provides a very granular breakdown of households’ wealth and provides a large sample. But capturing the very wealthiest families in a survey like this is hugely challenging: families are under no legal obligation to respond and there is little incentive for them to do so. In order to estimate the scale of the potential gap in the official statistics, we employed a technique which has emerged in recent years to combine survey evidence with other data sources which better capture the wealthiest families. In particular, we merge the Wealth and Asset Survey with the Sunday Times Rich List. That list aims to provide a complete list of the wealthiest 1,000 families in the UK with an estimate of the value of their wealth.

Obviously, combining these datasets is not as simple as just adding the two together, as it is possible that the two sources overlap and capture the same individuals twice or there could be an underlap where individuals are captured by neither data source. We employ a statistical technique to account for these possibilities. There is a long history of empirical research showing that the top end of the wealth distribution matches a Pareto distribution; we utilise that fact by estimating the Pareto distribution across the pooled data (adjusting the definition of wealth in the Wealth and Asset survey to match the Sunday Times Rich List). The results are shown in Figure 5. The dotted line represents the estimated ‘true’ wealth distribution and where individual observations (in the blue and red dots) fall below the line, the surveys are estimated to be under-capturing wealth. Perhaps surprisingly, the results suggest that the Wealth and Asset survey does a remarkably good job of capturing high wealth families. But, despite that, it appears that official measures of wealth are missing around 5 per cent of total wealth in the UK (and this estimated additional wealth is held by very wealthy families). This amounts to official statistics missing around £800 billion of wealth – all of which is held by the very wealthiest UK families.[i] 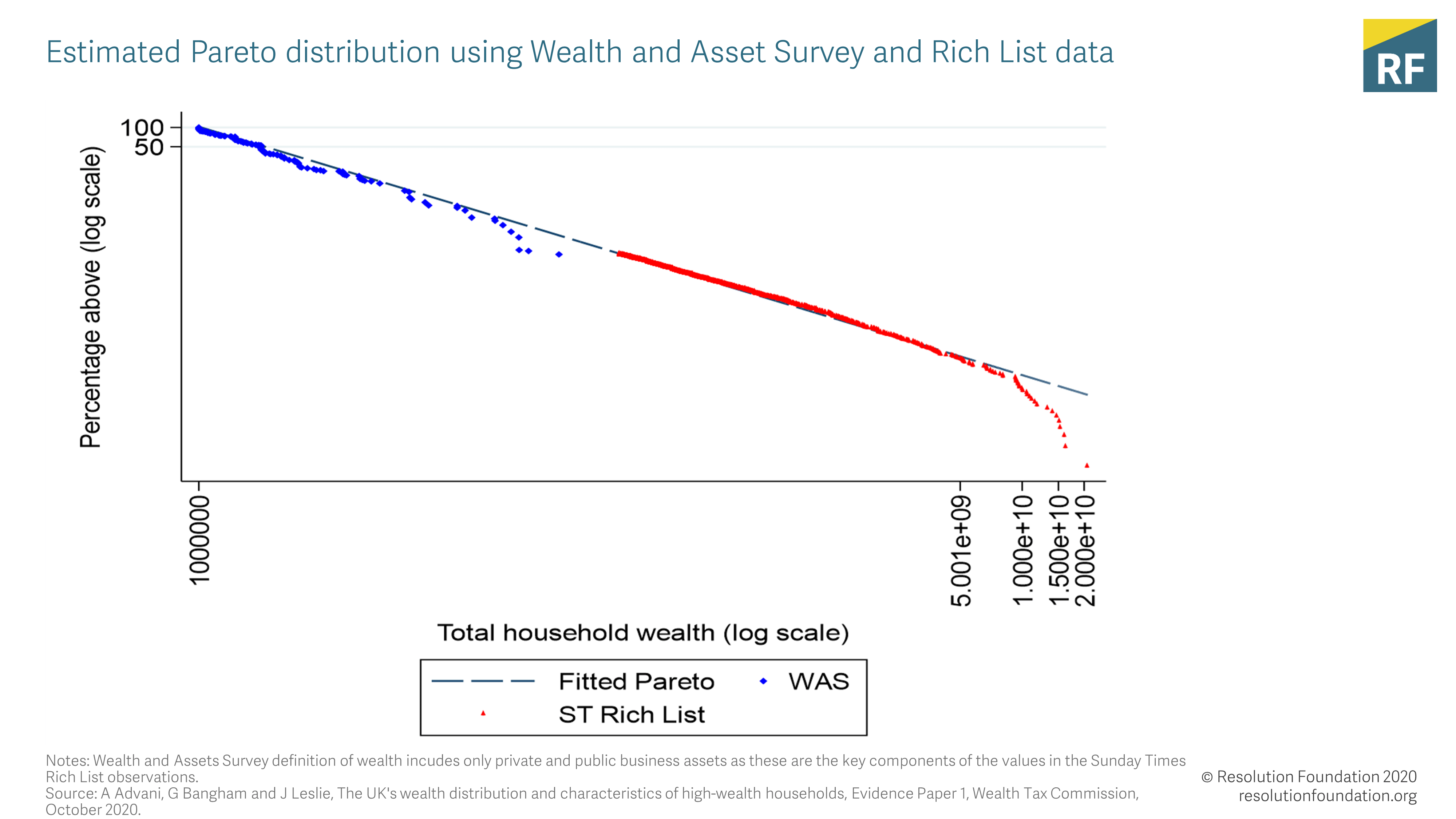 Naturally, this additional wealth amount also affects our understanding of the distribution of wealth. Figure 2 shows that official estimates of the share of wealth held by the top 1 per cent is less than a fifth (18 per cent); when we add in the missing wealth, that estimate rises to closer to a quarter (23 per cent).

There is a clear case for reforming wealth taxes in the UK. We have previously highlighted the inequities in the design of capital gains taxes and the inefficiency in differences in the rates of taxes on income from wealth and labour. The analysis presented here suggests that the case for wealth taxes are magnified by the rising scale of wealth, and that these gains have largely materialised from passive changes in asset prices. There are important gaps in the coverage of data which means that official measures of wealth under-value the true scale of wealth in the UK – which has important implications for estimates of wealth tax revenues.

[i] This estimate is the baseline estimate from the new paper on the UK’s wealth distribution. This estimate makes a number of conservative assumptions (e.g. that the Sunday Times Rich List captures all individuals at the top of the wealth distribution and accurately estimates their wealth – both of which are unlikely to be true). Alternative statistical specifications, laid out in the paper, suggest that the missing wealth could significantly exceed the baseline estimate.