Many aspects of people’s time use have been turned upside down by the coronavirus lockdown. Some restrictions are now being unwound, but others, like limits on the availability of professional childcare, will continue, with particular consequences for how parents of different genders use their time. Indeed, data collected during the lockdown suggests that while job losses and hours reductions have fallen equally on women and men, the impact on parents’ time use has not been equal: mothers have taken on more of the additional burden of childcare created by the pandemic. This is backed up by our own analysis of pre-lockdown time use data, where a comparison of parents who use formal childcare with those who do not shows that not using formal childcare increases the time burden on mothers more than on fathers, on average. On this basis, we speculate whether the pandemic could bring a permanent shift in the way people – particularly parents – use their time.

Time use has been transformed over the past few months

The coronavirus lockdown changed the way nearly everyone uses their time. Weekly working hours fell by an unprecedented 8.7 per cent in the latest figures, for the three months to April. Many children face at least half a year away from school or nursery, while parents’ lives have been changed in a range of ways. Now that the lockdown is gradually lifting, it’s a good moment to ask which of these trends will reverse, and which might stick. Could the pandemic bring a permanent shift in the way people – particularly parents – use their time?

Two of the strongest influences on time use are people’s gender and income. Women spend less time on paid work (like people in low-income households), but correspondingly more time on non-market work like childcare and housework. Resolution Foundation research published next week will show that this gender gap has been closing in recent decades, but it remains big. A key driver is the presence of children in the household: men’s and women’s schedules look relatively similar pre-kids, but diverge a lot when kids arrive, while the gender gap for those without children remains much smaller.

Gender gaps in childcare time have narrowed in recent years, partly thanks to the wider use of formal childcare outside the home. At a stroke, the lockdown closed down most such childcare, like nurseries and schools. These services will be slow to reopen. Could this push back the equalisation in the division of domestic labour between men and women? There is reason to believe that it might.

New data has emerged in recent weeks that starts to show how parents’ time use has changed. Research by King’s College and Ipsos MORI found that, while mothers and fathers were equally likely to have upped their childcare time during lockdown, mothers were still spending two hours per day longer on it than fathers (seven hours versus five). Data collected a few weeks earlier found a similar gap, on a different measure: mothers working from home were spending more than 3.5 hours per day on childcare during the lockdown, over an hour more than fathers were (a larger gender gap than in normal times). Other data from early May suggests that the difference between mothers’ and fathers’ schedules has grown compared to before the coronavirus crisis. But neither these datasets, nor the new Office for National Statistics time use data collected in late March and early April, pinpoints the differential effects by gender of a lack of formal childcare. For that we have to turn back to slightly older but better-quality data, from the 2014-15 UK Time Use Survey.

The pre-crisis data gives a detailed insight into parents’ activities at 10-minute intervals during the day. By focusing on the amount of time parents of children aged under five spend with their children, and separating those who use formal childcare from those who do not, we can see that – unsurprisingly – those who out-source childcare tend to spend less time with their kids. More important is the differential impact by gender: when comparing parents who use formal childcare with those who do not (Figure 1), the increase in time spent with kids during normal working hours is bigger for women (1 hour 18 minutes per day between 9am and 5pm) than it is for men (1 hour 6 minutes). This suggests that, all things equal, simply removing the option of outsourcing childcare during the day would add more to the workload of mothers than fathers. The evidence from Germany tells a similar story. 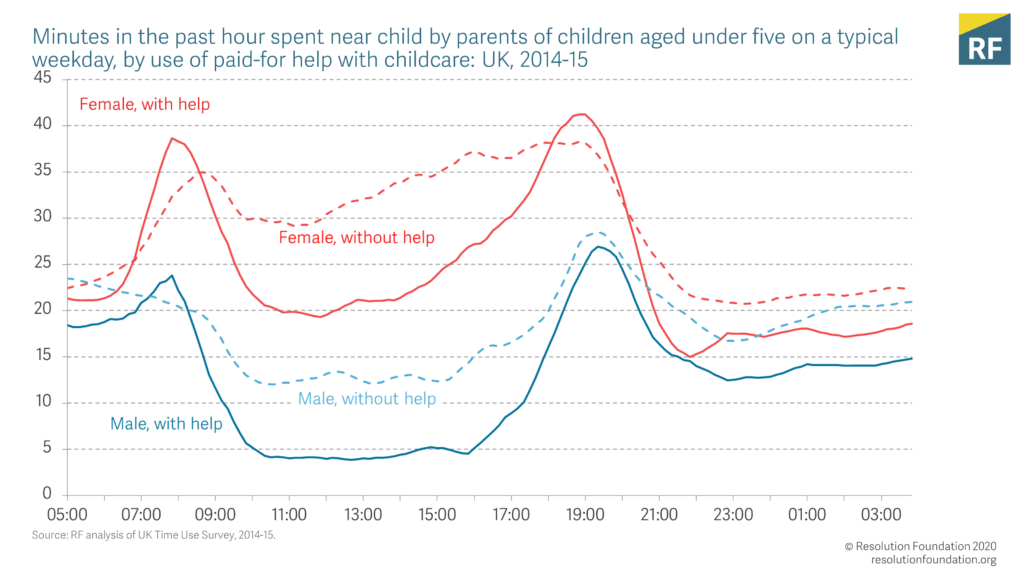 The lockdown has affected parents’ time use more broadly than through the loss of formal childcare, too. Initial forecasts suggested that this crisis might be unusual in hitting hardest in industries with predominantly female (and young, and low-paid) workforces, which would give more mothers than fathers extra time to look after kids. But actual data collected during the lockdown has shown that the employment impact of the crisis has in fact been gender-neutral so far, while Resolution Foundation survey data even suggested that women are slightly less likely to have had their jobs affected. This is probably because women are more likely to be key workers, and less likely to be self-employed or work in some key sectors badly impacted by the lockdown.

However, Institute for Fiscal Studies research has indicated that while overall employment effects may be neutral across the genders, this is not the case for parents: coupled mothers are more likely to have stopped work during the early phase of lockdown. Added to this will be effects within single-parent families, where a loss of childcare impacts more strongly on parental time use than among couple families, and which are predominantly led by women: single-mother households make up 20.3 per cent of those with dependent children under 15, compared to single-father households making up 3.3 per cent. The fact that there are differential employment effects in this crisis between mothers and fathers – but not such clear ones between men and women overall – suggests that it is the intersection of gender and parenthood that matters, rather than gender itself.

Possibilities for the future division of paid and unpaid work

It is likely, then, that three things are true about childcare under the lockdown, which impact on how parents use their time. First, big gender gaps in childcare, that exist in normal times, have remained or worsened. Second, despite women and men being equally likely to have lost jobs and hours so far, mothers are more likely to have reduced paid work time than fathers are. Third, the shortage of formal childcare is likely to add more to women’s childcare time than men’s. As the country opens up again, these changes bring both risks and opportunities for the cause of gender equality.

A risk is that if the jobs recovery outpaces the availability of formal childcare, then mothers will continue to take on a disproportionate share of the extra time looking after kids. This could embed new norms that move away from the recent trend of gender equalisation within mixed-sex couples. A similar shift could occur if the unemployment rise affects mothers proportionately more than fathers.

There are also opportunities for the crisis to advance gender equality in unpaid work. Claudia Hupkau and Barbara Petrongolo point to two pieces of evidence that norm changes may go in the direction of greater gender equality, despite the initial rise in childcare falling particularly on mothers. First, in households where the father is forced back home by the lockdown, the sudden change of gender role may have a lasting impact. This would be analogous to the WWII-induced shift of more women into the labour market in the USA, eroding fathers’ comparative wage-earning advantage. Second, in some mixed-sex parental couples at least, it is the mother who is more likely to have been working away from home than the father: pre-pandemic data suggests that one-third of mothers of dependent children work in jobs that will have been done away from home during the pandemic, and that 43 per cent of these will have had a partner staying at home. Similarly, just over a third of mothers of dependent children are likely to have stayed at home alongside a partner doing the same, perhaps leading to a new division of labour. For these groups of households, at least, the crisis may embed new gender divisions of non-market work. Other progressive possibilities exist, for example that a long-run shift to more flexible working removes some of the remaining norms whereby mothers were much more likely to work part time than their male partners.

On the gender division of household work, then, there is some hope that the short-term reinforcement of gender differences may give way to a more egalitarian future. Much is uncertain, however, and the path of school and nursery reopenings, office reopenings and job losses over the next few months will determine how the division of paid and unpaid work across parents evolves in the decades to come.