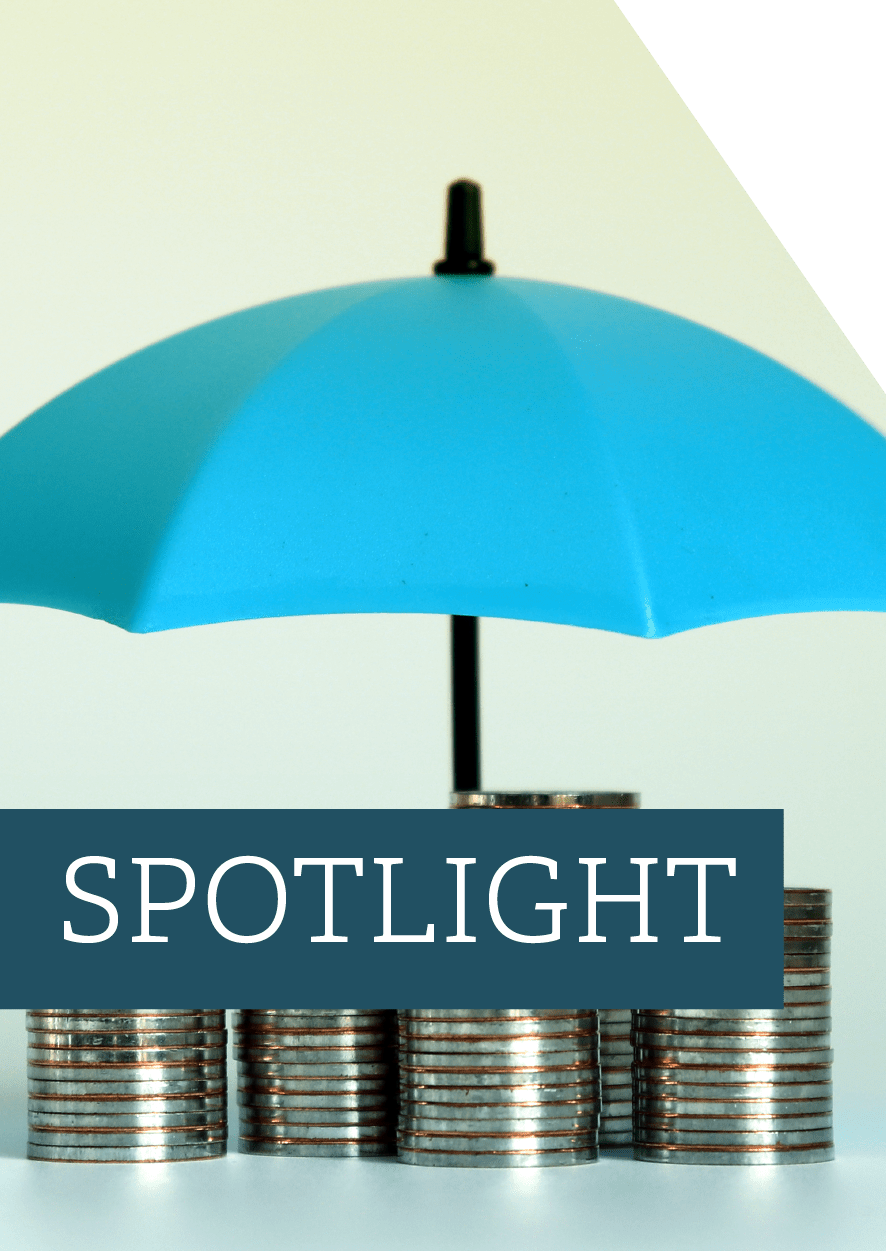 Today’s release of data from the Wealth and Assets Survey (WAS) gives us a key insight into the financial position of families on the eve of the pandemic. It shows a picture of steady increases in aggregate wealth with households’ net worth standing at £15.2 trillion before the onset of Covid-19. Much is written about the unequal distribution of wealth, but today’s data showed that relative inequality (as measured by the Gini coefficient) appears to have been relatively stable – or even falling slightly – in recent years.

But that doesn’t mean there is nothing to worry about here. The wealthiest 10 per cent owned 43 per cent of the overall wealth ‘pie’, ten times the amount owned by the bottom 40 per cent of households. Indeed, the absolute gaps in wealth remain high with the average total wealth of the richest families (top decile) £2.3 million larger than the average wealth of a household around the middle (fifth decile). In addition, regional and ethnic wealth inequalities remain stubbornly in place.

These differences matter for a host of reasons, not least because wealth is a key determinant of whether households can weather unexpected shocks and because they affect living standards directly. Looking ahead, all this came before the sharp increases in wealth during the pandemic which will have exacerbated these issues. All this means addressing post-pandemic wealth differences should be a key priority for policy makers.

Despite being a crucial factor for living standards, new data about the size and distribution of wealth in the Great Britain is a rarity. So today’s ONS release is important as it provides a comprehensive snapshot of the state of household finances in the run up to the pandemic. This spotlight provides a rundown of the ten key takeaways from the new data.

1. The growth in total wealth slowed on the eve of the pandemic (but is likely to have re-acclerated during it)

The past 50 years have seen startling increases in wealth. In the 1970s the amount of wealth held by households in Britain was around three times national income, by 2016-18 this figure had reached close to seven times. However, between 2016-18 and 2018-20 today’s data shows aggregate household total wealth rose by ‘just’ £500 billion to reach £15.2 trillion. While this still remains many multiples of national income, it in fact represents a small decline in the relative size of wealth which now stands at 6.7 times the size of UK GDP. This decline in the rate at which wealth grew to the eve of the pandemic is likely, however, to have reversed over the past two years. This is because asset prices have defied historical precedent and risen rapidly during the pandemic. Indeed, timelier estimates included in the national accounts suggest that wealth stood at 7.6 times GDP by the end of 2020.

2. But taxes on wealth have not kept pace

But as shown in Figure 1, while the scale of wealth has grown markedly over the past century, our tax system has failed to catch up. Tax take from wealth-related charges has remained stubbornly flat in recent decades in the face of the huge rise in the amount of wealth held by households. A key driver of this wedge has been inflation-beating house price growth which has led to large increases in the value of main residences: a windfall that has remained untaxed. (We took a closer look at how the tax system could be reformed to capture more revenues from this source of wealth in a recent briefing.)

Figure 1: The rapid growth in wealth relative to national income faltered in 2018-20 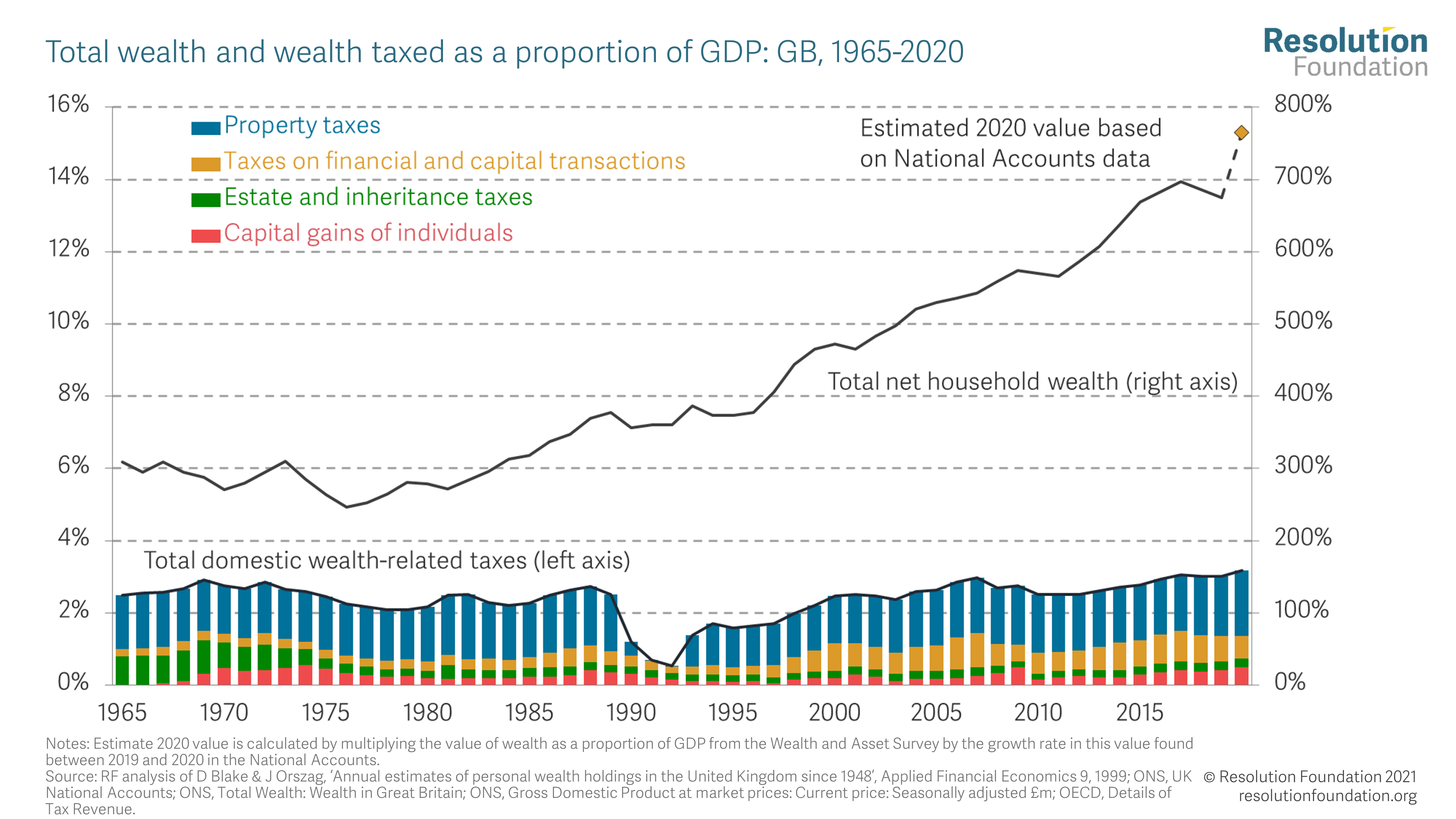 Although a lot is said about how unequally distributed wealth is, today’s data paints a picture of stable relative inequality. A key measure of the level of inequality is the ‘Gini’ coefficient, which ranges from 0 to 1 to capture how equitably wealth is shared in a nation: 0 is perfect equality and 1 is complete inequality (all wealth is owned by one person). On this measure, total wealth inequality stands at 0.62. As we would expect, this is substantially higher than income inequality (measured as 0.36 in 2020). But it has been stable over the last 14 years, and actually declined slightly from 0.63 in 2016-2018.

4. …but, importantly, absolute wealth gaps are continuing to grow

While relative wealth inequality appears unchanged, absolute wealth gaps (that is, those in money terms) continue to grow. The real (inflation-adjusted) gap between average household wealth among high-wealth households in the top wealth decile and those in the middle decile has grown by a further £56k from 2016-18 to 2018-2020 (or £400k since 2006-08), reaching almost £2.3 million. In today’s economy, wealth has played a much larger role in determining household living standards, and was a crucial resource in enabling households to weather the disruption to their livelihoods and incomes caused by the pandemic. These wealth gaps are therefore an important measure of how financially resilient British households were on the even of the pandemic – the picture they paint is a troubling one with the poorest households falling further behind the richest.

Figure 2: Wealth gaps between the richest and the middle continue to grow 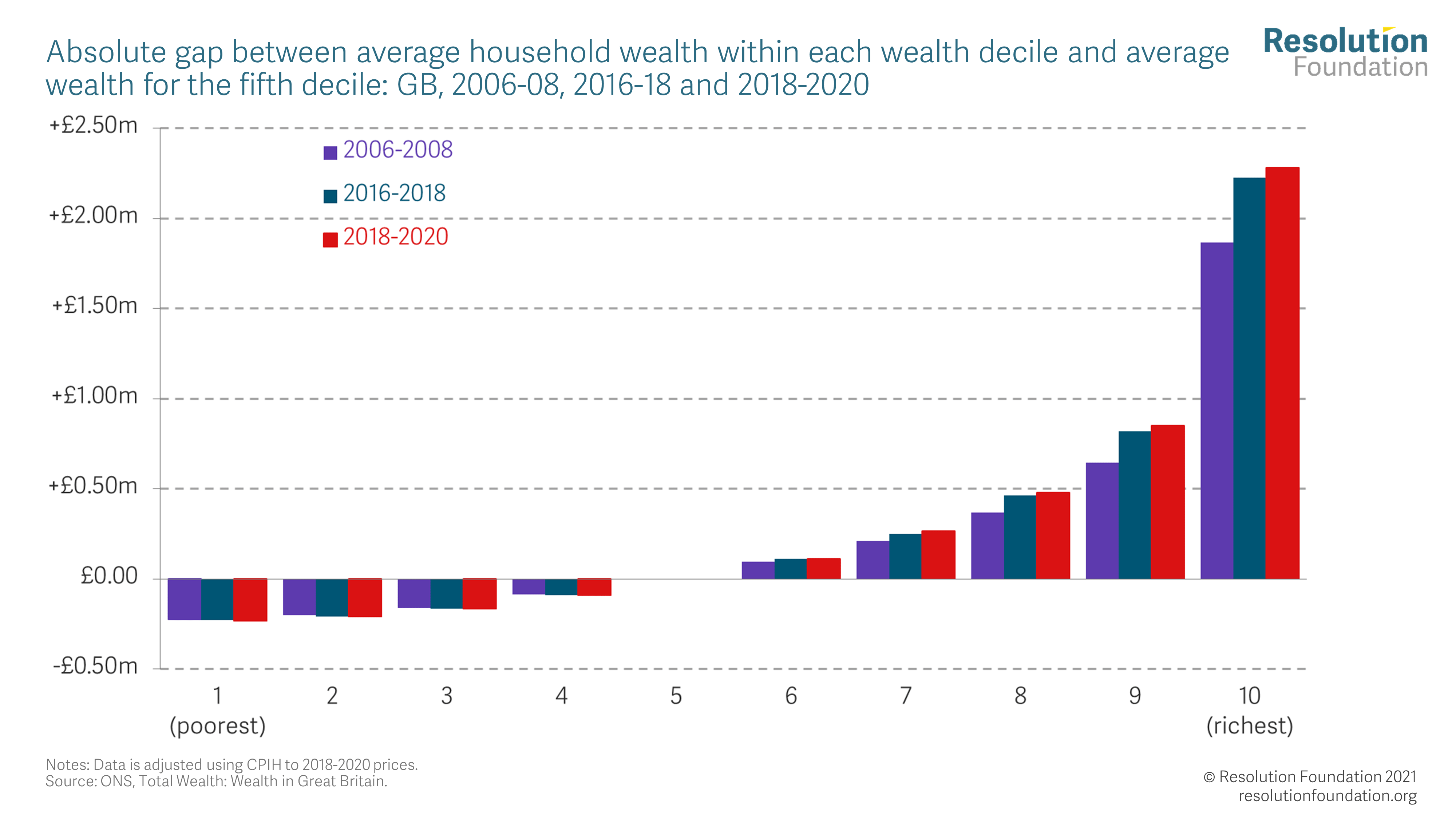 5. Pensions continue to be the dominant type of wealth held by households

Looking into the underlying portfolios of households, the largest single component of household wealth is private pension holdings. Since 2006-08 pensions have grown from representing 34 per cent of total aggregate wealth to 42 per cent in 2018-2020. In real terms this represents an increase in pension wealth of almost £70k on average for households in the UK. This growth in the importance of pensions is accounted for by three key factors: more households having private pensions due to auto-enrolment; pension valuation changes as declining interest boosts the implicit value of defined benefit schemes; and rising longevity meaning pension savings have concomitantly increased.

Figure 3: Pensions are the dominant form of household wealth 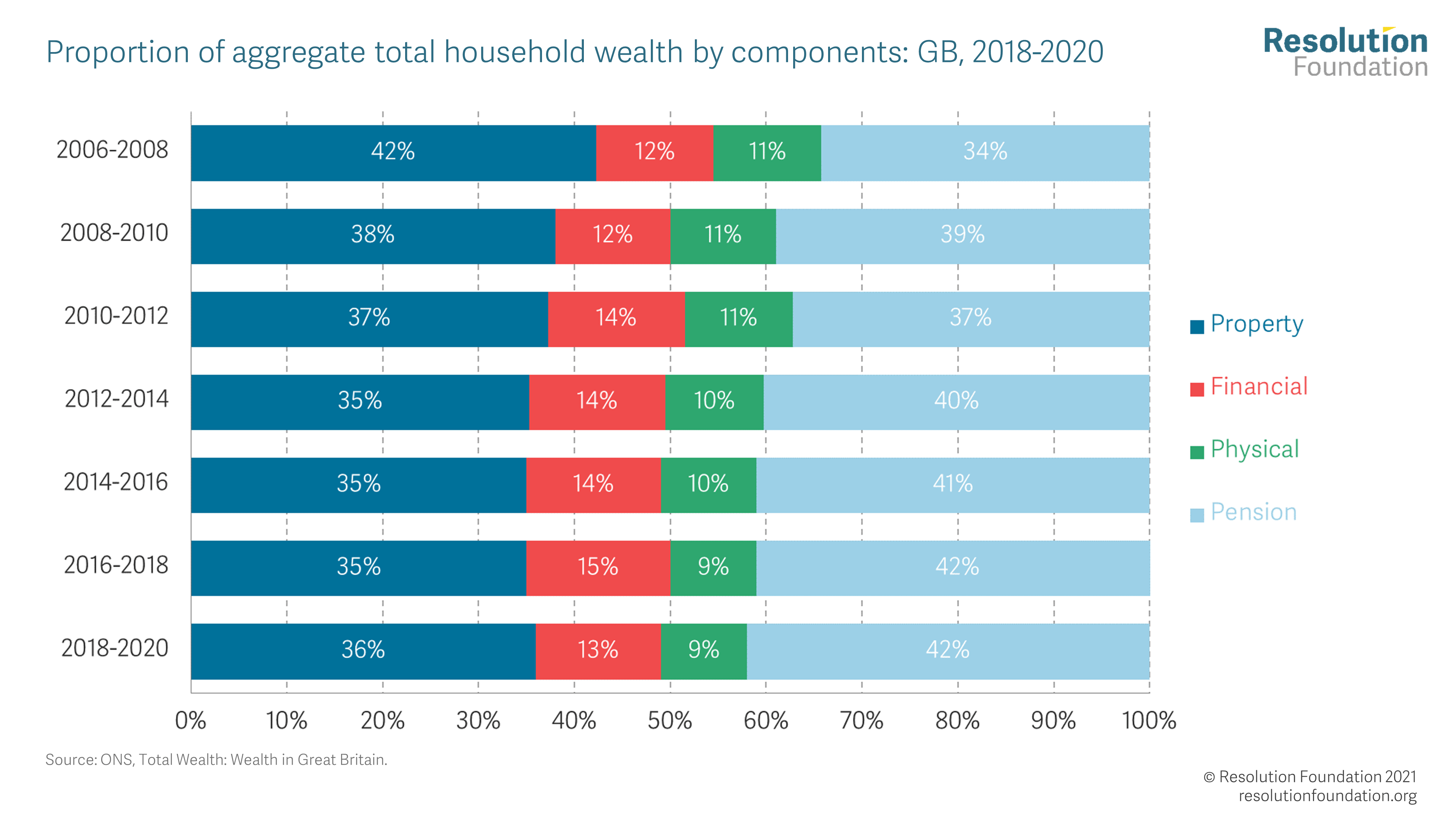 Household wealth acts as a buffer – reducing the need to cut spending in the face of an unexpected fall in income. On the eve of the pandemic the data suggests that there had been some improvement on this margin, with the median household in the lowest equivalised income decile having seen a real terms increase of roughly £37k in their wealth holdings since 2010-2012 (a near doubling). However, worryingly wealth holdings of the very poorest (those in the 25th percentile of the lowest decile) have fallen in real terms since 2010-2012. Therefore, the poorest remained the most exposed to the negative consequences of falling incomes on the eve of the pandemic.

Figure 4: Wealth among lower earners has increased in recent years but remain low 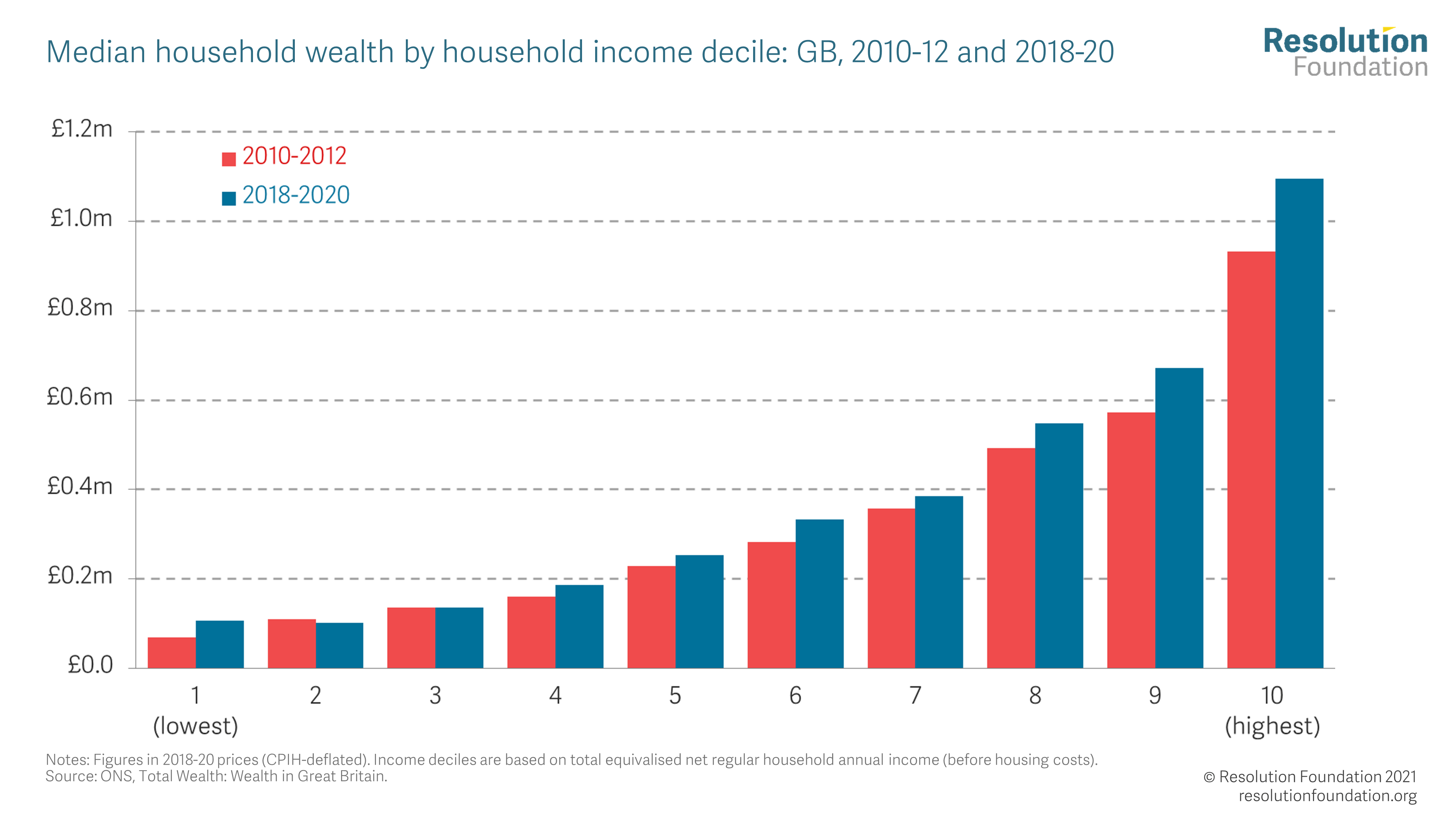 7. Regional gaps have been widening…

While wealth has grown substantially from 2006-08 to 2018-20 the experience has been decidedly different for households in different regions. Median household wealth in the North East, East Midlands, Yorkshire, and in Wales remains lower in real terms that it was in 2006-08 prior to the financial crisis. By contrast, wealth has increased sharply in the South East and in London – driven by house prices and in the South East by a substantial increase in total pension assets.

Figure 5: The South East has pulled away from other regions 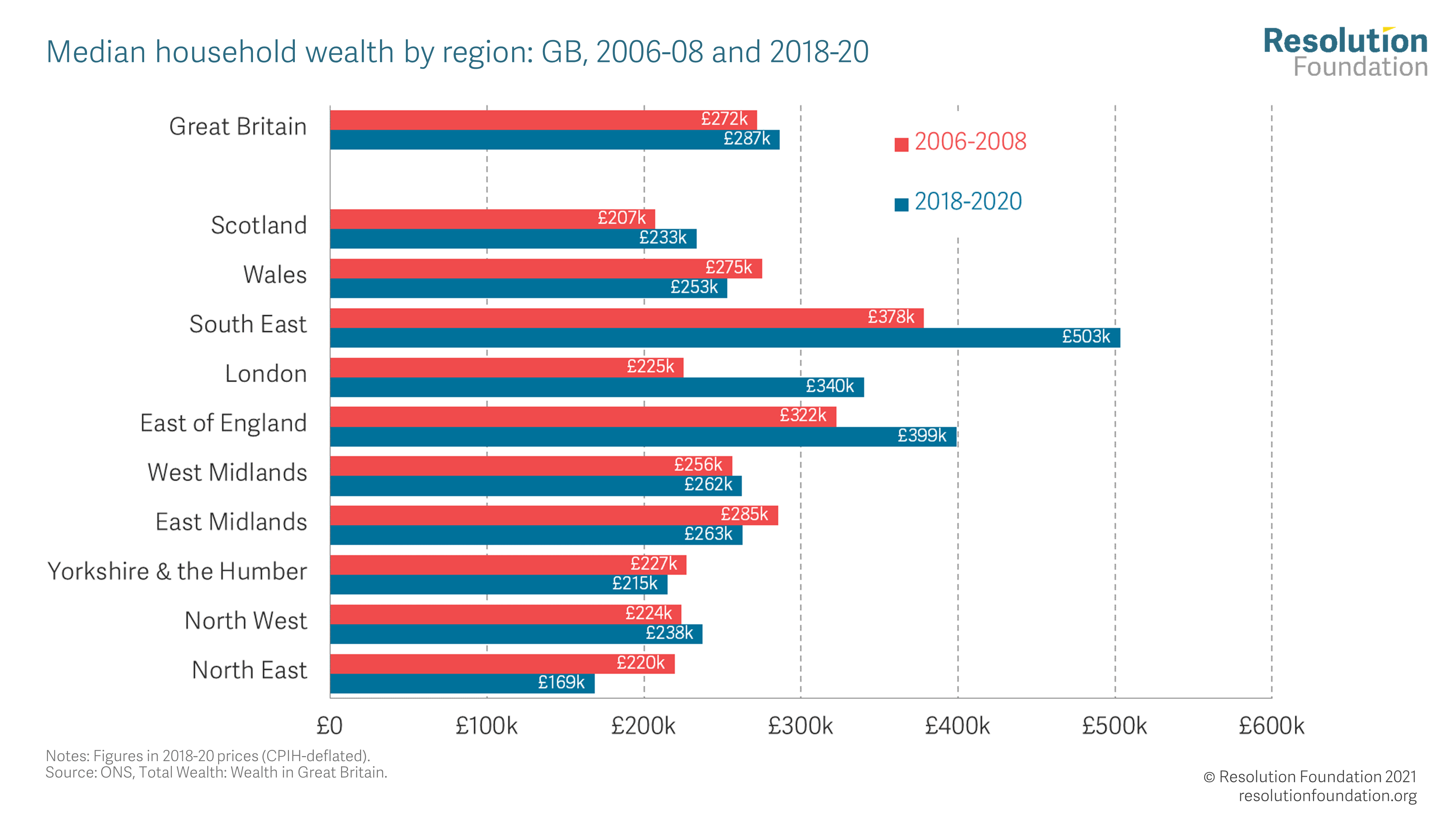 8. …but inequality in London is higher than elsewhere

Higher wealth in London has not benefited everyone. Looking at wealth at the bottom 25th percentile regionally, London has the lowest wealth holdings (£32k). While it is true that London is somewhere with a large number of high-wealth individuals, wealth inequality within the capital is higher than elsewhere.

As people age they naturally build up wealth over their working life, before running down this wealth in retirement to support their living standards. The wealth gap between the youngest and the oldest has however been increasing. In 2006-08 43 per cent of individuals aged 55-64 had wealth over £500k, with this falling to 25 per cent among those aged over 65 as they ran down assets. In 2018-20, however, nearly 58 per cent of individuals ages 55-64 had assets of value greater than £500k, and as many as 53 per cent of those aged 65+. Among younger people these increases were far more modest.

The increasing gap reflects the fact that the older generation have been able to accumulate wealth at a far faster pace than the young, accumulating significant gains from passively held and untaxed property, and gaining pension wealth at a faster rate.

Figure 6: Older people have seen the largest rise in wealth in recent years 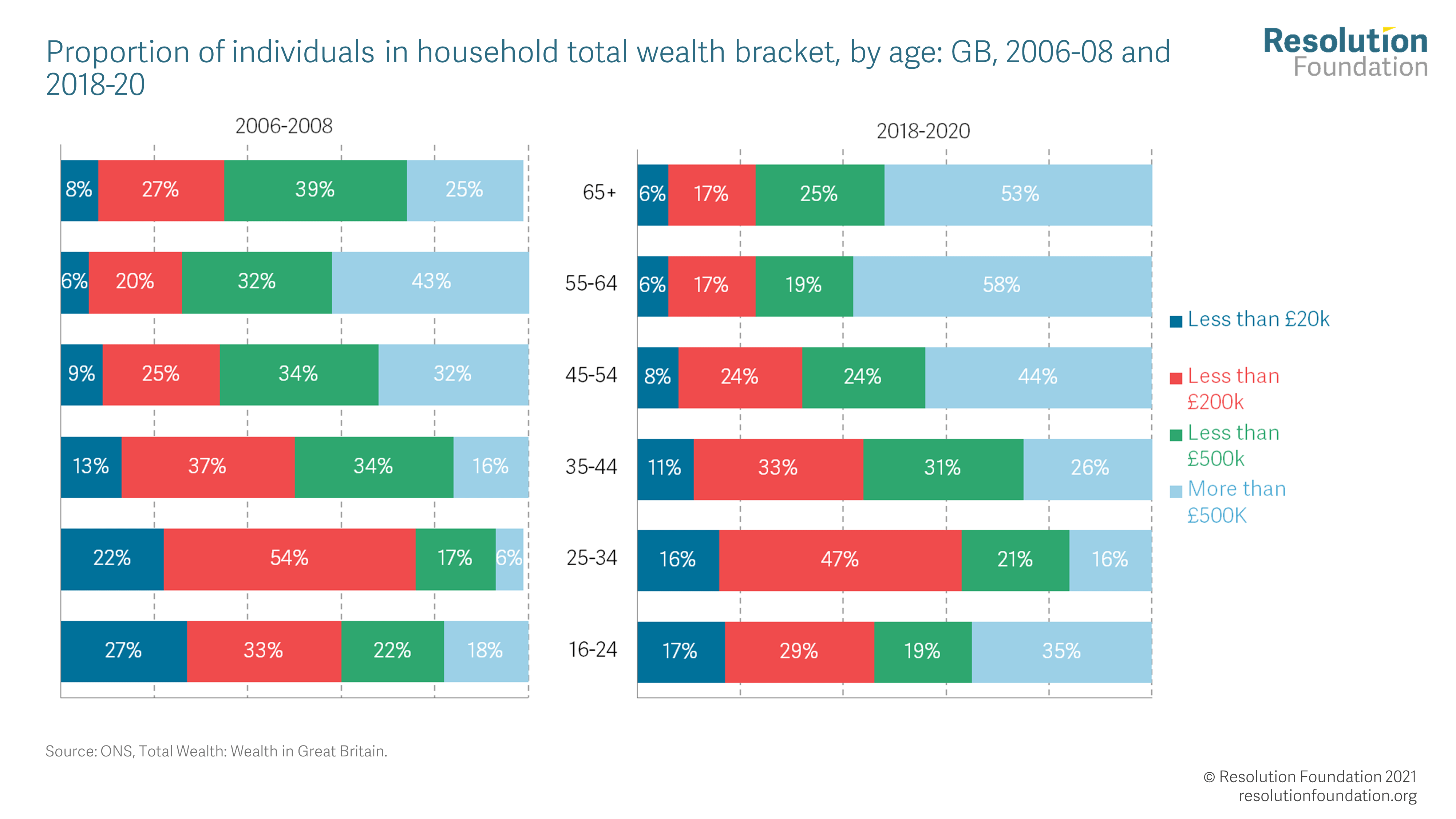 One key area in which inequalities have remained high and appear not to have markedly improved is the distribution of wealth by ethnicity. Figure 7 shows median household wealth for an individual of each ethnicity as a proportion of the median household wealth for a person of White ethnicity. In the decade since 2010-2012 little progress has been made in this area, with the median wealth of people of black ethnicity decreasing from 16 per cent of that held by their white counterparts to 12 per cent in 2018-2020. Bangladeshi households saw a similar decrease from 8 per cent to 4 per cent. These numbers will to some extent capture the impacts of occupation, education levels, and other socioeconomic factors.

The ONS has, however, undertaken analysis to try and control for these observable features. It shows that, even when these factors are controlled for, people of Black African, Pakistani, Indian and Other Asian ethnicities all have statistically significant lower levels of wealth than those of White British ethnicity. So while Britain is becoming wealthier there remains much to do to ensure that this wealth is felt by all. 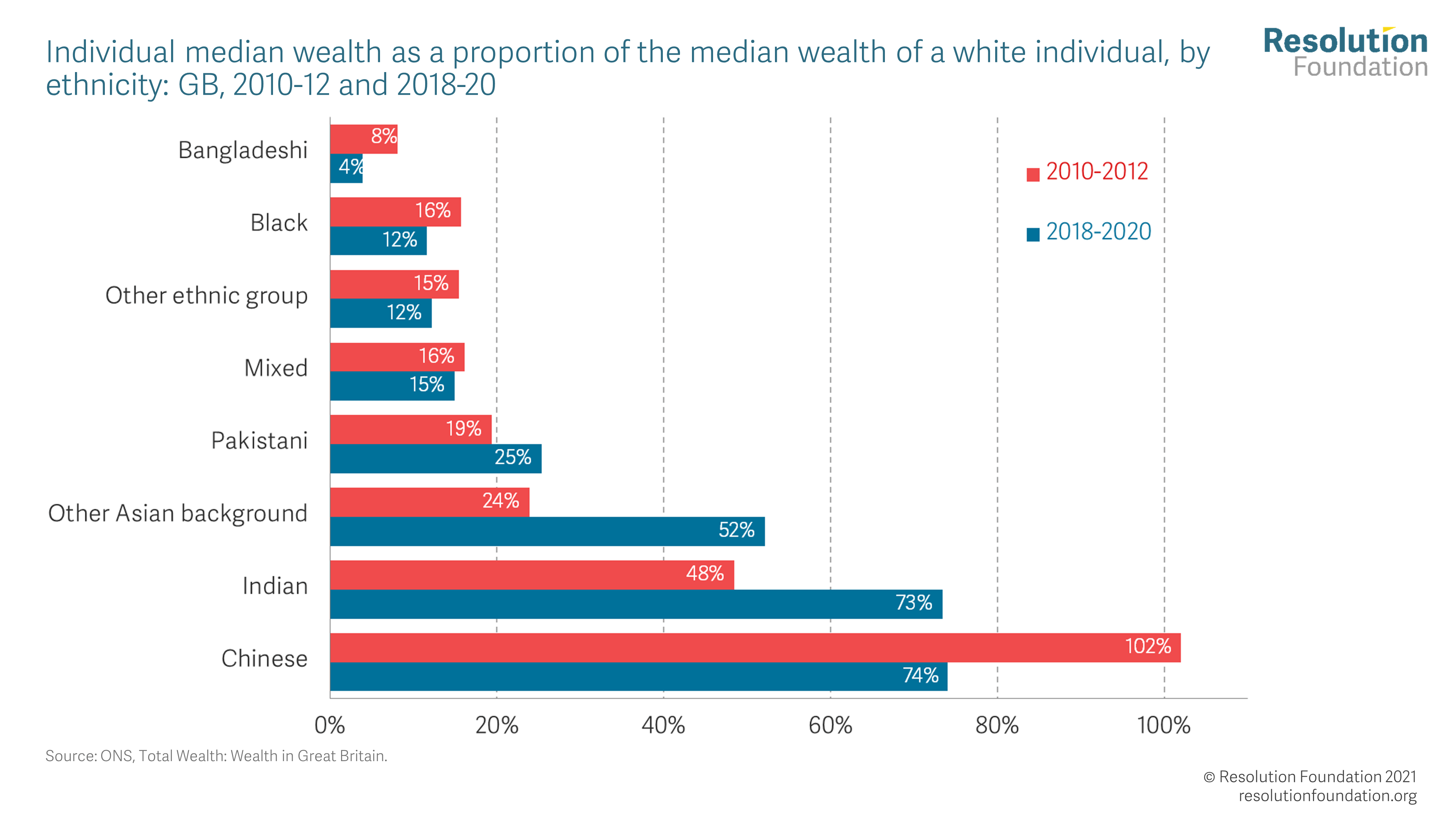