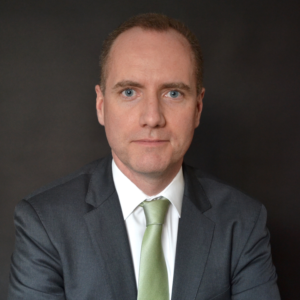 Today the OBR published its second Fiscal Risks Report, a comprehensive assessment of all the things that could go wrong with the UK’s public finances over the next 50 years. And it is a summer blockbuster – topping out at 293 pages in total. Fiscal risk analysis is the new cutting edge in fiscal policymaking, promoted by institutions like the IMF and OECD in the wake of the global financial crisis, which uncovered a broad array of hitherto unknown threats to the public finances of advanced economies.

The UK’s first Fiscal Risks Report, published in July 2017, provided a hefty (313 page) counterweight to the “end of austerity” talk that followed the 2017 General Election result. It also spurred a flurry of activity within the Treasury to tackle as many of the 57 risks highlighted by the OBR as they could. The fruits of the Treasury’s labours, Managing Fiscal Risks which came out in July of last year, made the case for keeping government debt on a downward trajectory, and announced an array of other specific measures to increase the country’s fiscal resilience to the next economic shock.  And, as Resolution Foundation research published this week suggested, the next recession could be just around the corner.

The OBR’s second Fiscal Risks Report is no less salient on the big questions facing the country, and offers interesting insights into the fiscal dilemmas facing the next Prime Minister and his Chancellor. The most timely and interesting ones are on the potential fiscal consequences of three grand challenges for the UK over the next decade: Brexit, climate change, and debt.

Halloween 2019: A Nightmare for the Public Finances?

On Brexit, the OBR has released a remake of its terrifying 2017 “fiscal stress test”. This time it has a distinct Halloween 2019 flavour, based on one of the No Deal scenarios included in the IMF’s April 2019 World Economic Outlook. Under this scenario, the sudden imposition of tariff and non-tariff barriers, and end to free movement of labour on 31 October, plunges the UK economy into a year-long recession starting in late 2019. Business investment falls by 8 per cent in 2020, unemployment rises to 5 per cent in the same year, house prices tumble by nearly 10 per cent over the next three years, and sterling loses a further 5 per cent of its value over the next five years.  However, most of this near-term shock is demand-led and cyclical, and by the beginning of 2024 real GDP is only around 2 per cent lower than the OBR’s latest March 2019 forecast (see Chart 10.2 below, taken directly from the Fiscal Risks Report). The OBR’s No Deal scenario is therefore considerably less terrifying than the Bank of England’s Nightmare on Threadneedle Street “Disorderly No Deal” scenario released in November 2018 which sees a much deeper, supply-driven recession in 2019, with the level of GDP 8 per cent lower by 2024 than their November 2018 Inflation Report forecast. 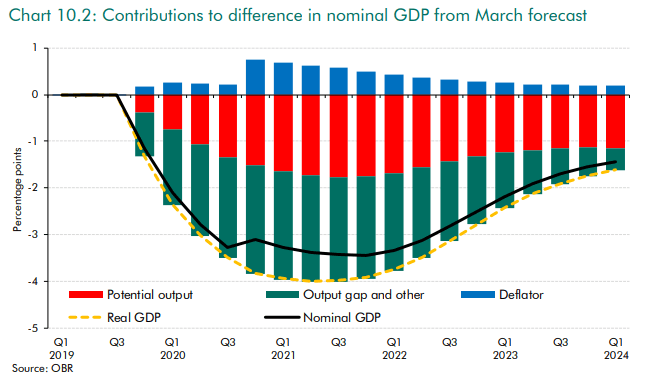 The PG-rated nature of the OBR’s economic scenario implies only a mild fright for the public finances.  Borrowing is £30bn (1 per cent of GDP) higher from 2020-21 onwards, and debt rises to 87 per cent of GDP, but is still falling from 2022-23. This compares to around £70bn of extra borrowing in the aftermath of the financial crisis. The £40bn reduction in domestic tax receipts in 2021-22 is partly offset by an additional £10bn in customs revenue retained in the UK rather than remitted to the continent, and a further £6bn windfall from lower debt interest courtesy of a loosening of monetary policy, rather than the tightening assumed in the Bank’s Disorderly No Deal scenario (see Chart 10.3 below). No Brexit dividend is reaped from the end of our net contribution to the EU Budget with the OBR maintaining its assumption that whatever is saved in Brussels gets spent in Westminster. 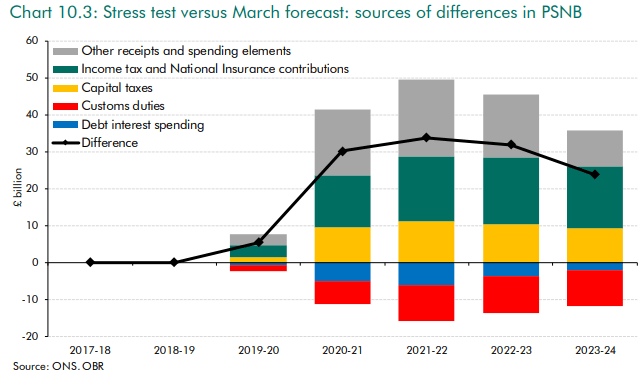 However, because most of the immediate economic shock is a cyclical one to the demand side of the economy as opposed to the immediate supply shock assumed by the Bank, the headroom against the government’s structural deficit target of 2 per cent of GDP in 2020-21 is only £4bn smaller at £22.7bn, compared to the £26.6bn that Philip Hammond bequeathed to his successor. Thanks to the magic of cyclical-adjustment, you really can have your cake and eat it too, at least for a while under this scenario. However, as the supply impact of a No Deal Brexit works its way through the forecast, borrowing ends up 1 per cent of GDP higher than in the OBR’s March 2019 forecast at almost £37bn (around 1.5 per cent of GDP) by 2023-24. Adding either of the Tory Leadership candidates plans for £10bn to £40bn in permanent tax cuts and spending increases could lead to debt rising in every year of the forecast.

The OBR’s contribution to the disaster movie genre comes in the form of a chapter on the fiscal implications of climate change. This one is more of a slow burn than the Brexit shocker. Drawing on the government’s own 2017 Climate Change Risk Assessment and the Bank of England’s work on climate change and the macroeconomy, the OBR point to three different sources of fiscal risks from climate change. There is the cost of doing nothing, which comes in the form of extreme weather events which the 2006 Stern Review estimated could cost the world 0.5-1 per cent of GDP by mid-century. Second, there is the cost of adapting the economy to a different climate though investments in coastal and riverine defences which the Environment Agency estimate would cost around £1 billion a year. Finally, there is the fiscal cost of trying to prevent further climate change through facilitating the transition to a low-carbon economy.  Both the Stern Review and Committee on Climate Change  have produced estimates of around 1-2 per cent of GDP to achieve something close to net zero carbon emissions by 2050, while the Chancellor went for the more eye-catching £1 trillion pounds over the next 30 years. 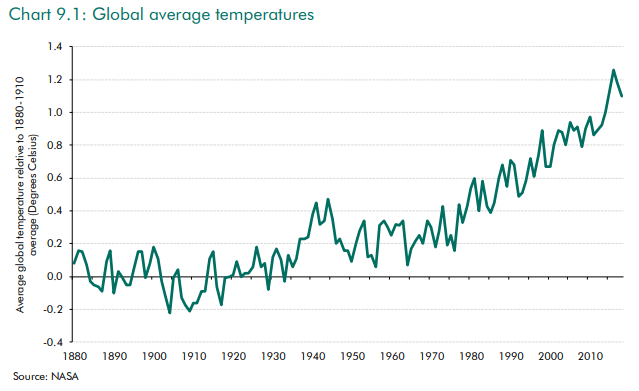 While sobering, it’s worth noting that the £1tn cost of climate change adaptation cited by the Chancellor is less than 2 per cent of the £55tn the government will spend between now and 2050. It’s also just a quarter of the 8 per cent of GDP in fiscal costs associated with an aging society over the next 50 years. As many Hollywood studios have learned to their cost, it’s really hard to make an action movie about climate change…

The final discussion of debt and interest rates is more of a cliff-hanger, with the Treasury looking out from atop the 83 per cent of GDP debt mountain they have built up since 2008 and trying to decide what to do next. At the summit of the next peak are the fiscal doves, like former IMF Chief Economist Olivier Blanchard, encouraging the intrepid climber to make the most of the fair weather to conquer even greater heights. With interest rates at historical lows, they argue that governments should use this window of opportunity to borrow to invest in the growth-enhancing physical and human capital needed to restart productivity growth after the trauma of the crisis. In the valley below are the fiscal hawks, like outgoing Chancellor Philip Hammond, reminding us that the fickle Alpine weather can turn at any moment, and that it’s best to begin the long slow decent to safer ground before the next storm blows in. Indeed, the latest paper by Romer and Romer lends credence to the argument that lower debt enables government to respond more actively with fiscal policy when trouble strikes. The problem is that, other than the 20-year-old EU Stability and Growth Pact limit of 60 per cent of GDP which everyone agrees is no longer the right number, there is no established guideline for what constitutes a “safe” destination for debt these days.

Any one of these challenges would be daunting enough for beleaguered Treasury officials who haven’t had much time to indulge in cinematic escapism over the last three years. The thought that all three will be playing as an epic triple bill over the coming years leaves one hoping they get some rest over the month of August, enjoy a few real summer blockbusters, and come back from their holidays rested and ready.

The Resolution Foundation’s new Macroeconomic Policy Unit will be writing its own script for how policy makers should respond in the event of recession starting with its launch paper this Autumn.